From £26,3859
Distinctive Range Rover Evoque rival has a charm of its own and a surprising amount of ‘big Volvo’ laid-back luxury feel. Few in the class are more worthy of a premium
Open gallery
Close

Germany’s ‘big three’ have had the compact SUV market pretty effectively cornered for most of this decade. When the Range Rover Evoque came along, however, it proved how well an interesting premium alternative could go down among the segment’s buyers – and this year, three other debutants will seek to emulate similar success.

So far, we've had preliminary drives in all of them – the DS 7 Crossback, Jaguar E-Pace and this, the Volvo Volvo XC40 – but have yet to run the road test ruler over any of them in greater detail. If you’re in the market, don’t worry: that last situation will change very soon.

Volvo has proven particularly successful at pitching good-looking alternative SUVs at the German mainstream options of late, and you might even call the XC40 an unlikely improvement in its already rich vein of form. This is a really striking and bold design with a character all of its own, unlike the 'Russian doll’ Audi Q3.

You’ll eventually be able to buy the XC40 with a choice of three turbocharged petrol and two diesel engines, with a choice of two or four driven wheels and effectively in six different trim levels, but the earliest XC40s offered for sale in the UK will be fully loaded 247bhp 2.0-litre T5 AWD petrol, or 187bhp 2.0-litre D4 AWD diesel, First Edition models. Our first taste of the car on UK roads came in one of the diesels.

On paper, it looks a broadly competitive offering, matching the like-for-like BMW X1 on 0-62mph acceleration, although lagging slightly behind it a little bit on claimed fuel economy, CO2 emissions and kerb weight.

The Volvo XC40’s interior does a very commendable job of filtering the carefully constructed, tastefully rich and solid-to-the-touch ambience that you get in Volvo’s Volvo XC90 and Volvo XC60 SUVs down into this tier of the market. Some of the switchgear – on its steering wheel spokes and for its electric windows – isn’t of the grade you find in the bigger sister models, but the plastics coming in still feel tactile and expensive.

Anyone interested in a compact, premium-branded SUV primarily because they want a modern luxury car will find what they’re after in the Volvo XC40 - no question.

Space is very good in the front and the boot is big, but the back seats could be a bit more spacious. Taller adults are left slightly short on knee-room back there and could be better supported by the short, flat rear seat cushions – although only as much, in both respects, as plenty of other cars in the class are guilty of.

On the road, the XC40’s strengths are entirely as you expect to find them in a Volvo: this is a supple, comfortable-riding car that’s obliging and easy to drive. Refinement is great in some respects, with the 2.0-litre diesel engine settling to a particularly quiet background level at a cruise. Our test car’s 20in alloy wheels made for a little bit of noticeable road roar, but nothing intrusive.

Grip levels are assured and body control is likewise, while handling feels wieldy and contained for the most part. However, the Volvo XC40 can feel a bit under-damped at times; the suspension can struggle to keep its body in check laterally over bigger intrusions, setting up a second or two of excitable body fidget and some head toss – although this doesn’t present often.

The Volvo XC40 plays the rich, relaxing, lavishly equipped and nicely cocooning modern Volvo very well, particularly on the motorway slog. It has a likeable, pragmatic, unaffected character that’s at once refreshing among its rivals and should resonate strongly with buyers.

It’s not one of the segment’s more interesting drives and it’s not out to reinvent the Volvo brand, but - with prices on the car starting well below £30,000 - it certainly stands to extend the reach of that brand by quite a way. If you like what Volvo does, there’s no denying how well the XC40 does it. In light of that, we can’t think of many other premium-branded compact SUVs so plainly worth paying a premium for. 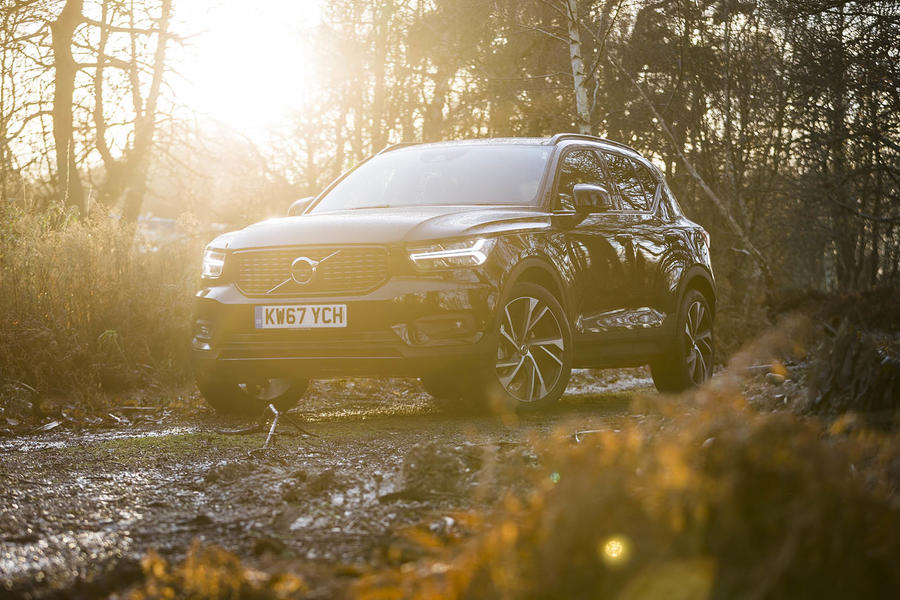 What is it about SUVs??? I'll stick with a decent estate car thanks.

What is it about SUVs??? I'll stick with a decent estate car thanks.

That kicked up windowline on

That kicked up windowline on the rear doors looks really odd, as if they've been slotted in from another vehicle. Its a bit like the plastic rear pillar inserts on the XJ, it really jars with the overall design and you wonder how it made production. Apart from this, the interior looks very nice, but I presume you can easily adjust the climate control on the move without taking your eyes off the road?