How predictable is the new Volvo V60, you wonder? It’s another great-looking Volvo estate, based on a big-Volvo platform, and it’ll go head-to-head with the BMW 3 Series Touring and Mercedes-Benz C-Class Estate, blah, et cetera and so on: how close would we get if we had to phone in the verdict? Not that we would, obviously. Don’t send letters.

Here we are, though, with the fifth model based on Volvo’s Scalable Product Architecture (SPA). With each new one comes with an increasing dose of familiarity. There's nothing wrong with that, mind you – they’re efficient, they’re elegant and, as Volvo discovers how to get the most out the hardware, each is a little better than the last.

It’s three years since Volvo launched the latest Volvo XC90, which was rapidly followed by the Volvo XC60, Volvo S90 and Volvo V90 (and the Volvo XC40, on a smaller platform). So it has been quite busy. Now the V60 estate, then, of which there’ll be an S60 saloon version in the summer, thus rounding out the big SPA range.

Is it the same story as the other SPA cars, then? Certainly in technical terms. The V60 has a mostly steel monocoque, double wishbones and coil springs at the front, an integral link with transverse, composite leaf spring at the rear and transverse front-mounted engines of nothing more than four cylinders or two litres, driving the front wheels through a six-speed manual or eight-speed automatic gearbox. Two different plug-in hybrid versions will come later, as will four-wheel drive. So far, so Volvo.

For now, you can get 148bhp and 187bhp diesels (D3 and D4) and a 247bhp petrol (T5, automatic only), all available in Momentum, Momentum Pro, Inscription and Inscription Pro trim levels. So far, we’ve only driven the D4 Inscription auto, which is priced from £37,600 and officially capable of 69.2mpg, although on the 19in wheels of our test car, those figures increase by £550 and drop by 9.1mpg.

Volvo's consistency doesn't end there. Externally, the V60 could be nothing but a modern Volvo – which is fine. Better than fine, even. The 3 Series/C-Class/Audi A4 Avant class is for thrusting executives, so this “smallest and lightest” of the SPA cars, designer Lisa Reeves tells me, has been sculpted accordingly, with strong belt lines, extreme raked edges to lower grille, “determined, interlocked” headlights and horizontal accents lines to accentuate the car’s width.

“It’s not super muscly, but toned,” Reeves says, because Volvo doesn’t do aggression, per se. Perhaps that’s why, as CEO Håkan Samuelsson tells us, Volvo owners crash 50% less than the average driver and have a 50% better credit rating than average. Honestly, who does this kind of research? 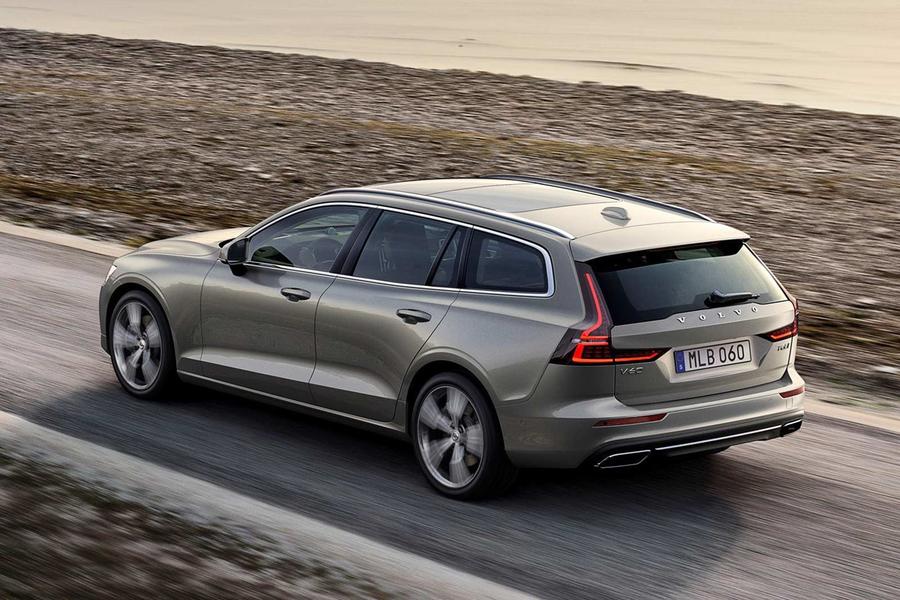 Anyway, the V60 isn't 'aggressive' inside, either. Its doors open to an interior which, while smaller than the Volvo V90’s, feels just as light; there’s 15mm more glass height in the doors and the panoramic sunroof (£1200) is straight off the V90, too. This lets loads of light inside and saves Volvo a few quid by not creating a different one.

You could write what the overall theme is like from your bed, 1200 miles away. It’s a beautiful, minimalist interior made for Scandi-drama detectives to brood in while contemplating how they’ve allowed yet another flipping murder to happen on their patch. It’s clean, crisp and clear – an automotive lapping shoreline of big round stones and driftwood. Most of the infotainment is dealt with by the 9.3in portrait touchscreen – only Tesla does these better – complimented by some necessary buttons that a Tesla would benefit from.

Among this, there are V60-specific details, too. It’s more driver-orientated, they say, so dashboard trim doesn’t extend onto the doors, focusing the mind on the dash, where horizontal bits of wood and strong lines across it take some of the visual bulk out of it. I think that works, and it all feels great. Who does sweeter interiors at this price? I think nobody.

The front seats are big and can sit you lower than in the V90, while the steering wheel has masses of reach. Big digital dials can display a sat-nav map screen between them and comprehensive steering wheel buttons deal with what’s displayed there, including Pilot Assist (radar adaptive cruise control with lane-keeping assist). The central screen displays less immediate things. The transmission tunnel features a conventional gear selector (hybrid models get a diddy glass-effect selector) and oddments storage.

Rear passengers get loads of leg room (the V60's 2872mm wheelbase is 62mm longer than the 3 Series’, plus the transverse engine makes for compact packaging) and really good head room.

And while the rear window of the V90 is raked to take some of the visual bulk out of it, allowing style to win over substance, the V60’s is more upright and traditional. Hence the V60 has the biggest boot in the class, at 529/1441 litres. It should be: at 4.76m, the V60 is longer than the Mercedes-Benz C-Class (4.70m) and 3 Series (4.63m) and around 40mm wider, too. The boot has a flat floor, well-finished sides, luggage hooks in the floor, hooks on the window ledge, an elastic strap on the side and cut-outs right at the back for wide loads. Beyond the Nordic sense of cool, this is a traditional, old-school Volvo.

Likewise, too, is the way it drives – mostly. The SPA themes are all there but, more than that, and by more than a predictable amount, SPA’s progression is apparent. The D4 engine is just a little grumbly at idle, quiet as speeds rise even under acceleration, and good but hampered, at times, by the auto 'box. Possessive over the V60's economy, this is reluctant to downshift. And while you can take control via the gear selector, this is a car that offers a heated steering wheel but not shift paddles. You can set it to a more dynamic setting, but then it can leave the engine spinning too fast at a cruise.

You can affect the suspension setting, too. Unlike on the largest SPA cars, there’s no air suspension option, but the mechanical springs are mated to adjustable dampers – although I doubt there’s a person in the world who will routinely drive around in the firmer mode. 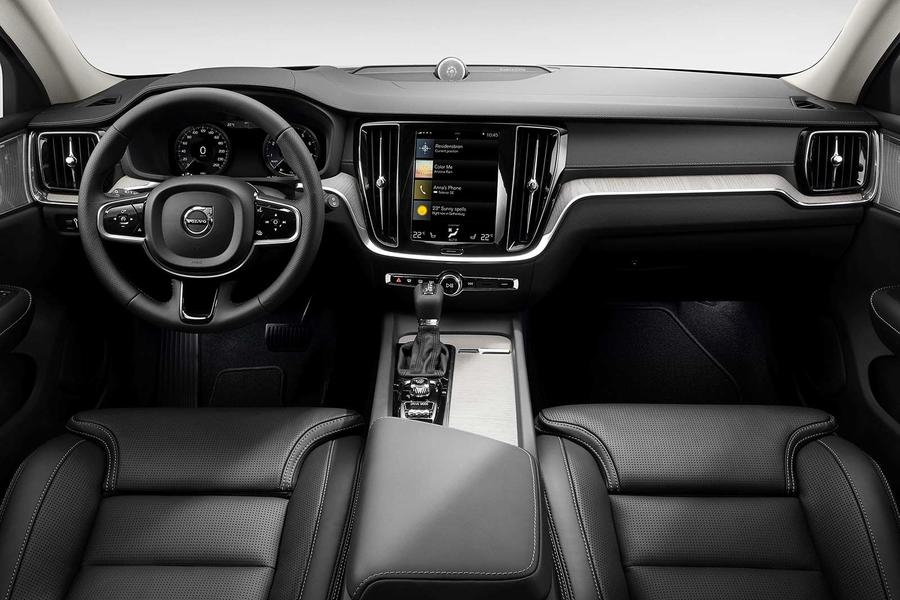 The V60 is a relaxed drive, then, overall. I’d be intrigued to try one on 18in wheels with 235/45 tyres rather than the 235/40 rubber of the 19in rims, but it rides pretty well as it is, steers with 2.4-turn between lock accuracy and exhibits more linear build-up of response than other big Volvos, making it easier and more chilled to steer on twisty roads.

Big Volvos have been getting progressively more comfortable while retaining better and better body control, and here it's the best setting yet: comfortable and controlled. You wouldn’t call the V60 engaging in the same way you would the 3 Series or Jaguar XE, yet at the same time it’s not boring, and there’s capability there if you really ask for it (which you won’t). Plus, it’s free of some of the harshness of ride, poor steering linearity and diesel clatter that afflicted, say, the Volvo XC90 at launch.

I’d want a back-to-back test against the key rivals to be sure, but it feels more comfortable, if less dynamic, than a BMW or Mercedes-Benz. And that’s just dandy if that’s where Volvo wants it to be.

The V60 drives the SPA story notably onwards – best experienced, not phoned in. 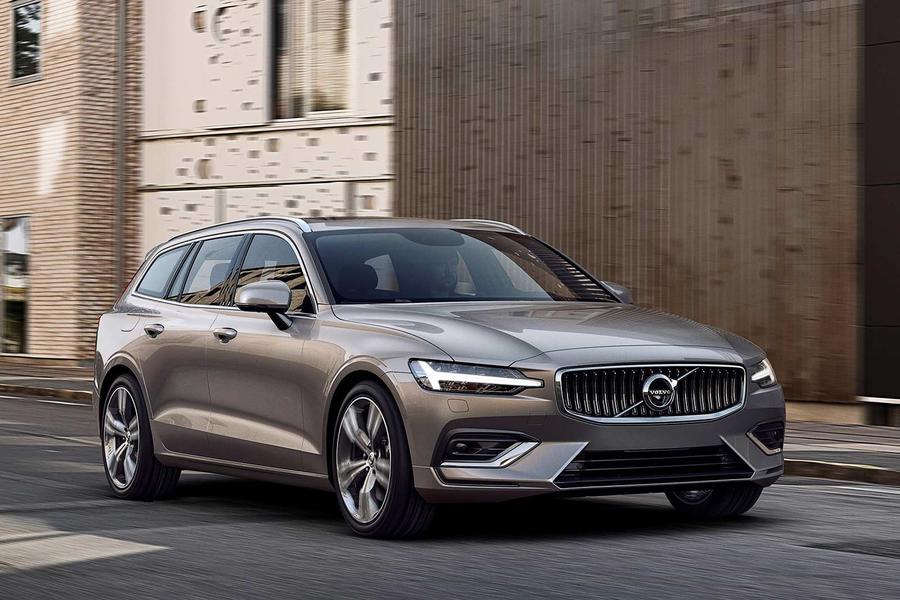 Another 3 Series, A4 and C Class beater from Volvo

Enough said really and it's another car from Volvo whose entire model range now betters their equivalent rivals from Audi, BMW, Mercedes and VW. But then many other manufacturers do too.

Is it me or does the bonnet

Is it me or does the bonnet (like many of the current Volvos) look excessively long, when you consider that all it has is a transverse 2 litre engine under the bonnet?

Good for looks, not for space efficiency though

compared to compact premium wagons ofcourse, A4, 3, C-class, not mainstream wagons which are not direct rivals...

compared to compact premium wagons ofcourse, A4, 3, C-class, not mainstream wagons which are not direct rivals...

If you are going to buy a car based upon quoted boot volume, check out the vehicle first. The Germans who measure boot space using the DIN method can remove everything from the vehicle, so floors, carpets, spear wheels, seatbelt pretensioners, everything and then measure the space by volume. They are also allowed to measure the boot space up to the height of the rear seat - so you put the head rest up and the boot volume goes up - all acceptable ways of measuring volume. Not every manufacture measures boot space in the same way and for some reason the manufactures who are clearly misrepresenting useable space (who is going to take out the carpets in the boot? who?) never get called out in articles. Check out the other car reviews where they show the measured internal dimensions of the boot, the largest number from multiplying width, height and depth is the largest boot size, but unfortunately that is not correlated with the figures produced from the DIN method. Physics is unfortunately a hard beast to get around but it seems automotive journalists are not detail orientated people. Volvo quotes to the window line I believe so could be rather different to its German competitors.