From £36,0408
Share review
The first plug-in hybrid to wear the R badge is a very different beast to the hot VWs that have come before
Share
Open gallery
Close

The performance world is changing, and so is Volkswagen R, as evidenced by the arrival of the Touareg R, the hot sub-brand’s first-ever plug-in hybrid model.

The new range-topping Touareg indirectly replaces the short-lived Touareg V8 TDI – a car that was never officially offered for sale in the UK – becoming the first model in Volkswagen’s flagship SUV line-up to wear the R badge since the memorable 345bhp twin-turbocharged 5.0-litre V10 diesel-powered Touareg R50 was launched in 2007.

It’s not an exclusive Volkswagen R development, though.

The new Touareg R’s petrol-electric driveline is the same as that used in a number of upmarket Volkswagen Group models, including the Porsche Cayenne E-Hybrid, Audi Q7 TFSIe quattro and Bentley Bentayga Hybrid, albeit with some small tweaks aimed at providing the car with its own unique character.

Power comes from a twin-turbocharged 2.9-litre V6 petrol engine developing 335bhp and 332lb ft of torque as well as an electric motor with 134bhp and 295lb ft. Together, they provide a combined system output of 456bhp and 516lb ft.

This is 80bhp and 74lb ft more than the same driveline develops in the altogether milder Touareg eHybrid, which is planned to see UK deliveries at the same time as the Touareg R by the end of 2020.

Drive is sent through a standard eight-speed torque-converter-equipped automatic gearbox with Tiptronic manual shifting capability via steering wheel mounted paddles and a Torsen torque-sensing four-wheel drive system engineered by Audi. The latter is capable of transferring up to 70% of drive to the front wheels or alternatively 80% to the rear wheels depending on prevailing traction.

Energy for the electric motor is supplied by a 14.3kWh lithium ion battery mounted beneath the boot floor. It can be charged either on the run using part of the combustion engine as a generator or via a plug at up to 7.2kW on an AC system, at which Volkswagen claims a charge time of two and a half hours.

Economy figures have yet to be announced, though Volkswagen points to an electric range of up to 29.2 miles on the WLTP test cycle. The top speed in electric mode, meanwhile, is limited to 84mph. 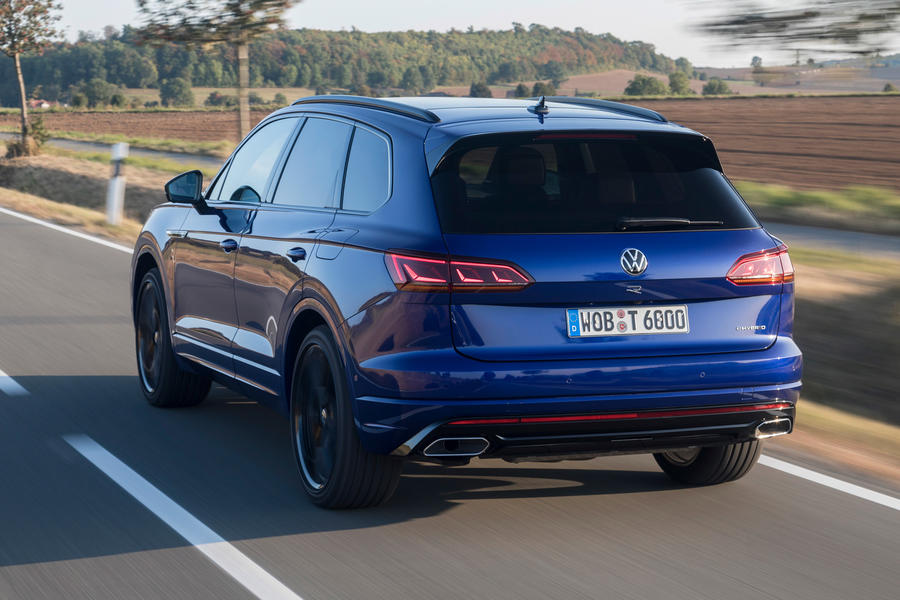 In its default electric mode, the car is supremely quiet and smooth in operation with strong step-off qualities thanks to the instant torque delivered by its electric motor. While the battery capacity is not sufficient to provide it with truly extended zero-emission compatibility, the Touareg R still manages to cover most commutes without the need to rely on the combustion engine.

The electric motor provides all the urgency you’re ever likely to seek in urban driving. When you do go searching for added performance with a probing nudge of the accelerator on more open roads, there is just enough start-up vibration from the petrol engine for you to notice it. However, the acceleration remains quite linear in character without any significant interruption in progress as the two drive sources are combined.

There is no shortage of driving modes, with the driver able to choose from Eco, Comfort, Normal, Sport, Individual, Off-Road and Snow beyond the Electric and Hybrid modes. Keen observers will note that it does without the Race mode of other R models, and there’s a good reason why.

Switching through the various driving modes on a variety of different roads, it doesn’t take long to conclude the emphasis here is less on all-out performance than overall comfort and refinement. At typical motorway speeds, the Touareg R feels quite responsive with strong torque qualities that give it outstanding flexibility and the sort of in-gear acceleration belying its 2533kg kerb weight. But it is no fire-breathing powerhouse, and its exhaust note is extremely subdued by Volkswagen R’s usual standards.

This might confuse some prospective buyers expecting something more in keeping with the earlier Touareg R50. But where sales are concerned, I’m sure the Touareg R will find greater appeal as it is than if it was positioned as a more hardened offering against models from Audi Sport, BMW M and Mercedes-AMG. Its balance between comfort, refinement and performance is just about spot on, making for relaxed progressed, hushed cruising qualities and a good turn of speed when you go looking for it in Hybrid mode.

Volkswagen claims 0-62mph in 5.1sec and a top speed limited to 155mph in hybrid mode. This compares with the 5.7sec and 149mph of the Audi Q7 60 TFSIe quattro, which has the same driveline and combined output of 456bhp and 516lb ft.

When the battery charge runs low, it is possible to charge it to a pre-set level by using the combustion engine as a generator in Eco mode. At the same time, the energy regeneration is also increased, providing an added braking effect when you step off the accelerator along with the usual coasting function, which idles the engine on periods of trailing throttle.

Despite the significant weight brought by its hybrid drivetrain, the Touareg R is suitably agile in Sport mode. However, its dynamic properties are far from the whip-crack standard the R in its name implies in other Volkswagen model ranges. The steering is nicely weighted and quite responsive off dead-centre, while the standard air suspension provides the new SUV with well-controlled body movement during all-out cornering along with a cosseting ride in Comfort mode.

To enable it to maintain a level of off-road prowess and 3.5-tonne towing capacity comparable to its to its petrol and diesel siblings, the new range-topping plug-in hybrid Touareg retains a Torsen four-wheel drive system and can be ordered with an optional Off-Road Package consisting of improved underbody protection and added traction control functions with gravel, mud and sand settings.

Inside, the Touareg’s pleasingly functional cabin is virtually unchanged by the adoption of the hybrid drivetrain. Its highlights include a 12.0in digital cockpit instrument display and 15.0in infotainment system, which together form part of what Volkswagen calls its Innovision Cockpit.

The only telltale changes are new graphics for the digital instruments indicating electric range and the battery’s state of charge as well as additional buttons within the centre console that allows you to switch between the various driving modes without resorting to the alternative commands within the infotainment system.

The packaging of the battery at the rear reduces the boot capacity by 70 litres over more conventionally propelled third-generation Touareg models, though the floor remains flat and at 610 litres it is reasonably commodious. 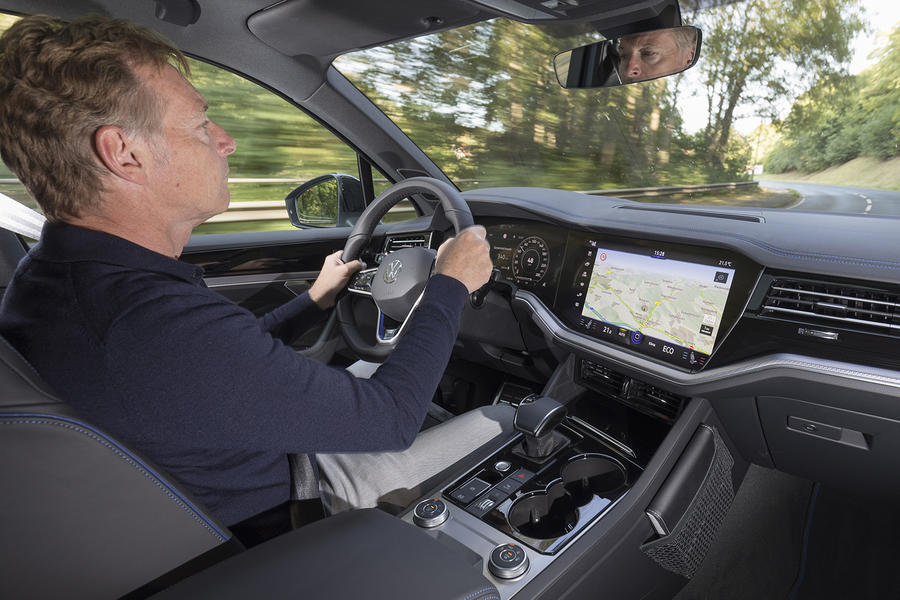 By allowing its usual focus on performance to take a back seat to factors such as comfort and refinement, Volkswagen R has succeeded in boosting the appeal of the Touareg.

The multi-faceted character delivered by the petrol-electric drivetrain of the Touareg R makes it quite compelling to drive, whether silently in electric mode around town, in hybrid mode out on the open road or climbing hills in off-road mode away from the bitumen.

You’ll need easy access to a charger to take full advantage of its zero-emission properties, but otherwise it is a very straightforward car to drive despite its myriad driving modes. What it lacks in pure performance character, it more than makes up for in the breadth of its abilities.

Pricing will be critical to its sales prospects here in the UK, and right now Volkswagen has yet to reveal just where it will be positioned. Our best guess is somewhere between £65,000 and 70,000, which should make it the most expensive serious production Volkswagen model on sale here.

Yes, it’s a very different kind of R model than we’re used to seeing from Volkswagen, but it is one that has its own merits, Porsche drivetrain and all. 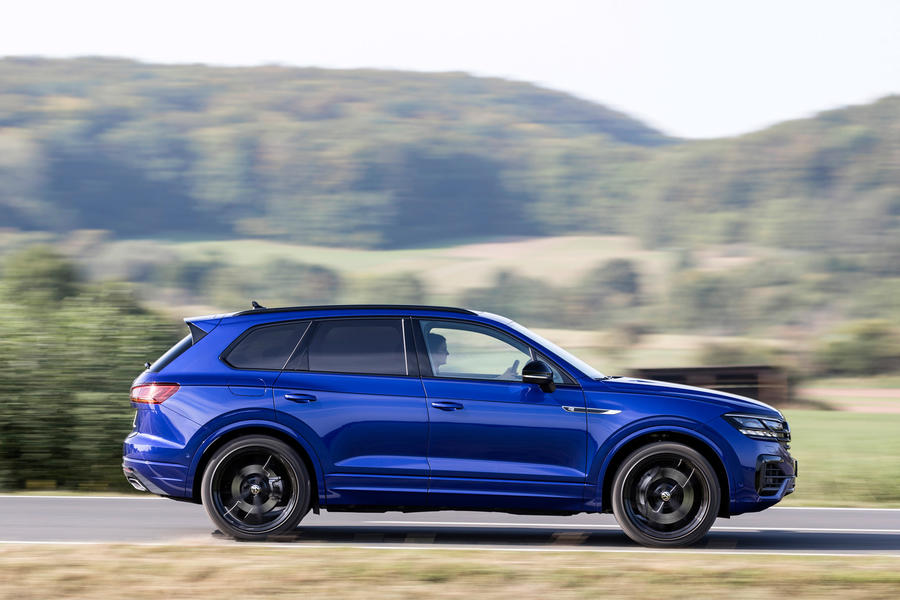 Yep - V10 (it is even in the link) and was truly awesome in this and the Phaeton.  My colleague had one.  I'd borrow it as much as possible.

...you would think Autocar should know this....wouldnt you? Sloppy  reporting.

Gentleman, i think on this occasion it is your reading not the journalism that is sloppy. The article states that the VW Touareg TDI, (that the Touareg R indirectly replaces) was a V8, it doesn't say that the R50 was a V8.

Having said that it normally is Autocar, who don't even spellcheck there articles.

Such a thing as?

Is there such a thing as too much power and torque?, with the combination of ICE and EV the figures for a Vehicle like this a bit broken Pencil, unless you do off roading a lot where torque is your friend, just about any other situation it's needless.

If you can use it then no (tyres, location and passengers allowing)!  However I borrowed a friends Model S P100D.  On my own I was laughing away at every stop and junction.  With the family on board (or when I was not driving) doing lots of acceleration everyone just felt sick!

29 September 2020
Not everybody that wants an R wants a hardcore track-day machine.

Even if it is a VW

That rear 3/4 view is a fine looking thing, a better and less fussy Q5. Maybe it was a rejected Q5 proposal.