6
Half-hearted hot SUV has breadth of ability but not much soul or driver appeal. Unlikely to rank too highly for Touareg buyers, PHEV shoppers or SUV thrill-seekers
Open gallery
Close

Volkswagen’s range of R-badged performance derivatives is currently undergoing a major strategic expansion; something signalled a couple of years ago by the T-Roc R crossover hatchback, and now indicated to even more conspicuous effect by this all-new, range-topping version of the Volkswagen Touareg full-size SUV: the Touareg R eHybrid.

There have been performance-flavoured Touaregs before (most memorably the wonderfully mad V10 TDI diesel-engined ones), but what this new go-faster version really shows is how much more broadly defined the role of the Volkswagen R-branded car may be in years to come than it once was. Broadly enough, that is, that fully electrified options should be expected to become a big part of it sooner rather than later. 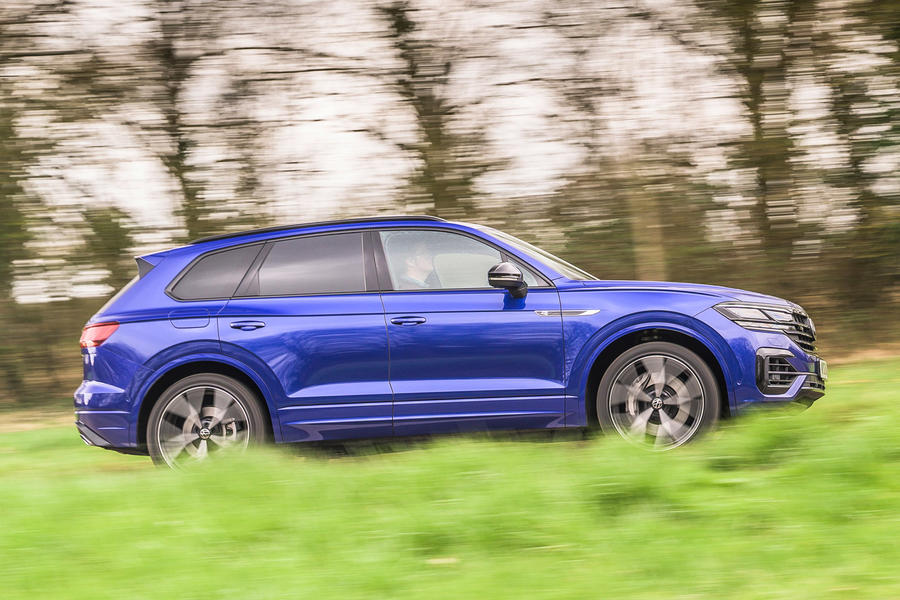 When you stretch a sub-brand like this, you inevitably have to flex and change it in order to accommodate the Arteon R Shooting Brakes, Tiguan R SUVs and everything else you want it to work on in between. That's all fair enough. We're operating at a time when there is more pressure on car makers to be innovative with their extra-profitable performance models than ever before; and the cost of not doing so, in terms of emissions-related fines, could be huge. I get all that. Even so, with this Touareg I wonder if Wolfsburg has stretched the R brand a bit too far, forgetting about the core driver appeal that it ought to stand for wherever it appears.

All the peripheral R-brand stuff appears to have been thought about. The Touareg R gets 22in wheels as standard, as well as the obligatory racy-looking bumpers, sills, air intakes and roof spoiler. It gets VW’s darkened exterior body trim too, and the trademark Lapiz Blue paintwork you’ll recognise from so many Golf Rs over the years.

But under the bonnet, the car has less to pique your interest. It’s powered by the same pairing of 3.0-litre turbocharged V6 engine and 134bhp electric motor as has driven the Porsche Cayenne E-Hybrid for the past few years. The Bentley Bentayga Hybrid and Audi Q7 60 TFSIe use the same hybrid set-up, effectively. Except for Porsche, Audi and Bentley, this is a lower-level powertrain with a less ambitious brief to fulfil than it has in this Touareg. In a range-topping option, it isn’t quite the dominant presence it would need to be to really get your attention.

Making a combined 456bhp and more than 500lb ft of torque, the powertrain’s got reasonable performance credentials on paper. In practice, though, the Touareg R feels fast enough in outright terms but not that eager or effusive; and while the electric motor does add plenty of instant torque, the car doesn’t feel as urgent or responsive in the way it picks up from low speed as you might like. Every bit of urge it makes is routed through an eight-speed automatic gearbox and a Torsen centre diff that can feel slightly cloying in their style of delivery at times. They seem to need a split second to think every time you ask for forward impetus particularly when moving the car away from stationary, where other plug-in SUVs would have been off down the road already with a more abiding sense of both smoothness and potency.

As for what this electrified powertrain can do, the Touareg’s running efficiency and real-world carbon emissions: that’s also something vulnerable to criticism. The Touareg R uses a drive battery with 14.3kWh of usable capacity, which costs it a little bit of boot space compared with its sister models. But that’s not big enough to cut much mustard in 2021 in a PHEV SUV niche in which both BMW and Mercedes now offer more than 20kWh of the stuff. The Touareg R’s good for only about 20 miles of electric running after a full charge. Once the battery’s spent, it will return between 28mpg and 30mpg on a longer run but, unlike some of the latest-to-market plug-in SUVs, it can’t be DC rapid-charged while you’re out and about either.

The car’s chassis has plenty of grip, and good low-speed agility and wieldiness. Body control is reasonable when tackling a testing road for what is a two-and-a-half-tonne car. Even in Sport mode, though, the outright handling precision, cornering balance, control feedback and general potential for driver engagement that you expect of an R-branded performance car are notable by their absence in this one.

The Touareg R is comfortable enough at other times, and is generally quite well-isolated and plush-feeling. But the 22in wheels of our test car made for ride quality that seemed clunkier and fussier than necessary, diminishing its overall sense of dynamic adaptability. 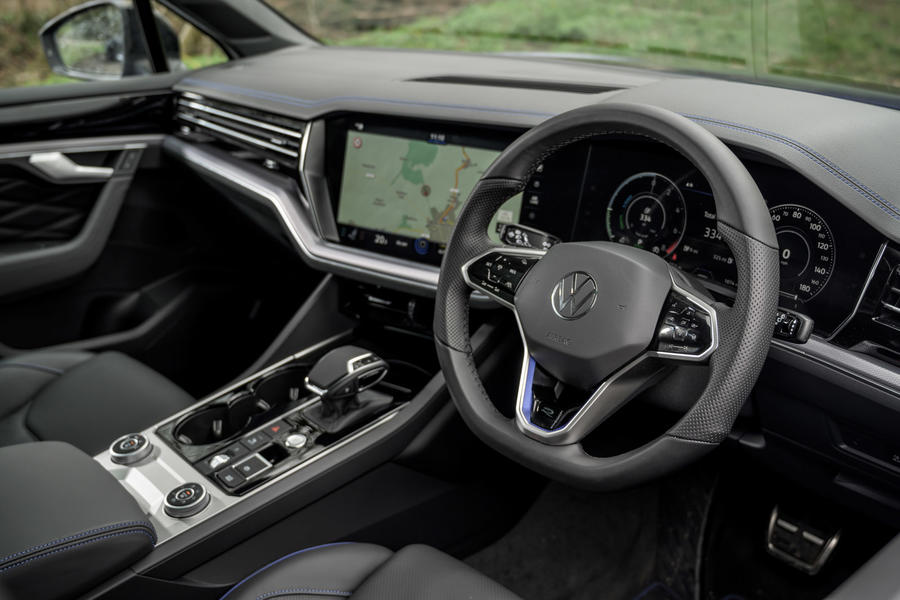 This is a strange, half-hearted kind of fast SUV; one that looks like it might be a bit of fun, but doesn’t really drive like it.

Underneath the flashy garb, it’s still a Touareg, which means it’s a proper 4x4 with great capability, on-board technology and safety credentials; and that’s worth something. It's not as ambitiously priced as some fast SUVs, either; and it has full-time four-wheel drive, and will also tow up to 3.5 tonnes where some of its rivals are limited to more than tonne less.

But the cheaper diesel Touaregs do all of that, too. This performance billing certainly doesn’t seem to suit a big VW that remains at its best when at its most understated and unpretentious. 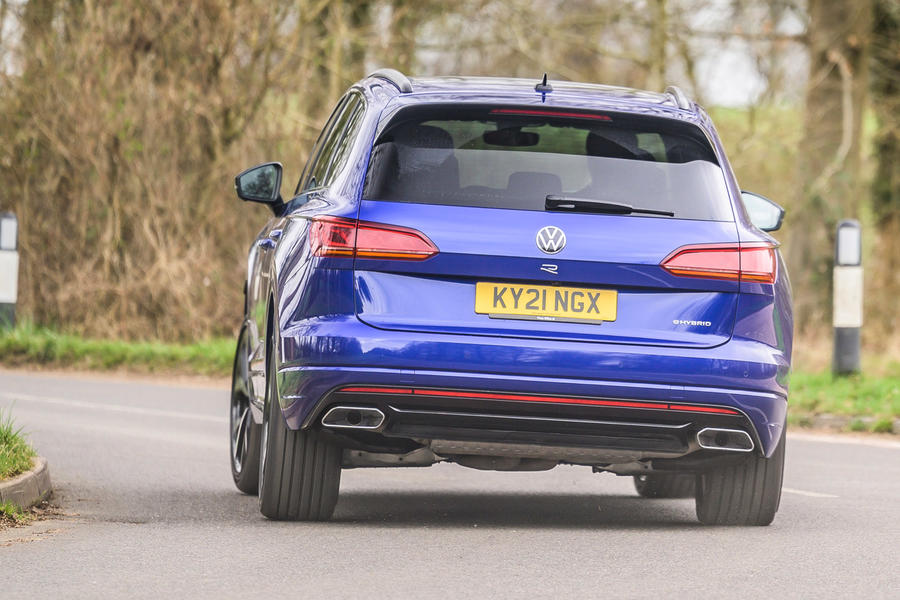 Another phev fail, 14kwh to do 20 miles, what private buyer, and most company ones, would get one in their right mind. Tax dogers only need apply, then reject.

You will see most of these parked up for V W headquaters management or at dealers in parking lot  signed manager. Who will buys this utterly poor example of over hyped awful looking truck. I might next year as it will lose so much money they will be going for £25.99 + vat !