From £19,6308
Do 187bhp and 4Motion all-wheel drive make the current top-spec T-Roc exciting to drive?
Close

Volkswagen has ambitions of becoming one of the world’s largest producers of SUVs, so it is trying to leave no stone unturned by developing a model to fill every category in the segment. We recently met the T-Roc 1.0 TSI that provides an answer to the more mainstream end of the class. Today, it’s the significantly more potent T-Roc 2.0 TSI that gets our attention.

This most powerful T-Roc falls into the small but increasingly significant hot crossovers sub-segment, where cooking variants of the Mini Countryman and Mercedes-Benz GLA live. As such, its firepower is provided by Volkswagen’s ubiquitous turbocharged 2.0-litre four-cylinder petrol engine in 187bhp and 236lb ft form.

Our test car mates the unit to a seven-speed dual-clutch DSG gearbox and drives all four wheels via 4Motion technology, giving this T-Roc the quickest off-the-line performance statistics of its brethren. The 0-62mph dash takes 7.2sec and its top speed is rated at 134mph – that's enough to beat the cheaper Countryman Cooper S All4 but falls short of the more directly comparable GLA 250 4Matic.

Inside, our SE L-spec car - which is the top trim available until R-Line arrives in May 2018 – gets Volkswagen’s Active Information Display technology (the company's take on Audi’s Virtual Cockpit) in place of dials as standard, giving it an edge over rivals, as well as an 8.0in touchscreen on the centre console. 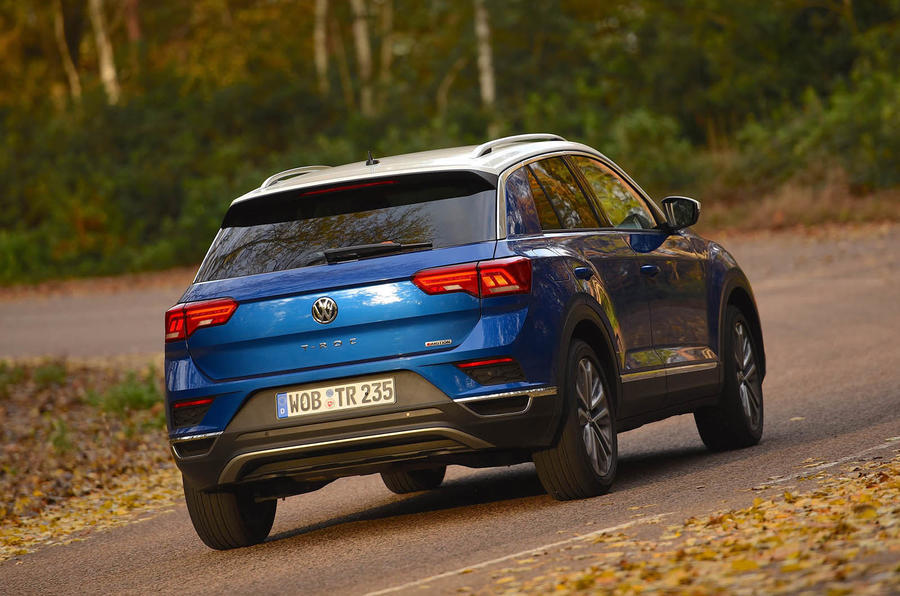 Buyers expecting an interior to match the car’s heated-up performance may be disappointed, because much of the SE L model’s cabin looks familiar to that of the mid-spec SE. The interior is practical and versatile but, on a variant that starts from more than £30,000, its generic design and the use of hard-touch plastics will hamper its desirability.

Standard-fit Active Information Display technology (normally a £405 option) is the car’s saving grace, because it far surpasses the effectiveness of most of its main rivals’ smaller instrument cluster screens. The high-resolution 10.3in display adds functionality and value to the interior, falling second only to Audi's Virtual Cockpit.

In this well-equipped form, the T-Roc weighs a hefty 1495kg, but the TSI engine does a fine job of marching it along and is both sharp to respond and elastic through the rev range. Maximum torque is available from just 1500rpm and it keeps on until 4180rpm, making it easy to maintain swift progress no matter the starting speed. The gearbox is quick-shifting, too; but, unlike other models where this powetrain is used, there’s no sporty soundtrack to match.

Much of our test was on cold, partially snow-covered B-roads, where the 4Motion all-wheel drive does a fine job of maximising traction and minimising slippage when left to its own devices. On lower-traction surfaces, there are four traction settings: Ice/Snow, Road, Off-Road and Off-Road Individual, which offers further customisation. We tried out Ice/Snow on a snow-covered section of grass and the car’s ability to juggle torque to each wheel to maintain traction was impressive.

The traction settings are accompanied by four drive modes: Eco, Comfort, Normal and Sport, as well as an Individual setting. With no optional DCC adjustable damping on our test car, the biggest noticeable changes each mode had related to the sharpness of the throttle and weight of steering.

Volkswagen chassis development boss Karsten Schebsdat told Autocar earlier this month that he has pushed for the T-Roc to be more playful and agile, particularly in 4Motion guise. This certainly seemed to be the case with our test car, which tackled winding roads with enthusiasm and was surprisingly neutral on turn in, only starting to understeer when really hustled into a corner.

The car’s ride is good and the damping well resolved, and although the 18in wheels fitted to the SE L model make cracks and ridges more noticeable, at no point does the ride feel harsh or firm. The way this car can maintain pace along a road without complaint is one of its strongest and likely most desirable traits. 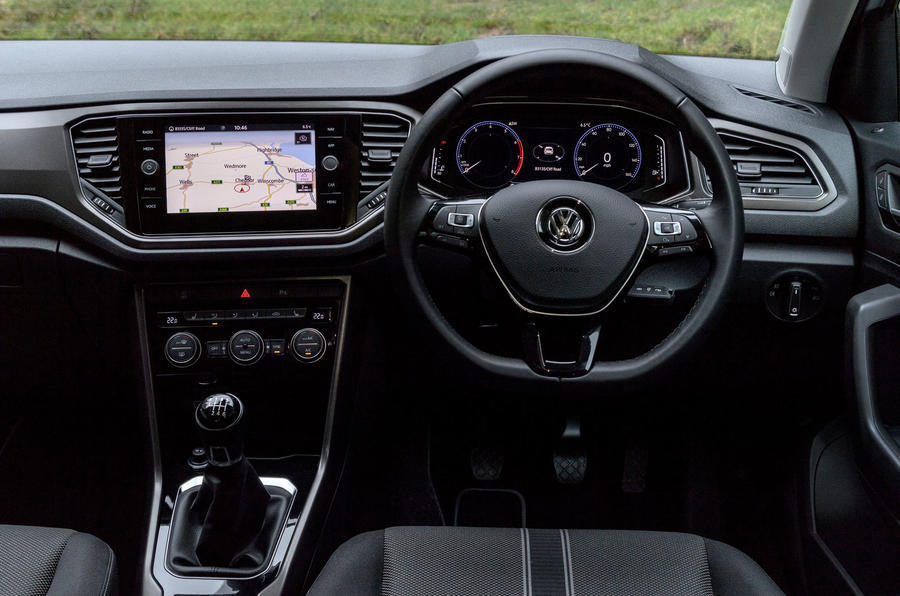 Opt for the variant tested here and you’ll need to fork out more than £31,000, which leaves the car in waters harboured by the more trendy and quicker Audi Q2 2.0 TFSI quattro S tronic. But the T-Roc 2.0 TSI holds strong as the slightly more fun car to drive.

While not the the most desirable car of its class, it is one of the best all-rounders and goes about its business in a more discreet manner than the technically similar (but more affordable) Seat Ateca 2.0 TSI and with less focus than the sportier Mini Countryman Cooper S. Admittedly, for those who aren't concerned with the talents of its chassis, that could leave it looking bland. 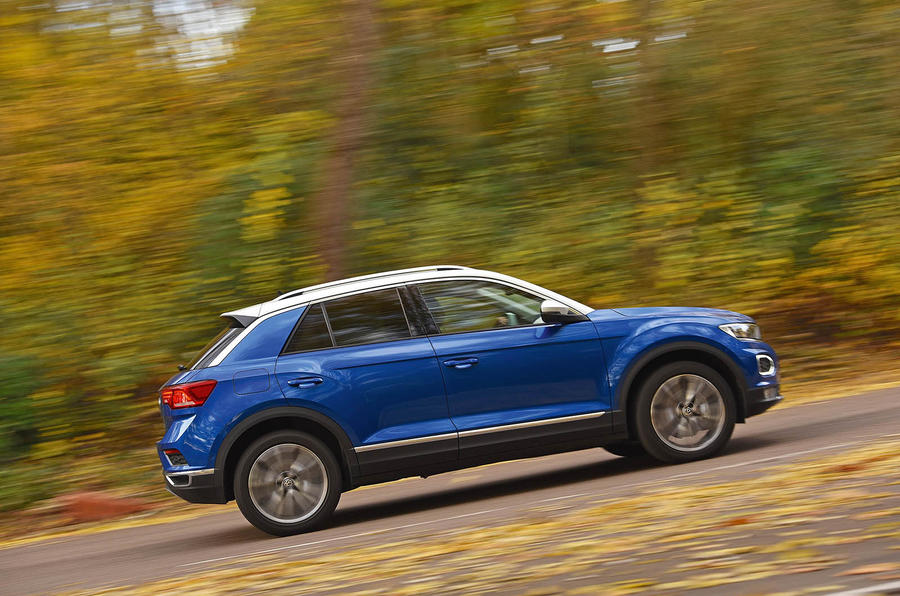 Wow I never knew VW prodeuced such an amazing engine!

Something tells me you got your spec sheets mixed up!

Wow I never knew VW prodeuced such an amazing engine!

Something tells me you got your spec sheets mixed up!

Someone needs to do some proof reading before pressing the publish article button! :-)

No doubt about it

"While not the the most desirable car of its class"

And the point is?

We're always told that the point of buying the VW over its cheaper relatives is the extra perceived quality.   But this doesnt seem to have that.  So why bother?  The Seat Ateca is better looking in any case...

Really strikes me this should be getting more of a kicking than it does.   If it had a Vauxhall badge on it it probably would.

The T-Roc looks refreshingly different from the norm.

...and usually the T-Roc is compared with smaller rivals as SEAT Arona, Audi Q2, Skoda Karoq, Hyundai Kona, Kia Stonic and so on.

Anyway, its dimensions are placed somehow between the actual fuzzy crossover segments but I guess this decision has been taken for a solid reason by the VW marketing guys.

I loved the style of the initial concept-car (kind of a targa coupe looking) while this final result is definitely blander, even if not 100% boring. Maybe this is exactly what the VW aficionados want though?...

At least the hard interior

At least the hard interior plastics got a (passing) mention this time. I wonder if Volswagen are going to abandon the squishy plastics on more of its models. If so, its going to be a big culture shock for the British automotive press: Fawning over these interior finishes was always a significant part of any VW review, what will they focus on now?

Not sure which. Dull = default comment. Is it dull or too familiar? Is it dull or not really differentiating itself from the rest of the VW stable? Is that the point? Just saying it is dull does not really help. Why is it dull? Dull in comparison to what? What can be said that is constructive about the dullness? Let's help VW understand their dullness and maybe drive a new design direction.

This type of design is VW, which leaves VW with a bit of an issue.

It can't stand this type of crossover. Nasty things. But this seems quite a sharp design. Clean lines, and from a design perspective, excellent. So if it is dull, it does not seem to be because of anything wrong with the design, from a designers eye. So is it people are asking for a bit of differentiation/ variation? Tough one for VW as their formula appears to work and nasty crossovers are the current default fashion.

a Juke is a really horrid-frog-eyed-swoopy-weird-lights-scattered-all-over-the-place piece of design, but apparently not dull. So are we, as a lot of commenters state VW are dull, suggesting that VW starts to build less design intelligent "non-dull" cars? Would a bit of ugliness/shocking design not go amiss?  A few civil type R flourishes? Maybe a bit of rodeos adventurism? Remove the VW from VW? Go a bit more Far East and less Western Europe? Maybe this is the way they can become less dull. Or they can do their VW thing, which seems to be a sales success. Don't expect any change soon.