From £21,4457
Share review
Volkswagen's new compact crossover has the looks, the engineering and the build quality to be a resounding success, but not with this diesel engine
Open gallery
Close

The diesel version of Volkswagen’s new compact crossover, and essentially a smaller and funkier sibling for the Tiguan.

As tends to be the case these days the T-Roc has been designed to combine the contradictory design traits of an SUV and a small coupé, sitting tall but with a low roofline and narrow glasshouse. As the model that has effectively replaced the slow-selling Scirocco in the corporate hierarchy, it gives a clear indication of the shifting preferences of aspirational buyers.

It’s not long since a car in this segment would, given a choice of fuel type, be overwhelmingly chosen with diesel engines. But times have changed and Volkswagen reckons that just one in five of the T-Rocs sold in the UK will pack one of three available diesel engines, with that low figure driven by the fact that a whopping three quarters of T-Roc sales are likely to be made to private buyers rather than fleets.

The trio of TDI engines are all familiar from elsewhere in the Volkswagen clan, and have power outputs that exactly match those of the three petrol engines. Base spec will be a 1.6-litre engine with 113bhp, and which will be available exclusively with front-wheel drive and a manual gearbox. Above that Volkswagen’s long-serving 2.0-litre unit is available in both 148bhp and 187bhp states of tune. The less-powerful iteration is offered with either front- or all-wheel drive and with the choice of manual or DSG. The full-fat version comes exclusively with the part-time 4Motion all-wheel-drive system and the twin-clutch automatic 'box. Our test car was a 148bhp TDI 4Motion with the DSG and in Europe-specific Designline spec, which will be close to SE-L in the UK.

Pricing hasn’t been confirmed for diesel versions yet, but Volkswagen assures us that it will be competitive given the generous standard kit, which will include two-zone climate control, radar cruise control and a suite of active safety systems. 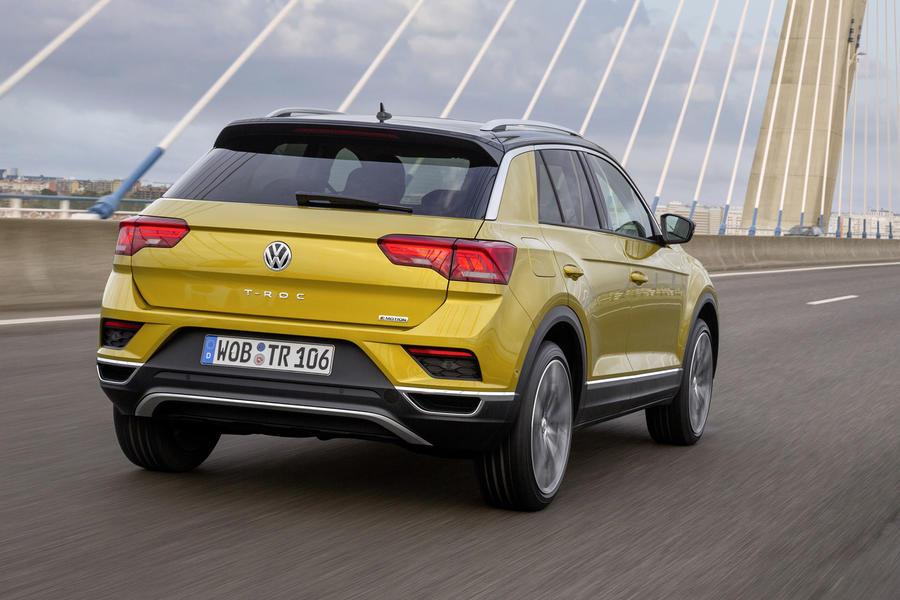 Beyond it’s funky name there’s little to suggest that a huge amount of imagination went into the creation of the T-Roc. While the design is both distinctive and reasonably handsome, underneath lies another stirring of the familiar porridge pot that is the familiar MQB architecture. The very fact the T-Roc is being launched in the same week as the very similar Skoda Karoq shows just how crowded Volkswagen’s product matrix is getting with smaller crossovers.

That’s the cynical view. A more charitable one – confirmed by actually driving it – is that the T-Roc feels both properly and expensively engineered and will likely turn out to be a front runner in its hard-fought segment. Behind the striking styling it is practical, refined and spacious enough for its mission and even good fun to drive; although driving both TDI and TSI variants back-to-back suggests that, fuel costs aside, the petrol is definitely the one to go for.

The diesel engine has a predictable abundance of low-down torque but it also feels languid and mushy when compared to the zingy 187bhp 2.0-litre TSI. Throttle response is leisurely, and although the TDI is refined under gentle use it develops a harsh tone when asked to get anywhere near its 4500rpm limiter. The seven-speed DSG gearbox shifts cleanly when left as an automatic, and seamlessly in its manual override mode, but the transmission’s enthusiasm is at odds with the engine’s stolid responses. Cruising refinement on the Portuguse Rodovia motorways we drove the car on was good, only wind noise from the tops of the doors disturbing the hush in the cabin.

Although the T-Roc is no sportscar, it handles more tidily than most of its obvious rivals. Overall grip levels are relatively modest, and the raised ride height creates body roll under harder use, but it feels well balanced front-to-rear and – more importantly – seems to enjoy being hustled along a twisting road at a decent lick. Our test car did without the optional adaptive dampers and the ride sometimes developed a harsh edge over rougher surfaces, but body control over bigger undulations remained disciplined.

While it feels like plenty of effort has been expended on the T-Roc’s exterior design, the cabin feels less special. It’s no surprise to find switchgear and the touchscreen interface shared with Tiguan and Golf, but hard plastics on the inner doors do feel very low rent compared to the usual excellence of Volkswagen cabins. The colour accents on the dashboard are also likely to be wide of many tastes, especially in the bright metallic gold of our test car. Practicality is respectable, but by no means exceptional. Legroom is limited in the back and access is hindered by a thick B-pillar. If you want family space, then the Tiguan is the better choice. 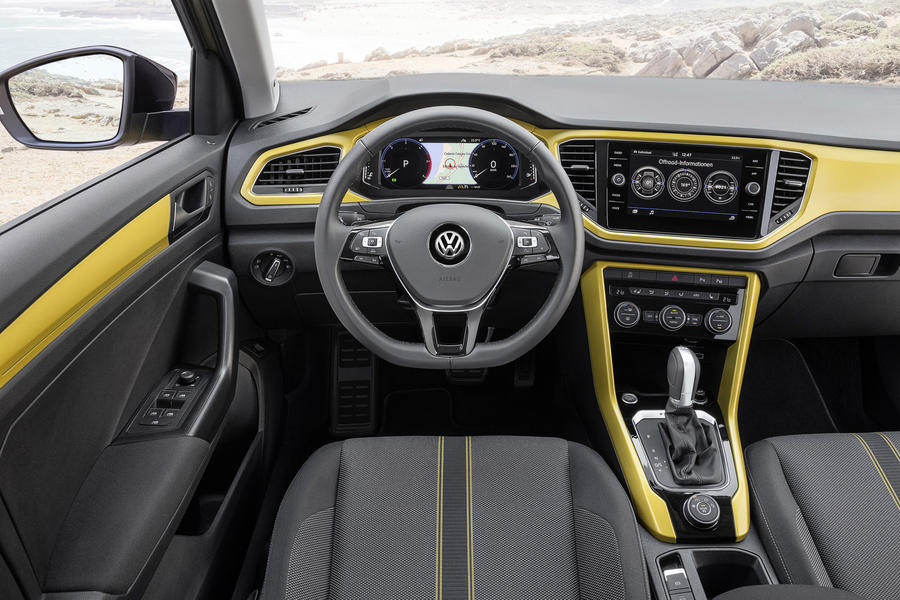 While it might be hard to feel the same level of enthusiasm for a compact crossover as for a coupé or sportscar, their popularity shows no signs of abating among the motoring public, and the T-Roc is definitely one of the best of its genre. Volkswagen reckons this baby SUV will likely become one of its biggest sellers in the UK, and on first impressions it feels like one of the better options in its segment. With strong standard equipment and the promise of competitive pricing, and what will doubtless prove to be some very attractive finance deals, it will almost certainly be a winner.

But if you are tempted, and don't have to put fuel economy at the top of your priority list, our advice is to choose a petrol over a diesel version, the TSI engine suiting both the car and the driving experience far better than this stodgy TDI. 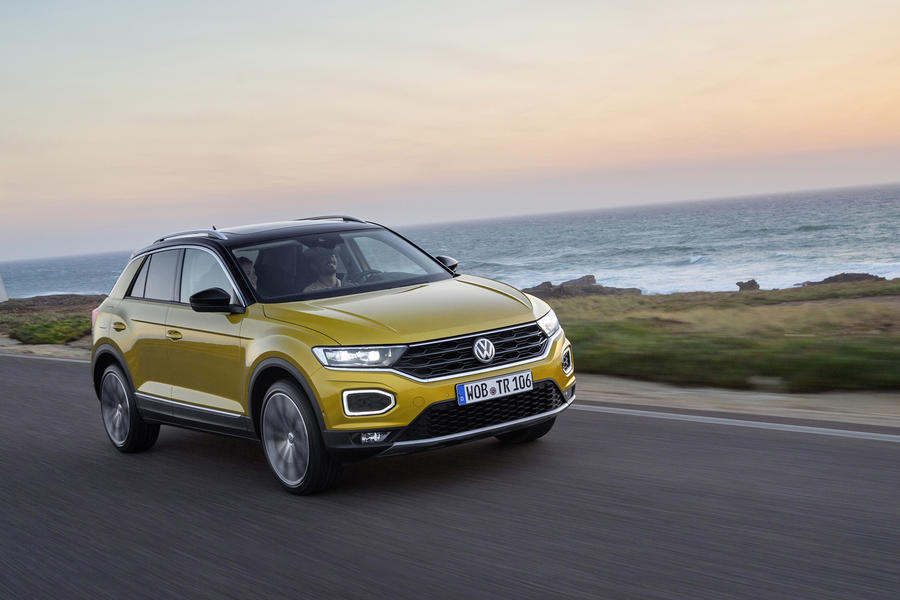 What would the group test look like? T-Roc, Ateca FR, Tiguan, Karoq?

Will there really be that much of a difference between them?

This seems to be treading onto Seats toes as the sporty brand in the shared MQB platform  (although I don’t really get that when VW has the GTI and Seat and Skoda have quick models).

I also can’t see this being as cheap as indicated.

What on earth are they thinking when they refer to this car as having coupe styling ! looks more like the re drawing of the equaly poorly styled Audi Q ( for questionable ) version. The interior looks cheap dull yellow detailing appart (an assualt on the eyes). I can just see all those scirocco drivers lining up to buy this....... not.

What on earth are they thinking when they refer to this car as having coupe styling ! looks more like the re drawing of the equaly poorly styled Audi Q ( for questionable ) version. The interior looks cheap dull yellow detailing appart (an assualt on the eyes). I can just see all those scirocco drivers lining up to buy this....... not.