From £17,1858
All-new Vauxhall Insignia has improved in pretty much every single department
Open gallery
Close

You’re looking at Vauxhall's new big-saloon flagship. The perceived decline in demand for large cars over the past decade hasn’t done much to harm the UK success of the Vauxhall Insignia.

Luton counts the 4.9-metre-long exec as one of its successes — one good reason why it has unveiled this new version this month, now called the Insignia Grand Sport. First deliveries are planned for late in June.

Prices, some revised downwards by as much as £1500 to fit new benefit-in-kind (BIK) tax categories, start at £17,115 for the entry-level Design model powered by a new 1.5-litre, 138bhp engine, and peak at £29,210 for the 2.0-litre, 256bhp Elite, which comes complete with an eight-speed automatic gearbox, an exceptionally deep specification and full-time four-wheel-drive. There are two petrol and two diesel engines on offer, with six different power outputs starting with the 108bhp 1.6 diesel, which delivers the range’s headline CO2 figure of 105g/km. 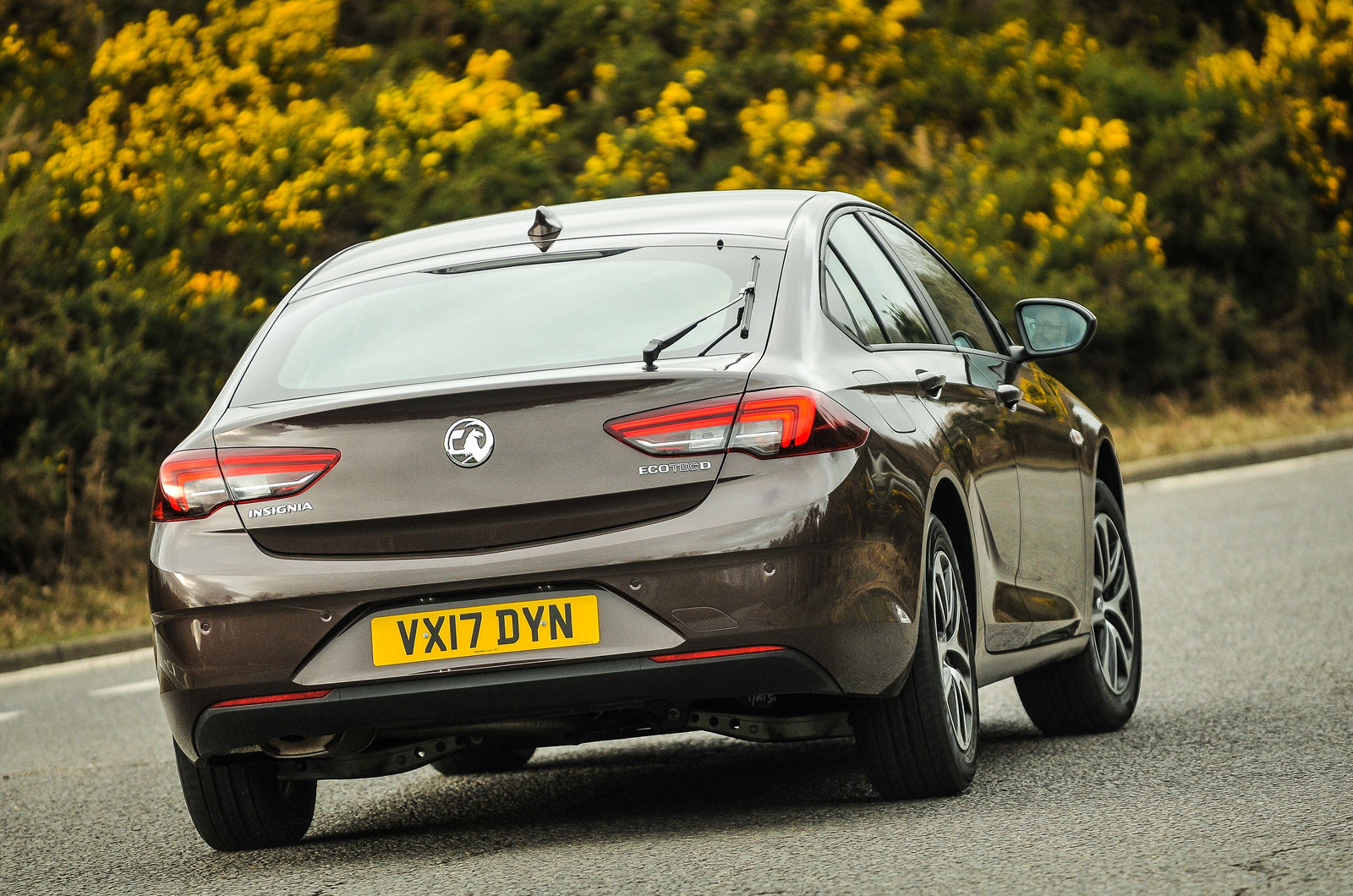 Since the launch of the original model in 2008, the Insignia has consistently delivered a bloody nose to two tough Volkswagen Group competitors, the Volkswagen Passat and Skoda Superb, and has also matched blows with premium saloons from Mercedes-Benz, Audi and BMW that have lately dropped into its upper price echelons.

However, with this new 2017 Insignia Grand Sport, Vauxhall says it’s getting serious. The Insignia now has all-new coupé-like styling reminiscent of the company’s 2013 Monza concept, a 92mm-longer wheelbase and a 55mm-longer body (now 4897mm overall) which allows for more leg, head, shoulder and hip room in the rear — previous points of criticism — and luggage space practically as big as the old models’ vast enclosures.

The Insignia Grand Sport comes with wheels varying in diameter from 17in to 20in depending on specification, but all models have the same spring and damper rates for their all-independent suspension. A Tourer (estate) version carrying a £1500 premium is due a few weeks after the saloon and a higher-riding Country Tourer model is due at the year-end.

Like the current Vauxhall Astra, the Insignia delivers a startling weight saving right across the range: up to 175kg, model-for-model, of which 60kg comes from the body alone. The car is also impressively aerodynamic. Design chief Mark Adams cites the simplicity of the sleek lines as one reason for an impressively low drag factor of 0.26. The interior is similarly impressive: it is simple, drawing inspiration from the clean surfaces of the exterior, and from Adams’ preoccupation with simple logic for switch design and layout. Best of all is an enhanced aura of quality, inside and out.

On the road, the new Grand Sport has the same relaxed, easy-cruising feel as its predecessor, but improved. Its slight increases in length and width aren’t detectable from the driving seat, though when you set it up for a six-footer, there’s still decent generous room for same in the rear. Our test car, a mid-spec Insignia Grand Sport Tech Line manual retailing at £23,910 (with £3900 worth of accessories that included the IntelliLux headlights, a newly-offered £705 glass sunroof and £555 worth of two-coat metallic paint) had the more powerful of two 1.5-litre petrol versions, packing 163bhp claimed to give it an 8.4sec 0-60mph time and a 138mph top speed. 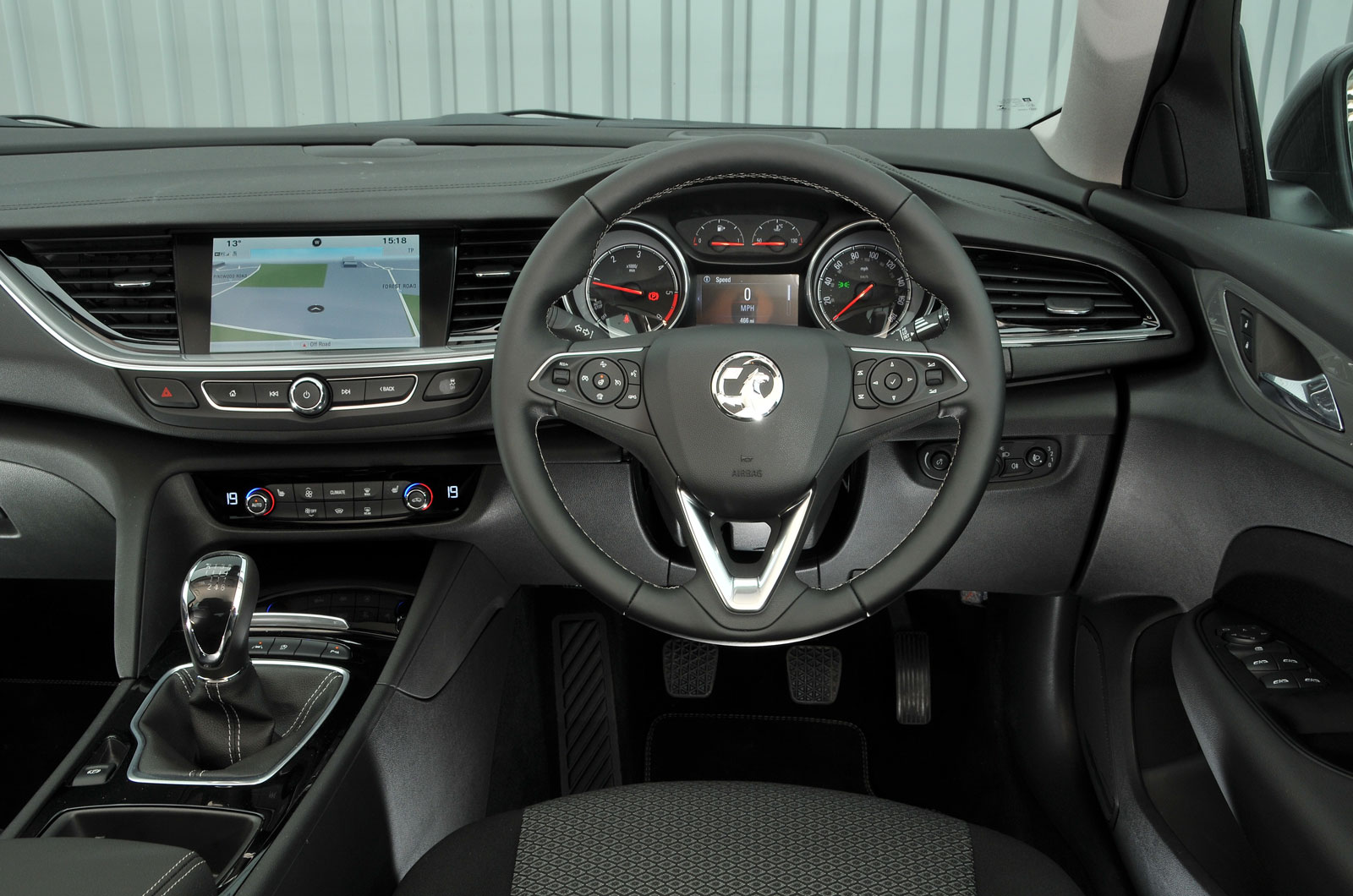 The peak torque of 184lb ft, developed between 2000 and 4500rpm, felt even more relevant to the car’s performance, however, because one feature especially relevant to UK motorways was the car’s relaxed gearing (2500rpm at 70mph) and another was its surprisingly strong top-gear acceleration around that speed. The six-speed manual gearbox is sweet-shifting and its action matches the clutch perfectly, but once the engine is turning beyond 3000rpm, it gains speed in high gears without effort or noise.

This model/engine combination turns in combined fuel consumption of 47.1mpg, while emitting 136g/km of CO2, which promises day-to-day consumption in the late 30mpg bracket. With the 65-litre fuel tank, the car should have an easy cruising range of 460 miles-plus.

The Insignia Grand Sport’s long wheelbase and wide track make this a very stable car with excellent directional stability. The 17in wheels on the car we tried were very good at damping higher frequency surface disturbances, but we get the feeling that bigger wheels with classier rubber would have sharpened the steering, which is okay, but still fails to stand out. They might increase tyre noise, though, which is already no better than average in a class that contains some good performers.

Overall ride comfort is better than before, and just about ideal for a car like this: flat and notably quiet over bumps, with a decent level of damper control that promotes good grip and near-neutral handling in fast corners. Brakes are powerful and easy to modulate. Even so, the 'Sport' in this car’s title shouldn’t be taken literally. The Grand Sport’s engine is smooth and quiet, and its wind noise is commendably low.

Looks very good to us. In the new Insignia Grand Sport, Vauxhall has repaid its supporters’ eight years of solid support by digging deep to give this replacement a whole raft of worthwhile changes that improve the looks, the space, the handling, the economy and the comfort. And in strategic places, the prices are lower, too.

In short, Vauxhall’s biggest saloon looks a better proposition than ever.

I'm afraid I have to agree with (near) consensus: this test car, lacking bright trim above the side windows and with smaller wheels, looks very dowdy indeed. Without darkened privacy glass (or some clever Photoshop work!) that gloss black panel instead of a fixed light aft of the rear door sticks out like a sore thumb. It's extraordinary that this was approved for production. I quite liked this car from the initial, flattering press photos but I fear it will just become instantly forgettable, like many GME cars. Incidentally, is it just me, or does anyone else think it looks like a supersized MG6? No? Just me then...
Will86 17 March 2017

This spec is not flattering. As much as I prefer the ride of smaller wheels, this needs 18 inch rims, privacy glass, a chrome window surround and a decent metallic paint finish. Get those and I think it will look very smart and represent good value for money. Even better, buy the Tourer which looks even better.
Mondeal 17 March 2017

With the exception of the (very expensive) Passat GTE I am not aware of any petrol Passats available in UK so how can a Passat 1.4 TSI be a rival???
View all comments (30)