From £17,1857
Lower-rung diesel Insignia saloon shows the odd sign of the bargain basement, but its blend of space, equipment, comfort and acceptable performance is strong
Open gallery
Close

This is the Vauxhall Insignia Grand Sport family saloon in as near to entry-level diesel form as we could manage, where it’s officially for more than 70mpg on the combined cycle, and also cheaper than an equivalent entry-level diesel Volkswagen Golf from the class below. If you like a new car with plenty of good old-fashioned value for money to trade on, few introductions this year will offer more.

Having not only redesigned and re-engineered its Ford Mondeo rival from the ground up, Vauxhall has been singularly aggressive with the new car’s price in a bid to grab back some of the market share lost to the likes of the Audi A4, BMW 3 Series and Mercedes-Benz C-Class since the introduction of the original Insignia in 2008.

So, besides a slightly more exotic-sounding name and crisper exterior styling, the new Insignia Grand Sport comes to UK showrooms in May with prices as low as just £17,115. Matching the kit list of our 108bhp diesel, £19,280 Design Nav test car on a Skoda Octavia 1.6 TDI SE will cost you more than £22,000 – and the Skoda’s a smaller car, don’t forget.

This second-generation Insignia is based on an all-new platform. It’s slightly larger but also considerably more spacious inside than the outgoing model, and it has new suspension, running gear and driveline technologies, as well as a range of new and updated engines. The 108bhp diesel we're testing here is likely to be a big part of Vauxhall’s sales mix and, along with its rangemates, benefits from an average weight saving of 175kg compared with the outgoing Insignia.

Higher-end versions of the new Insignia Grand Sport offer features such as asymmetrical four-wheel drive, FlexRide adaptive damping, an eight-speed automatic gearbox, active LED headlights, wireless smartphone charging and a head-up display. Of course, the equipment specification for lower-end models is understandably simpler. But even here you get an 8.0in colour infotainment system with sat-nav, Vauxhall’s OnStar concierge service, onboard 4G wi-fi, keyless entry and the latest electronic safety aids - all in a car that costs less than £20,000. 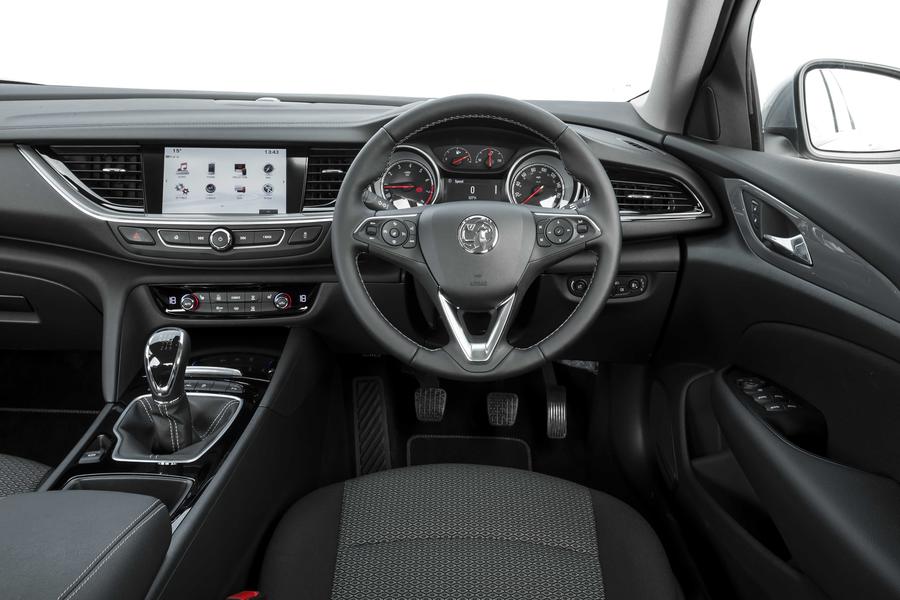 The new Insignia is a handsome car – much more so than its predecessor – although the creators of the Mazda 6 might point out that, from the front-end particularly, it’s not exactly original. The Insignia Grand Sport's curving roofline, mirrored cleverly by the upwards curve carried just ahead of the rear wheels on its lower bodyside, makes it look more elegant than most larger saloons manage, while the detailing is distinctive and neat. Entry-level Design-trim cars come with 17in steel wheels, but they’re fitted with very attractive trims that make it difficult to tell they’re not alloys.

Inside, the practicality standards of the last Insignia have been thoroughly surpassed as a result of a stretched wheelbase, granting second-row leg room significantly better than you’ll find in most compact executive saloons. Rear head room is a little affected by the plunging roofline, but it’s still sufficient to accommodate passengers who are more than six feet tall.

In the boot, a small compromise has been made in order to deliver the enlarged passenger quarters, so cargo capacity has decreased slightly from 530 to 490 litres. The boot looks a little bit shallow compared to some rivals', but is still well capable of swallowing bulky items such as suitcases and buggies.

Quality inside is a little bit mixed. There are soft-touch materials on the upper dashboard that reach downwards to the margins of the centre console and sideways along the tops of the door consoles, making many of the car’s upper surfaces look quite pleasant. Where the mouldings are hard, however – on the lower doorcards and around the transmission tunnel – they are quite shiny and plain, while the flimsy plastics around the steering column feel quite poor. 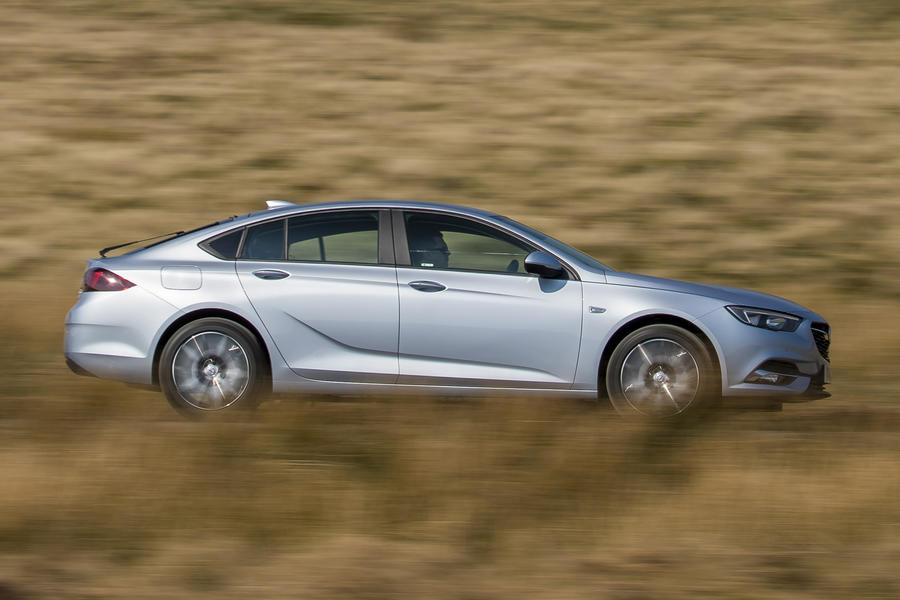 The Insignia Grand Sport's 1.6-litre diesel engine is actually slightly quieter than the 2.0-litre unit that powers the more expensive diesel model – although neither could really be considered a particularly refined car.

Your natural concern is that 108bhp won’t be enough to propel this 4.9-metre saloon with sufficient conviction to make it easy to drive. But in fact, the smaller diesel provides more than enough torque to make this car drivable in normal daily use, although it runs short on puff in some circumstances.

The engine has a slightly limited band of usable torque; it comes on strong smartly enough from low revs, before running a bit short on power as the needle rises beyond 3500rpm. A consistently weighted and reasonably slick six-speed manual gearbox makes keeping the car pulling keenly a pretty easy task, though. Working the engine while accelerating up to motorway speeds can feel like hard graft, and there isn’t quite enough torque on tap to pull off overtaking on single carriageways without sweating a little bit. But if you’re happy to move along with the general flow of traffic, there’s plenty of urge on tap and more than enough for steep inclines.

The Insignia Grand Sport conforms to the typical dynamic mould of big saloons by being softly-sprung, long-striding and generally comfort-orientated. Its standard passive suspension combines with its 17in wheels to make for a ride that’s compliant at all times, but that also feels a little too under-damped to make for ideal ride isolation over sharper edges.

The suspension copes quite well when you hurry the car along, keeping a decently level and closely-controlled body and maintaining respectable grip levels and good stability under duress. But, although the steering is well-paced and weighted and very distantly feelsome, the Insignia Grand Sport’s handling isn’t as sweetly balanced or as engaging as that of some of its rivals.

The more pertinent question is probably: “if I end up driving one, how will I feel about it?” Well, the answer’s probably: “pretty good - provided your pocket’s benefitting from the relative value for money it’s delivering.”

Vauxhall may be engaged in a very difficult task in slowly moving the perception of its brand upmarket, but it’s produced a handsome car in the Insignia Grand Sport that’s well-equipped, practical, fit-for-purpose and broadly free of vices – as well as being remarkably cheap at this lower end of the model range.

Sure, it isn’t very special and isn't much to drive, and it’ll continue to be a tough sell to those looking for desirability and aspirational appeal from their business saloon. But for cool-headed, rational, value-driven fleet users and bargain-hunting family types alike, it’s a strong and appealing prospect. 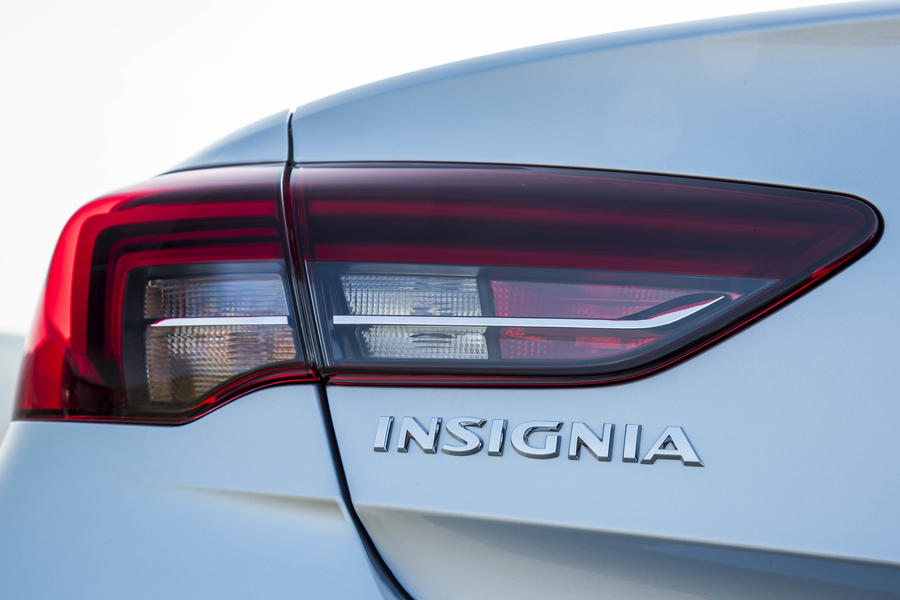 Can't think of any reason to choose a 1.6 Golf over this at all.... only thing that holds it back is the badge.

I thhink you are confused XXXX

Cheap and value for money are very different things, This is definitely cheap.
xxxx 8 April 2017

Did you get run over as a kid by an Opel, your bias is sad and your non -acceptance of other peoples opinion is sadder still.
xxxx 7 April 2017

With the basic model only costing £2,000 more than the most basic next gen Fiesta (yes I know it's not in the same segment but it shows how cheap it is) I don't think anything can get close in this segment.
p.s. Autocar a better comparison would be the Skoda Superb(or old gen A4 as I call it) rather than the Skoda Octavia, the difference in VFM would probably be even greater than £3,000!