From £22,5156
The first PHEV to wear the Griffin badge delivers hot hatch pace - but can it match premium competition for ride refinement and interior finish?
Open gallery
Close

Meet one half of Vauxhall’s two-step journey towards electrifying its entire passenger car line-up by 2024 - a journey set to make its other significant stride forward in just a few months with the arrival of the Corsa-e electric supermini.

The Grandland X Hybrid4 is the first ever plug-in hybrid to wear a Vauxhall badge, 2012’s Ampera being, strictly speaking, a range-extender electric car rather than a PHEV. With a 13.2kW battery, it can deliver as much as 35 miles of zero-emissions range - enough, says Vauxhall, for 80% of customers to do the majority of their driving on electricity alone. A 7.2kW wall box can then recharge it in under two hours, though only if you pay £500 for the option.

Of more interest to the average Autocar reader? That this is also the most powerful production Vauxhall on sale today, a pair of electric motors and PSA’s familiar 1.6-litre turbocharged four-pot petrol engine sending 296bhp to all four wheels. 0-60 takes a claimed 5.9 seconds, or enough to raise the eyebrow of the average hot hatchback owner.

In the UK, the all-wheel drive Hybrid4 starts with with the well-equipped SRi Nav trim, at £41,500. Our test car, a top-spec Ultimate Nav which adds niceties such as advanced park assist, premium audio and bespoke LED headlights, was an altogether more ambitious £46,650. That isn't too far removed from premium plug-ins from Audi, BMW and Volvo. Fleet customers may be more tempted by the Business Edition at roughly £37,000, but private buyers may want to wait for the less pricey, front-drive only variant set to follow later in the year, with an equally attractive benefit-in-kind tax rate. 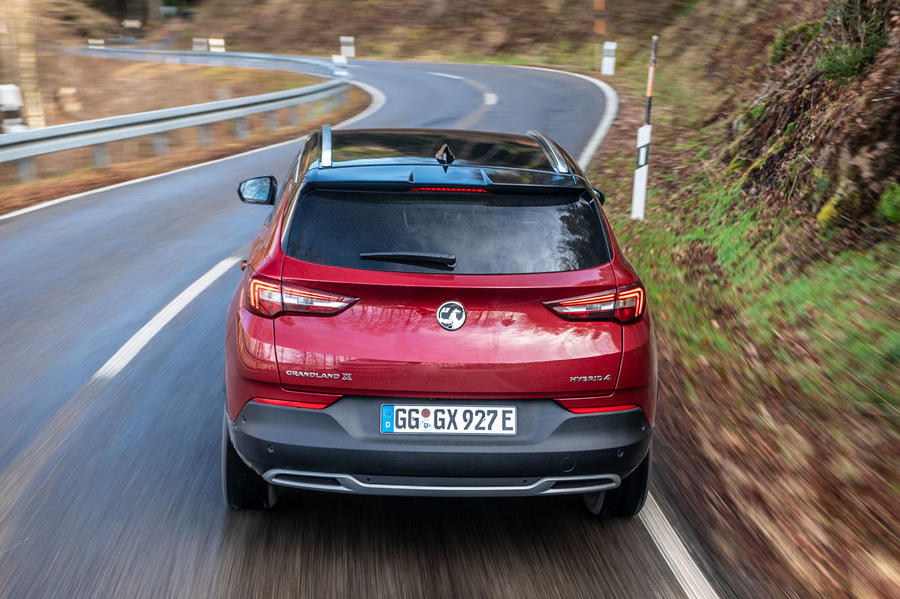 On the road, the Hybrid4 delivers exactly the kind of split personality you’d expect given its performance and economy figures. It defaults to Electric mode, where it’s unsurprisingly quiet and relaxed, all the way up to motorway speeds. Here, the 111bhp motor built into the rear axle is doing much of the heavy lifting, with the front motor (a 108bhp unit) stepping in to assist when required.

Most driving can be done in Hybrid mode, which swaps between the combustion engine and electric motors on the fly and sends power through an eight-speed, wet clutch transmission, rather than the torque convertor automatic found on PSA’s petrol and diesel models. It’s a smooth system, transitioning between petrol and electric power without the noticeable lurch seen on some rival hybrids. The petrol engine stays largely isolated from the cabin when it does cut in, as revs build to noticeable but unobtrusive levels.

There’s no questioning the amount of straight-line shove available in the Sport and All-wheel drive modes, which combine the outputs of all three power units. It avoids the almost violent levels of acceleration some pure EVs seem to favour, though unleashing it also reveals quite how vocal the combustion engine can be. The gearbox is quick to kick down, and while revs don’t flare in the same irritating manner as a CVT, the petrol motor still sounds particularly strained when stressed. That’s one way to encourage you to plug your car in at either end of the journey, I suppose.

While Vauxhall would argue the Grandland X has more dynamic potential than any of the PSA Group stablemates with which it shares its EMP2 platform, there’s only marginal reward for hustling it through the bends. It feels every bit its 1800kg, with body roll noticeable at fairly moderate cornering speeds. While we’re happy that the steering wheel doesn’t artificially weight up in the sportier modes, it doesn’t provide much feedback to the driver either.

The ride is undeniably on the firm side, too, even on the smooth European roads of our test route - although the winter rubber fitted to our car won’t have helped its cause. Though minor bumps and undulations aren’t enough to destabilise things, How well it will cope with Britain’s road network remains to be seen.

Inside, the cabin has a more minimal (some would call it basic) dashboard than its Peugeot 3008 sister car, so while harder plastics are largely kept below your eye line, the immediate impression isn’t necessarily of a car costing northwards of £45,000. The small instrument cluster LCD is flanked by analogue dials, which feels like a step down from Peugeot’s all-digital i-cockpit. The 8in infotainment screen also looks rather simple with its low resolution graphics, though Android Auto and Apple CarPlay functionality offer a more visually appealing alternative.

In the rear, the hybrid system’s batteries haven’t eaten into head or leg room, and only boot space takes a hit, with 390 litres of stowage compared to the standard car’s 514. In most respects it remains a practical family SUV in plug-in guise. 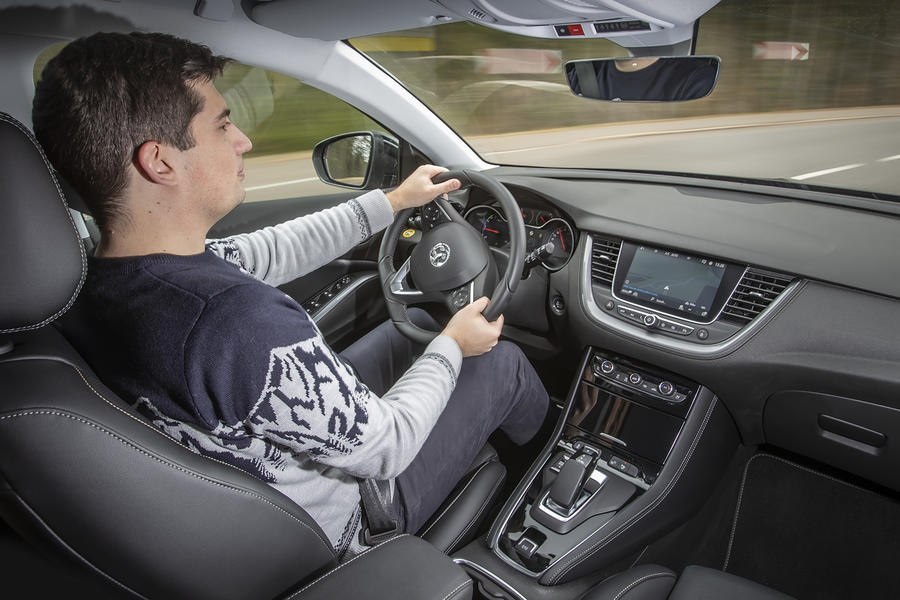 Given the extensive benefit in kind savings a plug-in hybrid powertrain can deliver, don’t be surprised if the Hybrid4 becomes a regular sight on UK roads - though it remains to be seen how many will be Ultimate Nav cars.

In top-spec trim this is an expensive car that lags behind rivals for interior technology and ride refinement, and can’t make up for that with a particularly dynamic drive. That a plug-in Audi Q5 isn’t a massive leap in terms of monthly payments suggests this simply isn’t the pick of the range.

In a lesser trim and with a competitive PCP deal, however, the Hybrid4’s straight line performance and potential economy gains for those with the facility to charge it at either end of their commute could still make it a tempting proposition. 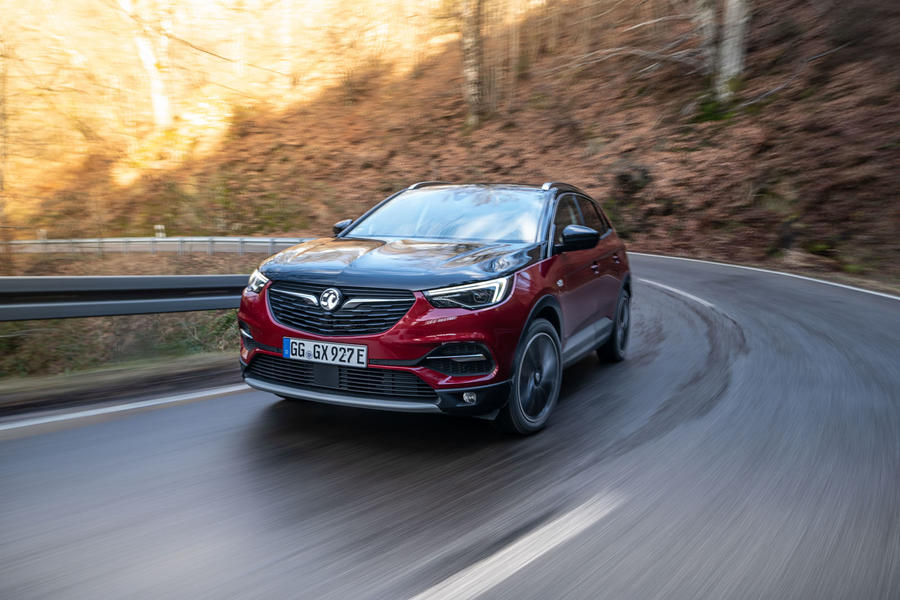 It's such a dull looking car, not helped by having a name that sounds like Granddad.

PHEVs are a massive comprimise and only work for certain people (I should know, I have an Outlander).  You might just get that 204mpg if you do lots of short journeys.  I do virtually all my journeys on electric alone.

But generally company car drivers do big mileage which means that even with a full battery, you won't be getting much more than 30-35mpg on a motorway trip.

So a private buyer will get a second hand Outlander for £16K whilst a business buyer will find that the lease and fuel costs on a BMW diesel are much less.

I've no idea who will buy this.

They've tested the wrong car really, this is a ridiculously high specced and priced version, they should have tested the business nav premium at £10k less, it'd be more representative of what people are likely to choose. Silly of vauxhall really to not give out a decent prices and specified version for tests.
LucyP 28 January 2020

The price is insane

Why do they keep doing it? £47K for a Vauxhall. You don't have to get into badge snobbery to know that very few people are going to opt for the Vauxhall. As for waiting 2 years Ski Kid. You can buy Grandland X's that are not much over a year old with less than 12,000 on the clock for under £15k.

A £32k saving buys a lot of fuel and covers a lot of extra tax/emissions/congestion etc charges. You would have to be the full on Thunberg to blow £47k to save the planet by buying that thing new.

I don't understand it, either. I've been a Vauxhall fan all my life but even I'm getting fed up of the dire styling, poor reliability and stupid list prices. The styling department at Opel need a kick up the backside. The new 208 looks better on the outside and light years better on the inside. It also drives better than the Corsa. They have to lift their game dramatically if they're going to continue to produce cars.
View all comments (7)