From £19,8707
The Vauxhall Corsa has been one of Britain's best-selling cars for years. We get an all-important first steer of the new one on UK roads
Open gallery
Close

Vauxhall is keen to make mention of how important the Corsa is: not just to Vauxhall itself as by far and away its most popular model, but to the UK. Generally second only to the Fiesta in the supermini sales charts, it's a model that transcends age groups and classes. Almost everyone will have been in or driven a Corsa throughout their life.

Anyway, you’d have been living in a cave (or perhaps not reading Autocar often enough) if you weren’t aware of the latest Corsa’s relationship with the new Peugeot 208. Opel was close to finishing a new Corsa under GM ownership, but when the PSA Group took the reigns in 2017 the project was started afresh with PSA’s modular CMP platform, for reasons explained eloquently by my colleague from the Corsa’s European launch.

So, a mere two years from that point, we find ourselves on the roads around the sprawling Goodwood estate in a Vauxhall supermini that is unrecognisable from its predecessor. And that’s a good thing, we reckon: the old car had almost MPV-like proportions, whereas the new model has a full 48mm lopped off the roofline and 39mm added to the length. It’s actually a touch narrower, but it certainly doesn’t look it thanks to its squat, purposeful stance.

The new Corsa’s range is, thankfully, greatly simplified over the old car. Instead of a baffling array of trims and engine there’s two petrol engines, one diesel and a new, all electric version (more on that early next year). These can be mated to six trim levels (each with a ‘Nav’ spec), with options grouped into packs. 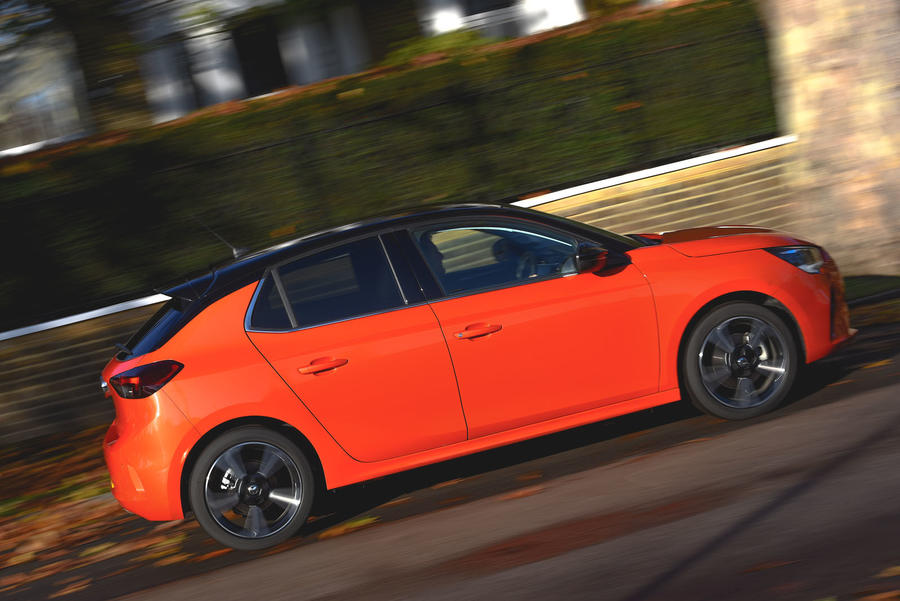 With two million Corsas sold in the UK alone since the first one rocked up more than 25 years ago, Vauxhall can’t afford to serve up a duffer. And it hasn’t. But it’s no longer a value proposition in the class, that's for sure.

Its £15,600 starting price (around £4k more than the old car) is par for the course these days, but by the time you’ve got the 99bhp turbo motor (the one you want), stepped up to middling SRI Nav trim for some kit and optioned a colour, this is a £20k car. You can spend up to £26k on a new Corsa with a petrol engine, and the EV’s even pricier. And before you argue that list price is irrelevant, your PCP payments are calculated based on residual values.

Fortunately, whether inside or out it looks every inch as if it has shed its bargain basement roots. This has to be the first Corsa to venture into the realms of desirability, and even if Vauxhall’s designers have toned down much of the 208’s distinctive detailing, it’s still a relative success.

Inside, the Corsa again takes a less visually arresting approach to dash design, with functions grouped for ergonomics rather than in the name of style. Quality is respectable, and details such as the dials (conventional, unlike top-level 208s) and easy-to-use climate stack are bespoke to the Corsa.

There’s also a normal-size steering wheel, which will interest those who aren’t a fan of Peugeot’s iCockpit approach. PSA-specific quirks remain, however, with the traditional comically tiny glovebox next to the fusebox that was clearly too much trouble to move, and pedals that are placed too close to the driver, causing taller folk to either crab their legs at an angle or sit unnaturally far from the dashboard.

One other important point of note: the 7in touchscreen found in the less posh trim grades isn’t just significantly smaller than the high-end 10in set-up, it also loses the convenient shortcut buttons below the screen, replaced by far more fiddly touch-sensitive items down the side.

The new Corsa has been designed to allow for petrol, diesel and electric models to be spun from the same production line, and Vauxhall proudly boasts that the EV offers no space reduction. But it’s clear that a packaging compromise had to be made to achieve this, particularly when adults try and squeeze into the back. Leg room is decidedly tight by class standards, while head room is no more than acceptable. The 309-litre boot is at least competitive enough.

Cavernous it might not be, but the trade-off is the car’s kerb weight, which starts from just 980kg - up to 108kg lighter than the old car. Such engineering effort was expended, we suspect, to keep the weight of the battery-laden EV variant to a minimum, but it means sprightly on-paper performance, strong efficiency and improved handling agility.

This three-cylinder, all-aluminium 1.2-litre engine is expected to be the volume seller, and it’s a decent all-round unit. Strong and tractable at low revs, it’s also refined regardless of where you are in the rev range. There’s enough performance here to satisfy most, too, but it’s a pity the motor runs out of puff by about 5000rpm, making short-shifting the order of the day. Those shifts aren’t exceptionally pleasant, either - the shift action is smooth, but long of throw, with the bulky gear knob hardly helping matters.

We’d like to see Vauxhall bring in the 128bhp version of this engine to give high-spec cars a warm hatch vibe, and the signs of this happening in due course are positive. Chances are it’ll be auto-only, however.

That additional power would complement what is a nicely judged, if benign, chassis. Turn-in is positive and more progressive than the darty 208, and while our route around the sodden West Sussex countryside didn’t allow for full-attack cornering, grip levels seemed strong and body control tidy enough. It’s clear even here that this won’t offer the grin factor of a Fiesta, but it’s wholly competitive and modestly entertaining at times.

SRI spec brings specific features such as a Sport switch, which doesn't do an awful lot, synthesised engine sound enhancement, which isn't particularly noticeable, and new suspension tower tie roads, which have a negligible effect at best.

Ride comfort depends, as if often the case, on your wheel and tyre choice. We drove both 16 and 17in versions on identical roads and it’s clear that extra inch of sidewall unlocks welcome suppleness, with the bigger wheels allowing lumpy rural asphalt to unsettle it more. But you’ll find any Corsa to be decently comfortable and refined on long journeys, aided by surprisingly comfortable sports seats in SRI trim. 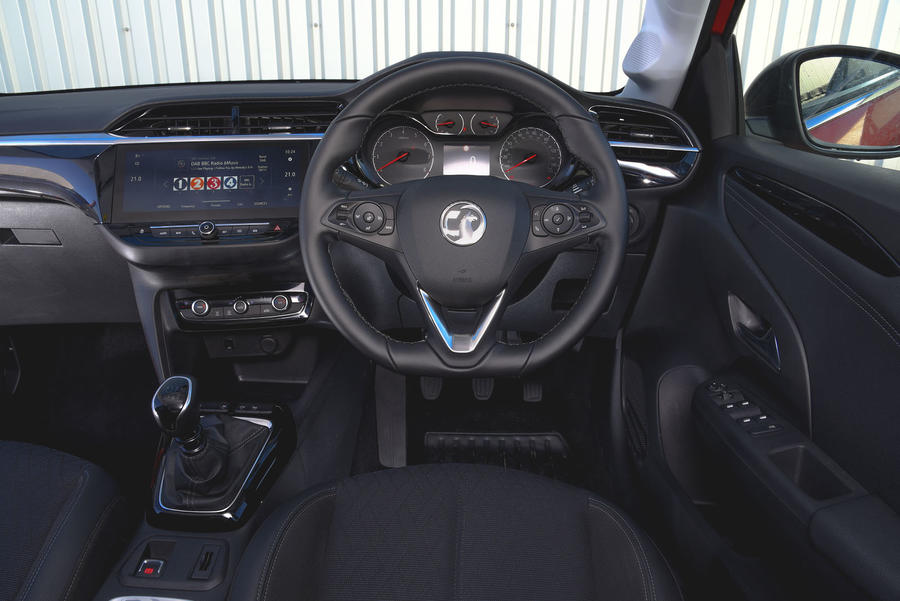 The new Corsa would have been vying for class honours had it launched a couple of years ago, as GM planned it. But since that time we’ve had cars like the excellent Seat Ibiza, the fine handling Ford Fiesta, the polished VW Polo and, most recently, the remarkably improved new Renault Clio.

Make no mistake, Vauxhall’s new supermini is a fine, grown-up, likeable car that deserves to continue the outgoing car’s sales success. But it’s not outstanding, dynamically or otherwise. Perhaps it could have been had so much effort and cash been put into making the platform EV compatible, but we’ll never know.

We’ll have to wait another couple of months before we’re able to sample the battery-powered Corsa, which will have a much narrower pool of rivals to contend with and promises a class-leading range. 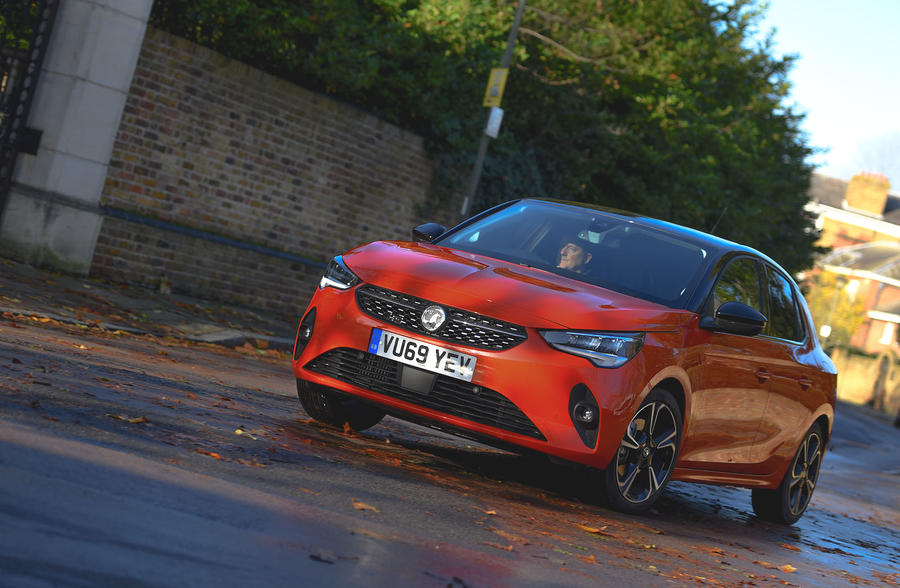 I remember the days of good healthy competition between Opel and Vauxhall in the UK in the 80’s. Nothing like competition to help drive up design, engineering and manufacturing quality.  When Opel was pulled from the UK, My Dad always used to drive to the Irish Republic to pick up his new Opel, he preferred the build quality and design of those cars over the British designed and built Vauxhall’s.

They were so similar anyway, why didn’t they just produce one design for each class of car?

Just a quick point of information...

The new MY20 Vauxhall Corsa starts from £15,550 here in the UK and not from £10,810 as indicated in the heading to the above article - see Autocar's own article on the model's launch at last September's Frankfurt Motor Show.

Incidentally, I note that the same error has been made in the heading to Richard Lane's review of the MY20 Vauxhall Corsa 1.2 Elite Nav version which was published on the 19th November.

I'm afraid that figure is taken from an independent database that hasn't updated its system - we have no power over that particular section of the page display right now. But will see if there's a workaround.

Everyone expects a big

Everyone expects a big discount on a Vauxhall so they are just starting high I guess to try and keep some margin. Trouble with this is starts out priced like a premium but it kills residuals so the owner loses out big time in the end.

Ford got caught in this loop and its very damaging long term, it pushes you out of the fleet market as no one wants to pay tax on a £25K car that actually only cost £17K in fleet bulk. It also perpetuates the image that your products are cheap and nasty if you can discount so severely, people don't like to feel ripped off and a high list price that can be cut so hard suggests an attempt to flog something for a lot more thats it worth.