As keenly priced and with a real-world electric range as good as a whole host of other recently arrived zero-emissions rivals, the Corsa-e isn't lacking in showroom appeal, nor in the number of Vauxhall showrooms across the country in which to be sold. Just as the Corsa supermini has been the first car of so many people over the years, the Corsa-e is likely to be the first electric car of many more.

We were impressed with the Corsa-e on first acquaintance, back in the early spring in Germany, when one could cross a border freely before you-know-what. And now, a touch later than advertised due to you-know-what, the Corsa-e is with Vauxhall dealers, ready to try to convert buyers from the pump to the plug. First, it must try to win us over in this initial UK test.

The story behind this new, sixth-generation Corsa is well known: hastily re-engineered from scratch when Opel-Vauxhall switched from General Motors ownership to the PSA Group, it made it through development in record time as a sibling to the Peugeot 208 and is offered with petrol, diesel and electric drivetrains, with little differences between the variants apart from the obvious.

Vauxhall, like all PSA brands, is adopting this multiple powertrain choice, including electric, across its future model lines rather than do stand-alone electric vehicles, because it believes electric becomes a less intimidating switch for buyers this way. 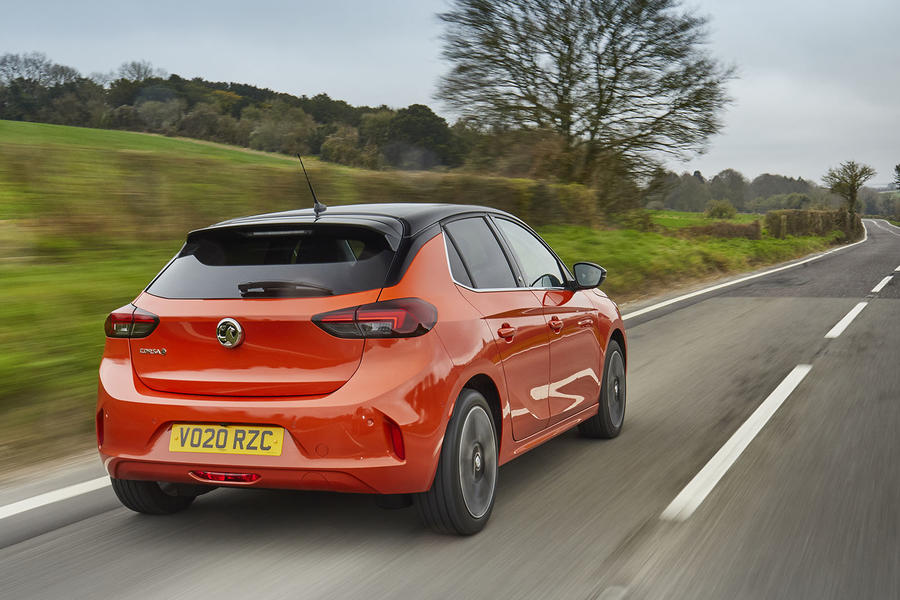 There’s certainly little to be intimidated by in this Corsa-e. It’s a Corsa, after all, smart enough but a little generic in style, even if much improved over its predecessor, which seemed to be on sale forever. Still, it’s a shame that Vauxhall has chiselled away some of the flair of its Peugeot sibling, one of the best-looking and best-proportioned superminis on sale today.

That goes for the inside, too, which you would consider a bit plain even before seeing what Peugeot does with the same architecture.

Some subtle 'e' badging and bespoke alloy wheels are all there is externally to tell an electric Corsa from a conventional one, but the changes are more drastic under the skin, where the front and rear tracks have been widened, wheelbase marginally lengthened, front suspension beefed up and rear torsion beam moved back slightly – all to accommodate the H-shaped 50kWh lithium ion battery pack in the floor.

That battery defines so much about the Corsa-e. That’s an obvious statement when you consider the way its power is delivered. There’s the typical shove off the line when you first accelerate, although it’s not quite as brisk or as unruly as some rivals. Performance tails off after about 50-60mph, but the real-world shove up to that point is as much as you’d ever need in most conditions. The average Corsa buyer will think they’ve ended up in a VXR with the mute button on by accident, particularly when they activate the kickdown.

But the battery also greatly influences the ride quality and the handling. The extra weight (some 345kg) actually helps the ride compared with the standard Corsa, which feels quite nobbly. The whole car seems more settled, with the 10%-lower centre of gravity of the Corsa-e also helping here. Although the ride is better, some of the handling verve of the standard Corsa is lost on turn-in, but there’s a nice weighting to the steering that wins you over in the end when you get used to it, despite it feeling really quite springy at first.

As for its EV vitals, a real-world range of 200 miles is to be believed in the summer on mixed road conditions driven in the ‘B’ mode that turns on a nicely judged regenerative braking system. A home charger is included in the list price and the Corsa-e supports 100kW DC rapid-charging as standard, too. 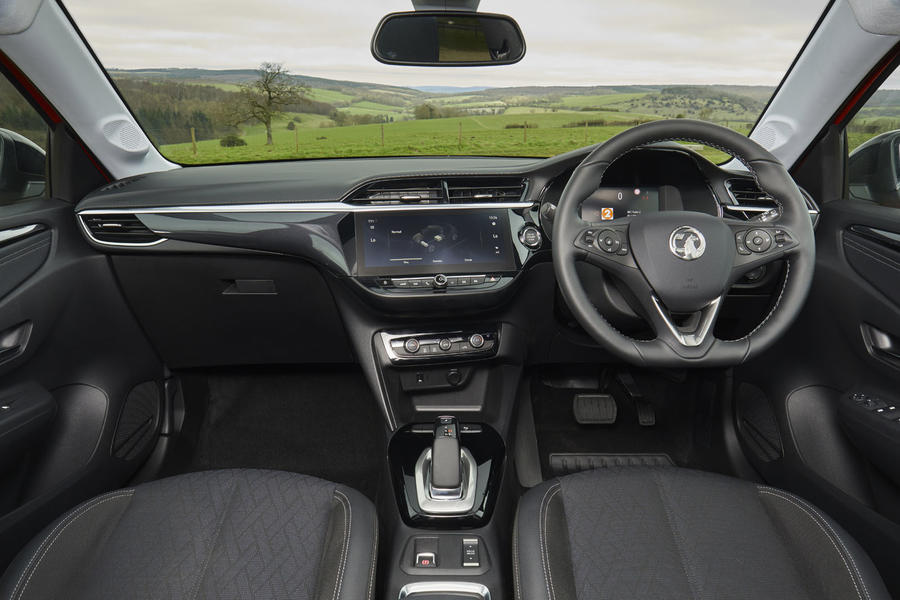 As an introduction to the world of electric cars, the Corsa-e makes a strong case for itself. The driving experience isn’t as radical as some, the styling inside and out even less so, but it’s in the feel of familiarity where this car really wins.

It’s the EV for people who didn’t really know they wanted one and do so without really thinking about it – exactly the kind of car the government needs to be bought in droves if its aim to bring down the internal combustion engine is ever to be realised. 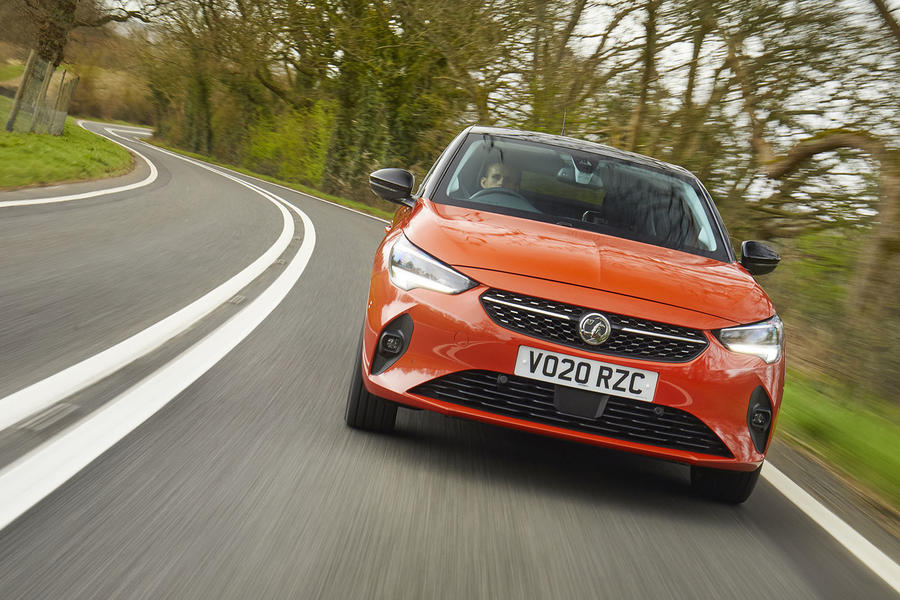 I like it, it's a quite attractive looking car in a VW way that also doesn't offend and the interior may not be as exciting as the Peugeot's but it still looks smart.

What are you looking at under the bonnet? I can see the Aircon pipework but is that the motor and single speed gearbox taking up the space of the engine? I ask because the Nissan leaf is similar under the bonnet yet we are often told that EVs give more freedom for clever packaging, I can't see how this is if the motor assembly takes up similar room to an ice.

I agree with Si

Can't understand these constant sniping references to the 'plain' looks/interior, particularly in comparison to the 208. They're both attractive cars, though my personal preference would be for the Corsa. Rather than focus on the competiveness of the overall package, Autocar has to start the review with a negative. Redolent of similar comments re the Grandland Hybrid4 - again an attractively-styled car with an understated presence - where it's classy piano black/chrome/leather interior was criticised for being dull, as if such a combination is unknown in competitors! This not so hidden agenda is becoming tiresome.

Purchased Elite Nav 7kw specification in May'20 and never since purchase had more than 138 miles range after being fully charged  ! Even before I begin to travel on the road my range is limited, not as advertised by Vauxhall which is disappointing. Otherwise car is great.

Range seems to vary usually on the lower side of manufacturers claims however I am finding the opposite with my Hyundai Ioniq. It's battery is considerably smaller than the eCorsa at 38kw versus 50kw and the claimed range is 194 versus 200 for the Corsa however my car is getting 180 in winter and 219 in summer which is amazing for such a small battery. My advice to achieve these levels is to change the way you drive and adapt to the car and it's technology, it's very cheap motoring with a charge costing a few quid..