From £26,2957
First new-breed Toyota hot hatch is expensive but within sight of its best-handling rivals. Troubled in some ways, but appealingly honest, engaging, characterful and different
Open gallery
Close

The Toyota Yaris GRMN reminds you of that old chestnut of a gag about asking for directions in some faraway place, only to be told: “if that were where I was heading, I certainly wouldn’t have started from here.”

Among the current crop of turbocharged hot superminis, it feels every inch the misfit that you might imagine a warmed-up Yaris would make. It is also, however, one of the more involving, simple and likeable hot hatches we’ve driven of late – not to mention a car that, while a long way from perfect, ought to be embraced by any keen driver for plenty of reasons.

Chief among those reasons is the fact that it represents an important beginning. It’s the first European-style hot hatch done with any real commitment by Toyota for an awfully long time – arguably, that it has yet attempted – not to mention the first GRMN-branded performance special ever to be built, developed or sold on European shores.

That acronym – which trips about as lightly off the tongue as an armour-plated cough sweet that’s been glued in place – stands for ‘Gazoo Racing Meisters of Nürburgring’, and it’s the branding that all of Toyota’s most performance-focussed models will share. The ‘Gazoo Racing’ part is the important bit. Toyota founded what has become its de facto factory motorsport and tuning arm last year when it returned to the World Rally Championship and will offer performance-tuned models under that banner at several discretely positioned levels, with the GRMN ones at the top of that hierarchy.

This Toyota Yaris might strike you as an odd car for Gazoo Racing to have chosen to get this particular ball rolling though, since it’s a limited-series offering of which only 80 examples will make it to the UK (only 400 will be sold in the whole of Europe) so it’ll be a particularly rare sight on British roads. In tandem with that kind of rarity, you’d expect an ambitious price, and in this case, it’s £26,295. Ouch.

However, Toyota sources suggest that full-fat GRMN models will continue to be limited-series productions, priced above what you might consider to be their closest rivals. Toyota, for the record, doesn’t think the Yaris GRMN has a natural rival – though it also concedes that there are quicker and more powerful hot superminis you could buy. Which sound like rivals to us. 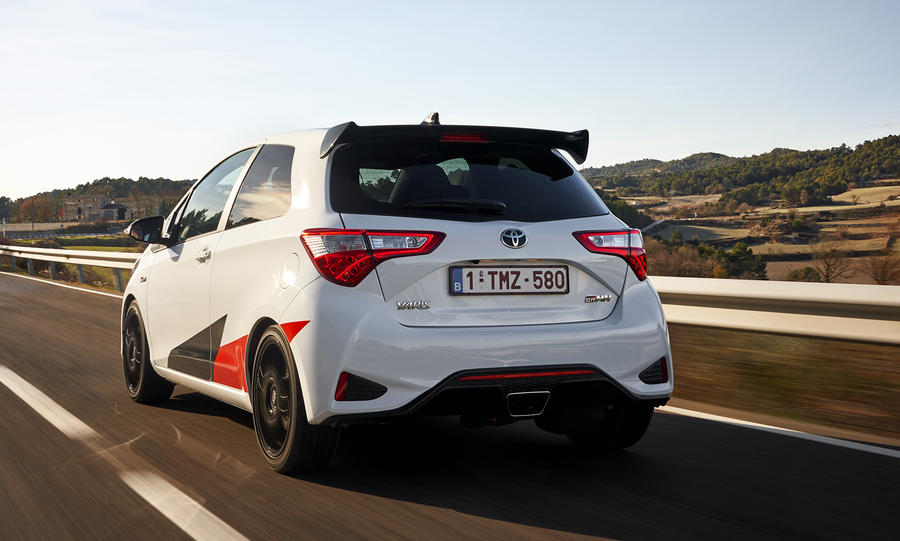 The performance makeover the Yaris has been through in order to make it to GRMN status is an impressive one, though not as thorough as the company might lead you to believe. Having braced the hatchback’s body-in-white in key places, Gazoo Racing has fitted shorter suspension springs (up 60% on spring rate compared with those of the standard Toyota Yaris) and some rather special Sachs Performance dampers, as well as a fatter anti-roll bar up front. Forged 17in alloy wheels from BBS save 2kg per corner on standard Yaris specification, are wrapped with 205-section Bridgestone Potenza RE050A performance tyres and are equipped with around-uprated disc brakes and four-pot front calipers.

The steering rack has been quickened, too. But there are no widened axle tracks here and no lightweight suspension arms or dedicated knuckles of the sort we’re beginning to see on hot hatches at this level, which allow car makers to adjust ride height and suspension roll-centre position more freely and independently of each other. The Yaris GRMN's rear suspension, like that of the regular car, is by torsion beam.

The engine ought to be a strong selling point: a supercharged 1.8-litre petrol four-pot built by Toyota in the UK but tuned by Lotus to a similar specification as the ones that power the Lotus Elise. Producing 209bhp, just shy of 7000rpm and 184lb ft of torque, it makes a refreshing change from the smaller-capacity turbos that power most cars within this class. And, fitted with a centre-exit exhaust designed especially for the car, it sounds great when it’s working hard: waspish, brassy and slightly rough-edged. It’s as if this Gazoo had a giant kazoo, and blew it for you just as you wanted it to (and if you don’t like it, boo to you too).

The Yaris GRMN has some excellent ‘ultrasuede’ sports seats that hold you in place very securely. A pity, then, that the place in which they hold you isn’t quite where you’d ideally like to be. You sit high at the controls, close to the pedals, and with a provision for driver leg room that anyone taller than 6ft 2in will likely find troubling. But somehow, the car also fails to give you quite enough steering column reach adjustment, and its pedal layout also puts too much fresh air between brake and accelerator to make for easy heel-and-toeing, which is something that drivers in the market for a performance car of this focus and flavour are likely to want to do.

In broader terms, plenty might find fault with the car’s perceived cabin quality, given the price they’re being asked to pay – the fascia is undoubtedly dark, plain, antiquated and cheap-looking in places, although that’s likely to bother those primarily interesting in the driving experience less.

That Lotus-tuned engine certainly proves a fine advert for the road less travelled where a fairly light hot hatch is concerned, and it's perfectly at home in a car that loses little for not being the most brutally fast thing from point to point. The Yaris GRMN doesn’t have the low-down torque to bludgeon its way down short straights with the vigour of something more powerful and expensive, but its engine responds very crisply, revs with rapacious zip all the way to its 7000rpm redline and makes the accelerator feel like it operates in an entirely analogue and linear dimension (unlike that of so many big-boosted turbo rivals).

On ride and handling, the Yaris makes a decent effort out of a poor start in life. Being unusually tall even by supermini standards, the Yaris plainly has a high centre of gravity and so doesn’t exactly dive into bends with the agile glee of a Mini Cooper S or a Ford Fiesta ST. Instead, it takes a brief but perceptible instant to settle on its outside wheels before changing direction and doesn’t point and rotate underneath you in quite the same puppyish way as those key rivals.

But that’s not to suggest the car isn’t an engaging, lively type. If you set about the Yaris’s meaty controls, working hard to shift its mass around during cornering and wringing every available rev out of that engine, it rewards you plenty. The car has a very simple, likeable, old-school performance vibe because it has passive dampers and a manual gearbox, makes real engine noise, and has but one driving mode. And, frankly, if you don’t like ‘up and at ‘em’, you should have bought the Yaris Hybrid.

The Yaris’ body control is very good and its damping superbly tuned, allowing enough short-wave suppleness to keep the body settled over smaller lumps and bumps but checking it firmly over bigger ones. Steering is feelsome and true, although it weights up unhelpfully when you gather the car’s weight over its front axle, and it can squirm and fight a bit when the slippy Torsen differential is attempting to put all 184lb ft through the outside front wheel.

Also, although handling isn’t as adjustable as in the very best hot superminis, the Yaris’s attitude can be manipulated a little with a mid-corner dab of the brakes. So, on road, just as it is on track, this car’s a lot of fun. 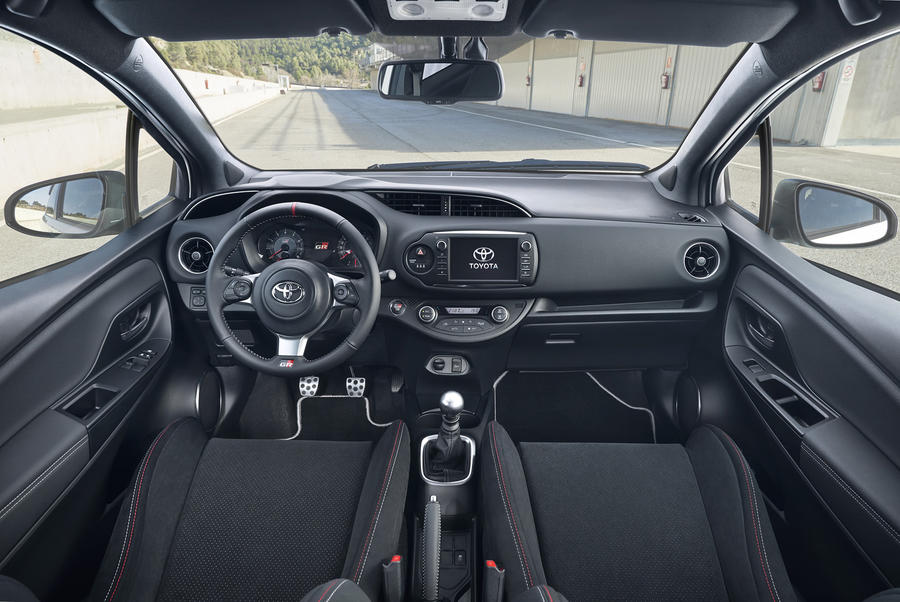 Whether, warts and all, this amounts to a supermini worth paying £26,295 for is a touch doubtful but mostly irrelevant. The Yaris GRMN is effectively sold out (although company insiders suggest there may be one or two in UK dealer stock if you look hard enough). This tester’s money wouldn’t go on one, but that’s because I’d be put off at least as much by the WRC-homage paint livery as the price. As something to simply enjoy on a Sunday morning moorland blast, however, there aren’t many hot hatches I’d sooner drive.

What matters most is that Toyota has created a true driver’s car worthy of an enthusiastic following here, and that augurs very well for things to come, particularly when Gazoo Racing turns its attention to a more promising base car: say, just for argument’s sake, next year’s new Supra.

We clearly shouldn’t expect those future GRMN models to be cheap, but they’re equally unlikely to be ordinary. And amen to that. 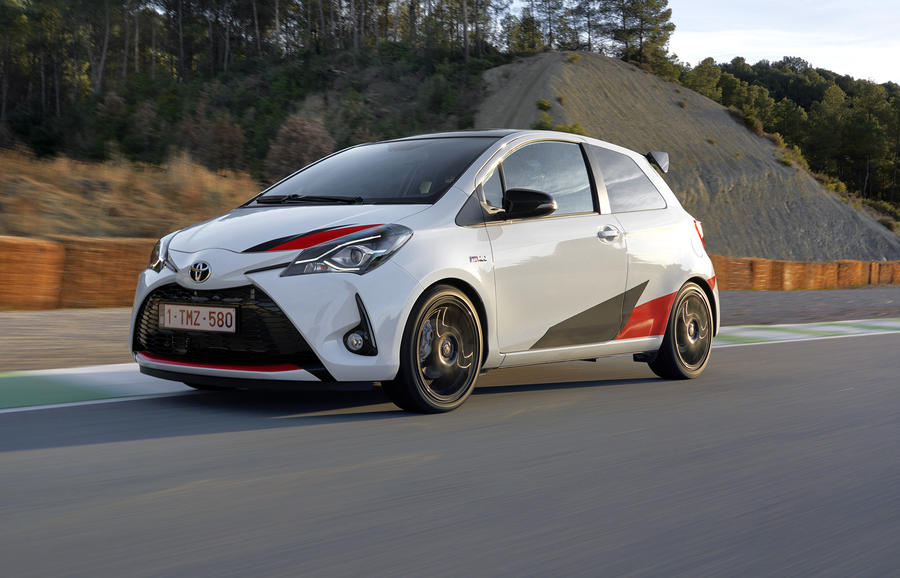 Has about as much visual

Has about as much visual appeal as a wet mop - how much longer can toyota get away with such mediocre designs as this?
michael knight 12 January 2018

Yep, me too - actually very satisfied owner of a 5-door SSS 1.6 - although the new Sport 1.4 Boosterjet does not seem to play in the same power-league, its incredible low weight (970 kg) would certainly counterbalance the need for more than 140 hp.