BACK TO ALL NEWS
Currently reading: Ford Focus RS Mk1 and Mk2 driven - former glories
UP NEXT
Testing the UK's newest circuit in a Porsche Cayenne Turbo GT

Imagine the luxury. Pre-‘One Ford’, before the age of austerity, imagine being in a position to not only develop a hatchback just for Europe but also decide that, when you want a hot version of it, you’ll pull it away from the production line for finishing, in expensive fashion.

Thus was the 2002 Mk1 Ford Focus RS: unique bodywork, a limited-slip differential, carbonfibre added to the interior and a tasty turbocharged engine.

Read our review of the latest Ford Focus RS

Someone signed off the prospect of building 4501 of them and selling them at the remarkably low price of £19,995, which seems too good to be true now. For Ford’s bottom line, it was quite bad, but it did revive the RS brand to considerable effect.

I remember driving one on the Cat and Fiddle road at its launch and, mid-hairpin, applying more power. The Quaife limited-slip diff would hook up and pull the front wheels into the corner – a remarkably unusual thing for a front-driver. There was more torque steer than in practically anything but a  front-wheel-drive racing car, and it didn’t please everyone. Not just the accountants were miffed. 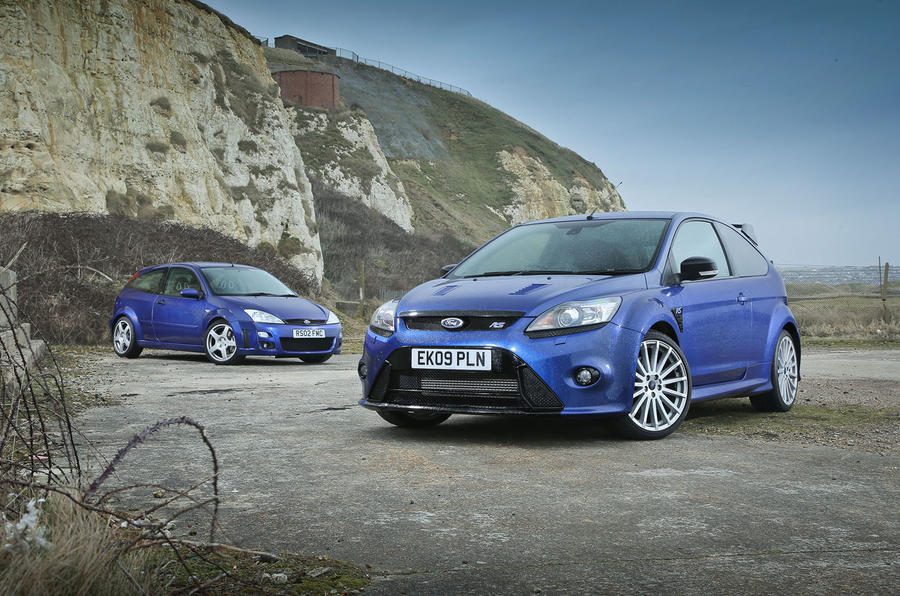 It was no surprise, then, that when the Mk2 Focus RS came around in 2009, things were a bit different.

Ford wanted to make 8000 of them over two years and, crucially, make some money out of them. More than 4000 came to the UK alone, priced from at least £26,995, so it made money, despite the fact that it felt fairly well removed from the standard Focus. Mechanically, it wasn’t, though – not by as much as the first one, at least.

Sure, it had fattened arches and a limited-slip diff, but it rolled down the same production line as the regular Ford Focus, which makes a huge difference to the production cost.

That meant Ford could afford to be a little liberal with some of the hardware, so it gave the RS RevoKnuckle suspension on the front struts, to cut the torque steer that would come with 301bhp and 325lb ft.

RevoKnuckle is a different name for a similar system that Renault and Vauxhall use and it’s worth going over it again. In a normal strut, the whole shebang pivots around the spring strut itself. Which is fine but, when you consider how much torque steer the 212bhp, 229lb ft Mk1 Focus gave you, you can imagine what the Mk2 would be like.

Without a limited-slip diff, some full-throttle energy just scrabbles away into the ground. With an LSD, though, both tyres are hunting for grip and finding it, tugging the steering this way and that while they’re doing it.

It sounds more complicated than it is; the shortened distance is like pushing near the hinge of a door rather than at the handle. The same force moves the door less.It still moves it a bit, so the Mk2 torque steered, but that wasn’t the worst of it. We ran one for 12 months and about 15,000 miles, during which it got through three sets of front tyres. We gave it the beans quite a lot, I suppose. But still, that was the disadvantage of the amount of power and torque it had to deliver. But what a powerplant it had to deliver it. 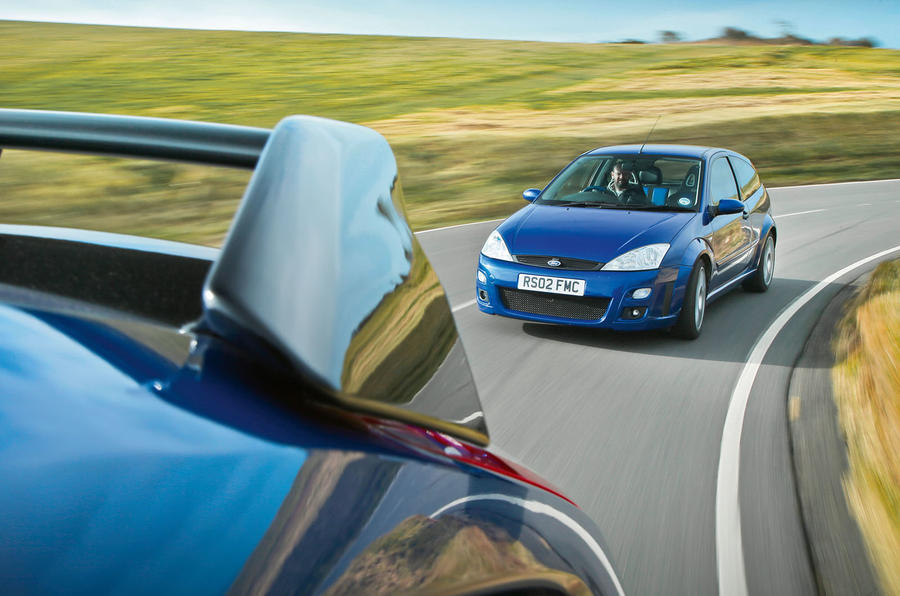 The first two RSs reflect the state of the automotive business at the time. The early 2000s were freer, so a halo model could afford to have a holed business case.

The second RS couldn’t, but it did take advantage of the fact that until 2009 Ford had owned Volvo, whose 2.5-litre five-cylinder engine the ST and RS had developed. And it was a humdinger.

Today’s One Ford RS will reflect today’s car market, too. It’ll be sold everywhere and get by with a 2.3-litre four-cylinder engine. But because global ambitions mean Ford has a platform that can accept four-wheel drive, its engineers figure it might as well use it. So no five-pot, no trick front suspension, but four-wheel drive. Swings and, indeed, roundabouts.

The imminent arrival of the new car was also a good enough reason to wheel out the old stagers and see how they stack up today. 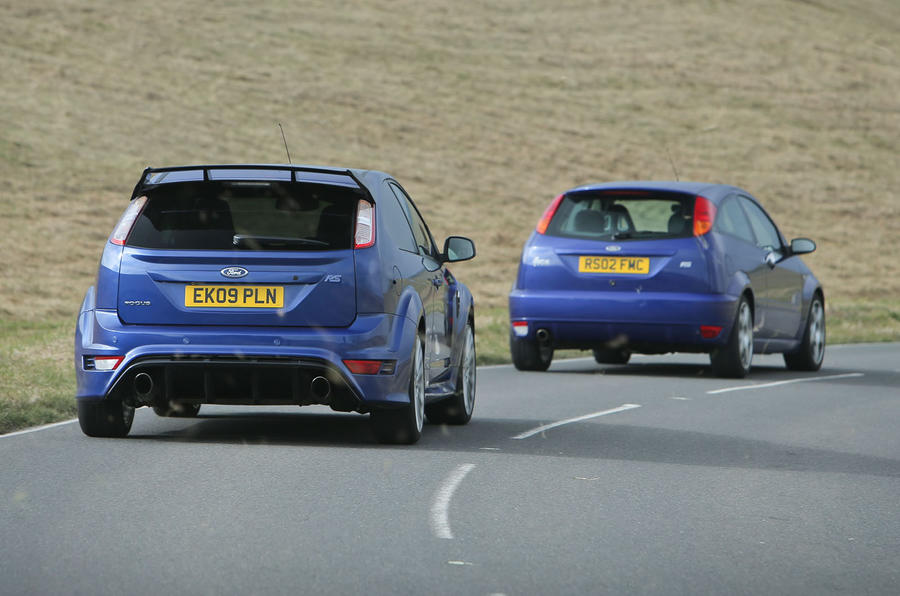 When it comes to the Mk1, I can understand those who thought it was too much – that it tugged too much, was too unruly – but I’m willing to forgive it everything today, because now it feels rare and unusual. And where it engaged then, it still does now. The ride is firm, the responses brutal. There’s a touch of turbo lag, it has a deliberate five-speed ’box and it bruises its way down the road. It was like nothing else available at the time, which helps to cement its place as a classic car now.

The Mk1 is not a car you’d wilfully hop into at the end of a long working day and drive three hours home in the pouring rain, yet the Mk2 RS is just that sort of big-hearted car.

It rides well, it has big, comfortable seats and, yeah, although the interior is feeling its age a bit, it has all the right luxuries and will hold a cosy inside temperature and a clear windscreen and settle into a refined cruise.

Don’t think that it isn’t a sporting hatch at heart, though. Thanks to its trick suspension and better tyres, it feels almost as agile as the first car and is better behaved. It’ll still tuck its nose in if you lift on the way into a corner and unsettle the rear, and it will find more traction than you’d credit, given the power.

It feels far more than an ‘ST Plus’ – Ford’s lesser-powered hot hatch also used the 2.5 turbo, remember – but the intrinsic Focus character is intact, just as it was the first time around. The RS just enhanced it, muscled it, added serious ground-covering pace and engagement to traditional (by which I mean good) Ford dynamics. Another one of those and we’ll have yet another future classic on our hands.

Focus Mk1 is certainly a classic car now, interior has not aged well at all but externally it looks as fresh as ever, hard to believe it is coming up to 20 years old and is also only a few inches bigger than the current Fiesta. Would be interesting to see the next batch of Ford hatchbacks take a bit of inspiration from the Mk1 Focus too, it still has the neatest tail light/hatch arrangement.
Ofir 14 November 2015

The most notable figure is

The most notable figure is 200 kg up in the MK2 and a 100 hp that barely makes up for it. Also, at the time I struggled to understand why Ford didnt bother to develop a six speed box for the MK1 as the ST featured one but now I think it was probably better for it.