From £54,6498
The Toyota Land Cruiser gets a raft of revisions, aimed at keeping this heavy-duty 4x4 near the top of the rugged SUV pile
Open gallery
Close

I think part of the appeal of a Toyota Land Cruiser is that you can take it anywhere. I don’t mean ‘anywhere’ as in ‘it can go anywhere’, although obviously it can. No, I mean ‘anywhere’ as in: to the shops, to a client meeting, to a shoot or building site or the theatre or a Pony Club rally, where at any of the above a Land Cruiser would say precisely the same thing about you: next to nothing.

Toyota’s biggest, baddest and most luxurious and expensive off-roader – for the UK, at least – is, then, the most curious of things, the classless car, capable of doing everything, but shouting ‘nowt while it does it, except that you bought it because you need it. 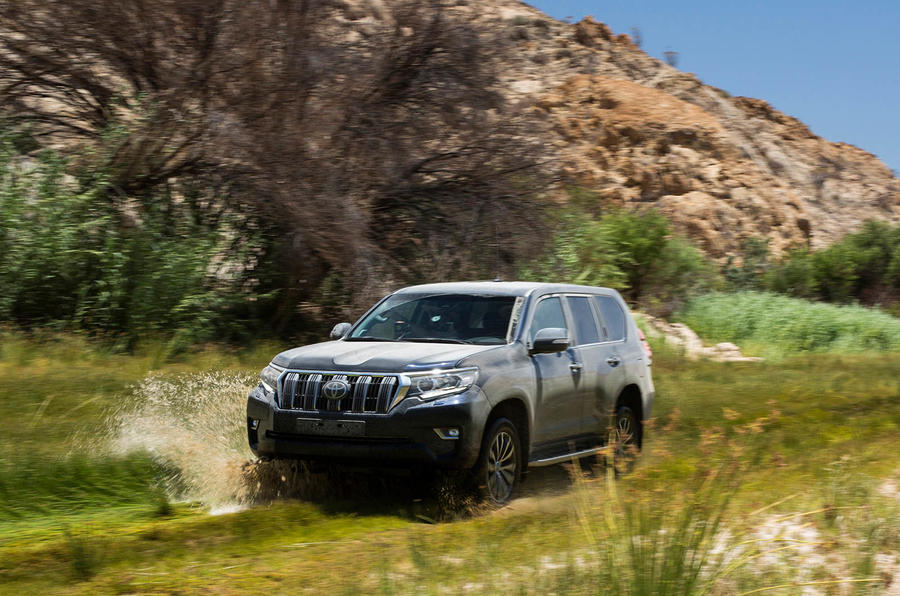 Anyway, now, this car, which was introduced in this form in 2009, and which has had a couple of minor changes since, has for 2018 been rather more heavily revised to try and keep pace with its rivals, nearly all of which have been entirely replaced, platform and all, since then: the Land Rover Discovery (the key rival even away from a JLR-centric UK market), the Nissan Patrol (absent from the UK), Jeep Grand Cherokee, plus other ‘luxury’ focused SUVs like the Volvo XC90, BMWs, Audis, Mercedes and, well, everyone who offers a big 4x4, which is pretty much everyone.

But notwithstanding all of the rivals, the basics of the Land Cruiser are what they still were. It has a body on frame construction, albeit 11% more torsionally rigid than it was, with a few minor tweaks the outside, to aid cooling, and higher wings to help you place the edges of the car.

There are 3dr and 5dr body styles, with five or seven seats, all of which can be had in the UK in trim levels stretching up to Invincible, which costs £52,295 as a 5dr, which is how they’re mostly bought in Britain. In an effort to get as much value as it can from the model, though – and perhaps spotting that the Land Rover Defender is no longer available (for now, at least) – Toyota is now introducing a more basic, workhorsey variant, too: the ‘Utility’ version can be had from £32,795 as a three-door manual. Whisper has it that the body-on-frame’s versatility, from a many-body-styles perspective, hasn’t gone entirely unnoticed at Toyota either.

Power comes from a 2.8-litre diesel engine (in Britain that’s all we get; other markets can have bigger petrols and so on), tweaked by a new, smaller, turbo, and urea exhaust solution combo, and it makes a steady 174bhp, driving all four wheels through either a six-speed manual or auto gearbox. The more important number is 331lb ft, which the big four-cylinder makes at just 1600rpm, but it remains a fact that acceleration is not this car’s theme: it weighs 2430kg and can tow a three-tonne trailer.

It’s also now even more capable off-road, says Toyota. There is a low range transfer box, naturally, while Toyota has cleaned up the Land Cruiser’s interior, in part to accommodate some additional 4x4 functions. The central screen is larger so you can see external camera views, as is a digital output between the dials, to aid control of a ‘multi-terrain select’ system that, effectively, allows more slip before the traction control intervenes, depending on what terrain you’re on: in Rock you want no slip at all, in Mud and Sand you want lots. There’s a crawl-speed cruise control called, er, crawl-control, imaginatively, which can tickle the Land Cruiser along at barely any speed, while a torque-sensing, and locking-centre differential is standard and a new rear-differential has become an option: previously the rear diff would be an open one or optionally a locking one, but now a torque-sensing Torsen limited-slipper has become a third way, and was fitted – as was air suspension, so the body could lift – to our test car.

Land Cruisers have independent front suspension, but the rear is a four-link setup holding a solid live rear axle. It’s reckoned that’s more rugged than an independent rear setup although, traditionally, that comes at the expense of road manners. Let’s see. 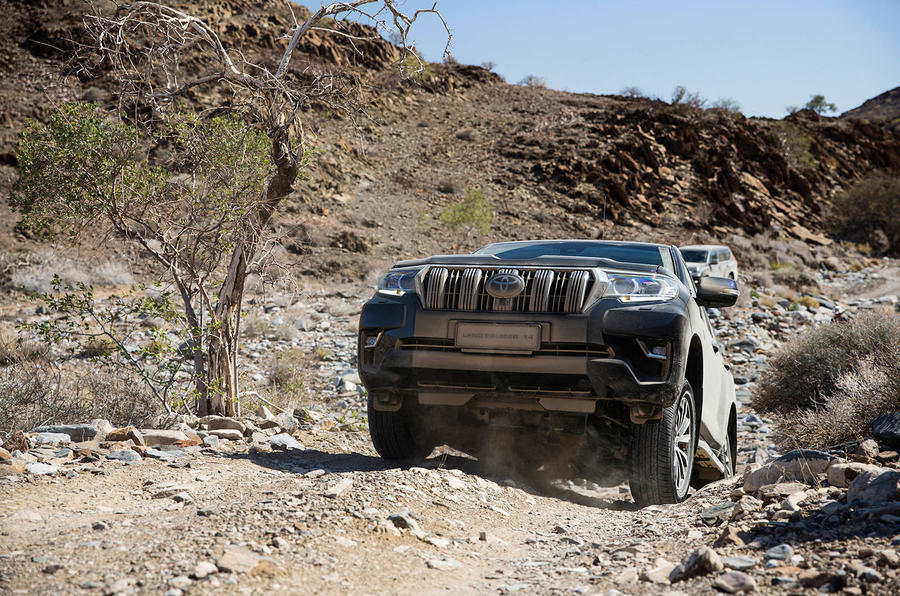 The thing to remember about the Land Cruiser is that in the UK, or western Europe in general, we’re not exactly Toyota’s number one priority when it comes to making it, a fact you can take positively or negatively, as you prefer.

The Land Cruiser is a Toyota Japan not Toyota Europe production, and markets like Australia, the middle east, Africa and south America are where it dominates, and for where it’s made. Toyota sells vastly more Land Cruisers to the UN and NGOs than the 600 or 700 it sells to the UK each year. Part of Japan’s financial contribution to the United Nations has been in Toyota Land Cruisers rather than cash. So how it creeps around a Waitrose car park is some way down the development pecking order, but I think that’s fine.

What you’ll get, then, is a car where the priorities lay in making sure it works on the button, and keeps working. So, sure, a large-capacity four-cylinder engine is less smooth than the vee-somethings you’ll find in its rivals, but there’s little faulting the delivery or, for the most part, the ‘box it drives through, apart from the occasional jolt between gears in low ratio, and a 194g/km CO2 rating. A 3.0 six-cylinder Land Rover Discovery isn’t a great deal better, at 189g/km, but it makes 255bhp. The Land Cruiser’s quiet enough, mind; please don’t think that at you wouldn’t define it as an executive SUV. If a four-pot is good enough for Volvo it’s good enough for a Toyota in which any audibleness seems less out of place.

If there’s an area where the Toyota is shown up by an Volvo XC90, mind, it’s in its interior. Then, so are most restaurants, compared to the Volvo. The Land Cruiser’s cabin features too many shiny materials and black plastics for it to stand comparison with the best cars in this class, albeit it’s well-equipped. There’s up to triple-zone climate, leather heated and cooled electrically-adjusting seats, two decent-sized seats in the boot, now folding flat into the floor rather than hinging up at the sides and, after you’ve topped out a Cruiser at £53k, you won’t find a huge number of options left, unlike with, say, a £60k Discovery and some other rivals. 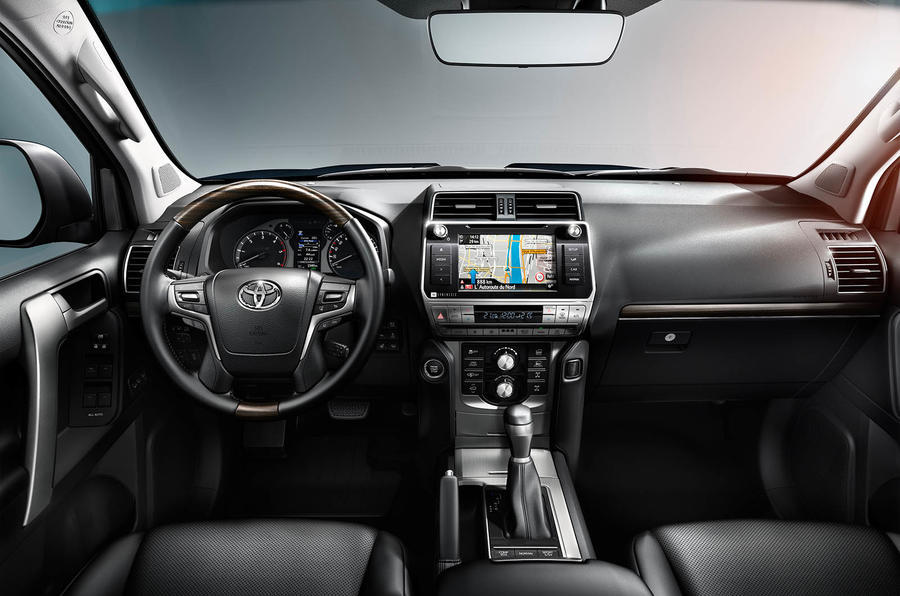 Other numbers? Off-roading angles (versus Discovery) are: approach 31deg (29), departure 26deg (27), breakover ramp angle 22deg (21) and a ride height of 215mm (284mm), a difference I suspect down to the proximity of the Land Cruiser’s solid axle. The Toyota can wade through 700mm of water (Disco 900), but what you’ll find on both is that you’ll reach the limits of tyres before the rest of the dynamics, where the electronics back up the hardware to good effect. Crawl control is particularly clever: rather than just setting a speed, it can activate from stopped and, even if with the throttle and differentials locked the wheels are spinning, it’ll ease power to each individual wheel in turn to find grip at a corner, where a locked differential might not.

On the road, the Land Cruiser’s more earthy elements are, perhaps, more evident. The steering’s light and turns the wheels, but is no more satisfying than that. On higher-grade models you can adjust damper stiffness and there are hydraulic links between corners to maintain as much flatness as possible, though I’m unconvinced it shows quite the road sophistication as a German monocoque alternative, but that’s no great surprise and certainly no shame. Ultimately the Land Cruiser’s refined and comfortable enough to spend your days in, has great big seats, a fine view out and a good entertainment system: what more do you want of a 2430kg 4x4 that can drive up a mountain?

Context is everything, as ever. Given the state of the market, it would be naïve of us to think that interior comfort and ambience and appearance don’t matter. Given what Toyota wants the Land Cruiser to do, and how many countries it wants it to do it in – it was sold in 195 at the last count – it’s as unreasonable to expect it to feel as sophisticated and isolated as an Audi Q7 as it would be to expect a Q7 to be the car of choice for an Australian bush guide. They come at an ostensibly similar job from rather different ends.

So if you live in town and value road manners and luxury-feel beyond all else, while occasionally needing off-road towing, the Land Cruiser’s maybe a three-star car. If you live in the outback and need an over-engineered car you can spend days at a time in and that has, above all else, trustworthy mechanicals, maybe it’s a five star car. What say we split the difference and call it four. Sound fair? 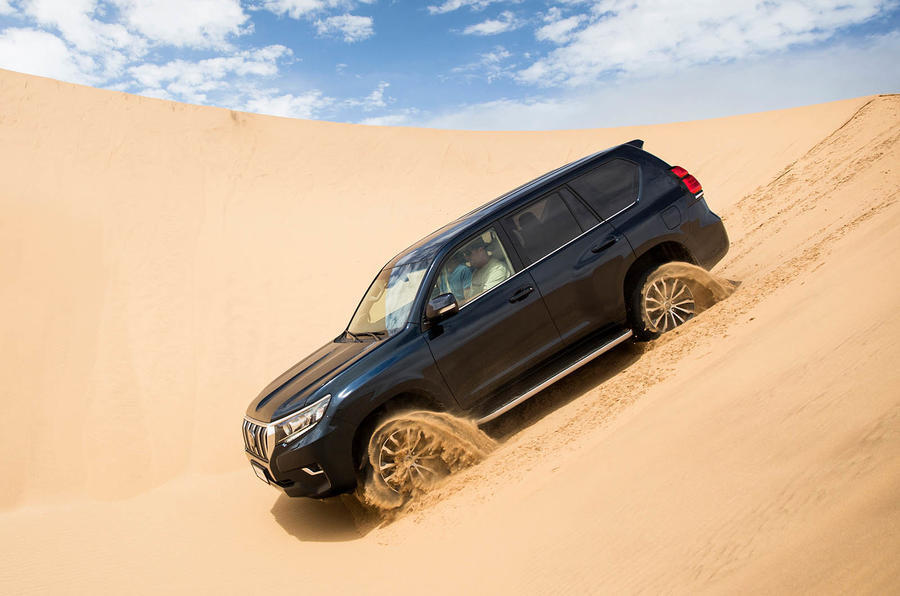 I live on a boat and keep bees.  I drive down the crappiest country lanes to my boat while needing to carry 300kg of coal and wood to my boat.  The farm fields I drive in to go tend to the bees have no roads - I make them.  Or the tractors do...  Few cars can do what this can - and keep coming back for more.

Tried the X5 - it's nice,  but I doubt it can handle what I throw at it.  And a Land Rover?  HA HA HA!  Yeah, not touching it with my boat's barge pole.  Only a fool would read the countless stories about their "reliability" and still buy one.

In short, I don't care about looking cool.  I need a workhorse that I can cart coal,  bee equipment, kids with - and equally drive to the office in comfort.  The centre console fridge is great, a cold Coke is always to hand when you are stuck in traffic.

Nope, let the yummy mommies drive to the school run in an X5 or LR.  I need a car that I can rely on and take the worst the English and Welsh farm lands and roads can throw at it - and keep coming back for more.

I have to agree with many of the comments above, in base spec, this is a superb car. However, why can't we have the same rugged dependability in a smaller package? This is too big for most UK roads, let alone car parks.

Autocar quote " markets Australia, Mid East, Africa and S.Amderica where it dominates"  Yes it does for a number of reasons but one especially- the air conditioning units works even in 50C plus and high humid or dry conditions. A things which is failed by almost all others.

Of course you also MISSED a point of sales. I dont have at my finger tips the market penetration numbers - but I reckon that Russia outsells ALL and each of those mentioned. Oh but of course Autocar like the rest of most the world has its nose in the air when the signpost points to Russia. How BLIND can you be as well as ignorant