From £17,2657
Share review
With right-hand drive models due later this year, we drive a left-hooker on UK roads for the first time
Share
Open gallery
Close
by James Disdale
14 June 2019

It’s a diesel engined example of Skoda’s new Scala, which we’ve already driven in flagship 1.5 TSI petrol form. If you missed the recent arrival of the new Czech hatchback, as a quick recap it’s effectively a replacement for the worthy yet rather rudimentarily engineered Rapid. The Scala aims to deliver VW Golf-rivalling looks and space, but at a price that’s more affordable. Based on that description you’d think it was a replacement for the even larger Octavia, but it’s not - and here’s why.

Unlike its bigger brother, which uses the same scalable MQB architecture as the Golf (and the Audi A3 for that matter), the Scala uses a stretched version the less sophisticated MQB A0 platform, which underpins the smaller VW Polo and Audi A1. So what we have here, in engineering terms at least, is very big supermini - big enough to have more than enough space for five adults and a cavernous 467-litre boot.

Still, it’s a classy looking thing, with bold creases and a prominent grille that gives it some serious presence. A particularly eye-catching touch is the rear window glass, which extends down past the rear lights and just above the number plate. This SE L version also gets LED headlamps, Audi-style sweeping indicators and 17-inch alloys.

The interior is arguably even more impressive, with slick design and fairly generous helpings of standard kit. There are some cheap and hard plastics to be found lower down in the cabin, but most of what you see and feel looks good and is soft to the touch. Further praise goes to the intuitive and clearly laid out 9.2-inch infotainment system that ‘floats’ on top of the dash, and SE L models have a virtual cockpit TFT instrument cluster as standard.

While its neatly executed exterior and interior might come as a surprise, the 1.6-litre TDI lurking under the bonnet won’t. It’s a fairly long standing staple of the VW Group and is currently the only diesel engine available in the Scala, but, with 113bhp and 184lb ft, it delivers competitive numbers and promises up to 57.7mpg when mated to a six-speed manual gearbox.

The rest of the package is pure MQB AO, which means strut suspension at the front and a torsion beam rear axle. However, our car also came with the optional adaptive dampers, which could go some way to sorting the standard car’s somewhat jittery ride. 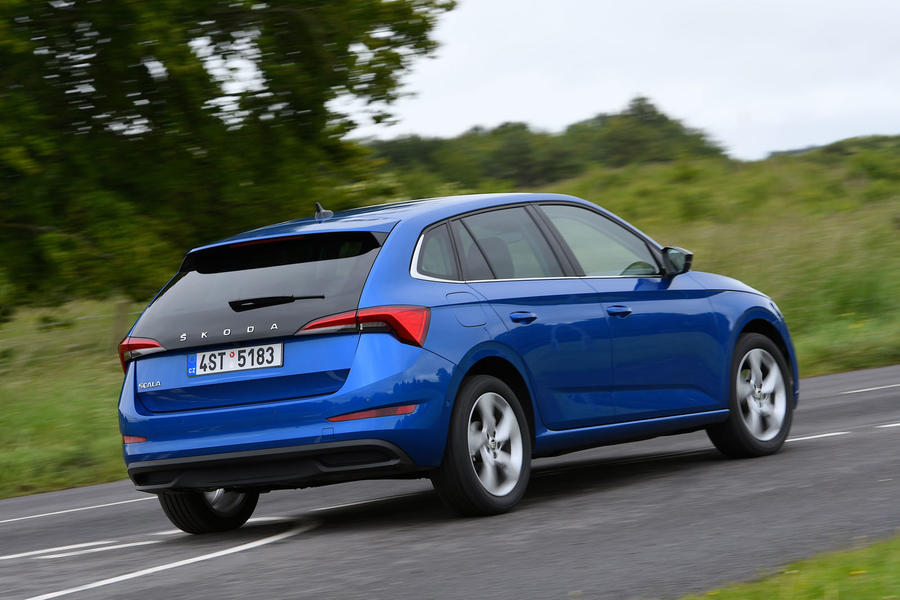 The recent decline in diesel sales has hit smaller cars in particular, so much so that it’s not often we drive non-petrol or hybrid models from this end of the market these days. As a result, the way the Scala diesel clatters from cold comes as a bit of a shock, and, while it quickly quietens down as the engine warms through, you never forget this is a compression-ignition motor. Under load there’s a gruff grumble from under the bonnet, plus there’s always a faint tingle through the steering and pedals - even at fairly relaxed motorway speeds.

On the plus side, it’s a keen performer. Maximum torque is fairly muscular 184lb ft delivered at just 1,500rpm, so you can make reasonably swift progress even when short-shifting through the slick, short-throw six-speed manual gearbox. Not that there’s much point revving the 1.6-litre TDI to its limit – it sounds strained and all the useful work is done by 3,500rpm. Taking things steady is better for fuel economy anyway, and we saw 70mpg on the trip computer on one gentle cross country run.

The rest of the Scala is the same as the petrol, which means it’s a competent yet slightly uninspiring machine. Quick, precise and naturally weighted steering makes it easy to place, and there’s decent grip and good body control even when pressed hard over fairly tortuous roads. Yet it lacks the sheen of sophistication of the larger MQB cars and its electronic systems don’t work with the same unobtrusive brilliance - you can feel the Scala’s torque vectoring furiously braking wheels to keep the nose locked on your chosen line.

As if to highlight its less polished platform, even with the optional adaptive dampers in their softest setting, the Skoda still has traces of the stiff-legged and brittle-edged ride that afflicts the standard Scala. A VW Golf on Dynamic Chassis Control will feel much more plushly damped when compared on the same stretch of tarmac. 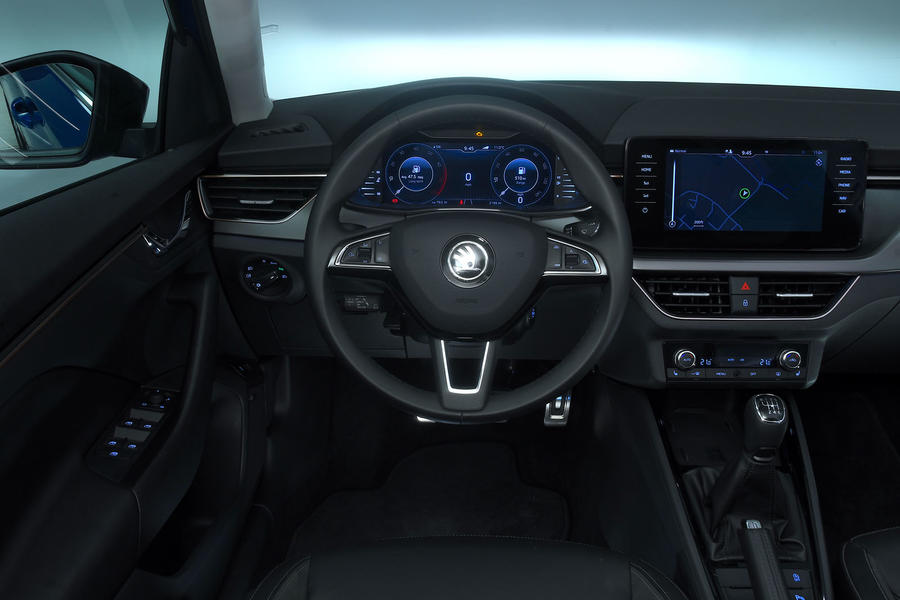 It’s not an exciting car, but there’s still a lot to like about it. It’s smartly styled inside and out, comes generously equipped and delivers more space than almost anything else for the money.

The Scala is also packed with those neat Skoda touches, such as the umbrellas secreted in the doors, the ice-scraper behind the fuel flap and numerous bins and boxes for the endless odds and sods of family life. As a family car it’s very easy to live with, plus it’s leagues ahead of similar value hatches such as the Fiat Tipo.

However, if your heart (or more likely head) is set on a Scala, then we’d probably dodge the diesel in favour of the sweeter and smoother 113bhp 1.0-litre TSI petrol. Not only does it feel more eager on the road, in the real world it’s not much less efficient, so you’d have to be doing big, big miles before you offset the TDI’s near £2,000 price premium. 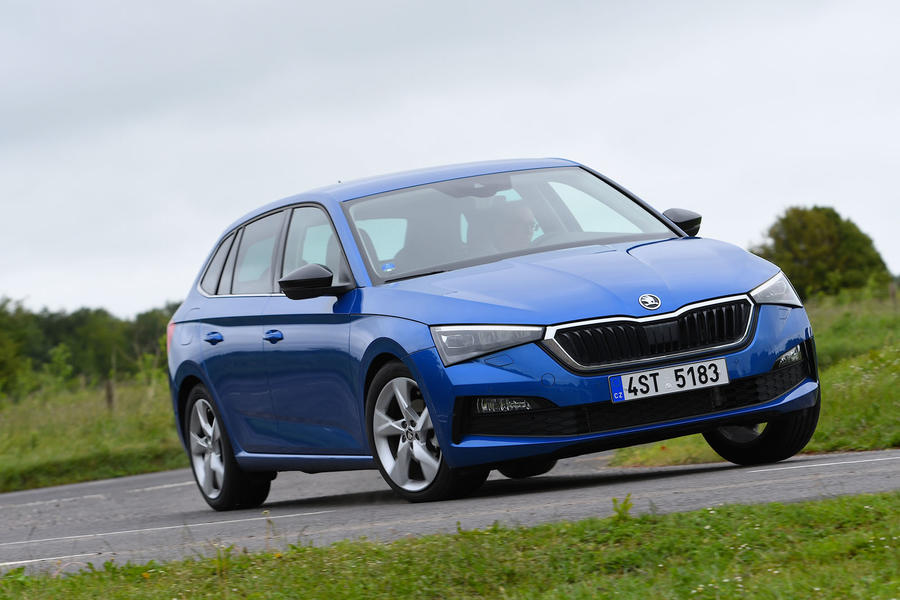 i think that is the ugliest car released in the last decade!

i think that is the ugliest car released in the last decade!

No way man, miles off.  It's no beauty, but I can think of so many Audis, BMWs, Mercedes (especially those sports-coupe SUVs like the X4, X6, Q2, etc.) that have emerged over recent years that are far more hideous.

A lot of praise in the review

A lot of praise in the review for its styling both inside and out but to me inside is bland and dour and the outside isn't much better with the headlights and grill looking like they've melted and slid down the front. The rapid was more taught and better looking to my eyes even if it wasn't as good.

Not so generous spec...

I don't think the spec on the Scala is generous at all. You have to pay extra for curtain airbags, parking sensors, adaptive cruise even on this top spec SE-L model. There clear as day on the Skoda configurator. Once you've added all that up, an auto is in excess of £24k. Doesn't seem like value to me.

Seems like an alternative to a Dacia Sandero. Its big for a supermini, but underneath thats exactly what it is. Only problem with the Sandero comparison, this thing is 50% more expensive.

Looks ok, but the Scala is too expensive for the dated technology underneath.

Not exciting, but I can

Not exciting, but I can understand the VAG logic to have a budget hatchback option, rather than just producing 4 clones

It's a bit strangely

It's a bit strangely proportioned and ugly. Then again most new cars are so it'll fit in. The Rapid was rubbish out of the city and had a weird wallowly ride at the back so hopefully this might be a bit more talented.