This, as I’m sure you’ll be well aware by now, is the new Skoda Scala. Even in the mid-range SE specification we’ve got here (previously we’ve only tried the top-tier SE-L model), you have to admit it’s a fairly sharp-looking thing. Not too flashy, not too nondescript - it’s just about spot on for someone in the market for a completely unpretentious, affordable means of transporting a young family to and from the sorts of things young families need transporting to and then from again.

And it is affordable, too. With the 148bhp, 1.5-litre TSI powerplant that currently crowns the Scala’s petrol engine line-up at its nose, this particular car comes with a price tag that’s just north of £21,000. But no one really buys cars that way any more, so it’s worth pointing out that on a three-year, 45,000-mile PCP deal with a £3000 deposit, Skoda quotes a monthly payment figure of £337.

That means it sits between a similarly specced but less powerful Ford Focus Zetec (£312 per month on the same terms) and a slightly more generously equipped Volkswagen Golf Match with the same powertrain (£371). Not bad.

Elsewhere, the rest of the Scala package makes for familiar reading: it sits on an elongated version of the Volkswagen Group’s MQB-A0 platform; employs a MacPherson strut-type front suspension and a torsion beam at the rear; and directs its 148bhp and 184lb ft to the front wheels via a seven-speed dual-clutch ’box. While this isn’t the first time we’ve driven the Scala on British Tarmac (you can read James Disdale’s dispatch on the 1.6 diesel model here), it’s the first time we’ve tried one on home soil without the optional adaptive dampers. 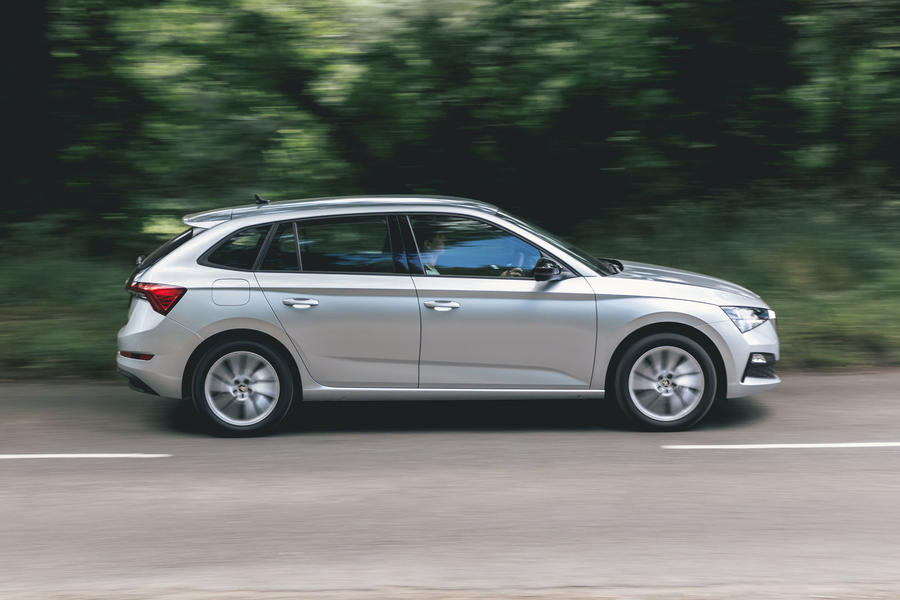 From a practicality standpoint, really rather impressive. The benefit of being based on that massively stretched platform (its wheelbase is some 20mm longer than that of a Golf, which sits on the regular MQB platform, remember) is that passengers who find themselves sitting in the second row won’t feel shortchanged in terms of space. There’s plenty of head and leg room here, and its 467-litre boot is unlikely to be a source of disappointment either. The cabin’s slightly dull, monochrome ambience might not be to everyone’s tastes but, for those buying from a purely utilitarian standpoint, the apparently hard-wearing plastic surfacing could well be very appealing indeed.

But let’s get on to how it drives, shall we? Turn the key in the ignition, disengage the manual handbrake (how delightfully old school is this?), slot the transmission into D and you’re set. Step-off is smooth and unhurried, and seemingly free from the low-speed shunting you can sometimes experience in DSG-equipped VW Group products. For the most part, the Scala is an incredibly easy, laid-back car in which to simply tool around town. However, that smooth lethargy the transmission tends to display at low speeds can make for a bit of anxiety when nipping out of junctions or attempting to join faster roundabouts - but it’s nothing a bit of additional encouragement won’t address.

At open road speeds, the ’box is far more dexterous – fluently switching between ratios as and when you need them. The 1.5-litre engine lends plenty of punch too, pulling with suitable conviction from as low as 2000rpm. It’s not a particularly charming motor in terms of character, but it’s smooth and refined - so long as you don’t allow the tacho needle to stray too close to the redline. Do so and that nasally drone typical of four-cylinder engines does become a touch penetrating.

The steering is naturally weighted and, at 2.6 turns lock to lock, reasonably responsive too. It allows you to guide the Scala through bends confidently enough, but there’s a lack of tactility about it that means you never really feel as though it’s a car that wants to be driven enthusiastically. It just doesn’t seem that interested, much in the same way a Volkswagen Polo doesn’t feel as though it’s thrilled at the prospect of being flung down a windy B-road. It’s a sensible car, designed to be driven sensibly.

Unsurprisingly, there’s a distinct sense of VW Group-ness about the manner in which it rides, too - so long as you stay on smoothly surfaced roads. In such environments, it’s a largely composed and comfortable machine but, on the battered Tarmac that makes up most of the UK’s country roads, a noticeable sense of animation - particularly from the rear axle - filters its way into the cabin.

It’s in these environments where the Scala most obviously suffers from its supermini underpinnings, where the lack of a properly independent rear suspension really makes itself felt. It’s by no means unbearable, but had you tried a Golf and then elected to go for a Scala anyway, you may feel this lack of additional polish plays at the back of your mind. 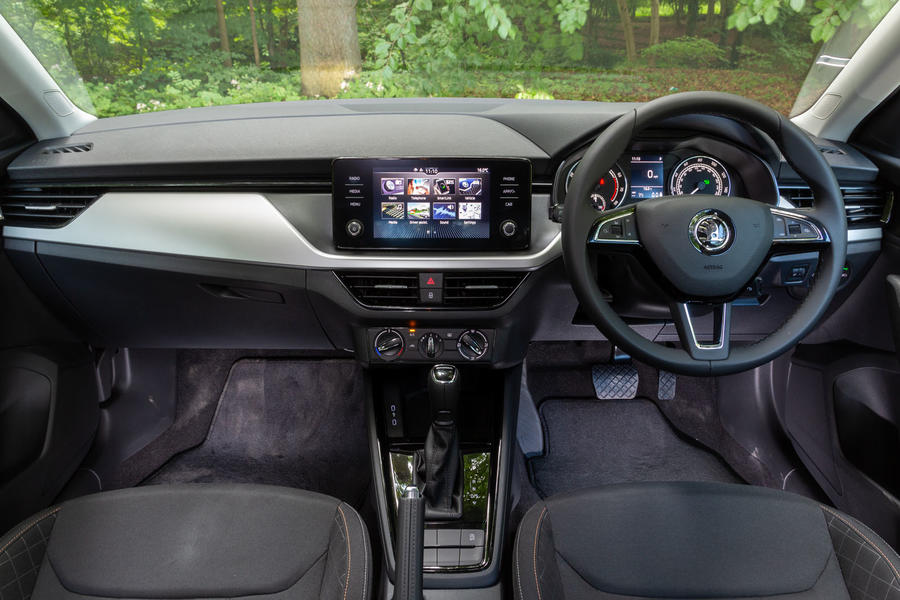 The Scala feels as though it’s been designed to appeal to those people who view their car purely as a tool, as a means of getting themselves and (quite a lot of) their things from one place to another in reasonable comfort and with little stress. And from that point of view, it’s hard to knock the Scala - it seems to nail that particular brief no trouble at all.

The thing is, so too does a Seat Leon or a Ford Focus. They might not match the Scala for outright practicality, but they aren’t far off. Both of these hatchbacks offer sweeter handling and are generally more engaging to drive, too. And as far as Autocar is concerned, that counts for quite a lot. 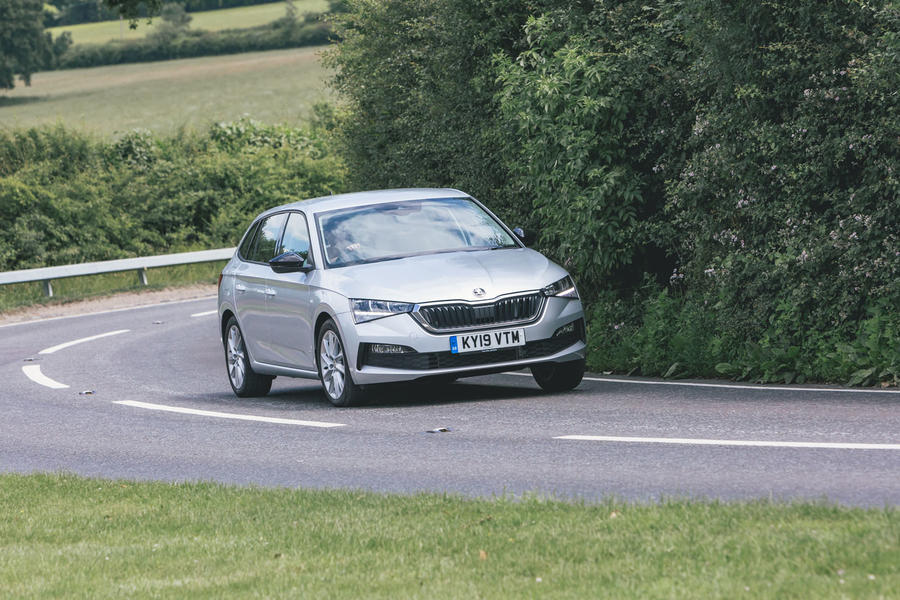 Ah, PCP is another name for car hire. "Nothing to show for it"?. You've had exactly the same use of the car as someone who shelled out the cash/loan amount for it. This magazine is for people who want the available options to buy and run cars, put in front of them. How on earth can they do this without mentioning ways and costs of running a car?.

Ah, PCP is another name for car hire. "Nothing to show for it"?. You've had exactly the same use of the car as someone who shelled out the cash/loan amount for it. This magazine is for people who want the available options to buy and run cars, put in front of them. How on earth can they do this without mentioning ways and costs of running a car?.

'had use of car', well that's obvious and all for £5,000 a year for a Skoda.   'How on earth can people work out the finance', they can do that for themselves, this is an Autocar site not a Finance one.

Just another boring and look

Just another boring and look a like V W pruduct. Stick Audi rings or Seat badge or V W badge  and no one would notice all look the bloody same. Who is in charge of overall V W group  design SACK EM Please

A ceed from the front...

...and a Focus from the back - with a bit of Volvo for good measure.

I'm sure Skoda's increasingly pretentious marketing campaigns would have us believe that this is a car for free-thinkers, but if so, there's a disconnect here - to me this is a car for non-thinkers - people who don't wish to make any kind of statement whatsoever.

A spacious, competent, reliable vehicle for non-thinkers. That's a fairly big market. Provided you haggle hard it will be a no-brainer for many.

4 July 2019
What sort of statement are you looking to make with a car? "I bought a more striking, yet over-priced and less practical mode of transport to make up for the fact I have a small dick and an even smaller brain" ?
For anyone with any common sense, a car is way of getting you from A to B in comfort and with the right level of practicality.
This one might be similar to others in the VW group, but it's a good product. People who buy cars to draw attention to themselves are just knobs!

I would feel highly depressed....

...if I'd parted with £21k for something so average. Paying £337 per month would only prolong the pain. I've not seen a less inspiring new car this year.