The Enyaq is Skoda’s take on the Volkswagen ID 4, a crossover battery-electric vehicle (BEV) based on the VW Group’s MEB electric platform, with batteries beneath the floor and, until a four-wheel-drive version arrives, a motor at the back.

Let’s deal with the numbers first, because this is a BEV so they end up dominating the description. The Enyaq is 4.65m long and 1.88m wide but looks bigger, and comes in two versions.

The additional power of the heavier 80 makes it a smidge quicker on paper than the lighter 60 but we’re talking 8.4sec versus 8.2sec for the 0-62mph sprint, and the peak torque is 229lb ft from rest in either case, so from the lights, there’ll be nothing in it.

Shortly before the on-sale date, Skoda tweaked the Enyaq’s pricing to account for the government’s recent changes to the plug-in vehicle grant (now capped at £35,000), so all 60 versions fit under it and get £2500 off their £34-something-grand list prices, while all 80 versions are over it and obtain no discount on their £39k-£42k ones.

I’ve driven both here but we’ve already tested an 80, so we’ll major on the 60 this time around. 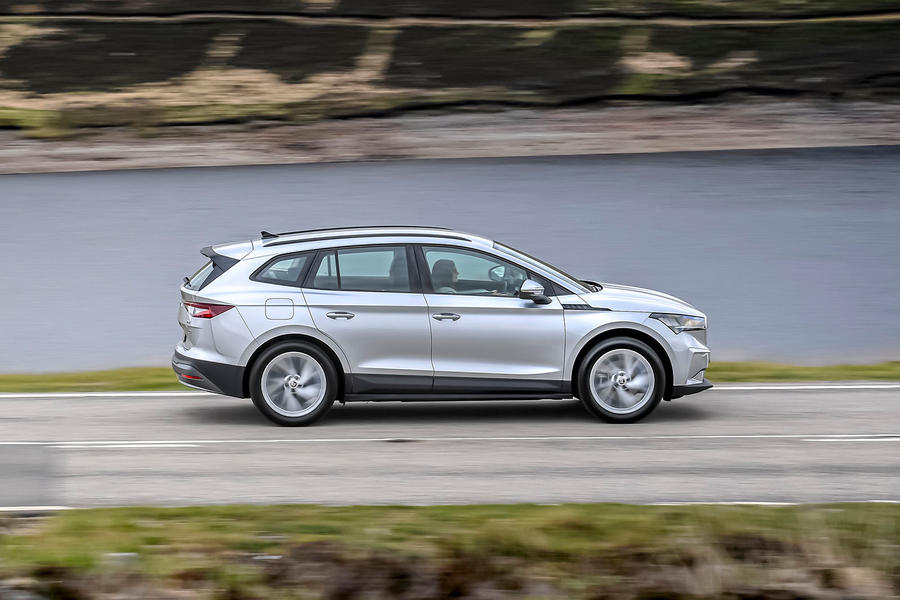 Elegant and inoffensive outside, and well finished inside. The driving position is great, the car retains a strong centre tunnel in the front, even though I suppose it doesn’t technically need one – but storage abounds – and there’s generous rear room and a big boot. Skoda does this kind of family stuff well and is sticking with its ‘Simply clever’ line of equipment – an umbrella in the door and an ice scraper in the bootlid.

A pocket for drive cables and the drive motor beneath the boot floor mean there’s no spare wheel back there but the load capacity is still 585 litres with the seats up, rising to 1710 with them folded.

There’s a pretty big glass area, too, which makes the interior airy. Most notably, the windscreen, which pushes so far forwards that it’s more MPV than SUV. The number of territories this crossover crosses over are perhaps unsurpassed.

Finish is strong, materials feel solid even if they’re not soft, and there’s a simple digital dashboard and, perhaps obviously, a group-sourced central touchscreen. At least the temperature is permanently displayed and big enough for a simple finger jab. The dash is shaped so that you can rest your hand on it while you’re distractedly prodding the four buttons it takes to turn off the infuriating lane keep assist.

On the 80, there’s the option of paddles on the steering wheel, which increase or decrease the amount of engine braking. That’s denied to 60 buyers, which is a shame if you like driving because it gives you something to do. As it is, there’s the auto option, which thinks about junctions ahead and mostly predicts deceleration levels well, or two standard regen alternatives – quite coasty, and not quite so coasty.

Either way, there’s no one-pedal driving. It’ll creep unless you brake to a standstill. No bother. The driveline is smooth and linearly responsive either way, in a manner that quite suits a Skoda. Ditto the steering, which is accurate and moderately and consistently weighted.

Obviously, with the car being rear-wheel drive, there’s no torque steer tugging on the wheel as you put the power down, but that’s probably the only clue as to which wheels are driven. The Enyaq turns nicely enough, because although it’s heavy, the weight is centred low, but it’s an agreeable rather than exciting companion.

It rides decently, too; the 60 better than the 80, I think, with a little more compliance (although the 80 I tried wore 21in rims to the 60’s 20s, both optional) and certainly better body control. The 60 takes a ‘whump’ to settle after a crest or dip. The 80 wants a whump and a half. The 60’s the more pleasing car to drive – albeit it won’t go as far. 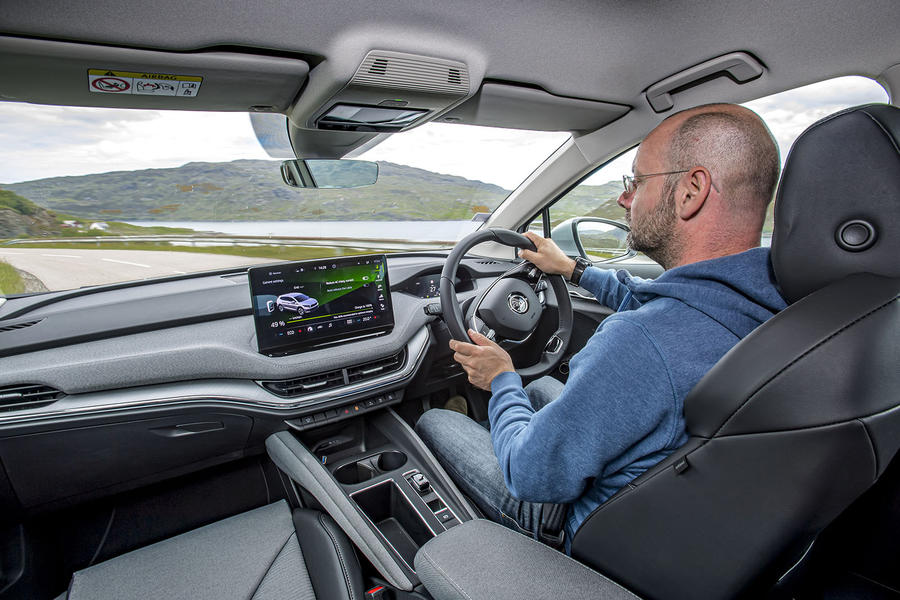 You might well. Skoda makes no-nonsense, spacious cars with real zeal, so it’s no surprise to find that, given access to a skateboard-like platform, it has created a car off the back of it with a load of interior and storage space and an airy, family-friendly feel. That it’s actually quite nice to drive is only a bonus.

Usual caveats apply: battery-electric vehicles aren’t for everyone’s duty cycles, yet. And I’d prefer it if the optional high-powered charge options were standard (100kW is an extra £440 on this 60 model), because it’ll only complicate matters when it comes to resale and the used market.

But you’re looking at an EV writ through with Skoda sensibility. If both of those things sound like they’d suit you, this is a good choice. 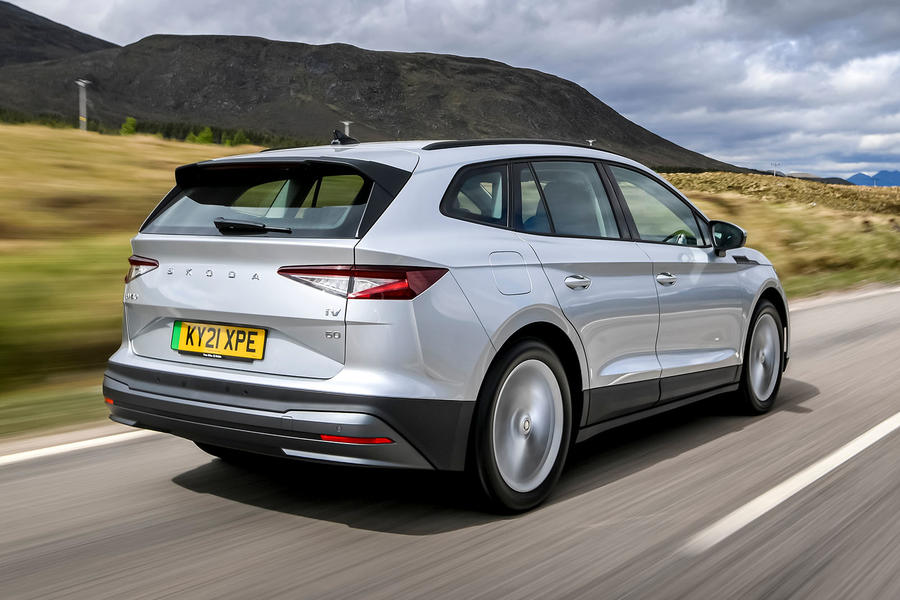 Elegant? I don't see that, it's dumpy and heavy looking, and I really don't like the fact that our roads are being filled with so many overweight family vehicles.

I think this is actually pretty good value considering how much it costs to develop new BEV platforms, even shared ones.  Comparing today's prices with those from 20 years ago (adjusted for inflation) is interesting: take the Mk2 Mondeo of 2000; at today's prices that range would start at 24k (for the base 1.8LX) and go all the way up to over 42k. Cars back than had lower equipment levels and also had to meet much lower crash and emissions standards.

The Apprentice 11 June 2021
The biggest brake on all EV's in fleet sales is the EV AFR rate of 4p a mile. Its been the same since set in 2018 despite soaring domestic energy prices.

I have done my research and with the miles per kwh of current EVs and current electricity costs its now dipped below break even so fleets drivers will end up subsidising their business mileage!
There are some special tariffs for charging EVs overnight like Octopus but the period is short and the rates unsustainable so wont be around long.
If the HMRC were told to set a more realistic rate it would substantially stimulate EV take up.