From £351,48610
Share review
The newest version of Rolls-Royce's flagship model sets new standards for opulence and luxury whether you're driving it or being driven in it
Share
Open gallery
Close

This is nothing less than the pinnacle – the very epitome – of motoring luxury, so declared this publication on the occasion of the eighth-generation Rolls-Royce Phantom’s international launch last October.

It’s not so hard to believe, is it? Rolls-Royce claims to have reduced cabin noise by as much 75% over the old Phantom, which itself was no heavy metal concert, and it has supposedly improved the driving experience, too. That’s of more significance than you might imagine, given the surprisingly high proportion of Phantom owners who actually take to the sizeable three-spoke wheel of their cars.

We’ll come onto the hardware in a moment, but first, the design, which is recognisable from the previous generation car. That wasn’t such a pretty thing, but, when it came to all-round imperiousness, it was a match for the Natural History Museum, and that hasn’t changed.

The new Phantom is perhaps a mite softer in its geometry and is notable for the tightness of its shutlines and the growth of its hand-polished 'Pantheon’ grille, which is also more smoothly integrated into the surrounding bodywork. For the record, the Spirit of Ecstasy now sits half an inch further from the road.

Having already sampled the Rolls-Royce's new flagship abroad, we’ve rather looked forward to getting the Phantom on UK roads, not least because Rolls-Royce makes some whopping claims about its ride quality. The suspension apparently makes ‘millions’ of calculations every second, reacting not only to physical inputs but also information from a windscreen-mounted camera. The eight-speed gearbox also uses satellite data to prepare for the road ahead, and there’s a layer of foam within the vast tyres to ameliorate roar.

This, we suppose, is precisely what you’d want to hear if you were spending roughly £400,000 on a car, but is it borne out on the road?

Often when we talk about cars that ‘stir the soul’ there’s an atmospheric screamer of a combustion engine spinning to the heavens involved. That or a chassis of such exquisite poise that it tickles the synapses in a way that has to be experienced to be believed. 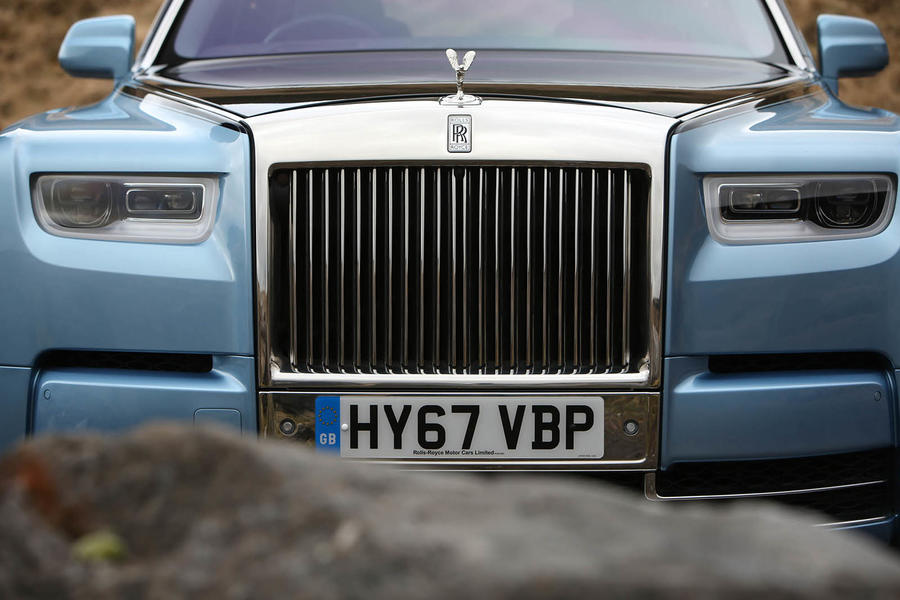 Achieving any good level of stirring with boring old refinement is a much harder task and far rarer to witness. It can be equally gratifying, however, and that’s the case here, with a twin-turbo V12 that idles low enough to have you checking for signs of life, at near 650rpm.

Once aboard, you push a button to shut off the outside world, which explains the absence of an obvious door-handle. Step-off in the eighth-generation Phantom is then so absurdly serene that it can actually make you feel giddy, like when you’re not sure whether it’s the train you’re watching or the one you're sitting in that’s beginning to glide away. Throttle response is perhaps a touch lethargic, but you’ll forgive it that.

On the move, that six-and-three-quarter engine is so impossibly distant that it may as well be connected to the car in front via an extra long propshaft. The engineering brief was probably to hide its existence altogether, and so you don’t get a tachometer, only a reading of how much power you have left in reserve.

Drive sensibly and you’ll make ample progress without ever leaving anything less than seven tenths as back-up, although mashing your foot into the inch-and-a-half-thick pile of the carpet will make 60mph come up in 5.1sec. That’s quick enough to leave our current favourite hot hatch, the Honda Civic Type R, for dead and evidence of more than 660lb ft of torque from just 1700rpm.

British roads versus all-new Phantom, then – hardly a fair fight? In general, no, not really. This car debuts a fresh, more torsionally rigid all-aluminium spaceframe platform for Rolls-Royce. From it are hung air springs with adaptive dampers and active anti-roll bars. There’s also four-wheel steering, which in this instance is less about realising the last word in agility than it is making this 5.76 metre-long car tolerably manoeuvrable on tighter roads.

You quickly realise that the broad, flat seats are a statement of intent. There’s precious little bolstering because the expectation is that you’ll never need it. Endless modes for the steering, suspension and engine are also wonderfully conspicuous by their absence, and so you settle into driving the car in the precise manner in which it would like to be driven. That is with an economy of gesture and a heart rate commensurate with the ultra-low idle of the engine.

The steering is accurate enough to place the car with confidence on smaller roads (everything short of a dual-carriageway is ‘smaller’ for this car), but it’s delightfully light and the wheel is thin-rimmed. That encourages you to plot your course with the gentle precision of fingertip efforts, guiding the car by calmly anticipating the road ahead, just like your driving instructor said to.

If there’s one thing about the new Phantom that really takes your breath away, though, it’s the sense of detachment from the world. There’s a feeling that you wouldn’t need to raise your voice inside even as vortices began to flow from the Spirit of Ecstasy. You perceive the outside world in the same way you perceive a scene in a film – from a different dimension. 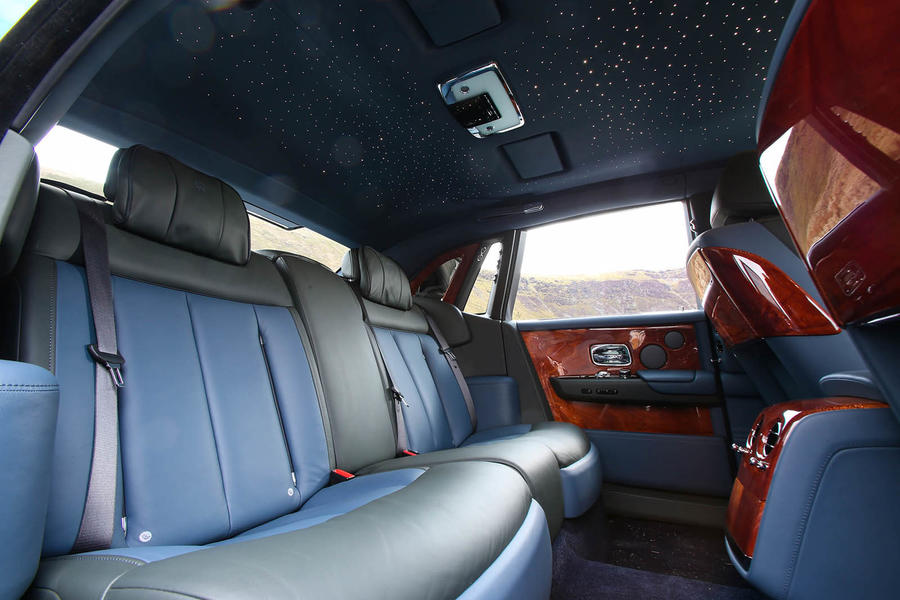 You could argue that the Mercedes-Benz S-Class has a more cultured secondary ride than the Phantom and the Bentley Mulsanne is a bit more clinical in its vertical suspension movements. There’s no doubt these cars offer greater appeal for the driver, too, and are substantially less expensive to buy.

The paradox is that even as the person at the wheel, you won’t ache to be back in those cars like you will the Phantom. Its anechoic properties are unrivalled, and with 130kg of sound-deadening materials, it possesses an ability to make motorway speeds feel pedestrian in a way that is genuinely spooky – and addictive.

Simply, if four-wheeled indulgence with an almost unlimited budget is the brief, the Phantom’s fitness for purpose is unimpeachable and unmatched. Sheer opulence aside, the ride comfort, composure and refinement engineered into this gargantuan all-new chassis are spellbinding at times.

The controls, both physical and digital, are also presented in such a way that only the ones you actually require are at hand at that moment, and nothing more to needlessly complicate matters. In a world of cars that seek to do everything for us, this is an uncommon and tremendously welcome trait. Factor in a fabulous array of materials and the Phantom is old-school but not old-fashioned, for which you’ll love it.

There’s rather lot more to Phantom VIII than we can say here, and so a full road test beckons. Rest assured that with one or two minor caveats, on which we’ll duly elaborate, it hits new heights for luxury at a time when that quality is being delivered more convincingly than ever. 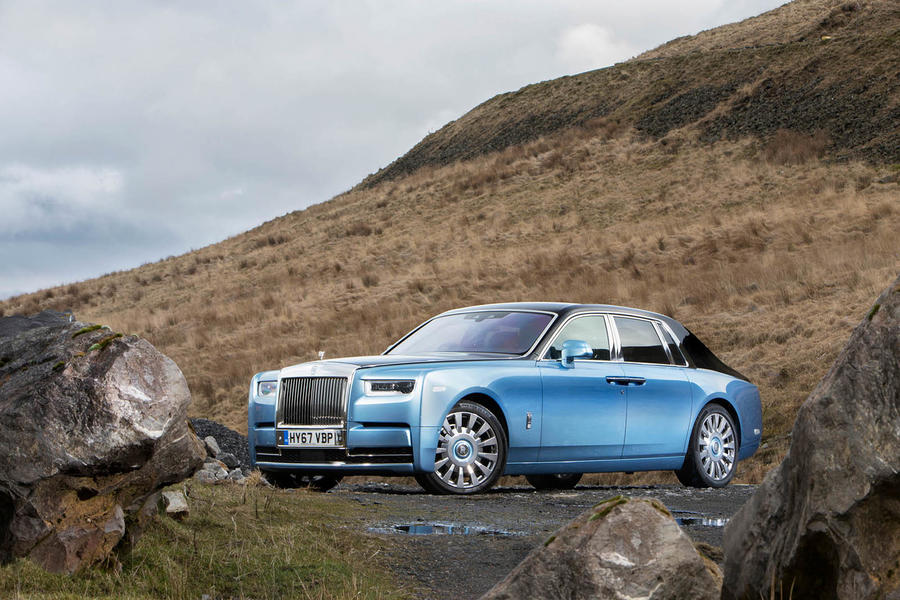 Yes, they do look very similar but kind of echo the generic Lucas tail lights that adorned lots of British cars back in the day. The most jarring element to my eyes is the modish strip of perforated metal weaving its way across the dashboard. It looks like a cheap Bluetooth speaker has been left on an antique buffet. The matt texture does not still well with the abundance of polished chrome elsewhere. The infotaintment screen looks like it’s been lifted from a 3-series and is very poorly integrated in the overall design.  The B-roads are not apparently tagged on the satnav presumably because the Phantom is too big for them.

Neither Rolls nor Bently have

Neither Rolls nor Bently have come close to capturing that svelte voluptious rear; somehow there's an odd disconnect between what appears to be an attempt to taper off and all those horrid straight lines and ironically some appaling shut lines as well.

Interesting that on this vehicle they seem to have borrowed the rear light clusters of a FIAT 500!

And all that timber on the dash ...  how awkward.  Like my granny's sidebaord!