From £15,7357
Plug-in hybrid crossover is attractive and unique on first glance, but can it trade on looks and statistics alone?
Open gallery
Close

The new plug-in version of the second-generation Renault Renault Captur has arrived in UK dealerships, giving us our first opportunity to try it with the steering wheel on the right-hand side.

The Renault is an interesting car in its own right, of course, for reasons we’ll come to later, but doubly remarkable for the fact that it’s entering a relatively uncontested segment: that of the plug-in hybrid compact crossover. Size-wise, the Captur takes on everything from the Ford Puma to the Peugeot 2008 and Nissan Juke, but similarly electrified alternatives are limited, essentially, to just the Kia Niro PHEV and Mini Countryman S E All4.

No doubt this niche-busting trio won’t have it so easy for long, given that there’s a new entry to the crossover class every 27 minutes, and that plug-in hybrids continue to play a crucial role in manufacturers’ battle to comply with stringent fleet emissions targets. But for now, the Captur seems on first glance a real no-brainer for urban-dwelling business buyers and eco-conscious families who need a car that’s at once more practical than a supermini but no harder to park. Whether it deserves that custom on the basis of anything but uniqueness alone is what we’ll seek to determine.

The powertrain comprises a 1.6-litre naturally aspirated petrol four-cylinder - unavailable as a means of propelling the non-electrified car - with a 66bhp electric motor for a combined output of 158bhp and a 0-62mph time of 10.1sec. We’ve tested it in S Edition trim, which is marked out from lower trims by its 17in diamond-cut alloy wheels, colour-coded mirrors and tinted rear windows. 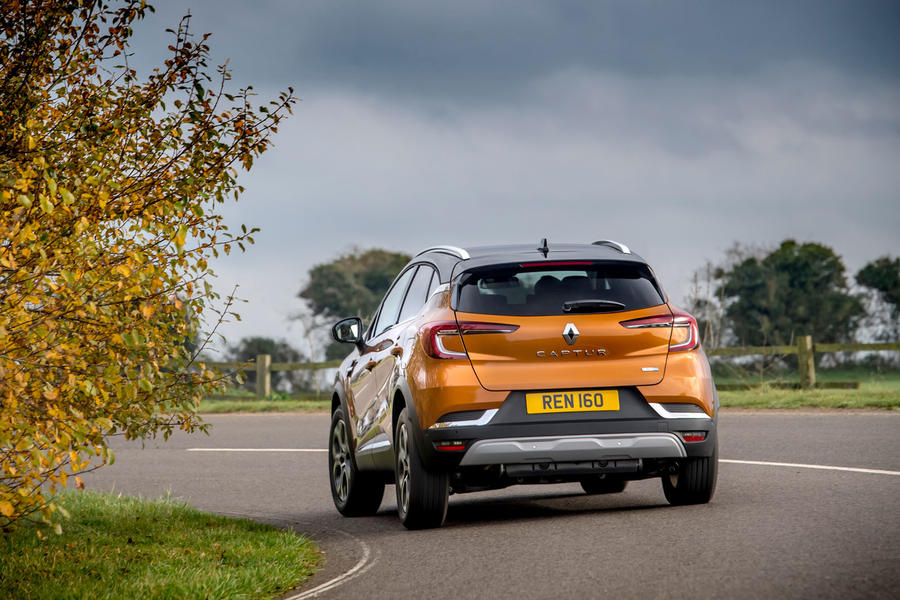 Underpinnings aside, the second-generation Captur immediately cuts a rather more dashing figure than its comparatively staid forebear. Slimmer lights at both ends and more overtly muscular body lines bring it into line with its chic Renault Clio and Renaut Mégane stablemates, and there’s little of the gratuitous stylistic quirkiness that afflicts some of its rivals - or indeed, siblings (we’re looking at you, Nissan Juke). Nor is there much to tell this electrified version apart from the standard petrol car beyond a subtle badge here and there.

Automatic versions such as this get a trick new ‘floating’ centre console with a wireless phone charger underneath, and orange soft-touch trim panels (a £350 option) imbue the cabin with a real sense of quality, both perceived and actual. We would bravely suggest the large vertically aligned infotainment touchscreen felt Tesla-esque, but the retention of most of the physical controls means the cabin feels slightly more cluttered than it ought to, while the counter-intuitive control placement (the volume adjuster is hidden behind the steering wheel, and the drive mode selector next to the heated seat switch) will take some getting used to. Overall, though, it’s bright and airy and certainly brings more visual pizzazz than does a Ford Puma.

The E-Tech has three confusingly named driving modes: Pure, Sport and My Sense, which you’ll know better as ‘Electric’, ‘Combustion’ and ‘Hybrid’. In the last of these, the transition between the two power sources is all but seamless, and at low revs, the petrol motor is barely more discernible than its electric team-mate. It starts to make a bit of a din when you get a hustle on, though, and remains in a low gear for some time after kickdown, making overtakes and motorway merges a noisy experience. However, it belies its unforced induction with decent mid-range grunt and sufficient shove off the line.

On mixed roads, and with judicious use of the (non-variable) regenerative brakes, it’s possible to top up the traction battery quite quickly, making last-mile EV running a realistic daily proposition, should your commute take you into high-traffic areas. That’s an especially attractive proposition, given the competence of the electric element of this powertrain: pleasingly swift take-up accompanied by a faint background whirring means this doesn’t feel like a functionality that’s been baked in for the sake of compliance, more a welcome injection of future-proofing that will suit - and enhance the ownership experience for - a much wider target market. The silence of the EV motor is a bit of a double-edged sword, though, because tyre roar, wind noise and suspension clunks soon fill the silence. Not unbearably so, but enough to blemish a package that’s otherwise up there with the most refined of them.

With its 7.5kWh battery mounted under the rear seat, the Captur is claimed to be capable of 30 miles of EV running, and our test suggests that’s a realistic projection. As with all PHEVs, the combined WLTP consumption figures are less easy to replicate in real life - the Captur’s is claimed at an astounding 188.3mpg - but it’s hardly a thirsty old beast, in any case. Once you’ve worked out how to treat the powertrain to maintain the optimal combination of petrol and electricity, you’ll likely find it an agreeable everyday companion, if not one that’s particularly engaging.

In terms of outright dynamic verve - a characteristic that the vast majority of its buyers are unlikely to interrogate - the Captur can’t shade its conventionally fuelled counterparts. Where the Ford Puma brings poise and exploitability on a par with the lower-riding Fiesta, and the diminutive Seat Arona coasts over imperfections with almost unparalleled serenity, the Captur fails to hide the weight penalty brought about by electrification. Speed bumps are met with a harsh jolt if tackled at anything approaching the posted speed limit, and Britain’s notoriously crumbling Tarmac sends an almost persistent judder up through the steering column and through the seat bases. Rougher stretches of road verge on downright uncomfortable.

Then there’s cornering performance, which - again, with the caveat that the vast majority of Capturs don’t end up in the hands of keen drivers - will hardly inspire the occasional Sunday blast. Body roll in sharper bends is fairly pronounced, which we’d be inclined to forgive had it translated into a pillowy soft ride over coarse ground, but as it is, the Captur demonstrates a paradoxical blend of what I’m going to term 'wallowy crashiness' for want of a better phrase. It’s a case of learning its quirks and adapting to them. Neither the Captur’s straight-line performance nor its dynamic character is sufficiently poor to warrant overlooking the entire car, but its Mini and Kia rivals offer a better-rounded driving experience, if one that’s more unremarkable than impressive. 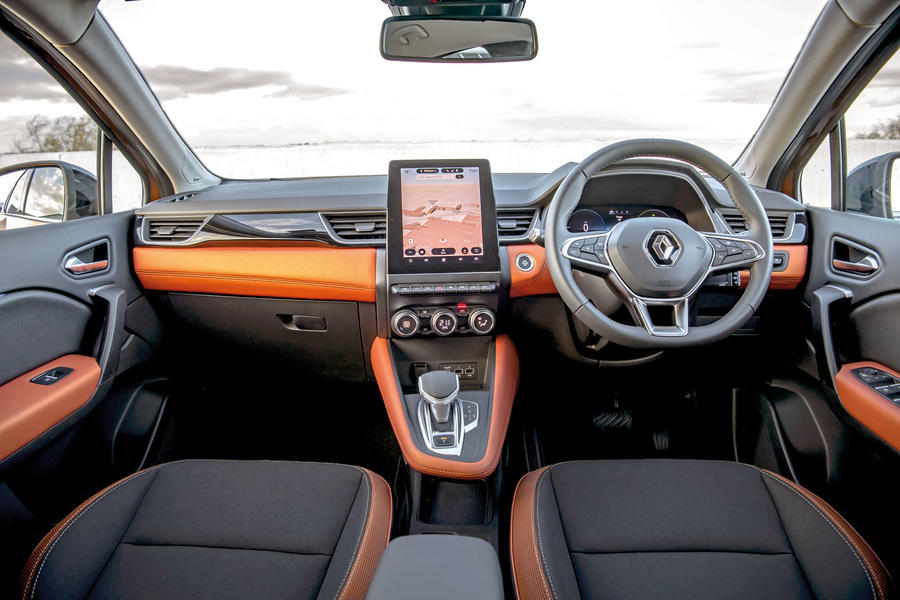 Assuming your requirements are specific enough to genuinely narrow prospective purchases down to the Kia , the Mini and the Renault, chances are your heart would be taken by the Captur, even if your head reckons the Niro’s 36-mile EV range or the Countryman's polished dynamics make them the smarter buy.

For what it’s worth, the Captur is a refreshingly tasteful take on an increasingly ubiquitous bodystyle, and one that pairs its comfortable, well-appointed interior with cheap running costs and ease of use. Just don’t expect it to deviate wildly from this formula in offering flashes of driver engagement or segment-leading rolling refinement. 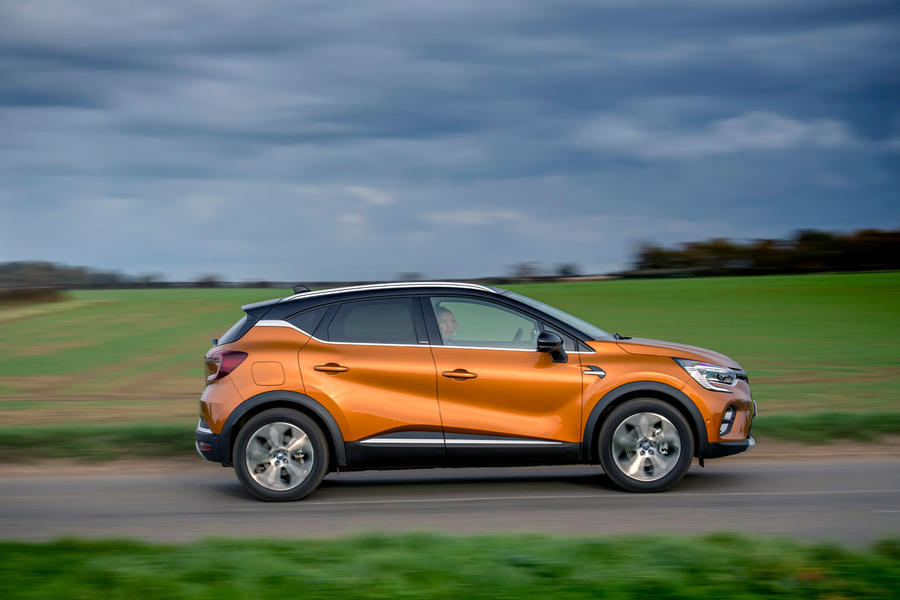 What is it with motoring journalists?

The cabin doesn't appear remotely cluttered to me, the retention of some physical controls should be welcomed. Its a car, for gods sake, something to be driven easily and safely, not your latest top end electrical gadget.

33k, 160hp and it still takes over 10 seconds to get to 60, crazy numbers and a crazy purchase for the private buyer and hopefully in a few years the tax dodger too.  33k,  who said BEVs were too expensive, this phev is more than a leaf

It seems these days many reviewers go for style (subjective) over substance (objective ability). Another case in point is the new Honda e, whose supposed 'cuteness' has blinded many reviewers to its shortcomings such as its limited range.