From £14,2458
A more sophisticated Captur. Refinement is decisively better, as is interior quality and equipment
Open gallery
Close

This is the follow-up to Europe’s best-selling B-SUV – that’s small crossover to you and me. It’s all-new, from roof to tyres, and shortly to be offered with an especially ingenious plug-in hybrid option. Mainstream engines include three- and four-cylinder petrols and diesels ranging from 94 to 153bhp. A seven-speed auto is optional.

This new Captur rides on a new platform, and within its shapely new bodyshell is an interior that Renault claims to be “revolutionary”. The new Captur is a little bigger (the greatest growth benefiting rear leg room), while its CMF-B platform is considerably stiffer and has been engineered to provide a wide range of driver assistance systems as standard, with scope to increase the car’s autonomy in later life.

The essential Captur formula remains unchanged, however – a sensible decision given that sales of the outgoing model have risen every year, despite its age, and the fact that there are now more than 20 competitors. When the original was launched in 2013, its only rival was the Nissan Juke.

It’s inside that the biggest changes are to be found, although you’d hardly call them revolutionary. The two standout features, literally, are the optional high-mounted 9.3in portrait infotainment screen and, beneath it, a pleasingly shaped peninsula providing a platform for the gearlever, be it manual or auto. Forward of this is a phone-charging mat, and beneath this another storage tray. Left-hand-drive Capturs have a roomy pop-out drawer where you’d usually find the glovebox lid, which is what right-hookers will get because the conversion can’t be effected.

‘Life on board’ (an obsolete Renault strapline, you may recall) is further enhanced by a generous splurge of soft-feel materials that substantially improve the interior’s ambience. If you like your cabins colourful, you can order an orange interior pack providing slightly metallic-looking, soft-feel inserts and other sun-hued trimmings that give it a considerable lift. Frustratingly, however, it’s available only on the range-topping S-Edition.

The powertrain most likely to propel this freshly confected Captur here will be the 100 TCe, its 1.0 99bhp triple paired with five-speeds. The test model closest to it was the four-cylinder, six-speed 128bhp 130 TCe finished in a trim equivalent to the mid-level Iconic – Play and S-Edition are the lower and upper levels – riding on 18in wheels.

These are suspended by MacPherson struts up front and a twist-beam axle at the rear. The electric power steering is an enabler for a suite of assistances including lane-keeping, which corrects a drift beyond a white line, and lane-centring, which keeps the Captur plumb in the middle. These are standard, together with autonomous emergency braking and traffic sign recognition. Optional on the TCe 130 and 155 automatics is a so-called Highway and Traffic Jam Companion that controls the car’s speed relative to the vehicle in front, besides automatically advancing you in jams.

A 360deg parking camera and assisted parking are also optional and, more vitally, all Capturs are Apple CarPlay and Android compatible. 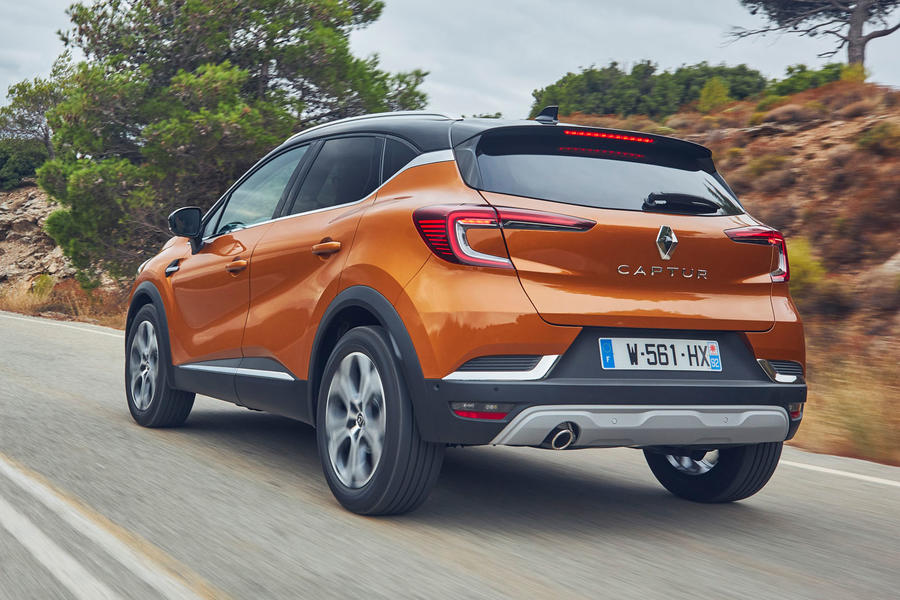 More civilised, in short. On the move, this Captur immediately feels more structurally robust, better insulated, more cushioned, quieter and decisively better finished. It also feels more modern, especially if the portrait touchscreen is fitted – its location just right for easy viewing. For the most part, it’s pretty easy to use, too, as is the high-mounted gearlever.

Like all B-SUVs the Captur is some distance from being a machine to please the keen driver, but its steering weight is reasonably judged, it corners neatly enough and rolls little. In fact, it would be worth trading a little body roll for some pliancy over sharper peaks and troughs – the suspension’s calm absorbency across less testing terrain is occasionally disturbed by some unseemly crash through. The test car rolled on 18in rims, however; the TCe 100 will get 17in rims and tyres of more pliant profile.

The cabin’s extra width, a mildly high-rise driving position, comfortable front seats and the new-found civility make journeying fairly painless, especially compared with the previous 100 TCe. The four’s slightly guttural delivery under load intrudes little and it revs smoothly. The touch of high-rev strain in the first example sampled was less evident in a second. Both of these 128bhp machines were brisk, if not quick – the TCe 100 it’s easy to imagine wanting for power when its rear seats are occupied. These back-benchers will enjoy more room, and their portion of the cabin is now less obviously cheap, too. The asymmetrically split rear seat slides, and the boot behind it is the biggest in the class.

So it’s a practical family wagon, and potentially a colourful one what with the optional orange highlights and the two-tone paint that’s become a Captur trademark. 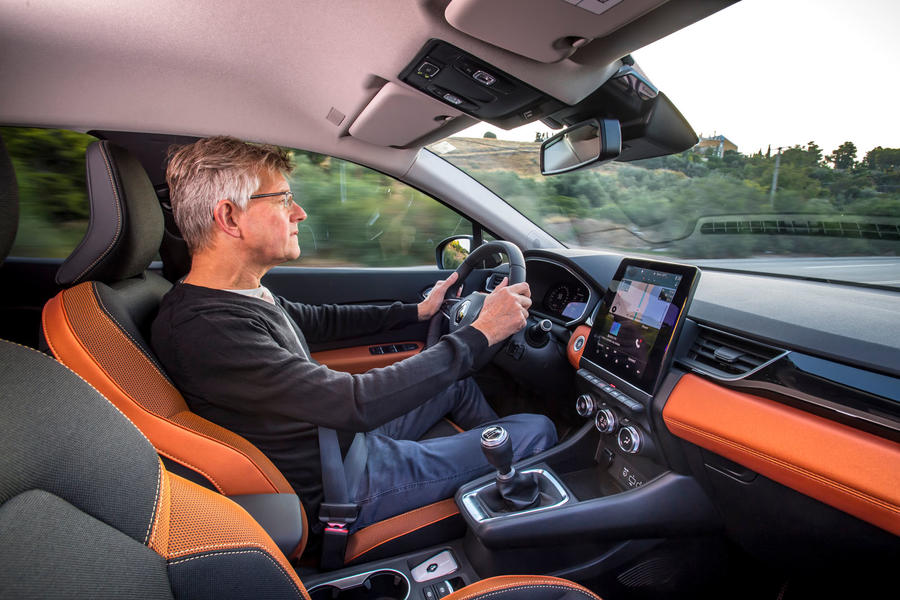 As yet, there is no B-SUV that you’d label a positively enjoyable drive, and this Captur doesn’t change that. But it’s polished enough to be a challenge to the Volkswagen T-Cross that is the best of them, and it comes with an interior that’s more interesting and more convenient. The option of traffic jam assistance, enabled via radar-governed cruise control, and lane centring – both firsts in the segment – are appealing aids for the real world of congested roads.

Above all, given the existing Captur’s still growing popularity, the fact that this version is comprehensively better than the last, while building on the design allure of the original, makes it well worth a fresh look. And the innovative plug-in hybrid should be worth the wait, too. 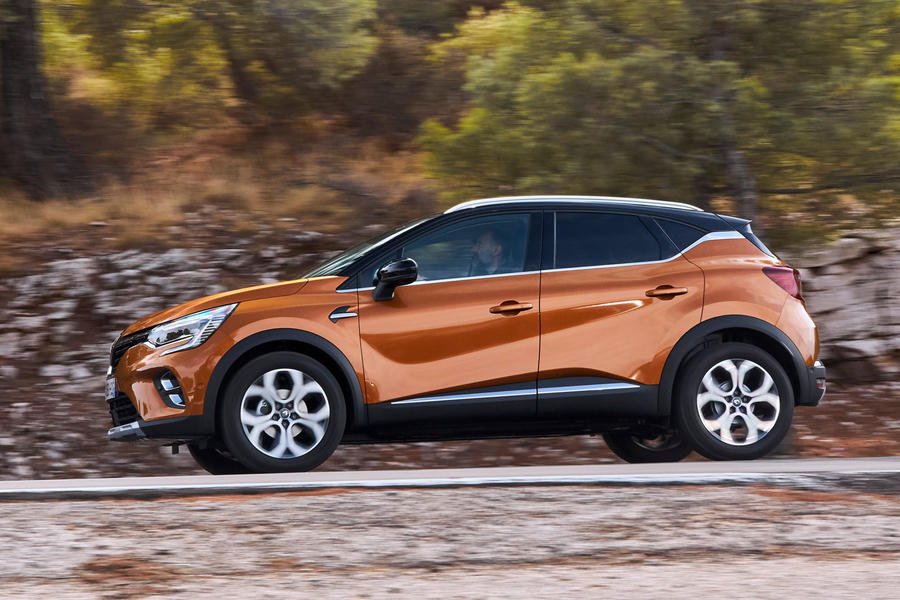 Give us the Kwid

Elsewhere on this website, Autocar tells us the Renault Kwid, much the same as the captur, but less fussy, is available in other parts of the world for £3,400. We're being ripped off. This thing isn't worth 14 grand and they're taking us for fools.

"Cwid much the same as Kaptur"??

A flimsy, low-cost low-NCAP runabout for emerging nations as an alternative to the TukTuk versus a mighty 5,5 star rated class leading premium cross-over aimed at smart-thinking Europeans?

Brilliant cross-over, don't you think? Likely to remain the leader in its segment. And what contrast with some dull looking VW Group competitors.

I know to many the raft of

I know to many the raft of compact SUVs are something akin to the Devil's work, but as they mature into new generations they do get better. It's easier to style the smaller ones and retain the hatchback on stilts look than something like the new Discovery which is trying to mix ruggedness with premium curves and it has received very mixed reviews because of it.

Renault have done well here, especially on the interior with the splash of colour elevating it.

Renault have done well here, especially on the interior with the splash of colour elevating it.

Renault seem to be back on a role especially in the styling department.  It no longer leads as it did with the Espace and Scenic but all of its face-lifts have been great improvements on what was pretty good in the first place.  I agree that this interior looks particularly inviting.  Any dreaded hard plastic in evidence? - who cares?  Appearance and ergonomics are far more important than the softness of a few distant surfaces that hardly ever get touched!