This is our second encounter with the recently updated version of Porsche’s formidable Macan GTS – but the first in the UK.

Our initial drive of this sharper, more focused take on Stuttgart’s golden-goose SUV came all the way back in February at the car’s international launch. And on smooth, technical Portuguese roads, it reminded us why the Gran Turismo Sport model has been the Macan of choice for keener drivers who happen to have families in tow. Now it’s landed here in the UK and it’s time to find out just how effective it is on bruised and battered British Tarmac.

But first, a quick recap on what makes a GTS a GTS. The recipe remains pretty similar to last time: introduce a slightly more focused chassis tune; add in a dash of extra visual flair; and give power and torque a modest hike.

So you still get a range of tasty visual tweaks that include darkened light housings, black 20in RS Spyder Design alloy wheels and some glossy black exterior trim pieces - all of which leave the Macan GTS looking suitably meaner than the standard car. The car sits 15mm closer to the ground, too, on a sportier suspension set-up that includes recalibrated adaptive dampers for enhanced levels of response and control. Optional height-adjustable air suspension drops it by 10mm in Comfort setting, but in Sport Plus mode takes it lower even than the coil-sprung Macan GTS. Our test car had it, at a cost of £1044.

The most significant tweak, however, relates to how the GTS gets its smattering of additional straight-line punch. Whereas the last car got a gruntier version of the 3.0-litre twin-turbocharged V6 from the Macan S, this one uses the 2.9-litre motor from the flagship Turbo. So that it doesn’t step on the range-topper’s toes, power and torque are capped at 376bhp and 384lb ft, as opposed to the 434bhp and 403lb ft of the Turbo. Even so, that’s still 20bhp and 16lb ft more than you got in the last Macan GTS. 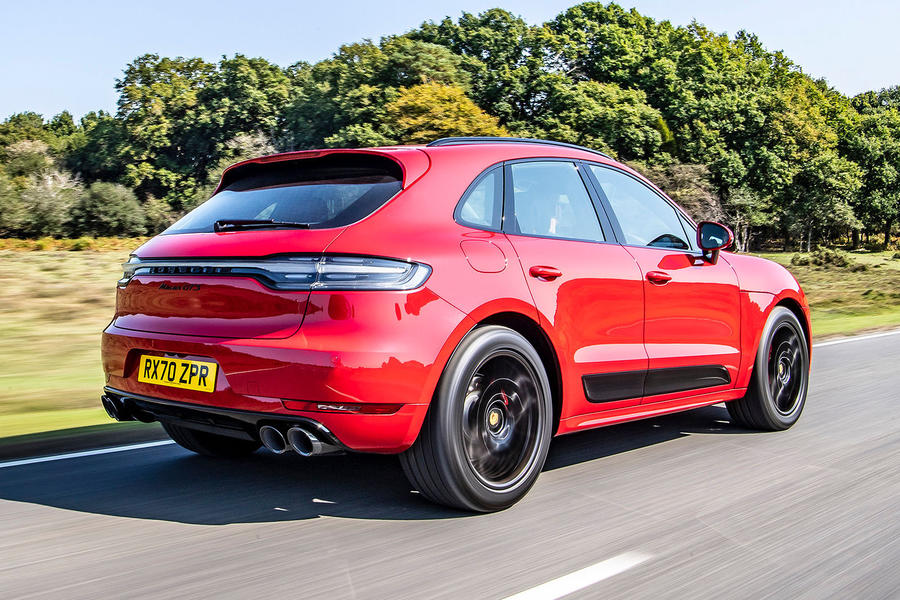 Just as quick as you’d ever need it to be, that’s for sure. It may not be the most powerful Macan out there, but it’s unlikely you’ll really notice out on the road.

Our Sport Chrono Package-equipped car felt every bit as quick as its claimed 4.7sec 0-62mph suggests it should, with its V6 delivering heroic acceleration right through the rev range. Its aggressive and pleasingly feral-sounding snarl is accentuated very nicely by its standard-fit sports exhaust, while the hot-vee positioning of its turbochargers and sharpened seven-speed PDK gearbox deliver swift throttle response and quick-fire shifts.

So it’s very easy to find yourself travelling really very quickly. And thanks to those suspension tweaks, the fitment of Porsche’s clever torque-vectoring PTV Plus differential, an accurate, communicative steering rack and rear-biased all-wheel traction, maintaining that pace through corners isn’t a task that’ll faze the Macan GTS too greatly, either.

Faster bends will result in a bit of body roll, even in Sport Plus mode, but such movements arrive in an exceptionally controlled fashion. Grip levels are very high, and the steering gives you a reassuringly clear idea of how the outside tyres are loading up and responding to the surface under wheel. It doesn’t feel quite as energetic or immediate in its responses as, say, an Alfa Romeo Stelvio Quadrifoglio, but neither is it uninvolving or dull in the way it reacts to you getting your foot down. In fact, the sense of sure-footedness that underwrites its impressive dynamism only heightens its appeal as an everyday performance SUV.

So, too, does its ride quality. There’s a firmness, but it never feels agitated or as though it’s about to run away from itself on harsher surfaces. In fact, the manner in which you can sense its suspension working to keep its wheels in contact with the road and its body level as you nail it down an undulating stretch of B-road is pretty incredible. As is the fact that it won’t make you wince as you hit a rut or bump, even when everything is dialled up into Sport Plus mode.

Then when you decide you want to chill out and take it easy, it turns back into a liveable and well-mannered family SUV. There is a small amount of fidgeting that’s detectable out on the motorway, and you’ll hear its air suspension working away over bumps at low speed, but in no way is it uncomfortable. Tyre roar and wind noise aren’t much of an issue, either. 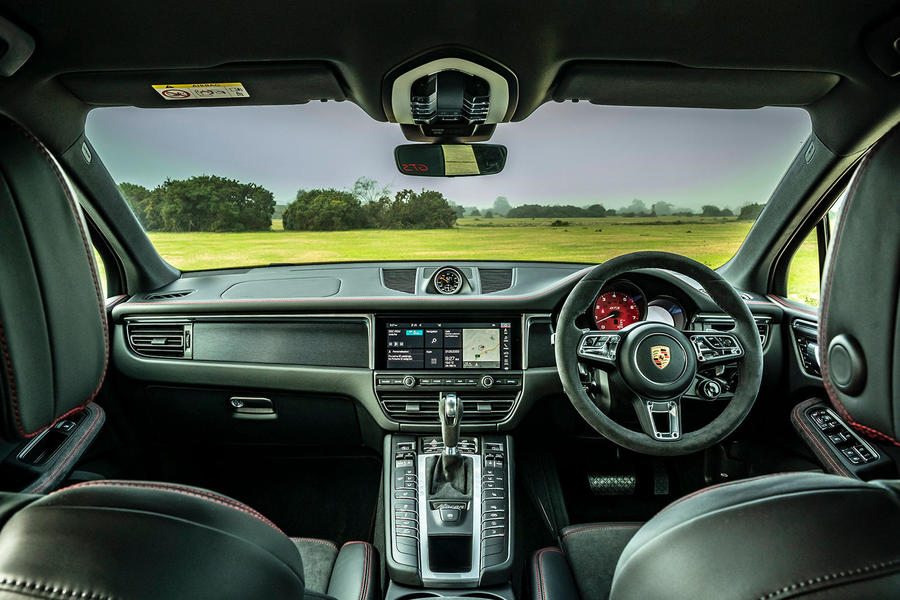 At £58,816, it’s not exactly cheap, and being a Porsche, the options list is both extensive and expensive. PTV Plus, air suspension and the Sport Chrono Package are all things you’ll likely want, and you’ll have to pay an additional £2900 to get ’em. Spec a few more options such as adaptive cruise control and an extended leather and Alcantara interior, and you could easily add another £10,000 to that figure. Funnily enough, that’s about how much you’d need to upgrade to the range-topping Turbo.

But even if you take issue with the price, or with the performance SUV as a concept, it’s hard not to be impressed with the Macan GTS.

It’s comfortable when you want it to be, there’s plenty of space inside, the driving position is typically spot on, and the boot is very generously sized. You could quite happily drive it every day, all the while being quietly smug about the fact that you could use it to take apart a challenging stretch of road at the drop of a hat, and have quite a lot of fun in the process.

That’s by no means a bad sales pitch. 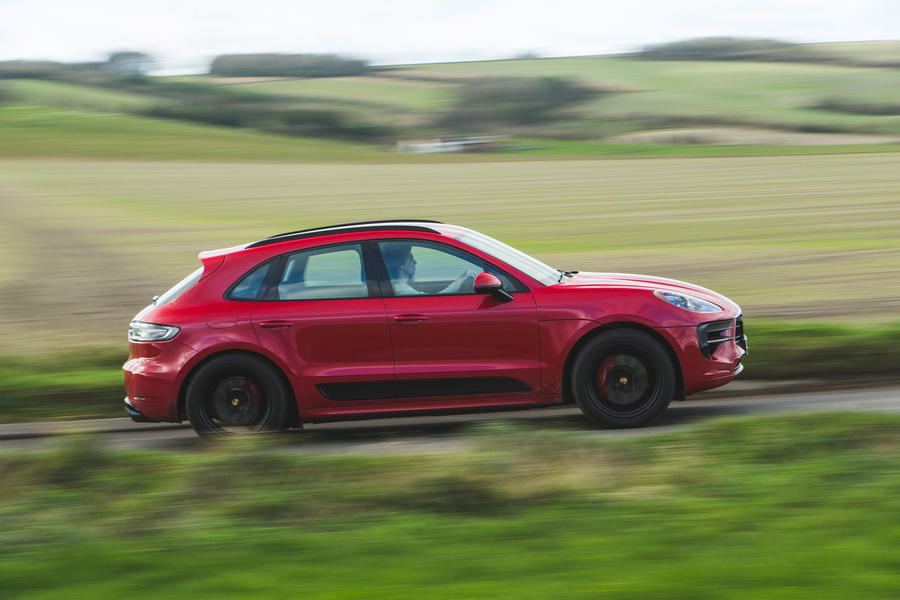 Perfomance SUV's are a nonsense in my view.

Well, if you want to make a good performance car you don't start with a high centre of gravity, heavy big body or a big frontal area.

However, if I did want one I would rather have one made by Porsche than almost anyone else.

Not my cup of tea but with when a toyota rav4 phev retails for 48k, 58k for a porsche V6 sounds pretty good value for money.

I was sorely tempted 5k options gives you a good car albeit without leather interior options so call it £65k with tax. 3 month or so lead time. I just decided that a nearly new Stelvio QF was a bit more exciting. 376ps is enough and Porsche make the most of it but the Alfa seemed better looking and more thrilling. Just for information and not my thing but apparently this engine can easily be re-mapped to Turbo numbers ....