Anyone who has seen that photo of Alfa Romeo’s 164 Procar – the famous one in profile, front and rear bodywork removed – already understands this new Ruf. Only once the skin was detached from Alfa’s V10 silhouette racer of 1988 was it obvious that the thing had virtually nothing in common with the 164 family saloon, and it’s a similar story with the Ruf SCR.

Despite the aesthetic, it shares little with an old Porsche 911. How little? For one thing, it’s constructed, McLaren-style, around an 88kg composite tub of Ruf’s own making. For another, the suspension is by double wishbones with pushrod actuation. There has been only one official 911 with both those elements and that’s the 911 GT1 with which Porsche won at Le Mans in 1988.

The Ruf’s deceptively small and low-slung body, including its X-rated hips and dinky ducktail spoiler, is also full carbonfibre, which is something no Zuffenhausen 911 has ever had.

So while it looks like a 911, albeit one more imaginatively conceived than most cars in Ruf’s long back catalogue, the SCR is categorically no such thing. What it is instead is Alois Ruf Jr’s vision of what the ultimate rear-engined performance car might look like. Made in Pfaffenhausen, of course, and now on sale for £770,000.

This is an expensive car, but the depth of development engineering is quite something. Plus, with Singer’s 964-based creations routinely selling for seven figures, you could argue the SCR’s asking price simply reflects reality in this part of the market.

Much of the work has focused on the SCR’s crown jewel, and the 8700rpm flat six is where this car gets closest to true Porscheness. In its tail sits an engine whose block is cast in-house but is based on the 3.6-litre Mezger-designed unit from the 997 GT3. After trial and improvement,it was felt the best combination of firepower, character and cost-effectiveness was achieved with exactly four litres of swept volume. Go much beyond that and Ruf claims the engine would need monstrously aggressive camshafts and a race ECU to make the extra displacement count. All that would also add to the costs, never mind the implications for day-to-day usability.

Sitting atop the 4.0-litre block, the cylinder heads for this hugely oversquare engine are Ruf-specific, just like the titanium rods and forged pistons, although the crankshaft is the same racing crank found in the old 997 RSR. Altogether, the engine is good for 503bhp, which in 2022 doesn’t seem all that much (the BMW M3 Competition has just as much, for goodness sake), but two things need stressing. First, the SCR is naturally aspirated, and 503bhp is just about what anybody anywhere can today reliably claw from six horizontally opposed cylinders without resorting to forced induction (the SCR’s twin-turbo sister, the tribute-to-the-Yellowbird CTR Anniversary, makes 700bhp with relative ease). Second, even with fluids, the car weighs just 1250kg. On power-to-weight ratio, it therefore wipes the floor with not only the M3 Competition but also the most recent 911 GT3 RS.

Downstream of the engine, then, sits a six-speed manual gearbox, custom-built for Ruf by ZF. It feeds torque to a mechanical limited-slip differential and 305-section Goodyear Eagle F1 Supersport R rear tyres wrapped around centre-lock 19in wheels. The wheels are simple forged items, and unsprung mass is further reduced by carbon-ceramic brake discs. 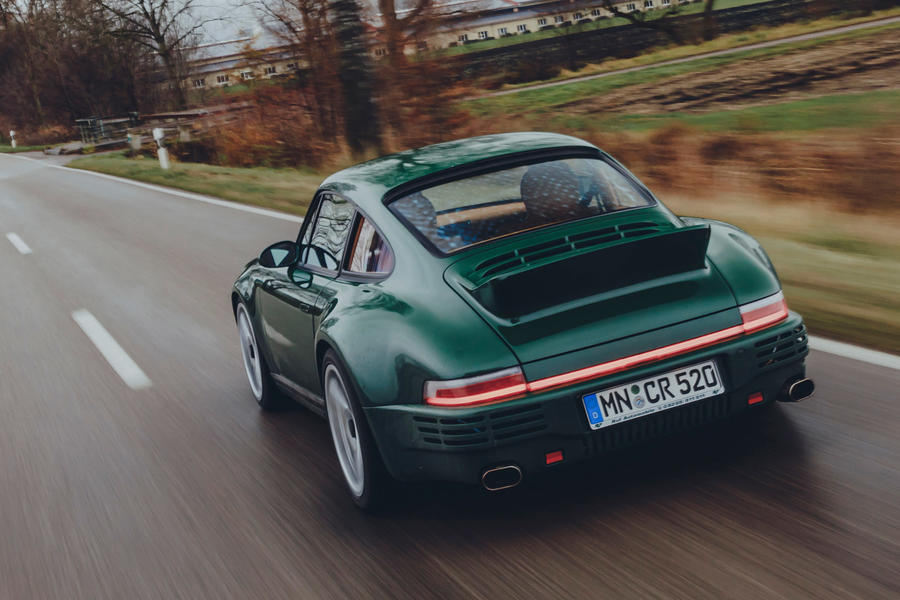 Our first taste of the SCR comes on Bavarian roads slick with dew and peppered with the muddy trails of farm machinery. However, Ruf insists this is a car that you really can drive daily, so we should in theory be fine. And as it happens, the SCR is much easier to get along with than you might expect. The flat six fires with a pulsating gruffness that’s somewhere between shouty and deafening, but it quickly settles down and pulling away is drama-free, despite the single-mass flywheel.

Helping matters is the fact that the glasshouse is exactly to 993-generation 911 proportions, so the cabin is compact but airy and it’s just you, the steering wheel and the view over the fantastically straightforward dials and our test car’s cognac leather dashboard.

The driving position isn’t as natural as that of the new 911 GT3, admittedly. It’s more old-school and upright, but at Stefan Roser’s behest, a new wheel with a longer boss is in the works, and that ought to make the geometry between rim, bucket seat and titanium pedals more intuitive.

The cabin is otherwise typical Ruf. There are idiosyncratic details but plenty of respect for the original 911 concept, with very high levels of craftsmanship. That includes the full roll-cage, which is integrated into the structure and secreted away behind the leather interior trim.

Get going and the painlessness of the package is revelatory. Throttle sensitivity is acute but no longer hair-trigger feisty, as it was on the prototype we drove a few years ago. Ruf’s engine feels predatory and lean, but crank speeds build smoothly.

The electrohydraulic steering is stunningly light and delicate but, with lower gearing than in modern Porsche GT fare, doesn’t feel nervous. Despite this, it’s still fleet enough to load up the rear axle quickly on the way into corners, which the car slices through with complete conviction.In the damp, it’s difficult to say just how communicative this rack is, but I don’t feel nervous allowing the SCR to run right up to the kerbside on the exits of some quicker bends. As for traction, upshifts anywhere near the redline will happily unstick the Goodyears, at which point the SCR’s rudimentary traction control trims the ignition (there’s no ESC, by the way). However, with so little weight to tug the car off its line, mid-corner grip is immense, even today.Keeping the dampers in the softest of their five settings helps. The body stays on an exceptionally short leash, but there’s enough sophistication in the movements for GT suppleness, as the car calmly and precisely feels out the road, finding plenty of purchase.

The benefits of it being a flyweight are omnipresent: steering and roll-on acceleration, damping, grip, comfort, the essence of the car. Despite it being rear-engined, there’s a distinctly McLaren-like fluidity to the SCR.

But unlike any McLaren since the F1, it also has an engine to die for. Pick-up is rapier-sharp anywhere in the rev range, but start low and there are three stages to the redline. Things start bassy, burbly, a bit cammy. Below about 4000rpm, this engine has manners but is what it is: a hand- built, high-performance atmo unit that’s a little impatient to get going. Oblige it and beyond 4000rpm you’re treated to cascading intake roar, courtesy of the carbonfibre airbox. Not only does this sound glorious but it also wakes you up for the granite-hard rasp the engine adopts as it races past 7000rpm, whereafter it comes on cam to utterly electrifying effect for the final, rabid stretch.

It’s a proper screamer, this Ruf engine – one of the best you’re ever likely to hear. No wonder several people with one of just 50 rare CTR Anniversary build slots have changed their order to the non-limited but also non-turbo SCR instead. I think I’d do the same. 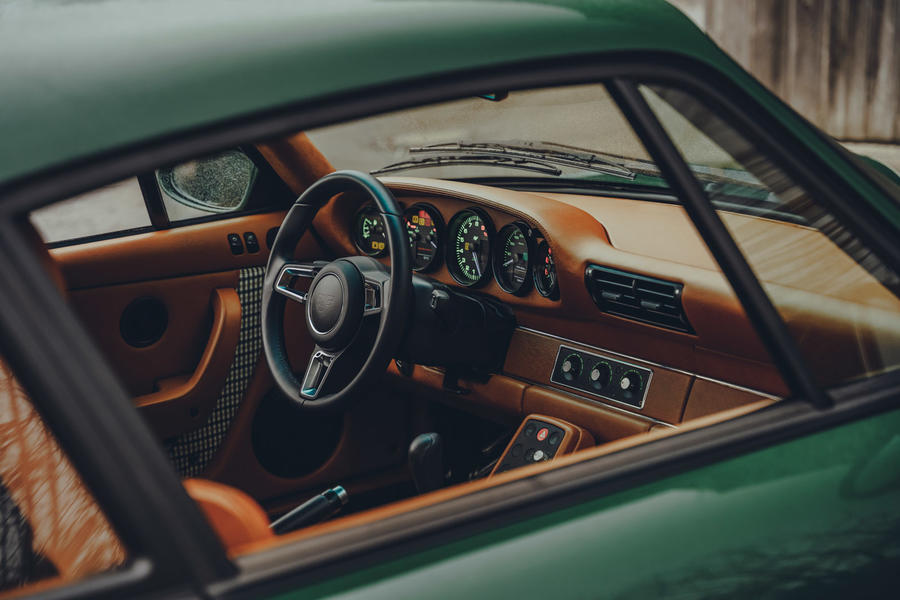 What I’d really love to do is let the SCR rip on track, to properly explore the handling. Ruf is a car company that knows what it’s doing, and this SCR strikes a fabulous balance of raw engagement and confidence- inspiring composure on the road. But the polish and huge stiffness of the chassis, plus the linearity and spirit of the 4.0-litre six, mean it’s patently capable of more.

Maybe, one day, we will get to discover how much more. Log in or register to post comments
MarkII 4 January 2022
Love Ruf (and Singer's) creations and have done for a long time but whilst the depth of their re-engineering is jaw dropping, it has to be said that a Kaege Retro would offer much of the physical, visual and aural appeal of a well engineered 911 Restomod, for a LOT less!
ElonMustard 3 January 2022