From £139,000
Share review
Part petrol and lots of electric, the Polestar 1 is a luxury coupe that's bewilderingly complicated and lots of fun
Share
Open gallery
Close

Do you worry that electrification will make all cars the same? Then the Polestar 1 is a reassuring thing: a 600bhp plug-in hybrid with a 2.0-litre supercharged, turbocharged petrol engine with starter/generator, two other electric motors, a part-steel part-carbonfibre monocoque, a carbonfibre bonnet the size of a modest mainsail, and a single transverse rear leaf spring. To top it all, it’s a £139,000 luxury coupé.

It’s a coupé so luxurious, in fact, that, um, you have to open the bonnet and delve behind the rear wheels, having jacked up the car, or perhaps while lying on the floor, to tweak its 22-stage adjustable Ohlins dampers.

Welcome to the intensely baffling Polestar 1. There was a time when the BMW i8 was the most interesting car on sale. Now, it might be this.

How we got here is an interesting story on its own. Polestar was originally an independent racer, then tuner, of Volvos. Later bought by Volvo, as is the way of these things, it became the badge applied to fast Volvo models but has now become a stand-alone electric performance brand, run half by Volvo and half by Geely, the Chinese conglomerate that in turn owns all of Volvo. Bit weird. Apparently, this subtle structural distinction matters because it means Polestar gets its own R&D spend rather than draining Volvo’s underlying profit, so it can do things like open a satellite engineering centre in Coventry.

It also means, perhaps, that its engineers can go to the bosses and present a car as wacky as the 1 and get the answer: “Heh, sure, go for it.” The 1 began life as 2013’s Volvo Concept Coupé, establishing a new Volvo design language that the XC90 later used to defibrillate the range. Volvo never meant to make the Concept Coupé but its designer, Thomas Ingenlath, is now Polestar’s CEO, so the concept has found its niche as a way to launch Polestar.

There’ll be just 1500 1s, all left-hand drive, and sold in only nine countries, including the UK. They’ll be built in China, and although it’s a plug-in hybrid, all following Polestars will be purely battery electric – as well as more widely available and, presumably, cheaper and less complex.

The 1 is an extremely complicated car, a vehicle with ravenous performance and luxury, a car of extravagance but the ability to cover 80 miles on pure-electric power. It’s a four-wheeled champagne socialist. Beneath the 1 is Volvo’s Scalable Product Architecture (SPA), the platform that forms the base for Volvo’s 60-series range and above. At only 4.5m long, the 1 is considerably shorter than other SPA cars, hence a chunk has been taken out of the wheelbase and floor, with some carbonfibre put back in its place.

There is also structural carbonfibre in the roof and pillars, plus all of the body panels bar the bumpers, which remain plastic for cheapness of fixing. The composite is costly and time consuming to use but allows tight radii on those rather dashing rear wings, reminiscent of the P1800 coupé’s, “but not retro”, says design director Max Missoni.

More significant, the composite gives greater structural rigidity and lightness. The 1’s body is 40% stiffer than if the whole caboodle were steel, and it weighs less. To a point. The twin rear-mounted electric motors, the double-charged and electrically assisted combustion engine, and 34kWh of batteries located down the spine of the car and behind the rear seats mean that this 2.07m-wide coupé with tiny +2 rear seats and not much boot still weighs 2350kg, despite not being (praise be) a crossover. 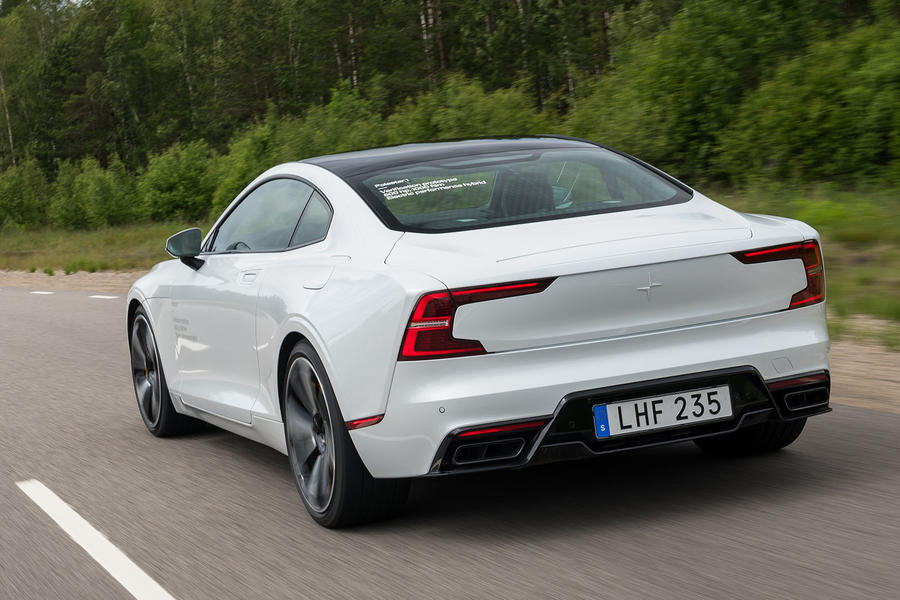 At this price and performance, then, the Polestar 1 sits among a vast array of alternatives: anything from a Mercedes SL to an AMG GT, or from a Bentley Continental GT to a Porsche 911 Turbo.

Let’s start inside. Polestar might be its own thing, but the interior architecture is pure Volvo, and none the worse for it. I’ve often wondered how far upmarket a Volvo cabin could be pushed and, with carbonfibre trim inserts and better-trimmed leather than usual, the current answer is £139,000, no problem.

It’s necessary to note that what you see here is a validation prototype car, too, with unfinished tooling and fit. There’s at least one more build phase before production proper, and yet it’s already better inside than some finished cars I’ve driven.

The ambience, then, is a posher version of something familiar. The front seats are big, the driving position comfortable and the +2 rear seats very small. There’s a saloon-style boot with some connectors made visible behind a panel, looking a bit ‘flux capacitor’ (ask your dad) and the rear seats don’t fold. Therefore, it’s not the most practical of coupés, but such is the will of its personality that I don’t think that matters much.

You spin the Volvo start button and the Volvo dials spring to action and you can scroll through various modes of propulsion, from full EV to four-wheel drive (everything always on). In zero-tailpipe-emission mode, it’s still brisk enough to keep pace with motorway traffic. In many-emissions mode, it feels Continental GT levels of quick.

The ride and handling give you fewer options. From the factory, those Ohlins dual-flow valve dampers are set to positions nine (front) and 10 (rear) of 22, and I suspect that’s where most of them will stay. They give the 1 an acceptably pliant ride, despite 30-profile, 21in, bespoke Pirelli tyres.

But moreover, it has a tremendous consistency, with a good ability to smother small bumps without the ‘sproing’ and echo of air springs, but just as key is a restrained roll rate, and particularly deft body control for a car of this weight. It might just be the best EV/PHEV driver’s car to date.

Choosing those gold Ohlins shocks over adaptive dampers is a little weird, nerdy, expensive – all Polestar’s words, incidentally. And there is only one steering setting, moderate of weight and speed, with a nice build-up of torque away from a very stable centre.

The whole set-up is very much focused on the way the engineers like it. It’s like a rock radio station that doesn’t take requests. It’s keyed to the road surface, with torque vectoring at the rear axle, which puts in effort even during mild cornering, overdriving the outside rear wheel to increase agility. It’s not so much that you notice it happening, they say, but you’d definitely notice it if it didn’t do it. I believe it. Few cars of this mass feel this agile. It’s decidedly well integrated and curiously rewarding. 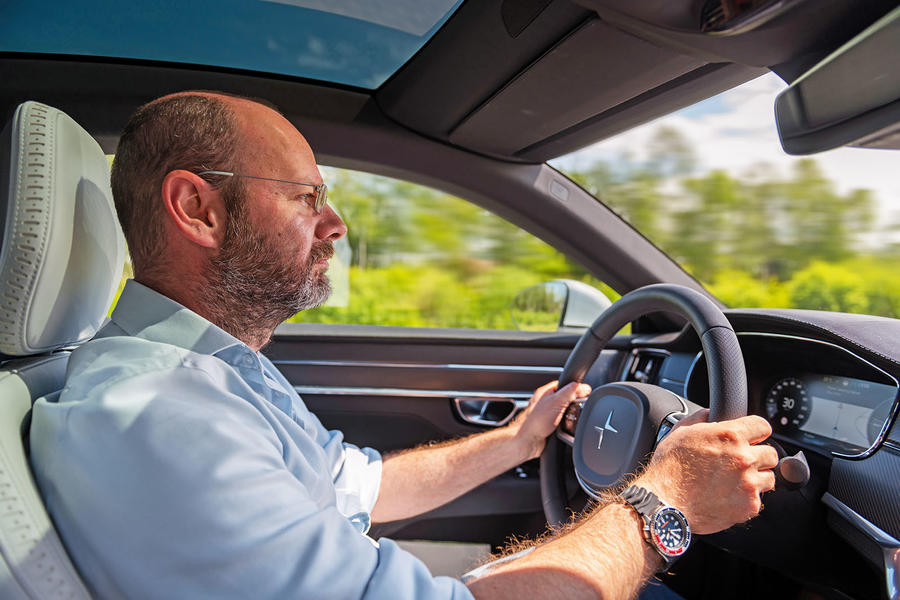 Given the 1 is not yet finished, I don’t have to give it a star rating. In a way, it doesn’t really suit one. This is a car with loads of alternatives but none of them is a natural rival to a coupe that's slightly bewildering, has a great sense of fun, and feels like it'll be thoroughly well finished inside. 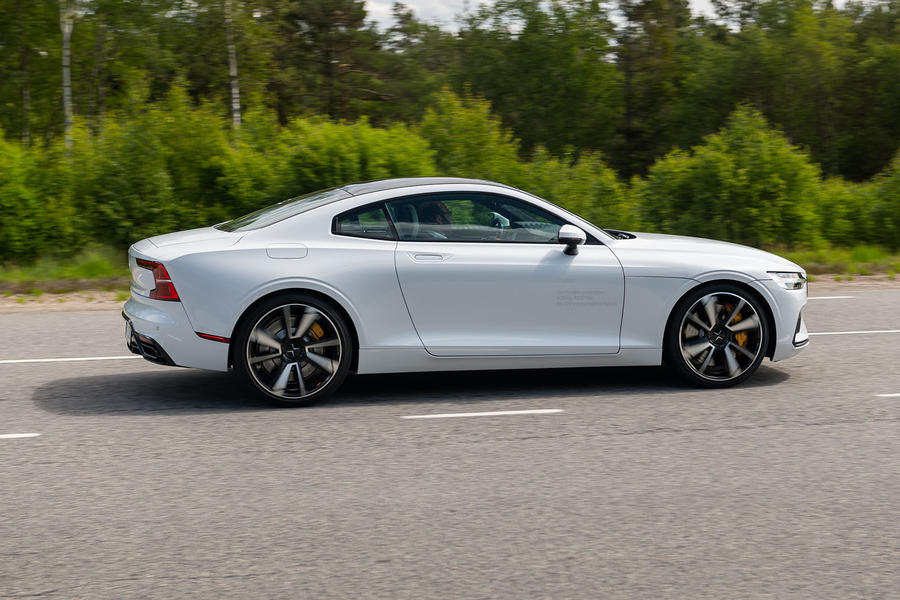 I love to buy this amazing car.

At 1500 total production run it's not going to wash it's face as a commercial endeavour, so what's it for? Marketing?

Price competition may be Bentley continental GT but it's hard to escape the comparison Pole Star themselves invited - with the Tesla model 3 which is greener, quicker, more available and *much* cheaper.

Also having 70% the battery capacity of Model 3 SR but little more than 1/3 the electric range begs s question or two.

Finally the driving experience - PHEV drivers seem to fall into two camps: the ones that don't bother to charge it, and those who do and spend their entire driving time trying to avoid the engine coming on. One reason why EVs are growing much faster than PHEVs.

£140K...that's insane for what is broadly the same interior architecture as all their other cars.