If you’re Mercedes-AMG, the E-word means swapping the humdinger V8 in your most popular product for a four-cylinder hybrid, and you probably don’t like the idea too much. In fact, you probably hate it.

But if you’re Peugeot, and electrification allows you to take existing four-cylinder models and punt them up into an unexplored realm of extreme performance and fun, you might just be more game.

You might even enlist your motorsport department to help create a new sub-brand called Peugeot Sport Engineered (PSE). Et voilà: Peugeot’s answer to Volkswagen’s R, or even AMG, but with the unique approach of putting electrification front and centre, with a range exclusively made up of performance plug-in hybrids.

These cars will be based on regular models, although the significance of Peugeot Sport’s involvement is that it knows a thing or two about fast hybrids. The motorsport division’s exact level of engineering input isn’t obvious, but it is substantial, and the redeployment of personnel to work on PSE road cars was supposedly the reason behind Peugeot leaving the World Rallycross Championship in 2018.

Peugeot Sport has also been involved in the Dakar Rally and the Le Mans 24 Hours (winning it twice in the Group C era) and, as well as toiling away on powerful hybrid concepts, it’s now developing a 670bhp 2.6-litre hybrid hypercar for the World Endurance Championship. Dyno work for the V6 begins this month and track testing of the car, whose rivals will include new machines from Ferrari and Toyota, will start this winter.

All of which is to say that fast hybrids are no joke at Peugeot, not least this new 508 Peugeot Sport Engineered Hybrid4, which starts at £54,000, will go on sale in May and is the first car to wear the new PSE badge. Or indeed logo, which consists of three lines. Sorry, claws.

Rakish, isn’t it? Rapid, too. The 355bhp powertrain is an adapted version of that found in the existing 508 Hybrid 225, only in this case the output of the transversely mounted 1.6-litre turbocharged petrol engine rises from 178bhp to 197bhp. The disc-shaped electric motor annexed to the eight-speed automatic gearbox is unchanged, contributing up to 109bhp, but unique to the PSE is another motor at the rear. This can deliver up to 111bhp and gives the car four-wheel drive, albeit without any form of coupling between the axles.

You might wonder why this car doesn’t make 417bhp, which is the figure you get when you add up the outputs of the three power sources. The limiting factor is the 11.5kWh lithium ion drive battery that sits beneath the rear seats (where it doesn’t impinge on interior space in the fastback or the estate tested here). It won’t allow the motors to draw more than 158bhp between them, although the rear motor is favoured when it comes to divvying out electrical energy.

While we’re at it, the 508 PSE’s electric-only range is 26 miles, with CO2 emissions of 46g/km culling its company car tax liability. 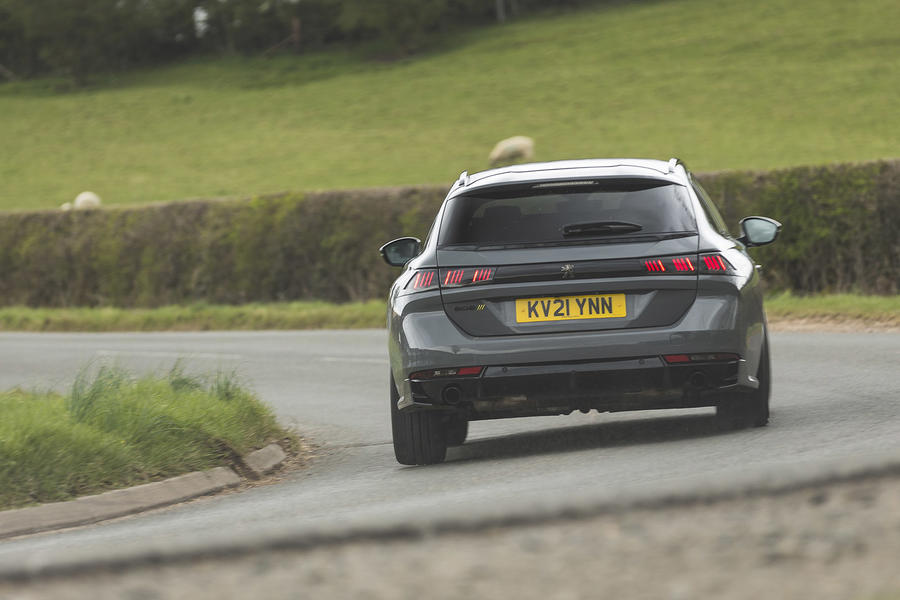 Just how quick is the 508 PSE? Quick enough to justify its Kryptonite yellow accents? And the three aero flicks that try rather too hard and likely exist only to keep the unaltered 508 body commensurate with the PSE’s widened tracks?

I’d say not. Just 5.2sec to 62mph is pretty frantic by most standards but still lags half a second or so behind the non-hybrid AMG C43 Estate and BMW M340i Touring and also behind the mild-hybrid diesel Audi S4 Avant. The French PHEV is slower despite having similar power because it weighs more, at 1875kg. Volvo’s V60 Polestar Engineered is closest in concept and heavier still, but with 405bhp, it dips well below the 5.0sec mark. Peugeot therefore finds itself slightly adrift of the pack.

Not that such figures especially matter with this kind of car. Like its rivals, the 508 PSE has been conceived as a quick but laid-back GT-style family car that can, on the right road, also reward its driver. And that’s where the PSE alterations come into play.

Track widths are up by a healthy amount: 24mm at the front, thanks to longer wishbones, and 12mm at the rear, due to spacers. There has also been an increase in negative camber, and the Michelin Pilot Sport 4 rubber seen on the next-fastest 508 has been upgraded to 4S. It’s wrapped around 20in alloy wheels that sit so snug within the arches that there’s something aftermarket and almost illicit about the PSE’s stance.

The anti-roll bars have also been thickened and the adaptive dampers are all new for the PSE, as are the Alcon brakes and the calibration of the electric power-assisted steering.

You notice all these changes at once. Not always individually, but in the general manner of the car, which is more precise, assured and meatier than that of any regular 508. That’s quite nice to feel in a big Peugeot. Some intent.

This also remains a comfortable and interesting cabin. One that, with a few bespoke touches and the superb low-slung, ribcage-cupping sports seats, adopts the sporting atmosphere with ease, but for one big failing.

Peugeot’s quirky i-Cockpit, in which the dainty steering wheel sits low and invites to view the digital instrument binnacle over the top of the rim, might work well in perched-up city cars and SUVs, but when you actually want to sit as low as possible, it’s a disaster. At 6ft 1in (not an unusual height), there are times when I can't even read the dials, and that gets tiring, not to mention hazardous.

But you learn to live with that, and on the move you'll then spend your time in one of Electric, Comfort, Hybrid or Sport mode, all selected via the toggle switch on the transmission tunnel. Electric locks the powertrain into almost-silent operation, and the 508 PSE works serenely well as an EV, albeit with only faint levels of regenerative braking. It’s calm and responsive, with the rear motor doing the lion’s share of the work.

Run out of charge or select any of the other modes and the engine can come into play. It’s an unromantic unit: too gruff and monotone, not £55,000’s worth; and at low speeds, the car sometimes can’t decide which of its powertrain elements to engage, meaning you get the odd driveline hiccup or shuffle. At trundling speeds, the ride quality sometimes also flirts with being brittle. Not to the point that it irritates, and things smooth out to startlingly good effect at pace, but you’re certainly reminded of those manhole-cover 20in wheels and the spring rates, which are 50% higher than those of the regular 508.

The chassis adaptations pay dividends when you properly drive the 508 PSE, though, because it’s a brilliantly effective cross-country bruiser.

Put your foot down in Sport and the motors punch you forward before the engine is belatedly matched with the correct gear. With all three power sources involved, the car then feels quick, although not startlingly so. What's quite unusual - and frankly suits the Peugeot well – is the vague single-speed feel of the driveline. You never get involved with the flimsy paddleshifters because this ’box simply isn't precise enough to reward your efforts, but there's rarely any need to tee up the engine with a downshift or two anyway, because the motors fill the void.

So while it may not be the quickest car in this class, what the 508 PSE does give you effortless acceleration the moment you want it, and in the real world that's quite nice.

However, what's really striking about this car is the sense of vast security underwheel, the confidence that the flickably swift steering inspires (surprising, that) and the suspension's deft blend of roll control and pliancy. And the fact it hides its weight so well. The handling is front wheel-drive hot hatch in flavour, only more mature all-round, perhaps a little more benign, and with the rear motor subtly neutralising the balance and trimming understeer.

Progress isn’t at all dull, though. In fact, the 508 PSE is quite playful and agile. The front axle is dependable and sharp enough that you can trail the brakes and rotate the body through bends, but even if you don't want to drive that way, this chassis loves to be placed just so on the road. Nose right at the apex, or outside Michelins nestled up to the verge. Dynamics that are cohesive and malleable allow and encourage that kind of driving; only the woolly brake pedal detracts. 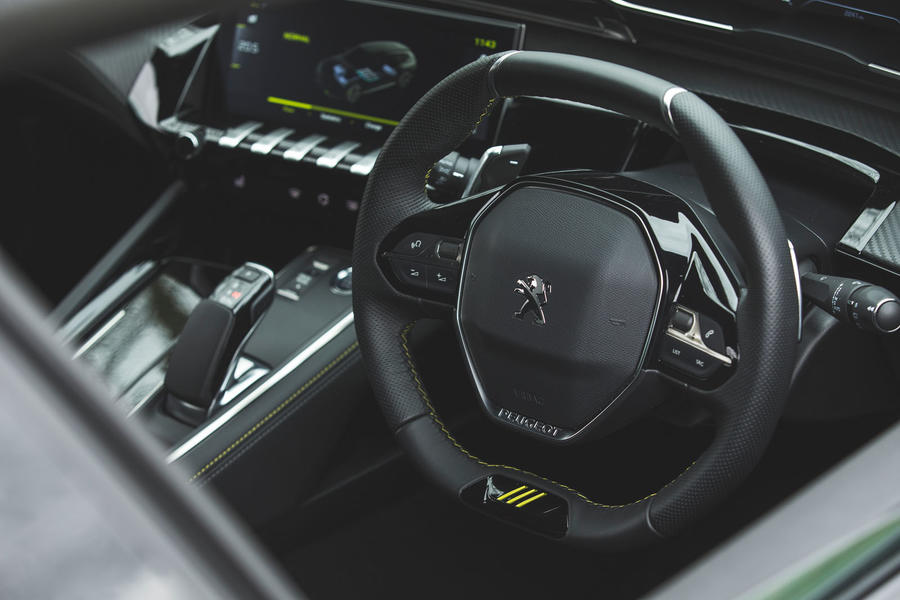 Curious, isn’t it? The electric bit of the PSE equation is clever, effective, and potentially very economical.

But the real story here is that Peugeot has found its handling mojo, and with the kind of product that isn’t going to fall prey to emissions rules any time soon. And, it must be said, in a fashion that doesn't really hurt ride quality. A little too much tyre-roar aside, this big Peugeot is as happy on motorway as it is on B-roads.

Alas, the 508 PSE is no class-leader, being a touch rough around the edges both in terms of its driveline and cockpit, but it’s an interesting, versatile and entertaining contender all the same. I guarantee you'll like it more than you think you will. You might even love it. 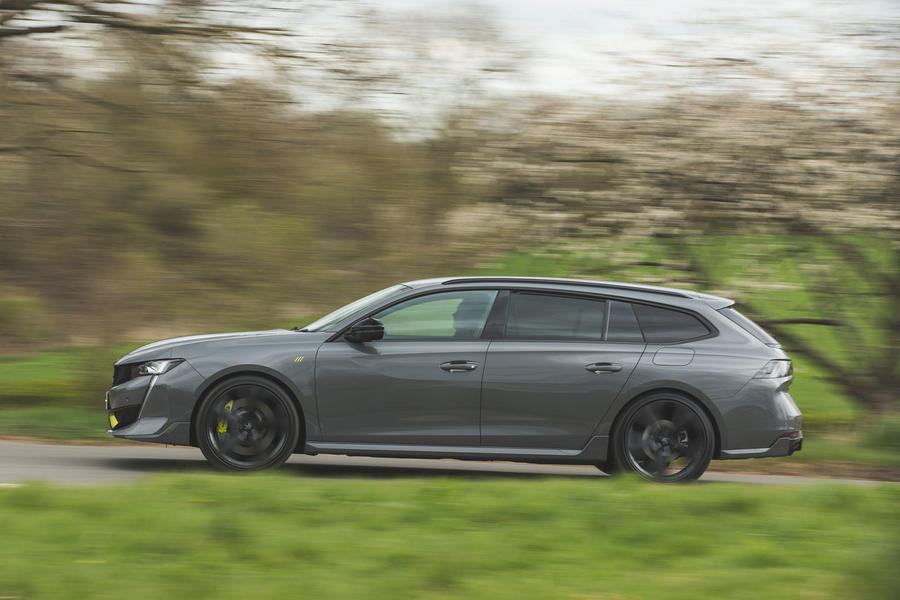 What a cracking looking car! Ireally does look good. Expensive? Sure, but I don't care. I like that it exists. I wish they were making the new 308 with this powertrain

michael knight 14 April 2021
Wha wha depreciation, non premium brand, 4pot. No wonder we end up in a sea of Skoda's and VWs in this country. We really do deserve what we get on this isle.
Citytiger 14 April 2021

Its too expnsive, the Volvo V60 Recharge Polestar PHEV mentioned in the review is cheaper, quicker and more powerful, with a greater pure EV range..