From £21,2758
This cheaper of two PHEV versions might well be the smarter bet. It performs and handles well but still won’t suit practicality centred buyers
Open gallery
Close

Well, it’s clearly not the retro revival for the 1980s Peugeot 309 that might have seemed like a pretty solid bet hitherto, with car design trends being as they are. Rather, this is the new Peugeot 308 family hatchback, fresh onto UK soil in right-hand-drive form - and it makes for three straight model generations of the 308 for the French car maker now without a model-identifying digit change.

Most of Peugeot’s other model numbers end with an eight now, you’ll have noticed. I suspect that’s got more to do with building equity in a given model identity over decades than the simple fact that - as is so often reported as if it were brand-new information - eight is indeed considered a lucky number in China. (The Chinese market is actually much less lucrative for Peugeot today than it was a decade ago.) 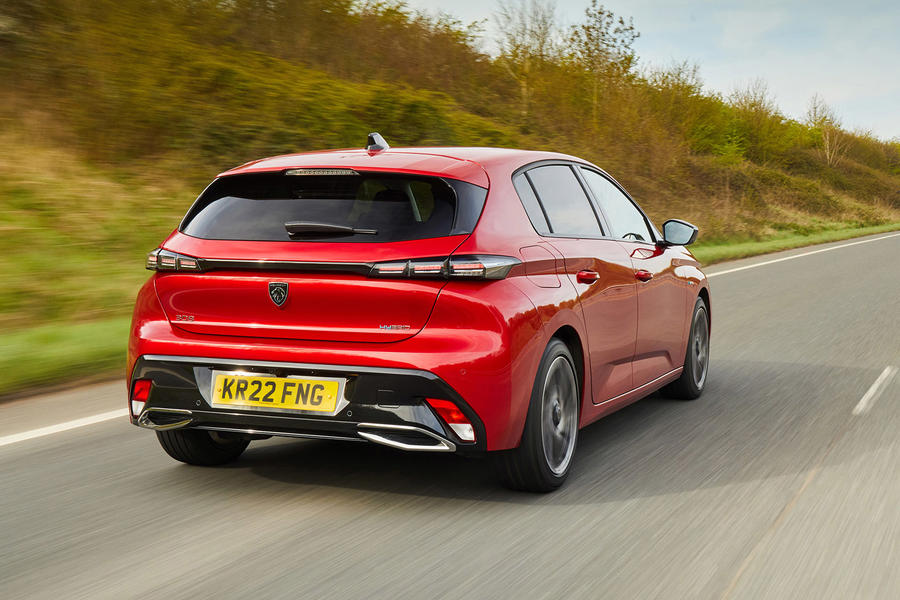 This is one of those half-new ‘all-new’ models. It inherits a widely revised version of the last 308’s model platform (although the new car is both longer and lower than its predecessor) as well as updated versions of the old car’s 1.2-litre turbo petrol and 1.5-litre turbo diesel combustion engines. But it has two new plug-in hybrid petrol-electric powertrain options (one of which we’re testing here) and an all-electric Peugeot e-308 derivative will be introduced in 2023.

This looks like an ‘evolutionary’ styling update to these eyes, but that may be simply because Peugeot is currently consolidating its aesthetic rather than reinventing it. We’re used to what we’re seeing, in other words. It’s a pretty striking and appealing design in any case: all slim featured and sharply defined, with what still seem likeably compact dimensions despite the modest growth spurt.

Inside, the 308 is roomy enough in the front, but still quite short on both leg room and head room in the back so as to rule it out of a conversation about regular transport of a family of grown-up kids, where something like a Skoda Octavia, Honda Civic or Kia Ceed might still feature. Even the longer-wheelbase 308 SW estate version isn’t particularly spacious in row two; and boot space (which, market research suggests, hatchback buyers tend to prioritise over second-row passenger space in any case) has actually decreased compared with the previous model, with hybrid versions offering even less cargo space than regular derivatives.

The 308’s driving position, with its high-set instruments, low-slung steering column and downsized steering wheel, still seems curious at first - and it hasn’t changed much for this new model generation. You still feel as though you have to lock the steering wheel unnaturally low between your knees in order to see the car’s 10.0in digital instrument screen over the top of the flattened-off rim; and even when you do, the slightly squashed shape of the wheel itself means that, when you’ve got a quarter-turn of lock applied around roundabouts, your view of the instrument screen is blocked anyway. The unfamiliar feel of it passes with time, of course, but I’m still not sure I’d ever warm to Peugeot’s i-Cockpit ergonomics sufficiently as to prefer them to a conventional control layout, which is what the company claims its owners all unfailingly do.

Elsewhere, however, less qualified credit is due. Peugeot has presented and finished the 308’s interior with the familiar material style and flourish we’ve come to expect of it in recent years, but also lifted what we might call the 308’s underlying cabin quality quite a bit. Even the minor switches and harder-to-reach mouldings in the car feel solid and are quite appealing to the touch, while storage space is provided widely and freely around the forward passenger compartment.

And there’s major news on the topic of oddment storage. This is the first new right-hand-drive Peugeot that I can remember driving that gets a full-sized glove compartment, the company evidently having finally worked out how to move the left-hand-drive fuse box, which was the cause of the regrettable banishment of so many PSA Group driver’s handbooks to the passenger-side door bins of the history throughout the 1990s and 2000s. It's surely a major accomplishment for the British motoring press, which has been moaning about half-sized glove compartments in right-hand-drive Peugeots and Citroëns for decades, if ever we had one.

Out on the road, the 308 is a fairly agile-, fluent- and sweet-handling hatchback, even in PHEV form (in which the car weighs 300kg more than when combustion-powered, incidentally). If you want the car at its dynamic best, I’d recommend a sub-1300kg 1.2-litre petrol in mid-level Allure Premium trim and on 17in wheels, but even the hybrid is a keener and more composed steer than so many bigger, stodgier-feeling hatchbacks.

The petrol-electric powertrain responds keenly and smoothly on part-throttle; has good drivability and refinement, with the combustion engine remaining unobtrusive even when it’s running; and offers more than enough outright performance for a convincingly brisk stride.

Performance in electric mode (in which the gearbox is used to boost performance and efficiency in higher-speed running) is more than adequate even for out-of-town driving. Meanwhile, although the car’s tax-qualifying ‘Equivalent All Electric Range’ claim may be north of 40 miles, this first test suggests that 30 to 35 would be a more achievable everyday real-world return, depending where and how you’re driving – pretty decent for the class and price. 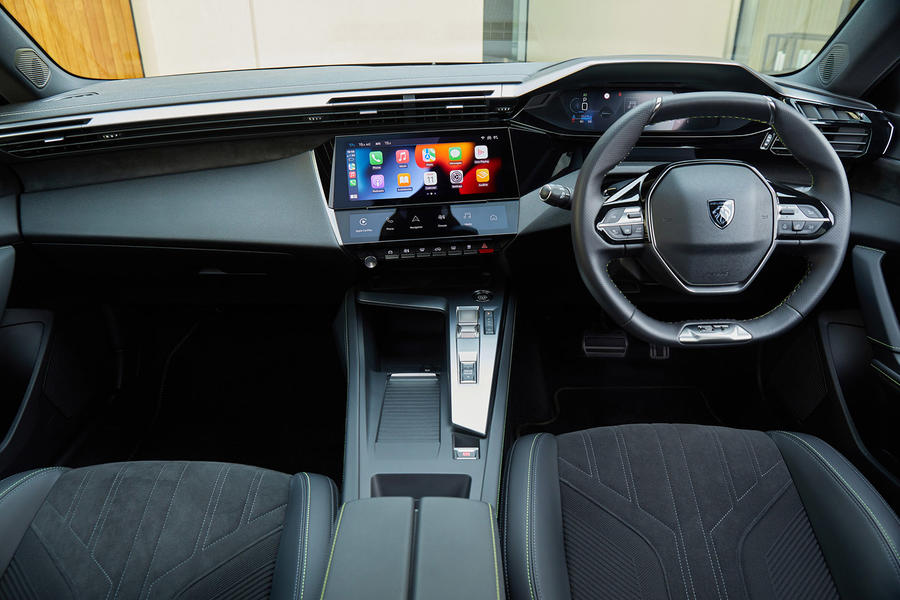 The Peugeot 308 Hybrid 180 and 225 models make exactly the same peak torque, and only a tenth of a second separates their 0-62mph performance claims, so you’re really not giving up much if you save a few quid on the cheaper of the two.

If you’ve got benefit-in-kind tax savings in mind, this being an 8%-qualifying car will put it in a favourable position. Moreover, if you can charge it regularly and cheaply and do plenty of short-range motoring, it should certainly pay you back in fuel cost savings the extra it costs in monthly finance over a conventional petrol 308.

If you’re looking for outright space or value for money, on the other hand, you’ll find more convincing options than this elsewhere in the hatchback segment, never mind the wider market for compact cars. Even so, this feels like a successful overhaul of a car for those who like their family hatchbacks a little bit compact, chiselled, dynamic and desirable. It doesn’t cover every base and isn't for every taste, but it’s got plenty going for it all the same. 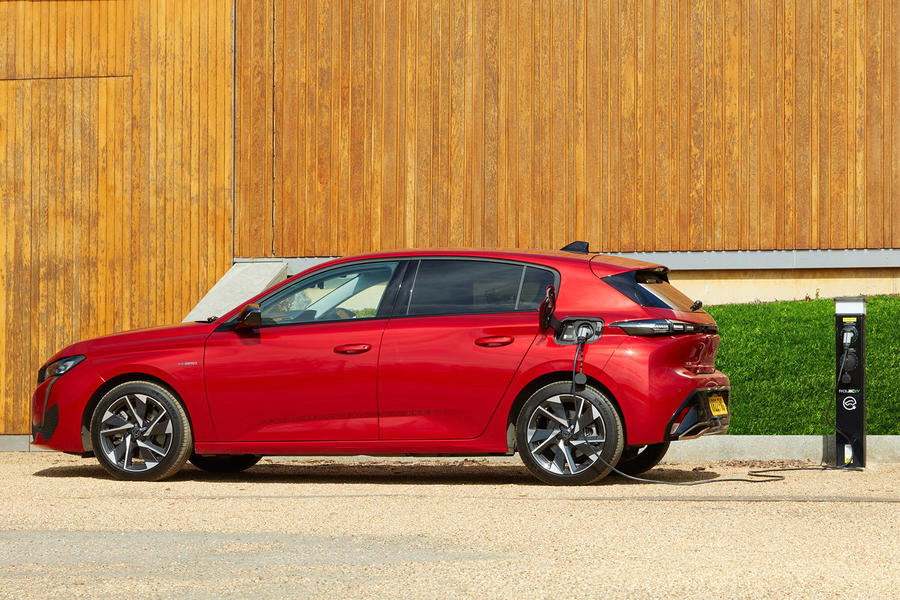 Log in or register to post comments
si73 11 May 2022
This is a great looking car that apparently drives well and if it fits your needs will do the daily grind in EV mode with an economical engine for longer drives. I'd prefer a straight petrol of full EV personally, but this is a reasonably priced (compared with competition) halfway house.
artill 11 May 2022

The 308 seems pointless to me. There isnt enough room in the back to justify it being a family car. A 208 is tiny in the back too, but the difference isnt great. If you must have a Peugeot, a 208 makes more sence.

I looked at the Renault website (French version) yesterday and his review supports my view that nowadays the French manufactures have decided if you want a family car you should buy a Crossover or an SUV. This depsite the bulk of those vehicles making them less environmentally friendly than a more traditionl car and the old Peugeot tradition of longer wheelbase models.

I think platform sharing may have gone too far as a tall crossover can be made to use similar underpinnings to a hatchback. Although, the Dacia Jogger suggets that with thought a more conventional family-sized car is still possible.

Andrew1 11 May 2022
Manufacturers give buyers what they want to buy. The sales of saloons and traditional hatchbacks have dropped dramatically, particularly for non-"premium" brands, but the sales of SUV-like models have skyrocketed.
View all comments (6)