From £18,7408
Pivotal new-generation family SUV touches down in the UK for the first time. Does it deliver?
Open gallery
Close

You will struggle to find a bigger British automotive success story than the Nissan Qashqai.

Sure the badge on the nose is Japanese, but in terms of design, execution and manufacture, this crossover is almost entirely a product of the UK, as it’s designed by Nissan's London studio, developed at its Cranfield technical centre and built in its Sunderland factory.

Crucially, it has also been a smash hit in the sales charts. It’s up for debate whether the Qashqai really was the first true crossover (Matra Rancho, anyone?), but what isn't in doubt is that it was the first to make the concept popular. From the pioneering 2007-2014 original Nissan Qashqai through to the 2014-2021 Qashqai of the second generation, the Nissan's mix of rugged off-road style, family-friendly practicality and a driving experience sharper than that of the average SUV have enabled it to find more than three million homes.

Yet when that first Qashqai arrived 15 years ago, it essentially existed in a class of one; now it faces more than 30 rivals offering a similar SUV-infused schtick. It’s still the number-one player in the C-SUV segment, taking 10% of sales in the UK, but Nissan knows that it can’t rest on its laurels for this all-new third generation machine. Promising more space, greater quality, enhanced technology and even sharper dynamics, the latest Qashqai will need to be on top of its game if it maintains its place at the top of the pecking order.

Despite what’s at stake, Nissan clearly hasn’t played too safe with the design, with its sharp creases, bold curves and wheel-at-each corner stance helping clearly give it a bolder look than its predecessor and inject some of the desirability through distinctive design that made the original such a stand-out.

As with the smaller Nissan Juke crossover, a two-tone roof is now standard, while our top of the range Tekna+ models get arch-filling 20in alloy wheels. 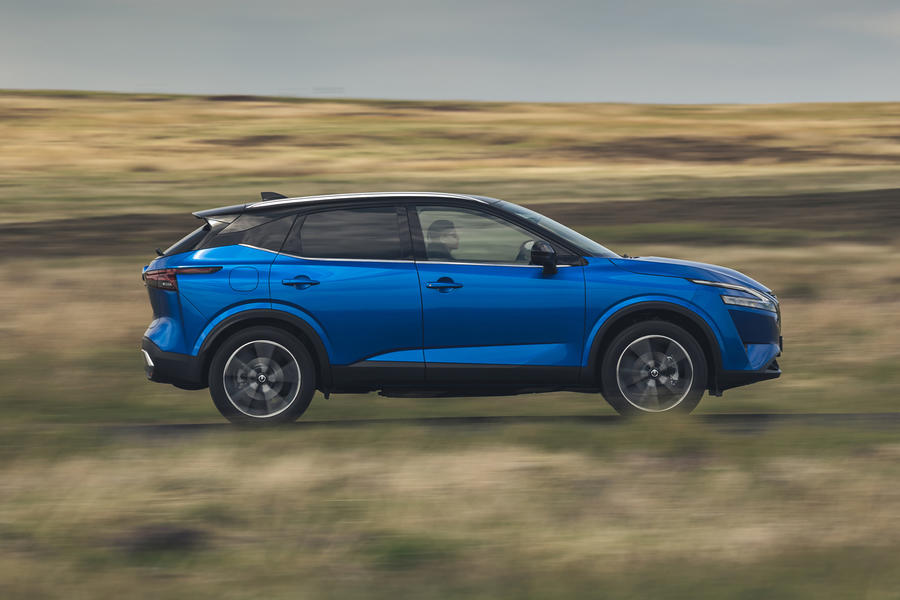 Underpinning this Qashqai is the new CMF-C architecture, which is 60kg lighter than the old car’s, despite being 35mm  longer, 32mm wider and 10mm higher, plus boasting a 48% increase in torsional rigidity. These weight savings have been achieved through the extensive use of aluminium (bonnet, doors and front wings) and the use of high-tensile steel and a composite tailgate.

As you would expect, the increase in size pays off in terms of interior space – which, let's face it, is likely to be a big draw for potential Qashqai custodians. There’s an extra 28mm of knee room for rear seat passengers and a dash more shoulder room for all, while the boot has ballooned to 504 litres, which is one of the most capacious in the class. Crucially, it’s packed with family-friendly features, too.

The versatile movable boot floor is retained, now with a reversible wipe-clean side, while the door pockets are bigger and the handy cubbies more numerous. Perhaps best of all are the rear doors, which can now be opened up to 85deg - perfect for loading and unloading children. As a car for the rough-and-tumble of family life, the roomy Qashqai is up there with the thoroughly sensible Skoda Karoq.

Like its Czech rival, Nissan has attempted to take a step upmarket inside. Some scratchy plastics remain lower down in the cabin, but elsewhere it’s soft-touch materials as far as the fingers can feel. It’s perhaps not as boldly designed as the exterior, and while the larger 9.0in infotainment touchscreen is a doddle to use, its graphics still lag behind the best for clarity.

But overall the cabin is comfortable, well laid out and easy to use. The physical shortcut buttons and traditional rotary dials for the climate controls are particularly welcome in world increasingly populated by touchscreens, while the widescreen heads up display is brilliant in its clarity. No, it won’t have traditional premium brands or even Volkswagen quaking yet, but it's a significant step up in quality over the old car, particularly on the outside, where you get consistently tight panel gaps and glossy paint finish.

Where the Qashqai really needs to make strides over its predecessor, however, is on the move, where cars like the Mazda CX-30 and Seat Ateca have shown the Nissan to be a little on the stodgy side. The reduction in weight should help, as should a new electric power steering system that’s mounted directly to a quicker rack.

Opt for the 20in wheels like our car and the torsion-beam rear suspension is ditched in favour of the same multi-link rear axle as the forthcoming four-wheel-drive machine. As before, MacPherson struts are used at the front. 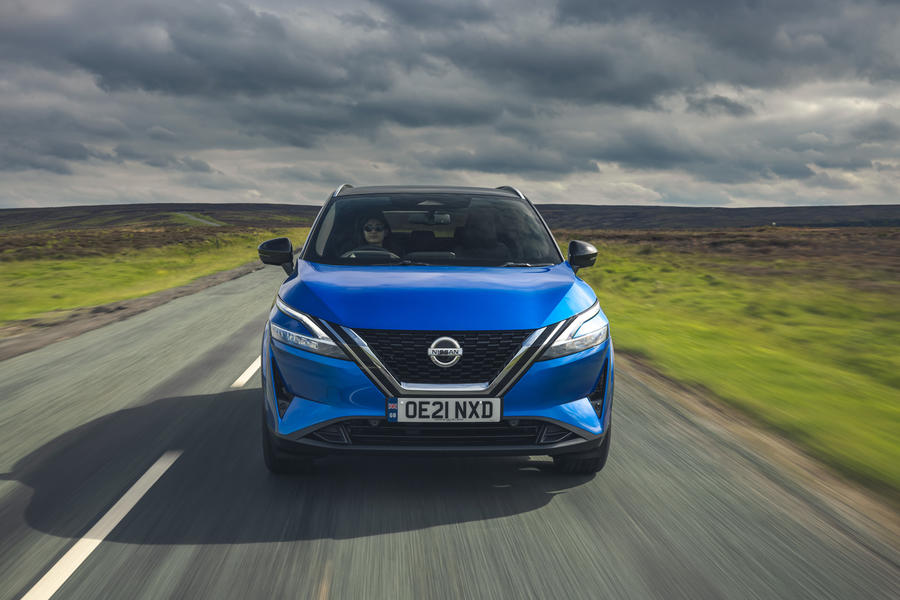 You can feel the changes to the steering straight away. It’s still rather lifeless, but the Qashqai now dives into corners surprisingly keenly, pivoting nicely around your hip, clinging on gamely. There’s some roll, of course, but it’s controlled well, and it feels nicely tied down even over bumpy and bucking surfaces. There’s precious little feedback or reward for trying hard, but the Qashqai can be hustled when you’re in the mood.

When you’re not in a hurry, the Qashqai is relatively calm and relaxing, with low levels of wind rustle and excellent rolling refinement, with very little noise from the suspension. That said, there’s an underlying firmness to the ride, especially on those vast rims. At higher speeds, the car can fuss and fidget, particularly over higher frequency undulations (cars on smaller 19in wheels with torsion-beam rear suspension are only marginally more compliant), although it’s no worse than you get from most cars in this class.

Perhaps the biggest disappointment is reserved for the drivetrain. For starters, there’s no real nod to electrification until the hybrid model arrives later in the year, while fully electric and plug-in hybrid Qashqais appear to be off the menu completely (Nissan argues that people wanting that technology will look elsewhere in its range).

So for now, the only option is the familiar turbocharged 1.3-litre petrol engine, which for Qashqai has been given a mild-hybrid starter-generator (although whereas almost all rivals get 48V systems, this is powered by a smaller, lighter 12V cell).

Despite the added benefits of torque-fill from the small electric motor, the Qashqai feels sluggish at very low revs. Above 2000rpm, there’s a decent welt of muscle, so the car feels brisk, with decent sixth-gear roll-on acceleration on the motorway. You can extend the engine, but it feels a little breathless; and in truth, it does its best work in the mid-ranges.

We sampled both the improved X-tronic CVT and the six-speed manual gearbox. The former masks the engine’s off-boost torpor but suffers from an irritating surge in acceleration at more than quarter throttle that’s disproportionate with your inputs, plus it doesn’t feel well integrated with the start-stop system, sending a judder through the driveline as each time the engine cuts in and out. Overall, the manual is a better bet, even with its notchy action and spongy clutch feel. 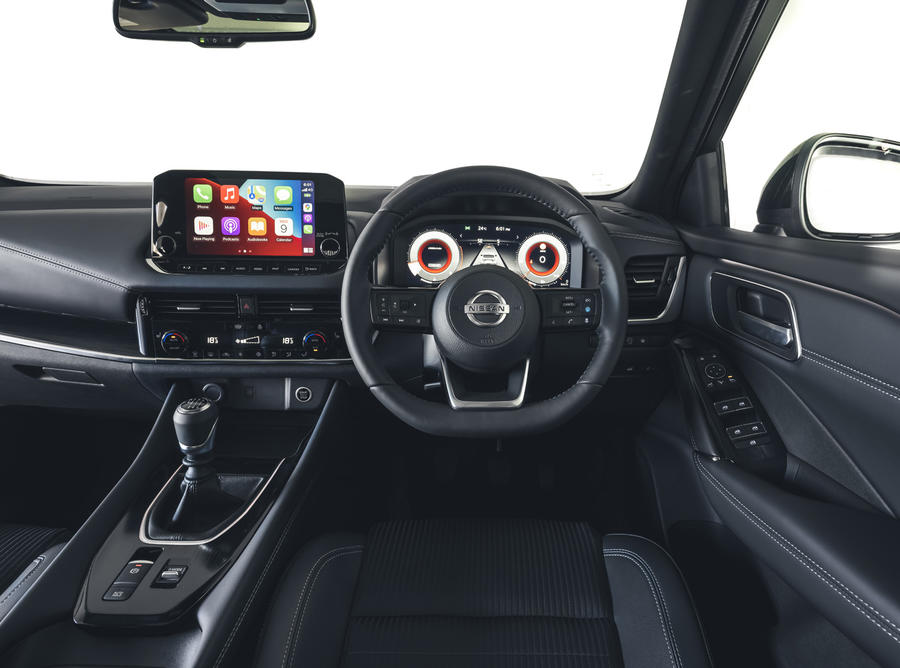 Dynamically, the Qashqai has taken a big leap forward over its predecessor; but if you place driving pleasure at the top of your shopping list of priorities, there are others in this class that will give you greater satisfaction as you slice through a series of corners, not least the CX-30. Yet for the vast majority of buyers the Nissan’s mix of style and substance will likely trump handling elan when it comes to handing over their hard-earned.

It not only looks good and is well equipped (there’s a list of standard active safety systems that’s longer than a crash-test dummy’s arm), it also features one of the most intelligently designed and neatly packaged interior layouts in the business. This is a car that’s been designed with family use at its heart.

Factor in the inevitably tempting PCP deals (as little as £299 per month, according to Nissan’s people in the know) and it's not hard to foresee Qashqais continuing to fly out of showrooms. The competition is crowding in, but with these updates, it's difficult to see any knocking the Qashqai off its top spot just yet. 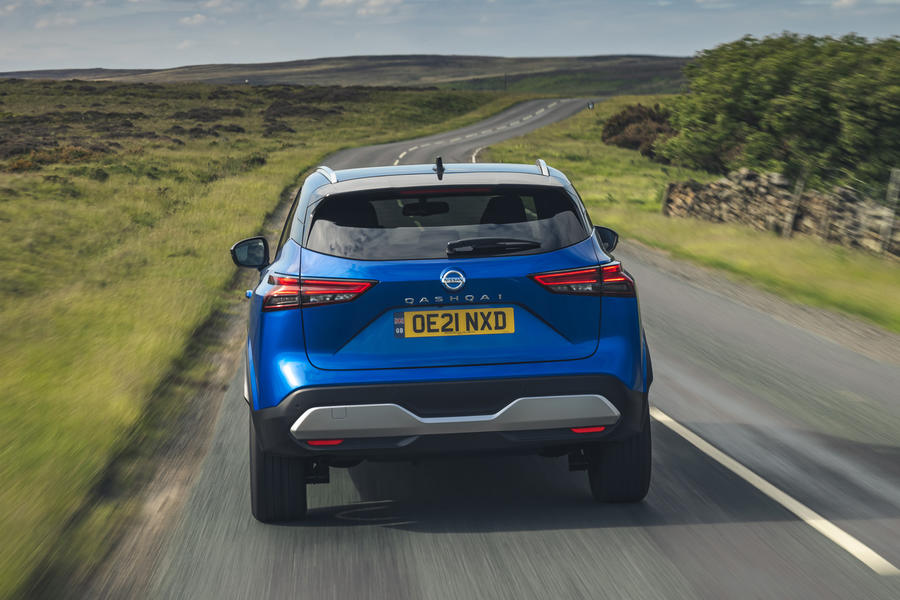 like the colour shame it just a cloned Renualt spent all this money on design and develoment and thats the best they can do on the dash was thinking of getting one not now that I have seen these pictures and they still insist on putting CVT gearbox in it yuk.

With so-so gearbox, a firm ride and no hybrid or elctric drivetrain, I too am stuggling to see why this car deserves 4 stars? The dashboard is also really dull compared to, say, a 3008.