From £14,9358
No longer the trail-blazer, but improved enough to beat away its numerous foes?
Open gallery
Close

It’s the second-generation Nissan Juke: bigger than before, more ‘mature’, and now the Nissan is driven on British roads for the first time.

Fans of the oddball 2010-2019 original Nissan Juke (and with more than one million sold since 2010, there are a few) will already know a bit about this new model. In August, Autocar got an early taste with one of Nissan’s late-stage but imperfect prototypes at Millbrook Proving Ground. Two months later Matt Prior drove the finished Nissan Juke article, though the glass-smooth roads around Barcelona can make even an Elise ride like an E-Class.

So any test on British roads – including the comprehensive road-test proper that's yet to come – matters, and not only in terms of ride assessment but also because hiding behind its Japanese badge is a very British car. The latest Juke was designed at Nissan’s European Design Centre in Paddington, London, then developed at the brand’s hidden R&D hub in Cranfield and will be built in Sunderland, to the benefit of 34,000 jobs in assembly and through the supply chain.

As far as buyers are concerned, the end product is refreshingly simple. For now, the Juke gets but one engine: a turbocharged 999cc petrol triple with direct injection and 115bhp. Diesel is out for good, but given that the car’s CMF-B platform is shared with the Renault Captur – its corporate cousin, and one already earmarked to receive hybrid power – some form of electrification is possible, if not yet probable.

For the gearbox, there’s is a choice of either a six-speed manual or seven-speed dual-clutch auto, the latter reducing driver effort but also slackening performance. The Juke is otherwise typical fare for the supermini segment – raised ride-height or not – with a torsion beam at the back and MacPherson struts up front.

The suspension still uses passive dampers, though as we’ll discover, the setup has been noticeably retuned, and there are now smaller, secondary springs housed within the dampers themselves to cushion rebound strokes. The standard tyres are from Bridgestone, and are said to offer the same traction and grip as the wider rubber found on the old Juke Nismo. 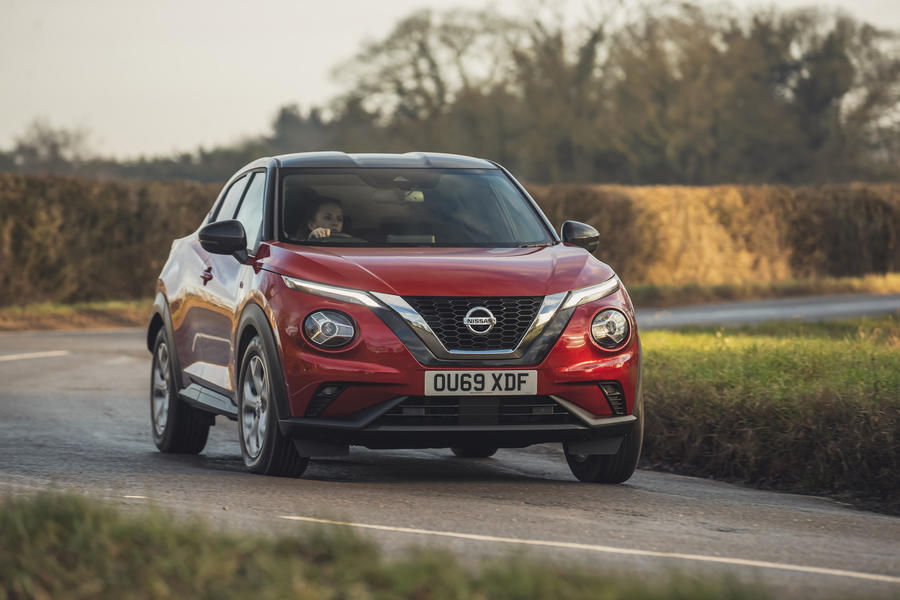 Not as odd as before – much less Pike Factory, if you know your quirky Nissans – but still unmissable. The huge, Hella-style headlights that look as though they should be fog lights remain, but the daytime-running lights above them are slimmer and now much more integrated into the Juke’s stern face. The old sidelights were perched atop the bonnet like those you’ll find on a Mercedes G-Wagon, but were changed because of their poor aero qualities and the fact they were pretty divisive among owners.

Elsewhere, both the front and rear wheelarches are less cartoonishly curvaceous but the greater expanse of bodywork between them is now aggressively scalloped, and the boot aperture is wider because Nissan has split the tail lights between the hatch itself and the corners of the bodywork, rather than mounting them entirely on the latter. There’s also greater rake to the front and rear screens, and, with a body that’s longer and wider than before, the designers achieved their aim of making the Juke look more stable, and better stuck to the road.

But the Juke isn’t really stuck to the road – and I mean this in the positive sense. Point it down a B-road and you’ll wonder exactly how the brand managed to make the closely-related Nissan Micra so dreary to drive when it’s clearly capable of much better.

The steering is genuinely good, being quicker to respond than before but not at all nervous and with a slight firmness off-centre (there’s now a touch more castor angle) that builds nicely as the front tyres load up. Casual drivers will still find the ride on the firm side, and more so on the larger 19in wheels (genuinely, unless you crave the stance-enhancing larger size, stick to the 17in items), which make for a choppy low-speed gait, but get the Juke going up near the national speed limit and that firmness translates into a taut flow and body control rare in this normally underwhelming class.

The Nissan has unexpected poise, is accurate, easy to place and confidence inspiring; it also doesn't roll much at all, carries speed well, and with good front-axle grip (relative to the rear – despite new rubber, the Juke's no limpet) has a Ford-like keenness for neatly bringing its tail into play. Which is interesting, because given the standards set by the latest Ford Fiesta and Ford Focus, you would expect the upcoming Ford Puma – a head-on Juke competitor – to be better still, but we’ll have to wait to find out. Somebody, at some point, has to make this class interesting for enthusiasts. There's too much talent in the industry for it not to happen, and it feels like we're getting close.

Elsewhere, it’s more ordinary. The light action of the six-speed gearshift (whose plinth is brightly red-ringed at night-time) is too generously damped and long of throw, and the engine never displays much hunger for revs. It seems a distant, remote thing, though our test car’s factory-fresh DIG-T unit probably had still to loosen up. The flip-side is that, even during motorway cruising with 2500rpm on the tacho in sixth gear, the Juke’s cabin feels well isolated.

In fact, you could drive this car reasonably long distances without issue; the fat, squidgy seat bolsters offer good support and the driving position is, on the whole, excellent. It’s a comfortable cabin; the newfound telescopic adjustment to the steering column and a broad scope of seat heights that mean you can either gaze out over the creased bonnet from up on high, or set yourself low enough for a scuttle-grazing view forward. 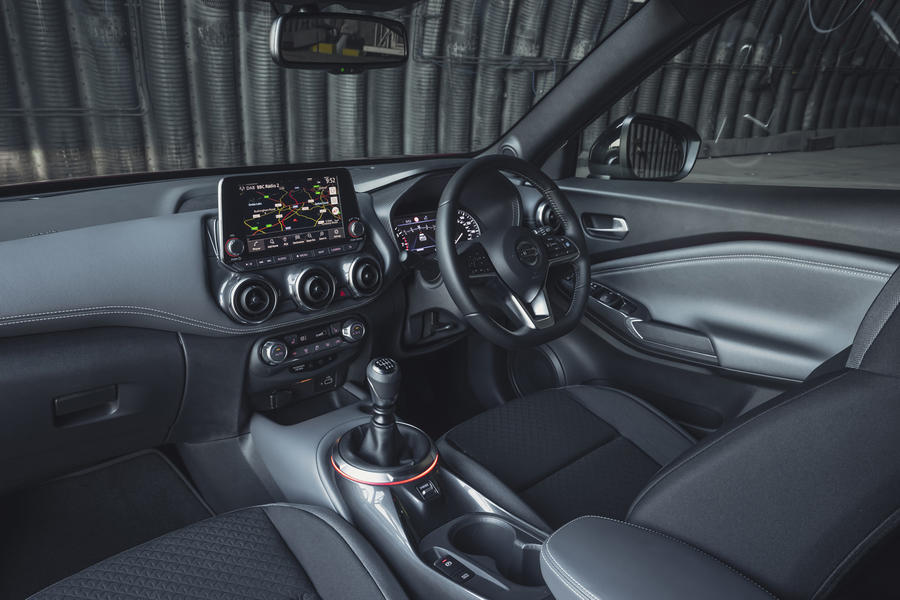 If you’ve decided a small crossover is your bag and you enjoy driving, you will like the Juke. The engine lacks much character and its efforts are modest, but for this tester the car’s steering and handling – two pillars of day-to-day driving satisfaction – are considerably better than average. Maintaining speed is fun and I can’t honestly say that of the Seat Arona, although the Spanish car should still be regarded as the most agile steer in this class.

The Juke’s interior represents another step forward; the longer wheelbase has translated into usefully more rear legroom and a larger boot, and while the motorcycle-inspired quirks of the original Juke are gone, plenty of soft-touch upholstery lifts the vibe considerably. It is a relief, however, that Apple CarPlay and Android Auto come free of charge, because even the sharpened graphics of the new 8.0in touchscreen can’t mitigate for the system’s slight latency and confusing menus.

So avoid, if you can, the largest wheels, and accept that the second-generation Juke, for all its improvements, doesn't change the game in terms of refinement, sophistication, ergonomics or even handling. Do that and you'll find it good company and, even if the looks don't set your world on fire, more likeable than most. 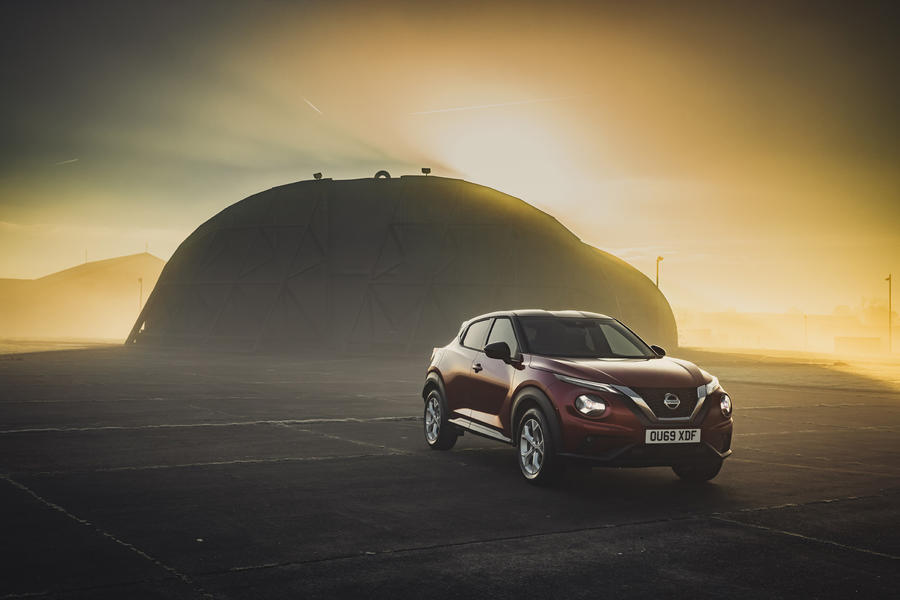 The last Juke came with a

The last Juke came with a broad range of engines that suited many different buyers - is that going to be the case with this one? The diesel seemed to be quite popular in the old one and arguably still has its place

Your implication that Females don't care or like to drive nice handling cars is fantastic. What are you a maniac?
James Dene 11 December 2019

You would judge another person, who you know nothing about and "cringe" just because of the fact that they drove a now previous gen Juke?. What of those people who borrowed a relations/friends car, hired one for the day, went a test drive and decided against it?.

You would judge another person, who you know nothing about and "cringe" just because of the fact that they drove a now previous gen Juke?. What of those people who borrowed a relations/friends car, hired one for the day, went a test drive and decided against it?.

You judge based on what is written in these comments.