Having been introduced four years ago, the third-generation ‘new Mini’ is due a facelift. Sales of the most popular hatch derivative reached a peak of 44,560 in the UK in 2015, but by last year that figured had fallen by 10%. Mini hopes a refreshed headlight design, tail-lights that incorporate a Union Flag motif, a handful of new wheel and colour options, piano-black (rather than chrome) trim and much more besides will help push those sales figures back up.

Outwardly, those curious rear lights - which might seem a touch crass in the UK but will probably work better on the continent and beyond - are the clearest markers of the updated model. Otherwise, this is one of the more subtle facelifts of recent memory. There is more going on within the cockpit and beneath the skin, however, with the high-quality cabin now available with a touchscreen as well as wireless phone-charging. 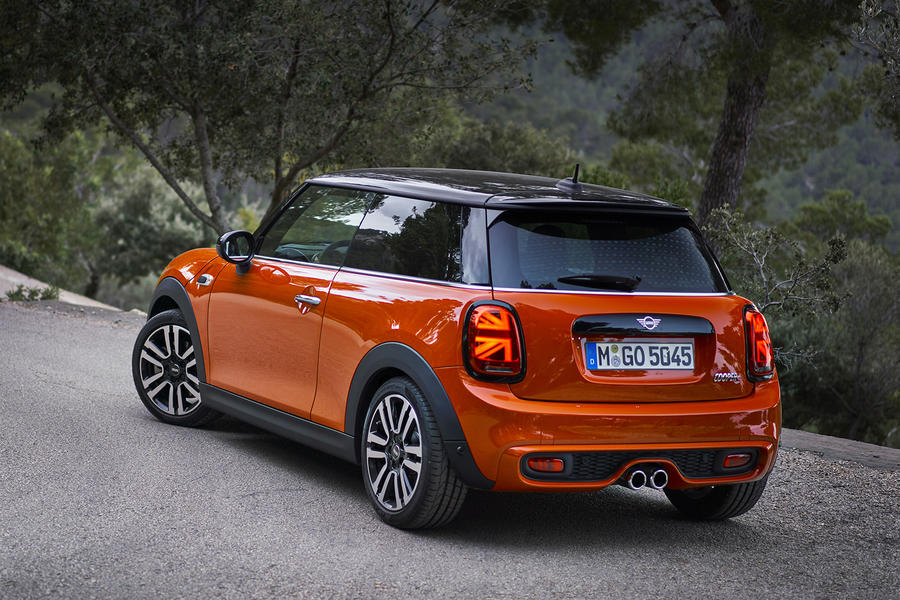 The new lights front and rear use LEDs, with very clever adaptive LED headlights now featuring on the options list. There are new personalisation options, too, including a number of 3D-printed parts that buyers can customise with their own name or simple graphics - a world first in the car industry.

The standard transmission on this Cooper S is a six-speed manual, but for the first time the two-pedal alternative is a seven-speed twin-clutch gearbox rather than a conventional auto. The revised four-cylinder turbo engine gets new, high-pressure injectors, a new exhaust system and a new turbocharger, too. Power and torque figures remain the same at 189bhp and 221lb ft, but fuel economy has improved by around 7%. Interestingly, the updated engine is said to be up to 30kg heavier than before; the suspension has been tweaked to account for that extra weight.

With each new version of the BMW-era Mini, the cutesy hatchback has swollen in size. It looks fuller and more bulbous than the 2001 original, and perhaps not as well-proportioned, but there’s no mistaking it for anything else.

The underlying dynamic character is broadly the same now as it was 17 years ago – bundles of agility, a darty front axle, mobile rear end - but this latest model actually feels quite different out on the road compared with that first version. There’s a soft, rubbery edge to all of the major controls, whereas earlier versions had crisp steering and slick gearshifts.

Soon enough, though, you get used to the stiction and springiness in the steering and the inconsistently weighted manual gearshift, and you get on with the important business of pedalling it along as quickly as you dare. Dynamically, nothing has really changed. You still feel the trademark Mini pivot the instant you turn in to a corner, sensing the outside rear corner scudding around slightly to keep the front end on a tight line. The steering is still quick and direct, and whatever work Mini’s engineers have done to disguise that extra weight over the front axle has been extremely effective.

For the first few miles, you feel perched high up on the seat. The way the car leans in bends gives the impression of it being quite tall, too, and of the track widths being very narrow. You find yourself wishing the car would squat down by an inch or two, whereas previous generations sat you so low to the road you worried you might scrape your own rear end on speed bumps.

Again, though, that impression does pass very quickly and when the bends come thick and fast you stop thinking about it entirely. Instead, you revel in the car’s agility and its eagerness to dart from one apex to the next. The familiar sense of the car yawing about its gearlever the moment you turn in to a corner is addictive. The Sport driving mode introduces too much dead weight to the steering, but otherwise the helm is accurate enough that you can place the car with real precision corner after corner. 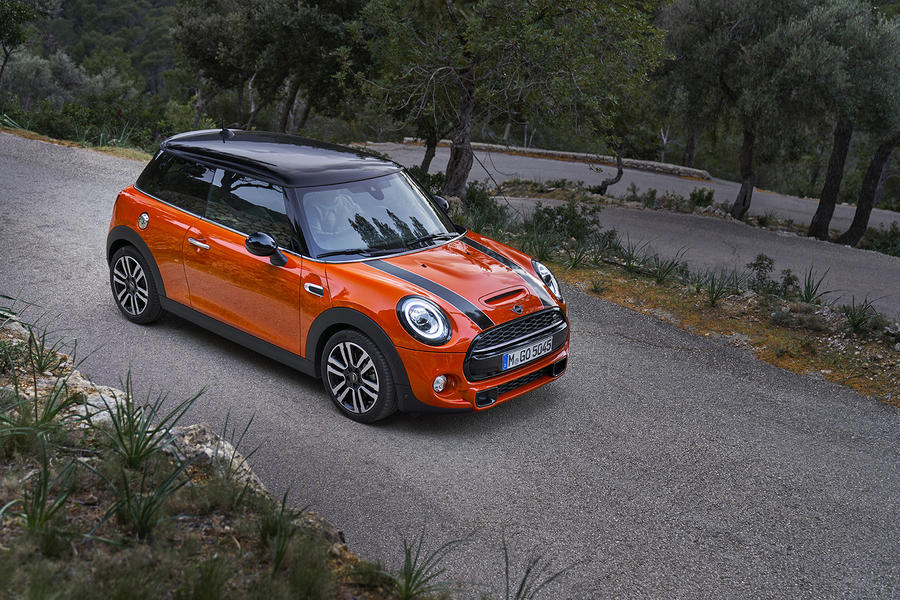 Our test car was fitted with Pirelli P Zero tyres. They were grippy in the dry and reasonably stable in hard cornering, although there are other high-performance tyres at this level that would deflect even less and bring yet more precision. It should also be noted that three other tyre options have been homologated for the Cooper S, one being the Michelin Primacy - a mid-range tyre that has no place on a hot hatch like this one.

Relatively firm springing and a shortish wheelbase cause the Cooper S to rock front to rear and bounce around on a rough road, like a small boat being tossed around in a storm. It isn’t exactly uncomfortable, but the ride is certainly busy. All things considered, however, the Cooper S is a brilliantly entertaining thing to thrash along a winding road. A mechanical limited-slip differential would help it claw itself out of bends more quickly and add a new dimension to the driving experience but, sadly, there’s no factory option.

The engine, meanwhile, is brawny and muscular, but it’s no rev-happy screamer. In fact, having started pulling hard from 2500rpm, it’s done its best work by 5500rpm, so you don’t chase the redline like you would in many other hot hatches. Out on the road, you find yourself holding onto higher gears and leaning on the slug of turbocharged torque instead.

Aside from that initial sense of sitting a little too high off the ground, the Cooper S is a hoot to drive in the finest quick-Mini tradition. What’s most impressive about it, though, is that it combines its willing and effervescent character with a refined, grown-up demeanour when you just want to get to where you’re going.

Other hot hatches at this price point - the Peugeot 208 GTi, for instance - are more sheer fun to drive, trading as they do some everyday refinement for single-minded, hard-edged thrills. But none of them matches the Cooper S’s broad spread of talents and none has a cabin that feels quite as high-end as this one.

The Cooper S might not be the best hot hatch at this money, but it could well be the best all-rounder. 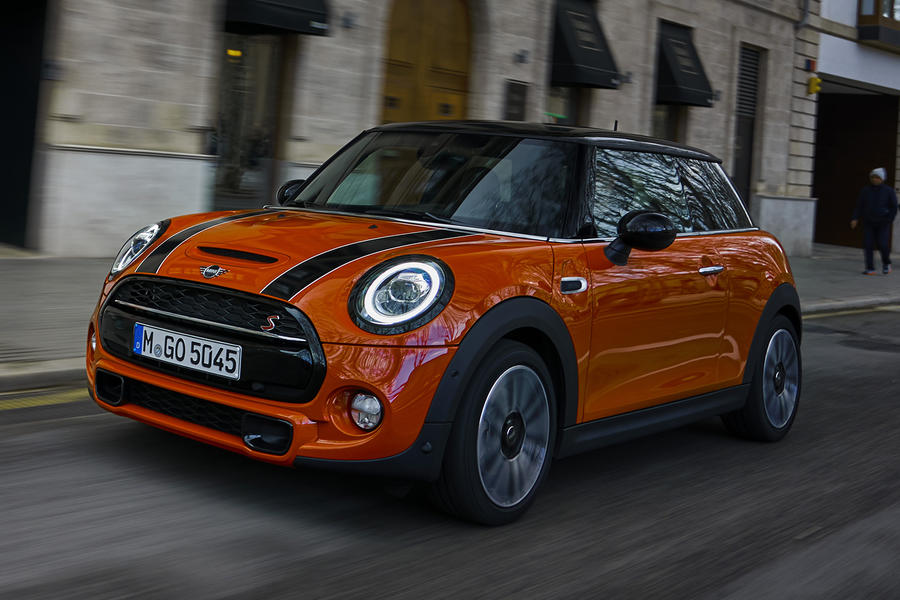 Agree with a lot of comments before, the Union Jack rear lights should have been on the options list, they look great, but are far too divisive. I like the improved design of the front lights though, feel more complete, and the black option to replace the chrome. Still feel the previous model that inspired the Coupé, Roadster and Clubman/Clubvan was prettier. Smile every time I open my front door and see my MINI Cooper Clubvan on the drive.

I quite like it and the tail lamps, though the review doesnt read like a 4 star review, many other cars have been hampered in reviews by feeling like you sit on not in irrespective of how well they handle and that bobbing around on uneven surfaces has also proved to be the downfall of many.

Are the lights optional?

It's a pretty good and interesting car in a sea of me-too boring superminis. I would delete the union jack lights option if I could.  At least there are no scoops and creases all over the bodywork.