From £35,2058
Latest E-Class hybrid attempts to offer best of both worlds, with claimed 30 miles of electric-only range
Open gallery
Close

How will history judge plug-in hybrids once the revolution is complete and we’re all driving zero-emission electric cars? Right now, it already feels they’re a half-way house for those who are motivated to join the EV era, but understandably don’t yet have the confidence in our charging infrastructure.

In other words, this latest hybrid Mercedes-Benz E-Class is a car for the here and now. We know where the future is taking us, but we’re not there yet – and a compromise is what’s needed. Does the c-word sound like a critical verdict? It’s not meant to. It’s just a reflection of the reality this car represents.

The E300e is powered by a 2.0-litre 4-cylinder petrol engine, plus an electric motor that when fully charged via a cable offers a standalone range of around 30 miles. Two cables are provided to charge from a standard three-pin socket in around five hours or via a 7.2kW charger in just an hour and 25 minutes.

There are four modes of operation to choose from: hybrid, E-Mode (electric only), E-Save (engine only) and Charge (engine only, but battery is charged). Some charge is also reclaimed by the powertrain as the driver lifts off, recycling energy to improve efficiency though a combination of (apparently) optimised gear changes and operating temperatures. All clever stuff.

Inside, the cabin offers the plush comfort one would expect of Mercedes' AMG Line status. On our test car, the black Artico/Dinamica upholstery was enhanced by attractive open-pore ash wood trim stretching across the dash and around the doors, in which stylish metallic Burmester speakers (for the optioned 590-watt sound system) catch the eye as well as the ear. Infotainment comes via a 12.3in colour display with Merc’s optioned Comand system operated by an easy-to-use control wheel.

The seats are figure-hugging but comfy, even if your girth is more ‘challenging’ than you’d like. The rear bench is ample in leg room, although strictly for two adults despite the provision of a middle seatbelt. 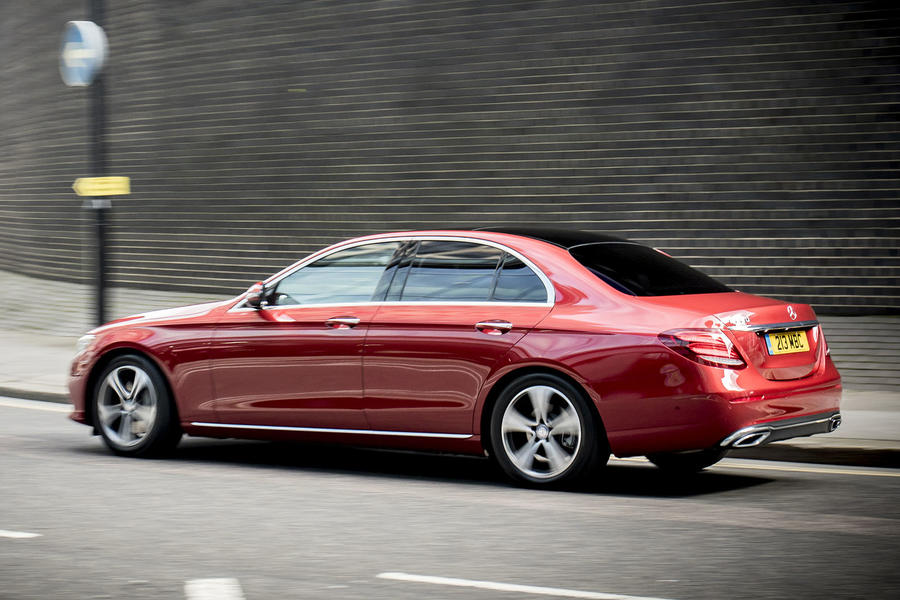 There’s little sign of compromise on motorways and A-roads, as the E300e offers the refined ride, aurally muted and smooth cruising one would expect of a premium car sold at a premium price. Push it into Sport+ mode and on a good old British B-road some of that composure is inevitably lost. It didn’t react well, bouncing through the ruts and disgruntling the passengers…

The interchange between engine power and hybrid assistance is seamless, again as you’d expect, while step-off is smooth and, when treated gently, almost silent. As the 0-62mph figure of 5.7sec suggests, acceleration is brisk, but it doesn’t particularly feel it, especially in Economy and Comfort mode. The extra weight of the electric motor and 7.2kW battery is surely a factor here, as it is if you choose to corner enthusiastically. Such is the inevitability of compromise.

Our test car's £1695 driving assistance package included active braking, distance, steering and speed limit assist, lane-changing and lane-keeping assist and more – but happily didn’t leave us ‘assisted out’. The car still allows you to drive it, and the safety features – surely welcome if transporting a family – avoided becoming invasive.

And economy? The still somewhat-fantastical WLTP figures of such cars give little relation to the real-world experience, but when efficiency is a key selling point, a real-world figure of 37mpg during a Saturday afternoon 90-minute family round-trip into Sussex might not be as frugal as you’d expect. 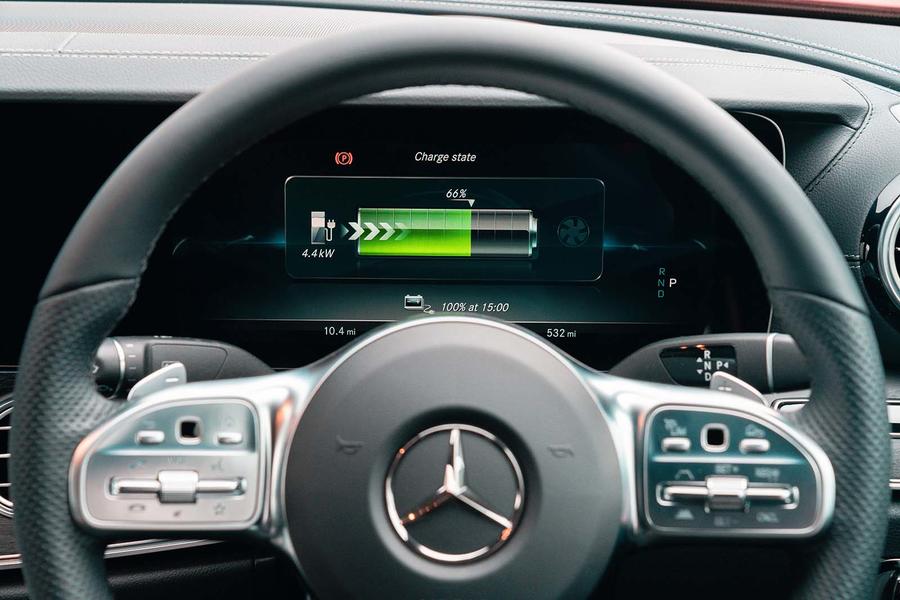 The question you find yourself asking about such cars is how often owners bother to plug them in to charge when it’s not a necessity. The answer probably comes down to why they bought it in the first place and for what purpose. If it’s to pound the motorways day to day, 30 miles of electric-only range is pretty irrelevant. But if your E-Class will be running errands around town and doing the school run, the EV transformation absolutely makes sense.

Notably, despite its obvious size, the E300e is easy to manoeuvre and park – and just as significantly it’s ULEZ-friendly: no emissions charge to you if you own one in central London, then.

Strange to think such a grand, executive cruiser should be judged as the perfect family-friendly city car. Compromise has its benefits after all. 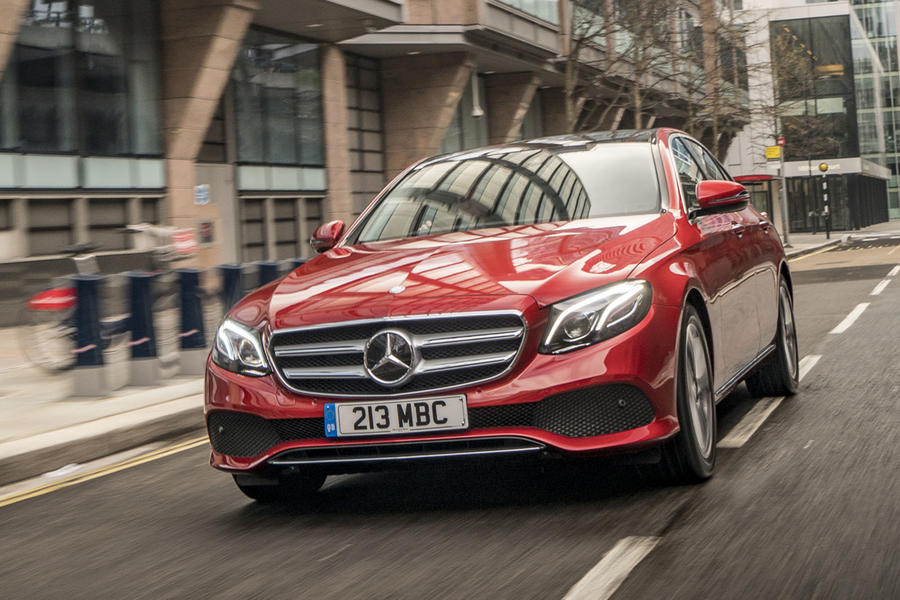 the mercedes-benz E300E  like how many E's do you want sounds like you have a stutter when you say it, but apart from that this seems like a good car, very good tech for one.

An issue here is that Merc’s

An issue here is that Merc’s four pot diesel is particularly good in this car, and way more economical (albeit you also need to fill it with adblue from time to time).

I have had over 15 cars, 13 of them have been petrol, i love petrol cars and the way they drive. My last 2 diesel cars have been a CLS 350d 3.0 - 270hp and a 2018 E220d estate with that incredible 2.0d that mercedes just released. It is a work of art, it runs very similar to a petrol, wide rev range of acceleration, heats up in seconds because of the new way they build their engines and uses NOTHING for fuel. I got 63mpg on a long road trip.  And the accelaration is literally inches away from my 2.5si 220hp BMW z4, i raced them side by side and it was shocking how the BMW barely pulled away from a 2 ton estate with a 4 banger diesel,

The new 2,0l Diesel has been claimned to be the engine that saves Mercedes and at this point, i do not doubt it. Couple that with a electric engine? that might just be my dream ccar.

Nothing agaisnt hybrids, but

Nothing agaisnt hybrids, but why dont the manufacturers make them so that the electric motor assists the ICE at times when its less efficient (pulling away, accelerating etc), that would bring real performance AND efficiency gains and would encourage more people to plug them in.

Who is this Damien Smith ?

Who is this Damien Smith ? And why is he talking about impossible things like "zero emission electric cars" ?