7
Boxy seven-seat SUV gets the AMG treatment. Does its blend of performance and practicality make a compelling case for your cash?
Open gallery
Close

When you think of Mercedes, what springs to mind? Luxury saloons? Convertibles? Coupés? Truth is the brand is famed for all of those things, but these days, its lifeblood is SUVs. I mean, it now has 11 of them on the books, as opposed to six saloons, four drop-tops and two coupés. Effectively, it lists almost twice as many off-roaders and crossovers as it does four-door family cars. That’s quite a thought.

The latest addition to its ranks of high-riding offerings is the Mercedes-AMG GLB 35, which on paper promises to be one of its most versatile. Not only does it claim to deliver the sort of speed and agility you expect from an AMG, but it also has the hardware to head as far off the beaten track as some of its more rugged cousins. Family-friendly versatility is also very much in evidence, as it touts a large boot and the ability to carry seven. And because it's at the more compact end of the firm’s SUV spectrum, it should be easy to live with and won’t cost the earth to run.

Under the slightly boxy and bluff-fronted exterior (it’s supposed to ape the iconic Mercedes-Benz G-Class), this AMG-fettled GLB takes many of its cues from the smaller Mercedes-Benz A35 hatchback and saloon. It uses the same turbocharged 2.0-litre four-cylinder engine that delivers 302bhp and a very useful 295lb ft, albeit at a surprisingly high 3000rpm. Like its lower-slung counterparts, the GLB mates this motor to an eight-speed automatic gearbox and 4Matic four-wheel drive system that can split the engine’s torque from 100% to the front wheels, 50% to each axle or anything in between.

Suspension changes run to bespoke steering knuckles and control arms, plus a stiffer subframe assembly. The multi-link rear axle gets stronger hubs that are designed to take higher lateral loads, while the springs and dampers are stiffer and adaptive dampers are standard. There’s also a new speed-sensitive electrically assisted steering and larger AMG brakes (350mm discs at the front and 330mm at the rear). What you don’t get is the Off Road Engineering Pack, so there’s no hill descent control or specific driver modes for coping with loose surfaces.

Visually, the GLB benefits from the usual AMG upgrades, including the gaping trademark Panamericana front grille, a deep front splitter, twin exit exhausts and a large tailgate spoiler. Multi-spoke 20in rims are standard (a 21in design available) and wrapped in the ubiquitous Michelin Pilot Super Sport 4S rubber.

Inside, the standard GLB cabin is garnished with the familiar AMG three-spoke multifunction wheel, some chunkier front seats and metal-finished pedals. 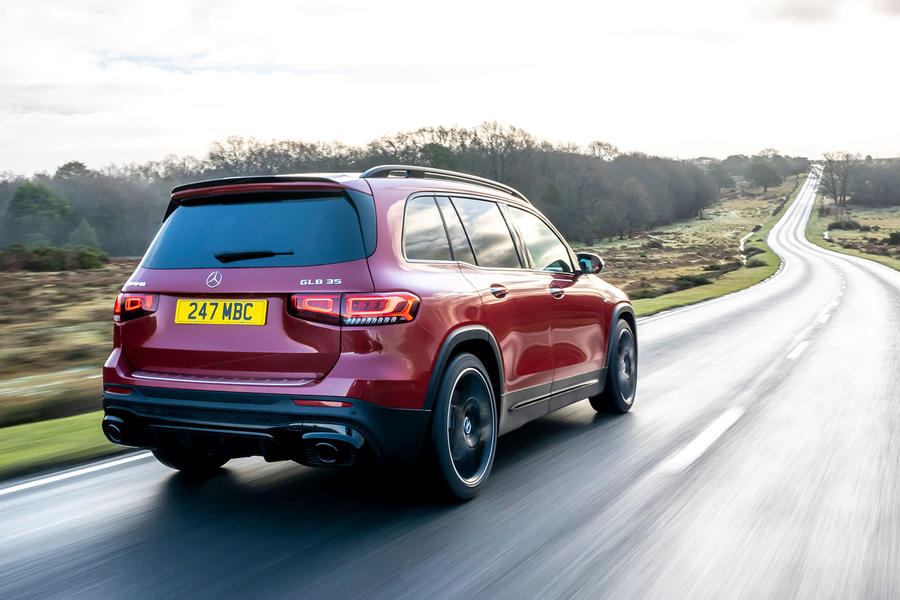 I know this model is styling itself as a performance car and so we should be tucking straight into the performance and dynamics, but it’s worth taking a moment to consider the GLB’s cabin. Mercedes really is at the top of its game at the moment and the interior of this seven-seat SUV gives very little away in upmarket allure to the brand’s luxurious Mercedes-Benz S-Class. Sure, there are some cheap plastics lower down, but from the glossy panoramic infotainment screen and TFT instrument cluster through to the metal-finished minor switchgear, the Merc looks and feels a cut above. It’s even more beguiling at night, when the ambient lighting extends to those eye-ball air vents, backlighting them in any one of numerous colours. The feel-good factor is high.

On the move, the first thing you’ll notice is the GLB’s impressive rolling refinement. Many souped-up SUVs suffer from a brittle and crashy ride, a corollary of the overly stiff springs needed to check the sort of roll angles encountered in something with such a high centre of gravity. Yet even on its 20in alloys, the Merc rides well, with the edges of an underlying firmness nicely rounded off by the adaptive dampers in their Comfort setting.

Push on a bit and delve into the near-limitless options offered by the AMG Dynamic Select driver modes and you’ll discover that the GLB mostly lives up to its on-paper promise. With the suspension and throttle in their sportiest settings, the Mercedes delivers strong composure and grip, resisting push-wide understeer and significant body roll despite a not inconsiderable 1770kg kerb weight. Four-wheel-drive traction also inspires confidence, with the Merc able to deploy all its power even in damp and greasy conditions.

It’s not an expressive car, with little or no mid-corner adjustability, but its ability to stay locked to your chosen line means it's a faithful companion. It’s quick across the ground, too, the raised driving position and large glass area affording you a view of unfamiliar roads that lower-set hatchbacks deny you. It’s not fun exactly, but the GLB can pick apart twisting and unpredictable British B-roads with a surprising turn of speed.

So it’s a shame the steering spoils an otherwise capable machine, with the AMG-specific Direct-Steer set-up robbing the car of some precision and poise. It responds quickly to your initial inputs, but the weighting is light and inconsistent, with very little feedback. There’s also a vagueness off the straight-ahead that makes it hard to pick an accurate line through slower corners in particular.

As in its other applications, the turbocharged 2.0-litre gets the job done with impressive efficiency and smoothness, albeit without anything much in the way of character. A 0-62mph sprint of 5.2sec isn’t exactly slow, but the car never feels quite as fast as the numbers suggest. The engine is tractable and torquey enough low down, but it needs to be worked hard to give its best, while the muted exhaust growl lacks the aural drama of larger-capacity AMG motors. Still, the eight-speed automatic rattles through the gears quickly and crisply when you use the paddles and it's slick and smooth when left to its own devices. 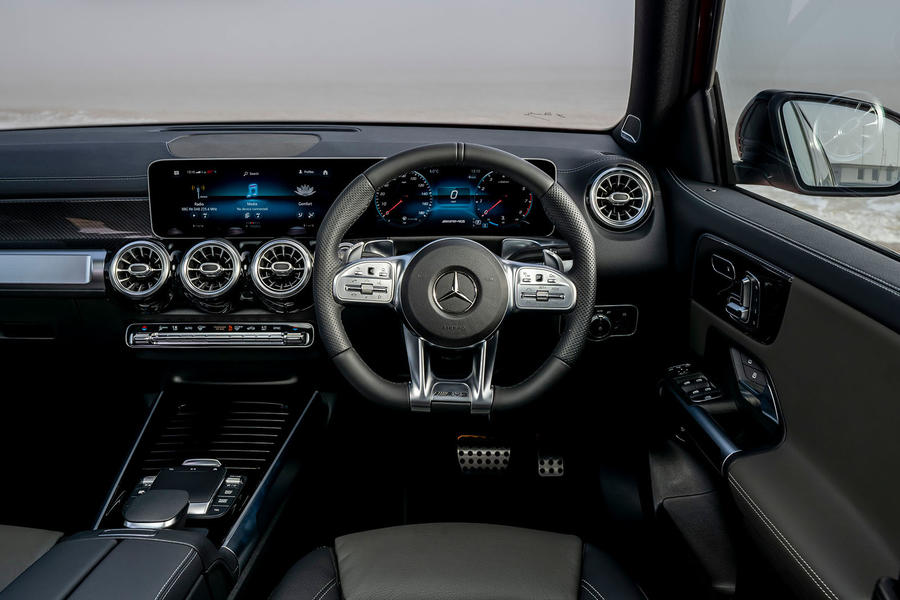 Given its tall and heavy SUV origins, the Mercedes is a surprisingly capable cross-country companion. Frustrating steering aside, it can pick apart roller-coaster stretches of Tarmac with impressive pace and composure. It’s not engaging or entertaining in a traditional sense, but there’s enough pace and poise here to frighten the occasional well-driven hot hatch.

The car's USP, however, is that it combines this speed and agility with a decent dose of family-friendly practicality. Yes, those third-row seats are a bit of a bind to access, and for anything other than short journeys, they’re best left to the kids, but they do add a useful dollop of versatility. And the rest of the cabin is spacious enough, filled with handy cubbies and, as mentioned, supremely well finished. The fact that it's quiet and comfy enough only adds to its appeal.

At £51,660, this model has a hefty price, but for that you get the works, including a Burmester sound system, panoramic roof, leather trim and matrix LED headlights to name just a few extras. It also sits in a class of one, meaning that if you want a relatively compact seven-seat SUV with at least 300bhp, then this is it. It’s not the last word in driver involvement but, steering aside, it’s one of the better quick SUVs. However, if you can live with just five seats, then there are a number of cheaper and sharper fast estate cars that would likely be a better bet. 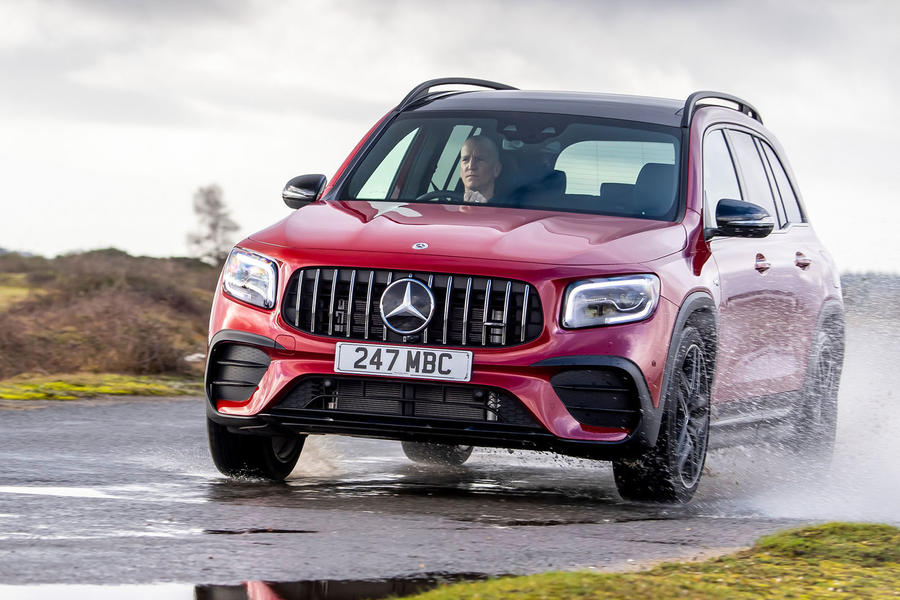 I like this in so many ways. It is completely unnecessary, but glad it exists. The Disco Sport P290, although not as fast, or focused on the "sport" element, is probably a good rival in terms of seating/power output/price

Nearly £52k for a car with a poxy 4 cylinder engine. Not for me thanks!

That dashboard is a mess, and the comment that this car has off-road abulity ..... not on 40 profile rubber it doesnt!

Not for me thanks, and the comment that this car has off-road abulity ..... not on 40 profile rubber it doesnt!

Precisely, plus the lack of electronic aids such as hill descent. A normal 2wd drive car with appropriate tyres would laugh at this "4x4" in winter conditions.

Yet another boxy Mercedes with all corners rounded off and so loses all definition.

Those fake airvents below the lights only add to the impression of cheapness and lack of integrity.

While BMW's styling receives almost universion derision for trying too hard, it is Mercedes's totally unimaginative approach (not trying at all) that is even more problematic.