The Audi RS Q8 hasn’t been officially unveiled yet, but already it’s a record breaker. Packing 592bhp, the high-riding, high-performance flagship has smashed the SUV lap record at Germany’s fearsome Nürburgring with a time of 7min 42.253sec – 12 seconds quicker than the previous benchmark set by the Mercedes-AMG GLC 63 S.

UPDATED: The Audi RS Q8 has been officially revealed at the LA motor show - read the full story here

The SQ8’s air suspension and 48V anti-roll bars are carried over, but software tweaks mean the spring rates are up to 10% stiffer and the adaptive dampers can be around 15% firmer. Also used is the four-wheel steering setup, plus the torque-vectoring Sport rear differential.

However, extensive work has also been put into the bespoke Pirelli P Zero tyres, which run to 295/35 ZR 23 in their largest guise on the RS Q8.

“We wanted the RS Q8 to be able to deliver on the track, but also be usable every day,” said Victor Underberg, Audi Sport’s head of development. “We needed a tyre that’s quiet, comfortable and can cope with all sorts of weather but has the performance to deliver a strong lap time. With this tyre, we have achieved our targets.” 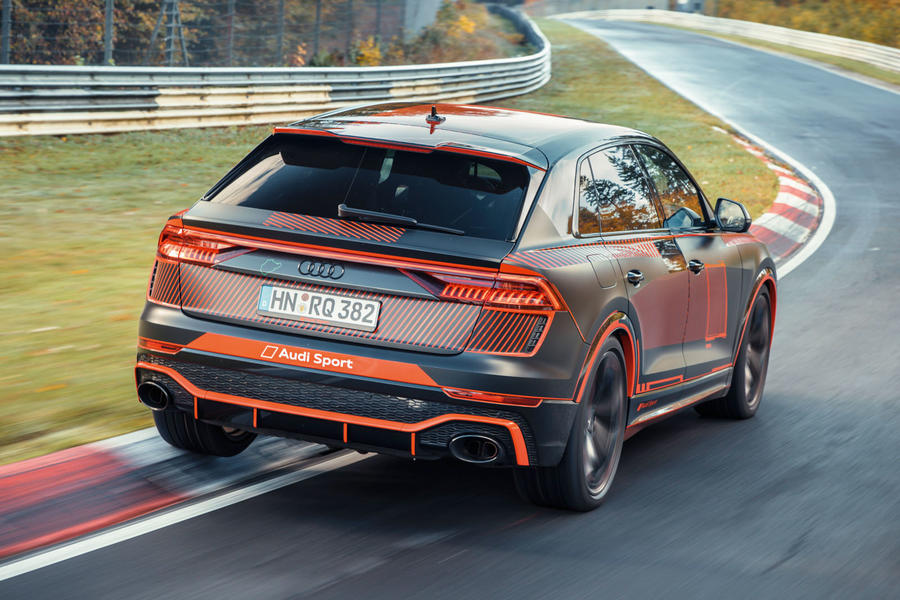 Structurally and externally, little has changed, with the engineers keen to stress that despite its performance and capability, the RS Q8 is a daily-usable series-production vehicle, and apart from those vast 23in wheel options, the only other noticeable updates are the carbonfibre trim around the revised front grille and lower bumper, plus the rear diffuser with its RS-trademark twin oval exhausts.

In the build-up to the RS Q8’s official launch later this month, Autocar was given exclusive behind-the-scenes access and granted a high-speed passenger ride around the ’Ring.

Audi factory ace Frank Stippler is not hanging about. We’ve got one hot lap of the Nürburgring and damp but drying conditions similar to those during his record-breaking run. (Had it been dry, Stippler reckons, there were another four or five seconds on the table.)

Obviously, we can’t truly get a handle on what the car’s doing when riding shotgun, but there’s enough feel through the seat of the pants to suggest the RS Q8 is hugely capable.

The relentless acceleration is a given, and looking at the telemetry later reveals there’s even enough grunt through the 180mph kink of Döttinger Höhe to spin a lightly unloaded inside rear wheel. The optional carbon-ceramic brakes work well, too, tirelessly hauling the car down from big speeds – although on a lap that’s 80% full throttle, they’re not worked as hard as they could be.

No, what’s surprising is the Audi’s agility. Where you’d expect plough-on understeer and extreme body roll, the RS Q8 takes a neutral and flat stance. If anything, the balance in these conditions is more towards oversteer. You can feel the rear-wheel steering pointing the nose into the apex in slower turns and the trick diff allows Stippler to get early on the throttle at the exit to get the rear rotating for a quicker exit. 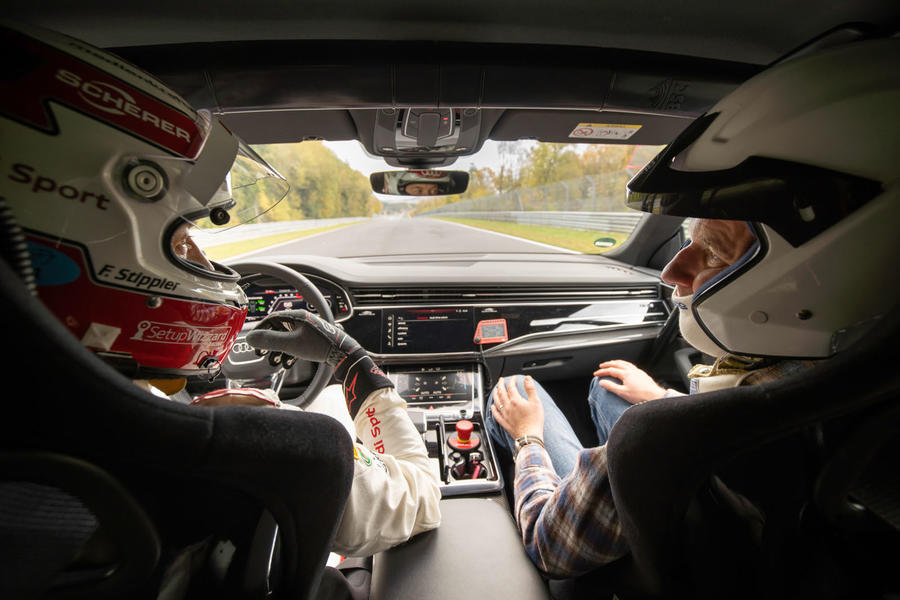 Tellingly, we’re in the Auto driving mode. “When it’s a little slippy like this, then in Dynamic with stability disengaged, we’d have oversteer all the way from entrance to exit,” says Stippler with a smile.

Rapid changes of direction are no problem for the RS Q8, yet despite the roll stiffness, the trick suspension can still deliver enough compliance to ride the big kerbs with real suppleness.

Inside, the most obvious tweak is the inclusion of RS-specific displays for the TFT instrument cluster, but with its roll-cage, race seats and discarded rear bench, the interior we saw was in all other ways unrepresentative.

It’s truly impressive, and while we’ll have to wait for our turn behind the wheel (and in a car with rear seats) to deliver a proper verdict, we’ve learned enough to know that Porsche won’t have it all its own way in the battle for high-performance SUV supremacy.

I utterly love cars.  I

I utterly love cars.  I always have.  But if somebody offered me the keys to this for a day, I would certainly decline.

It doesn't appeal to a single aspect of what I look for in a car.  It is a repulsive mixture of cold, wasteful and humourless.

Seeing pictures of this thing tooling around the 'ring, it is no wonder that cars are dying, as they certainly are.

This will kill the private car...

As much as the petrol head in me loves this crazy beast, it will be cars like this which the anti-car brigade will latch onto and use to drive an anti personal transport agenda.  Sadly.

An SUV for the Nurburgring?

The arrogant, egotistical and pompous wankerati that flock to Audi will love it.

The arrogant, egotistical and pompous wankerati that flock to Audi will love it.

Actually if there was an SUV from VW group designed to break ring records you'd expect it to come from Porsche.

si73 However they dress it up

si73 However they dress it up, It's all the bloody same, isn't it?