When the current Mercedes-AMG C63 was introduced in 2015, the car had more power than any of its direct super saloon rivals. More torque, too, and it was the only car of its kind with a V8 engine.

Fast-forward three years and, despite plenty of activity in the C63’s model niche (and ignoring the similarly priced but soon-to-be-discontinued Lexus GS-F and left-hand-drive-only Cadillac CTS-V), it can still make outright claim to two-out-of-three of those titles and assert shared ownership of the third. This mid-life facelifted version of the car certainly didn’t need any more grunt. For the record, neither has it got any.

What is new is to be found slightly further downstream of the 4.0-litre ‘hot vee’, where the old C63’s seven-speed torque converter automatic gearbox has been chucked out and a new nine-speed 'box (featuring a wet start-up clutch instead of a torque converter) has moved in. Further downstream still, AMG has junked the mechanical slippy diff of the lower-powered C63, fitting instead the torque-vectoring ‘eDiff’ (formerly the preserve of the ‘S’ models) to both C63 derivatives.

There’s a new multi-modal brake-based torque vectoring set-up on the car called AMG Dynamics, as well as a nine-stage traction control system which will be familiar to owners of the Mercedes-AMG GT-R. The car’s suspension and steering systems have been subject to a few gentle tweaks, too.

If you want the full-fat AMG experience in your C-Class, however, only the C63 S gives you the car in its most purposeful specification: with the dynamic engine mounts that, AMG claims, have such a big influence on handling precision; a new design of 19in wheel; GPS track telemetry; AMG Performance seats and a top speed increase from 155 to 180mph. Likewise, you only get that new traction control set-up as standard on a 'C63 S – and that’s true whether you plump for a saloon, estate, coupé or cabriolet.

Ah yes, the body styles. None of the C63’s rivals offer so much choice on those, which seems to me another sizeable advantage for a driver’s car that, as we’ve already covered, isn’t short on selling points. Mercedes UK sells more C63 coupés than anything else and when you look over all four derivatives in the pitlane of a German circuit, it’s easy to see why that might be. The coupé’s a low-slung, swollen-arched, beautifully curvaceous car, and it’s available with an aerodynamic styling kit that takes its visual appeal even further beyond that of its siblings. It’s also got wider tracks, wider wheels, a lower body profile and firmer suspension tuning than the saloon – although, interestingly, it’s 65kg heavier than the four-door.

We drove both C63 S saloon and coupé and actually preferred the former, for reasons we’ll come to.

On the inside, the revised C63 gets digital instruments and Mercedes’ latest Comand infotainment system. There’s an updated steering wheel design to go with it. The new wheel is well-shaped; more sculpted around the grips and less flat-bottomed than the old one was. You can have it upholstered in nappa leather or ‘dinamica’ suede, with gloss black or carbonfibre trim. And it comes complete with those handy thumbpad controllers which we’ve rated highly when encountering them on the latest S-Class, E-Class, A-Class and others.

Here they’re accompanied by a trio of new AMG-specific controls fitted into the lower orbits of the steering wheel; a new rotary knob bottom on the right to select your chosen drive mode (or, in ESP-off mode, your chosen traction control level) and a couple of toggle buttons placed conveniently for your left thumb whose function can be set (exhaust mode, gearbox mode, etc) according to your own preference. The car’s cabin remains a fantastic advert for it, and Mercedes’ digital instruments are just the tech-rich tonic it needed to maintain a lead over its competitors for luxury ambience and perceived quality.

There’s another rather good advert for the C63 S saloon under the bonnet: a throbbing Rickenbacker of a V8 whose bassy thrug would take an awfully long time to go sour on your eardrums. It responds so crisply and revs so evenly and keenly that you’d never guess it was turbocharged, either.

That’s not accounting for the torque, of course. Only turbocharging could produce such a swell of mid-range urge as the C63 S can summon up. Between that and the silken savagery on tap at the top end of the engine’s rev range, this AMG’s stature as the true hot-rod of its class is utterly beyond question. Want the best engine available in a sub-£80k fast four-door? The C63 S is what you buy. I will brook no argument on the subject.

Does Mercedes’ new nine-speed gearbox bring more of the brilliance of that V8 to bear than the old seven-speeder managed, though? It depends how you drive. Shift speed and quality has certainly improved in the car’s sportier driving programs, and if you treat an empty winding A-road as invitation to dial up ‘manual’ mode, effectively retiring every ratio above fifth, you can easily convince yourself that some decent progress has been made. There’s certainly nothing wrong with the way the gearbox copes with hard track use, or the urgency with which it can batter its way down through the intermediate ratios when you want it to.

Where the transmission struggles to convince is at that middling ground-covering pace, when left to juggle ratios by itself. Even in Sport and Sport+ driving modes it tends to upshift too far by a gear or two, and simply gives itself too much to do to find the perfect ratio for the bend or overtake you’re lining up, making responses to bigger accelerator applications seem just a touch clumsy and slow. That is true, mind you, not only of the C63 S’s gearbox but also just about every other eight, nine or ten-speed modern automatic gearbox you could mention, so we won’t dwell on it.

Affalterbach isn’t shouting too loudly about the suspension revisions it has made to the C63, I suspect for strategic reasons. If it was widely known that the firm had allowed its 503bhp thunder-saloon to go slightly soft in advancing age, perhaps some people wouldn’t buy one. But the truth is, a dose of dynamic realism hasn’t harmed the C63 one jot.

The car wasn’t actually the firmest, sharpest or dartiest of handlers before, and the change has been sufficiently subtly executed that few moving from the old C63 to the new one will even notice it. But the signs are there. You can now use Sport and Sport+ driving modes on the road, allowing for the firmer damping they impose, without any unpalatable compromise on bump absorption or ride composure. I’d say the C63 S has certainly become a better fast road car as a result.

It steers with perfectly judged, intuitive pace and weight, just as the last one did. It doesn’t have Giulia Quadrifoglio-level agility or body control, rolling a touch more heavily when cornering hard than some might like. But does it ever handle sweetly. It stays composed over bumps and grips more than hard enough to take its ambitions as a precision instrument really seriously. But then, with the aids deactivated, it slips so progressively into power-oversteer that’s so wonderfully, addictively controllable and benign that you feel like bathing in it.

This is the kind of oversteer you don’t just ride out, but grab another gear as it develops just to prolong the indulgence. And now, if you want to tap into just a bit of that oversteer but leave a distant electronic safety net in place to help tidy things up when your exuberance gets the better of you, go ahead sir; that’s the difference that new traction control system makes. In its most dialled-down settings ('9’ is off, and I liked ‘7’ and ‘8’ best), it’s a hugely permissive but still reassuring presence. 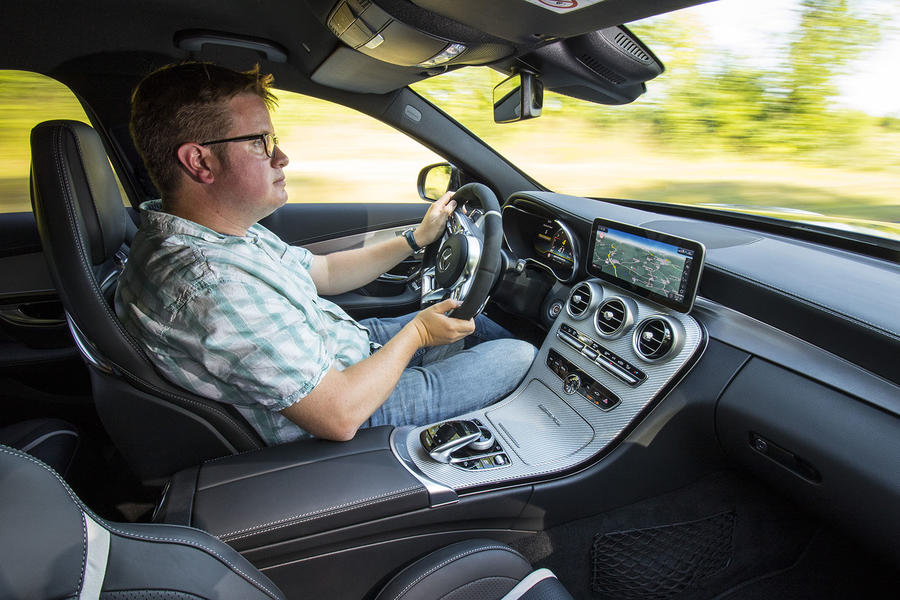 Honestly, although the C63 S Coupé has flatter body control, quicker responses and better outright lateral adhesion than the saloon, it doesn’t have the same delicious grunt-over-grip hot-rod character and, perhaps because it presents more tyre contact patch at the rear axle and has that wider, firmer tread, it doesn’t slip into endless drifts quite as willingly or mildly when the chance arises.

For that reason, and also because I think it’s a more classic look, I’d definitely have the four-door. I’d have it over any of its German, Italian, Japanese or American rivals. And I’d also treasure it as a delicious steel-sprung, rear-driven Mercedes-AMG ‘bahn-stormer – and hope very much that Affalterbach goes on making cars just like it for a long time yet. 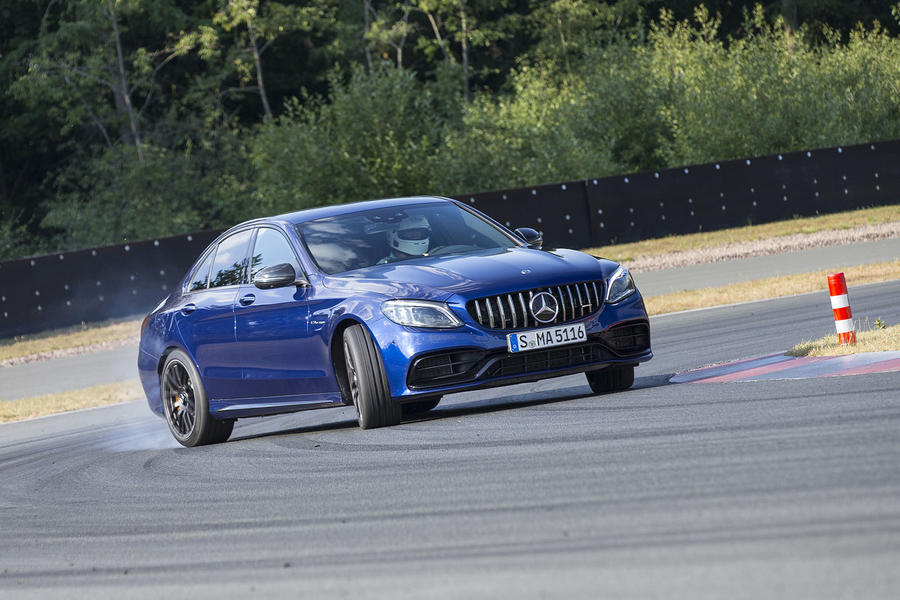 Or learn to spell.

As it seems clear that you are doing no such thing, what reason do you have to whinge?.

I think I'd have a previous generation Cadillac - bigger engine, manual gear box - in a perfect world. Nevertheless, this Benz is bitching and no way would I kick one out of bed!
View all comments (4)