Mercedes continues to deliver the motoring equivalent of a chocolate selection box with its hottest C Class: there’s something on offer for all tastes, whether they be saloon, coupé, convertible or estate-shaped.

While all have the performance punch of a carolina reaper chilli pepper, only the estate delivers that hit with a side of sensibility. It’s the sensible choice in a niche where sensible rarely applies anywhere else.

A handful of visual changes for 2019 include a revised AMG front grille and rear diffuser, some new-look air inlets and new alloy wheel options, but you’d need to be paying attention to notice.

Digital instruments and a slimmer, updated steering wheel are the main additions inside the cabin, with an AMG-specific rotary dial and customisable shortcut keys with their own tiny LCD screens to show whether you’re sharpening up the gearbox response or switching off the traction control.

The mid-life facelift hasn’t added any more power - but it wasn’t like the C63 S needed any. The 503bhp produced by its twin-turbo 4.0-litre V8 is sufficient for a mere 4.1 second 0-62mph sprint and a 172mph top speed. It does benefit from a new nine-speed wet clutch automatic gearbox, which replaces the seven-speed torque converter found in the outgoing car. 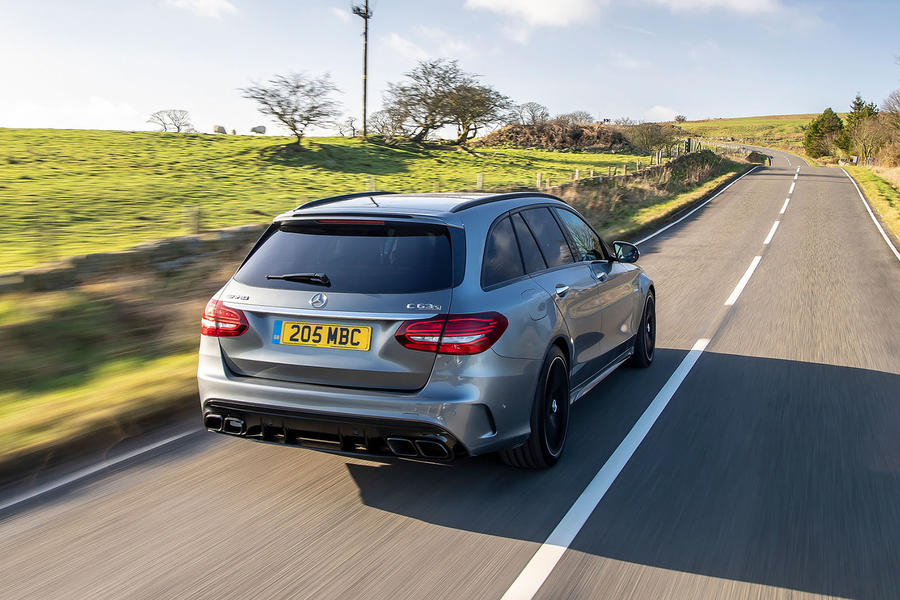 This latest C63 isn’t quite as rabid as previous AMG estates. Where older cars would have happily let the driver exceed their abilities in spectacular fashion, the eminently adjustable traction control system poached from the AMG GT supercar helps reign things in until you decide to turn down the level of hand-holding. It turns in with precision and is supremely agile, though perhaps not to the level of BMW’s best M Division cars.

It’s still eager to oversteer and willing to break traction with anything close to liberal application of the throttle should you want it to, but is now much more predictable once you go beyond the limit. There are nine levels of assistance to choose from, in addition to the five driving modes that can be hot-swapped using the rotary digital dial fixed to the steering wheel. It’s slick, but the sheer amount of configuration and customisation on offer feels distinctly unlike AMG.

While it rides towards firm, as you would expect, the C63 isn’t as unforgiving as it used to be. The more dynamic driving modes are usable on the road now, without also making every bump and road imperfection felt through the cabin.

The new gearbox is far more keen to change cogs than the old car, and now won’t wrestle upshift duties from you in manual mode, but does have a habit of upshifting a gear or two too far when left to its own devices. It’s noticeable even in the sportier driving modes, and can feel just that little bit unresponsive when you’re preparing for an overtake or a fast corner.

In a straight line, the C63 is a delightfully thuggish hot rod wagon with the kind of accelerative force that will make passengers cling, white-knuckled, to the grab handles. Under full throttle you are pinned into the sports seats with eye-widening levels or torque as the engine emits a gutteral V8 roar. It’s addictive long before you discover the active exhaust button is practically capable of drowning out a thunderstorm.

That a car capable of such raucous noise is also able to transport a flat-pack wardrobe with ease is the crux of the appeal of the hot estate. The C63’s boot space isn’t all that much bigger than the saloon, but a lower loading lip and flat-folding rear seats make it naturally more adept at moving large loads. 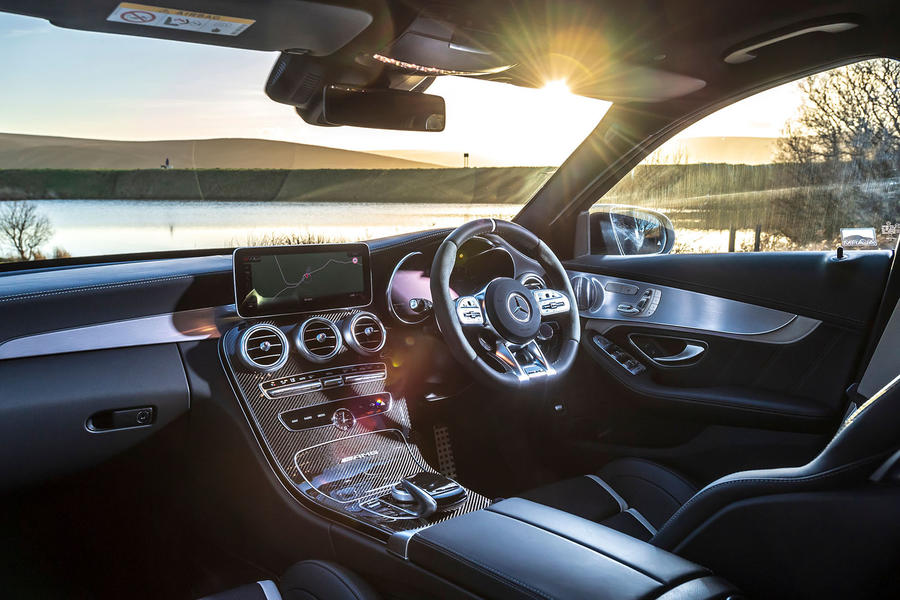 Cars that can match the C63’s performance figures are numerous, but few can also claim to have it beat in practical terms. The Estate is every bit the super saloon when you want it to be, and when required can deliver plentiful load space.

It’s marginally heavier than the C63 saloon, but just as controllable, and with an engine note that’s every bit as addictive. The bodystyle is arguably that bit more subtle, too, until you bury your foot and announce your presence to the whole county.

Compact fast estates are few and far between, leaving the C63 with only one direct rival. Audi’s RS4 Avant has a more refined and generally less cluttered interior, but it has nowhere near the same level of character, or the sheer ability to entertain. 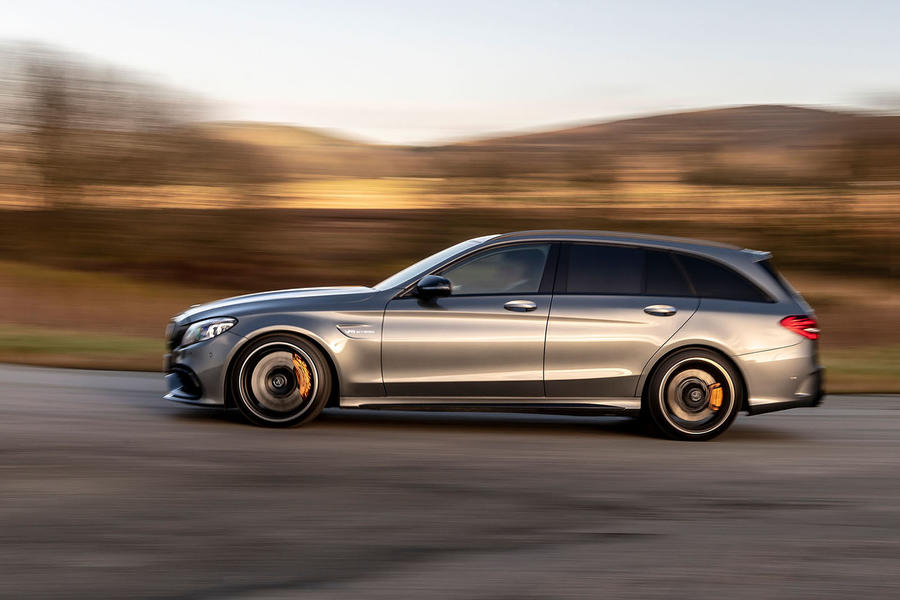 9 levels of assistance and 5

9 levels of assistance and 5 driving modes? What a load of bloody nonsense. I loathe this.

Set it up properly in the first place. That is what we pay them to do. And traction control on or off.

I have a 2007 AMG. In manual mode the gearbox (proper auto, 7 speed) does exactly as commanded in manual. And is sensible in auto. Where is the progress?

Where is the progress indeed. For the likes of you and me its hard to find. My 19yr old son however is primarily interested in the latest Golf GTI's connectivity versus his 'old' one. He likes the very things that annoy you and I, he likes multiple driving modes (menu options just like all his electronic devices have). As an acknowledged Porsche guy, I love my 2016 GT4, but even that has crap I don't care for (navigation, radio, electric windows etc). There are very, very few new cars I prefer over old. Hope they don't spoil this years GT4.

Hi - if Mercedes had originally given your car multiple modes then a few years later said "We're taking the modes away and just giving you our one setting, for all roads and all conditions" would you consider that an improvement?

Love the idea get one while you can

But this is nearly 80k optioned for a C class. Dare I say it makes the older ones look like a bargain same big silly motors.

But this is nearly 80k optioned for a C class. Dare I say it makes the older ones look like a bargain same big silly motors.

Agree with that jer, especially given how much coin these things lose after a couple of years.