Conquering the compact executive saloon segment is the ultimate litmus test for a premium manufacturer. Not because it’s the most prestigious or exclusive class, but simply because the level of competition is so fierce. For if you can defeat competitors such as the Jaguar XE, BMW 3-Series and Audi A4, not only do you gain a rolling mass-produced advert of your technological prowess, but you also secure the loyalty of first-time premium car buyers.

Yet, despite entering the UK market back in 1999 with its innovative IS, Lexus has struggled to make anything other than the faintest impression on mid-level buyers; a situation the third-generation car categorically failed to rectify. Coming without the option of a diesel engine, Lexus pitched the 2013 IS as a sporting, albeit economical (in Hybrid form at least) alternative to a sporting business saloon. Shame then, that in reality, it performed neither role convincingly.

But that’s not to say we don’t like the IS. Far from it. In terms of interior quality, appealing design and remarkable refinement, it still has the majority of the German opposition beat. Therefore, for 2017, Lexus has decided to build on what we already like – namely, exceptional craftsmanship and functional interior design – and to rectify what we don’t – poor ride quality and a lack of driver involvement. 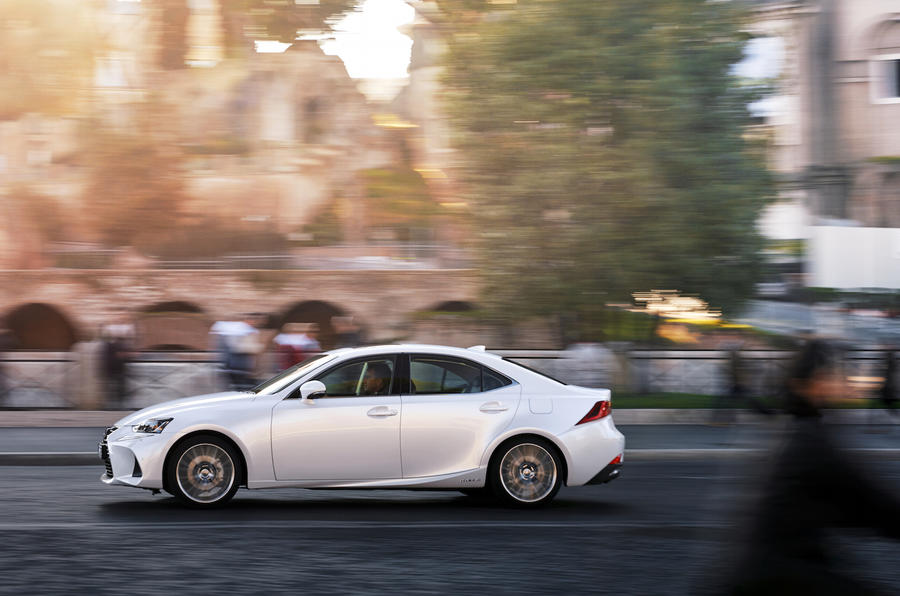 It’s no surprise, then, that the external styling changes to this facelifted IS are minor, with new front and rear headlights, larger air intakes and an evolved version of Lexus's spindle grille, simply enhancing what was already a handsome and cohesive design. The cabin, too, looks suspiciously similar to last year’s model, which is no bad thing. We’ve always been fond of the IS’s clean yet functional interior.

Instead, Lexus has dedicated most of its time to perfecting its frustrating infotainment system. The centrally mounted screen has significantly increased in size, from seven to 10.3in, and the high-resolution monitor now functions as a split-screen, so that different information displays can be presented simultaneously. The controversial Remote Touch Interface has also been re-worked and in-car WiFi is now offered as an option.

Dynamically, the updated IS should also feel sharper than the car it replaces thanks to stiffer anti-roll bars, tweaked dampers and new electric power steering settings. Yet Lexus claims these changes have had no impact on ride quality.

Much has been said over the years about the quality of Lexus interiors, and it only takes a brief stint behind the wheel of the new IS to understand why. The perforated leather in our test car felt plush, the new stitching lining the instrument binnacle was perfectly seamed and the laser-etched dark wood trim inserts were simply exquisite. And yet, despite the impressive attention to detail, it’s hard to ignore that the overall design of the cabin is starting to feel its age.

The audio and ventilation control panel has been adjusted so that it now sits neatly between the knee bolsters, and it looks far more cohesive as a result. But the temperature control LCD panel that it houses looks a bit 1980s, and the new ‘shortcut’ enter button for the revised HMI system comes across as nothing more than an afterthought. In fact, it’s hard to comprehend why Lexus has continued to persevere with its mouse-style controller, when both BMW’s and Audi’s rotary controlled systems are faster and more intuitive to use. 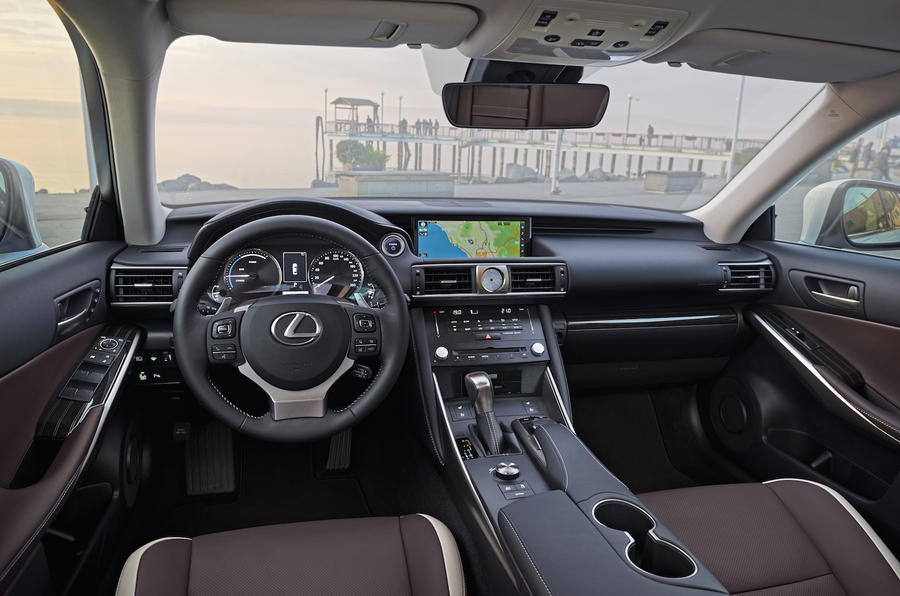 Lexus’s decision to stick with its current technology continues to irk when it comes to the driving experience. Silent on battery power and whisper quiet with the combustion engine running at low revs, the IS300h still delivers one of the most refined low-speed experiences in the class. However, once you leave the city, and get onto fast and flowing country roads, the CVT gearbox stills remains a limiting factor.

Flex your right foot and you’re met with a flare of revs, but little else. It seems that even in manual mode - which locks up to give you closer control of your speed – the ‘box continues to slip, resulting in the sensation of being in the wrong gear when exiting tight corners. And despite having around 220bhp of ‘system horsepower’, you never feel like you’re getting the whole amount, even with your foot buried deep in the firewall.

Not all is lost, however, as Lexus’s efforts to tighten up the IS’s handling has resulted in noticeable gains. Where the old car’s steering felt rather numb off centre, the revised system feels more direct, allowing you to place the front-end accurately on the road. Granted, it’s not going to keep BMW engineers awake at night, but the chassis certainly provides a level of feedback that was missing from the previous car. 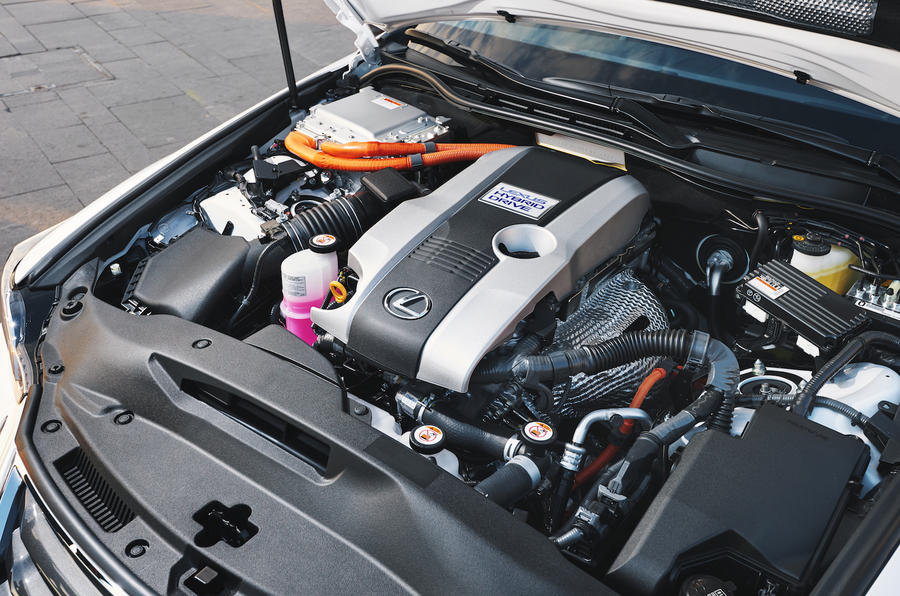 Lexus received plenty of criticism back in 2013 when it decided to buck the trend, and launch the third-generation IS with a line up of petrol-only engines. Yet, four years on, with the future of diesel increasingly in doubt, that decision is looking rather inspired. It's no surprise, then, that Lexus believes this updated IS will sell in greater numbers than the car it replaces.

However, putting its innovative roots aside, the IS ultimately feels a good few years behind the competition, despite the new revisions. Dynamically it still fails to provide a level of involvement that is readily available in its competitors, and the infotainment system can’t hope to compete with the likes of Audi’s Virtual Cockpit.

What have they done?

The headlamps of the pre-facelift car were one of its best features. I always like how small and sharp they looked. The new ones are awful.
Highline2.0 19 January 2017

This why I stopped buying the

This why I stopped buying the magazine. Not everyone wants to be hurtled around a bend 'on the limits' and are quite happy to be wafted about. I think Lexus have quite happily taken over Mercedes old mantle of relaxed luxury. They sell cars like the RC and LC if you want more involvement.
jamesf1 19 January 2017

This why I stopped buying the magazine. Not everyone wants to be hurtled around a bend 'on the limits' and are quite happy to be wafted about. I think Lexus have quite happily taken over Mercedes old mantle of relaxed luxury. They sell cars like the RC and LC if you want more involvement.