BACK TO ALL NEWS
Currently reading: Used car buying guide: Lexus IS F
UP NEXT
A life well lived: Tracing 120 years of the combustion engine

Sooner or later, most car manufacturers decide to let their engineers play on a race track to show the world what they can make. Most recently, Kia did it with the Stinger GT S, and back in 2008, Lexus did it with the IS F.

Coming from a brand lauded for its super-refined and reliable hybrid saloons, the IS F’s arrival was a pleasant surprise. Here was a car pitched to take on rivals such as the BMW M3 and Mercedes C63 AMG and it wielded a big and unusual stick in the form of a naturally aspirated 5.0-litre petrol V8 producing 417bhp.

Drive was sent to the rear wheels via an eight-speed automatic gearbox with flappy paddles, a lock-up mechanism from second gear upwards for faster shifts and an ability to go right to the rev limiter. (Check for unusual engine noises caused by over-enthusiastic revving.)

Below stairs, suspension components were forged from lightweight materials and the antiroll bars were beefed up. The only duff ingredient in this fascinating mix was the adoption of electric power steering.

It was expensive, too, but buyers forgave it because of its quality, technical specification, exclusivity and Lexus’s reputation for customer service. Reviewers praised its styling, engine note, chassis balance and strong brakes but criticised its hesitant gearbox, fidgety ride and absence of a proper limited-slip differential (instead, it has an electronically controlled open diff). 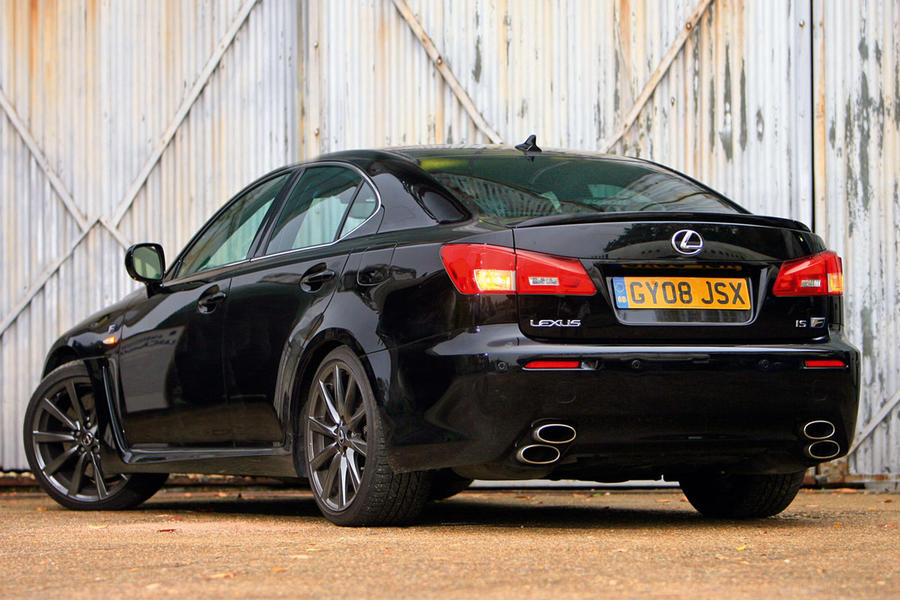 Fortunately, Lexus was listening, at least to complaints about the diff, and swapped the existing unit for a proper limited-slip diff in 2010. The sat-nav system was also upgraded.

More changes followed a few months later when the IS F’s ride deficiencies were partly addressed with the fitment of revised springs and shock absorbers. The rear suspension was also adjusted to provide greater stability. At the same time, the instrument binnacle was restyled and, outside at the front, LED daytime-running lights joined the existing HID headlights.

Despite these changes, only around 200 IS Fs had been sold in the UK by the time the axe fell in 2014. That’s good news if you like the idea of driving something a lot more exclusive than an M3 but not so good if you like plenty of choice when shopping for your next car. At the time of writing, we found only around 10 IS Fs for sale. However, they looked like good cars. Conversations with a handful of private sellers were encouraging, too. To an owner, they had nothing but praise for their IS F’s reliability and had taken real care of it. Our advice, though, would be to avoid paying their asking prices, which are on the high side.

We really tried to unearth problems with the model. The only relatively widespread issues we found, courtesy of a Lexus technician who owns an IS F, concerned leaky water pumps (earlier cars were most affected and problem pumps were replaced under warranty) and a leaky heat transfer plate. So not that much. If only we could say the same about an M3. 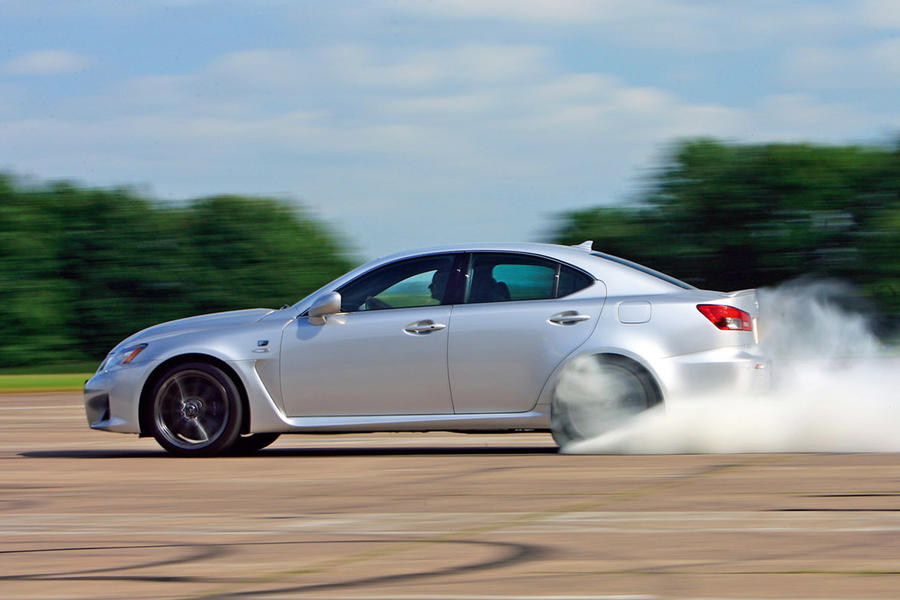 Jack Jordan: “It’s a rare and breathtaking car, the IS F. Mine is a 2008-reg with 59,000 miles. The gearbox is quick to change and the engine’s power is intoxicating. It’s a Lexus so very reliable apart from the well-documented water pump problem that affected earlier cars. Mine was changed without fuss under warranty. And that’s another thing about running a Lexus: the dealers. It doesn’t matter how old your Lexus is: they’re always attentive and quick to resolve any problems and their rates are reasonable. With enthusiastic driving, the IS F will get through brakes and rear tyres, but it’s a performance car, so what do you expect?”

■ Engine: The V8 is strong and capable of power upgrades, especially if you abide by the 5000-mile oil change interval. On earlier cars, the water pump can spring a leak so check the coolant level and look for coolant stains around the engine bay. A more serious problem is the curse of the leaking valley or heat transfer plate. You can expect labour hours to run into double figures. Beware cheaper sealant fixes.

■ Transmission: It’s a good idea to have the fluid level checked at the next service as some owners have reported a dip. Under full power and when changing up, listen for a squeak as the engine’s serpentine belt slips. Replacement of both it and its tensioner isn’t cheap.

■ Steering, suspension: Owners of earlier IS Fs report concerns with their cars’ ride quality. Autocar’s testers felt the F was softly sprung but not softly damped, so it felt harsh and pattered over all but the smoothest roads. At speed, over crests, it felt floaty, too. So if your chosen car feels like this, it’s meant to. The electric power steering feels remote but should be accurate and direct. It’s also very sensitive to wheel alignment.

■ Brakes: Autocar declared these to be excellent, but with 1720kg and 417bhp to control, they wear out quickly.

■ Body: Look for signs of body repairs, especially at the rear. 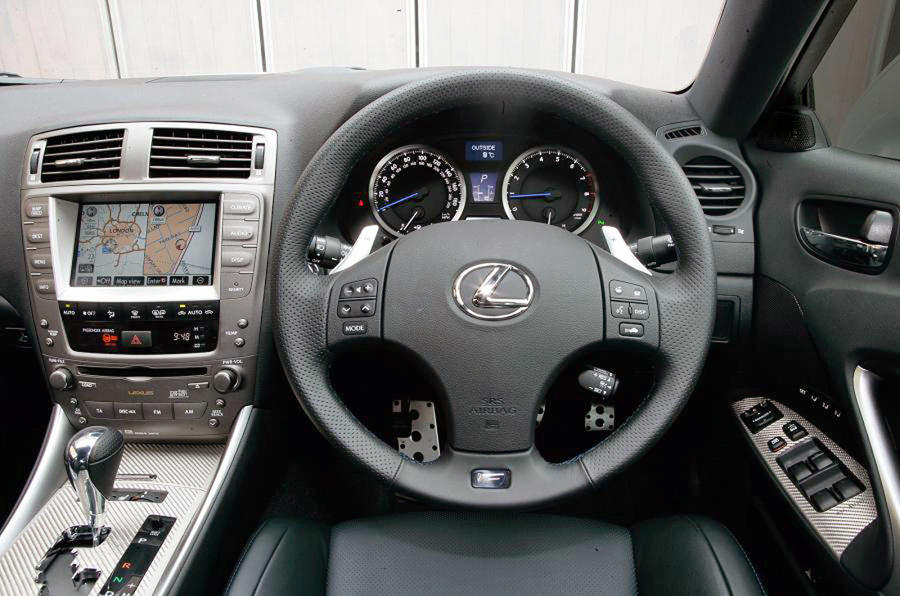 ■ Interior: Check the driver’s seat bolsters and ensure everything works, including the infotainment system.

Where an insurer has purchased genuine Lexus parts for accident repairs, a record of the sale is held by Lexus and available to view if you ask your dealer. It’s worth doing since new rear wheels, for example, could suggest repairs to the body following a spin.

Lexus LC500 Convertible will go on sale next year

Sort of ok but

lacks that certain something that I can't quite put my finger on, the steering wheel for instance is very uninspiring and likely that's the key to "what's generally wrong" with it.

Always liked the shape, didn't realise it had these annoying little problems which were or could be a constant fettling issue.

xxxx in a shabby disguise

Always liked the shape, didn't realise it had these annoying little problems which were or could be a constant fettling issue.

At the very least it has many fewer annoying problems than you, though you as always would have scrabbled around in the dust to find any excuse not to actually buy one...wait, try this one...it's not spelt Lecksus, so you certainly won't buy it now. Idiot.

Almost unheard of for a used performance car to have so few issues.  It's indicative of the quality engineering that Toyota / Lexus achieves.  The benchmark.