9
Honed for the track, stripped out, extreme and exciting, the swansong for Lamborghini's Huracan was never likely to be dull
Open gallery
Close

This is arguably the last hurrah for Lamborghini’s ‘entry-level’ sports car in its current guise; the final encore before the Lamborghini Huracán and its epic mid-mounted V10 are consigned to history by the relentless march of electrification. As you’d expect, the Italians are determined to go out in flamboyant style, which is where this STO comes in.

This circuit-sired, stripped-out version promises to be the most extreme and exciting incarnation yet, which is quite something, given that the Huracán has hardly been the shy and retiring type over its almost eight-year production run. Tuned for the track and boasting bespoke carbonfibre panels, a host of aero upgrades and unique suspension tuning, the STO (Super Trofeo Omologato, don’t you know) takes its cues from the firm's one-make race series cars.

Very few stones have been left unturned in the pursuit of performance, with the look-at-me bodywork being the most obvious clue to this car’s hardcore intentions. Outrageous aero aside, the STO gets a carbonfibre clamshell front end and the same lightweight material is used for the engine cover and rear wings. There’s even a thinner windscreen. Overall, weight is down to 1339kg (dry), which represents a saving of 50kg over a standard rear-wheel-drive Huracán.

And that aero? Well, at 174mph there’s up to 420kg of downforce available with the rear wing in its most aggressive setting (you’ll need an allen key to make adjustments), while aerodynamic efficiency is improved by 37% over the old Performante, the last attempt at an extreme, track-toasting Huracán. Big numbers, but largely irrelevant away from the confines of a circuit.

Speaking of which, we’re already driven the car on track and came away more than a little impressed. With all that weight removed and the aero doing its invisible thing, the low-slung Lambo delivered a dynamic display to rival such paragons of motorsport-infused performance as the Porsche 911 GT3 and McLaren 765 LT. High praise indeed.

Yet while track time was the ultimate target in the development of this outlandishly bewinged and carbonfibre-flavoured son of Sant’Agata, the reality is that it’s likely to spend more time sashaying down the road (or tucked up in a garage gathering value) than it will shaving tenths of a second from lap times. Even Lamborghini admits that only a third of owners will end up going around in circles. So what’s it like when you leave the circuit and hit some of the UK’s gnarliest and most knotted roads? 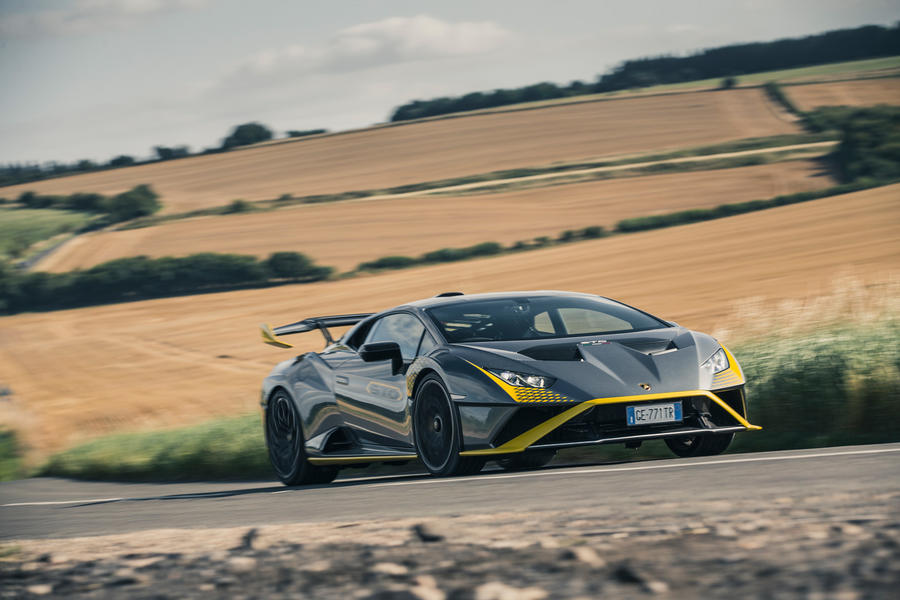 If anything, the Lambo looks even more outlandish on the road, its massive rear wing, vestigial roof-top snorkel (it appears to do very little because the engine still breathes through ducts in the rear wings) and gravel-grazing front splitter giving it true, eye-swivelling race car refugee visual appeal among the everyday traffic. The garish graphics won’t be to all tastes, but even if you choose the delete option on these decidedly aftermarket additions, you can still expect to be the centre of attention wherever you go.

Inside, the louvred engine cover cuts rear visibility to zero, while the circuit-star vibe is enhanced by the Alcantara-wrapped wheel and dashboard, the liberal use of carbonfibre and the looped fabric door pulls. That said, the recumbent driving position is spot on, you get a great view forwards and there’s even Apple CarPlay. This Huracán is habitable.

Flick back the red guard covering the starter, prod the button beneath and you’re granted entry to the STO’s star attraction: its mid-mounted 5.2-litre V10. This last-of-the-line celebration of naturally aspirated internal combustion is largely unchanged over the standard Evo, but a bespoke exhaust means it sounds even more extraordinary, while the carbon-clad, rear-wheel-drive STO’s weight savings add a little extra urgency to the performance.

Even so, compared with the rabid turbocharged punch of the McLaren 765LT or a Ferrari 488 Pista, the Lambo feels a little lethargic at low revs. (We’re talking relatives here, of course.) Engineers have tweaked the mapping for more urgency at lower speeds but, surprisingly, there’s no power increase over the standard car, the 631bhp peak a telling sign that the 5.2-litre unit is at the very limit of development.

Even so, as the digital rev-counter needle swings quickly around its dial, the STO’s true potential is uncorked. From around 4500rpm, the Huracán starts to accelerate with vicious intent, and by the time it hits the 8500rpm redline, the howling, bellowing, popping and crackling V10 will have sent you into sensory overload. especially once it starts to gobble through the seven-speed dual-clutch transmission’s short and closely stacked ratios. You can really use the performance in the first four ratios, unlike taller-striding rivals that are already travelling at highly illegal speeds by the time you’ve hit the top of second.

Of course, you’d expect the Lambo’s engine to be gloriously unhinged, but more surprising is the deft way the chassis deals with the UK’s scarred roads. Yes, the ride is firm but, like the Performante that preceded it, the STO’s adaptive dampers round off all the worst edges. Ramp up the pace and body control is exceptional, the Huracán shrugging off challenging topography with near-perfect poise, with only really ragged surfaces upsetting its equilibrium.

In fact, the STO feels remarkably at home on twisting back roads. It’s a bit darty and nervous to start with – the active rear steering is a little too keen to rotate the car into corners – but calm your inputs and you’re soon revelling in its twinkle-toed agility as it slices through a series of corners with an uncanny lack of inertia and laser-guided precision.

Turn in and there’s virtually no understeer, while the mid-corner balance is sublime, allowing you to load up the chassis just so. Better still, the combination of beautifully judged throttle response and the engine’s deliciously progressive torque delivery means you can subtly play with the car’s angle on exit. It’s not quite as expressive as a Pista, but it’s not far off.

It’s helped by the use of a fixed ratio for the steering rather than the Evo version's frustratingly inconsistent variable set-up, and in Trofeo mode, there’s a welcome meatiness normally absent from the Huracán, which allows you to more accurately judge grip levels, even if it’s not ultimately as chatty and revealing as a Porsche 911 GT3’s. The carbon brakes are up to Porsche standards, though. They lose their initial grabiness to deliver powerful and easily modulated stopping power. 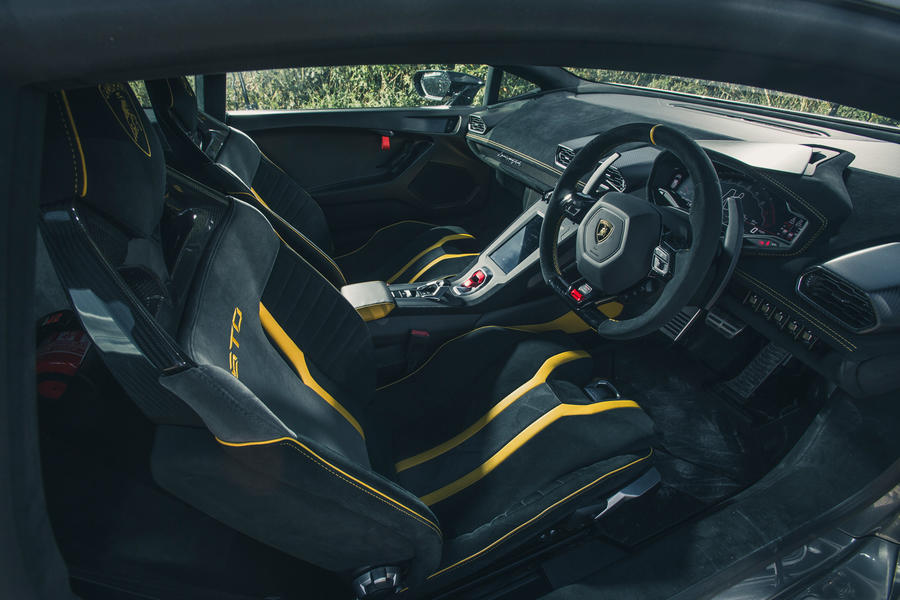 If you have the means and don’t mind being the centre of attention, the Lamborghini rewards in spades on the road. A 911 GT3 gives a little more feedback and features controls with a finer polish, while a Pista is out-and-out faster, but for visceral thrills, the Huracán is up there with the best - and this time it’s not all down to that ludicrous yet life-affirming V10.

In fact, it’s all so well judged on the road that you’ll soon have forgotten about meaningless downforce figures and faster lap times. Crucially, you’ll be mentioning the Lamborghini's name in the same breath as some hugely talented opposition.

There’s also the small matter of it being a genuine series-production car, which means you’re more likely to get your hands on one than some of its rivals, even if this year’s allocation is already sold. More important, the STO is a truly fitting last hurrah for the Huracán. 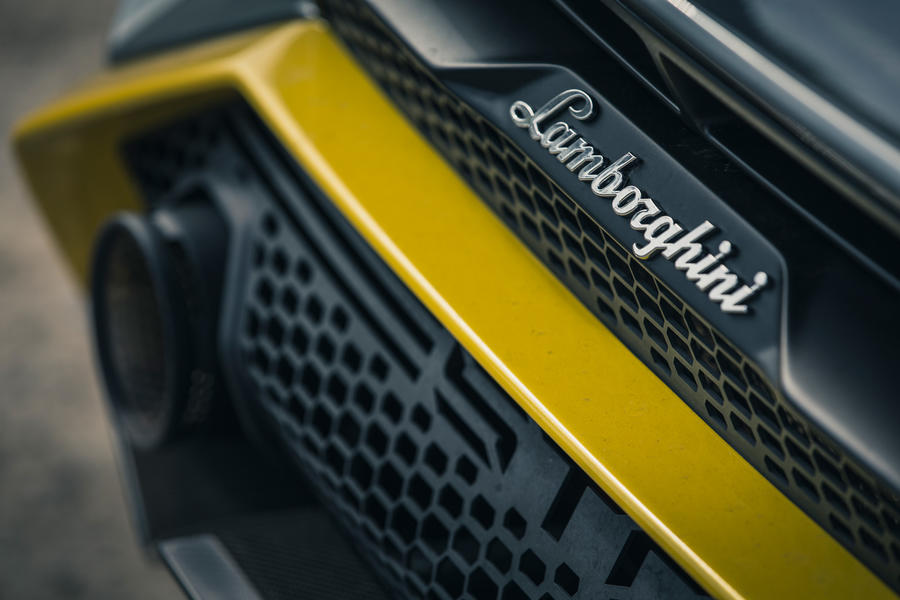 Looking forward to the 'last hurrah' for articles that use the phrase 'last hurrah' every time someone tries to flog another ICE variant. This 'hurrah' business has been going over for five years (see also 'swan song') and is becoming tiresome.

Looking forward to the 'last hurrah' for articles that use the phrase 'last hurrah' every time someone tries to flog another ICE variant. This 'hurrah' business has been going over for five years (see also 'swan song') and is becoming tiresome.