9
Share review
A new brain helps the Huracan Evo correct the dynamic wrongs of its predecessor, and its V10 is now even more ferocious
Share
Open gallery
Close

It’s not often you find worthwhile, literal meaning in a car’s name, but the Lamborghini Huracán Evo is one such car. So extensive is the roster of updates the Sant’Agata firm has introduced to its junior supercar that referring to it as a mere facelift doesn’t quite seem to do it justice.

In practically every way you could care to think of, this represents a bona fide evolution of the Huracán breed. The standard car was certainly a highly likeable member of the supercar class, but its charm came more from the ferocity and uniqueness of its naturally aspirated V10 engine than any ability to impress on road or track with seemingly endless reserves of balletic grace and agility. The Evo sets out to right the wrongs of its predecessor and more closely align what is now the entry-level Huracán with its fantastically visceral, hugely capable big brother, the Performante.

Adopting the uprated engine from that lightweight, track-focused special is a good place to start. As in the Performante, the Huracán Evo’s 5.2-litre naturally aspirated V10 gains titanium inlet valves and a new lightweight exhaust system, as well as a hike in performance that increases power to 631bhp at 8000rpm and torque to 443lb ft at 6500rpm. Admittedly, the software that governs the engine isn’t the same, but the Huracán Evo will still dispatch the 0-62mph sprint in 2.9sec and go on to hit a top speed in excess of 202mph.

Elsewhere, the Huracán gains rear-wheel steering and torque vectoring, and its magnetic dampers, dynamic steering rack and traction control systems have all been extensively updated. Tweaks have also been made to its exterior, so that it not only looks more aggressive but is more aerodynamically efficient, too.

Of all these modifications, though, it’s the introduction of what is effectively a new central brain that stands out as the most significant. It’s called the Lamborghini Dinamica Veicolo Integrata (LDVI), and its job is to process the vast amounts of information relayed to it from all of these systems and coordinate their combined, immediate response. The theory is that this should make the Huracán Evo not only far better at reacting to changes to its immediate environment but also capable of predicting what might be coming next – from both the driver and the topography under wheel.

It all kind of puts us in mind of the Matrix, specifically the part where Neo plugs himself into a computer so that a range of different martial arts can be uploaded directly to his brain. As that ‘training’ programme did for Neo, LDVI sets out to rewire the Huracán, making it harder, better, faster and stronger. It’s tempting to say that it now knows kung fu, but we won’t.

Anyway, when we drove the Huracán Evo on track in Bahrain earlier this year, we found these changes came as a revelation. This was a car far sharper, far more agile and far more rewarding than its predecessor ever was. Now, though, it’s time to see how the Huracán Evo copes with the task of dealing with Britain’s less-than-stellar road network. 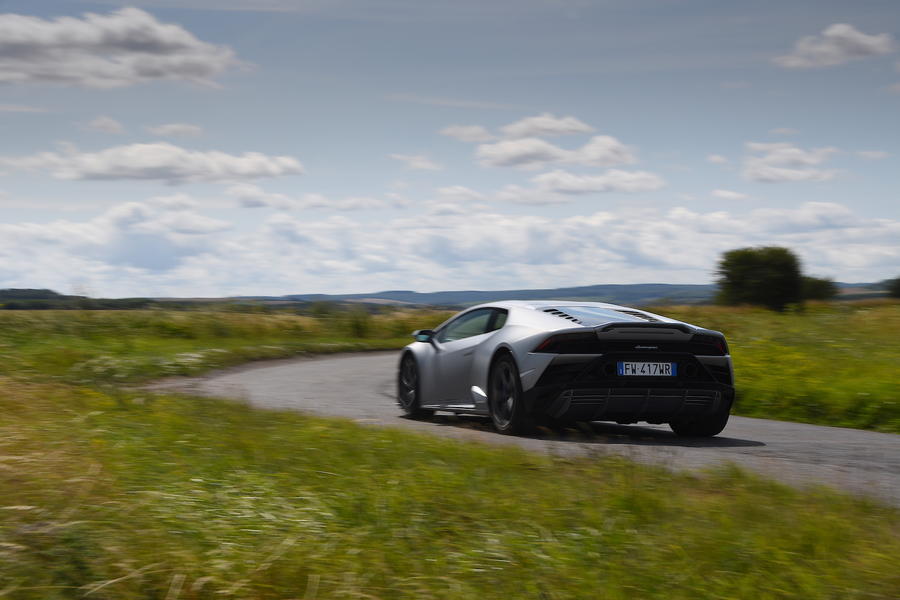 Under less exciting, everyday driving conditions, it takes just a few miles to conclude that the Huracán Evo wouldn’t be as easy to live with as, say, the McLaren 720S. For starters, visibility is pretty poor. The dramatically raked windscreen means you constantly feel as though you’re peering out of a letter box and in low afternoon sun reflects the top of the dashboard so severely that it can be difficult to actually make out the road ahead. The A-pillars are also right in your line of sight, which is annoying during cornering, and the view out the back is fairly dismal. The 720S runs rings around the Huracán Evo in this respect.

In Strada, the calmest of the driving modes, the Lamborghini doesn’t ride with quite the same other-worldly, surely-this-can’t-be-a-supercar level of composure as the McLaren, and its seats will leave you aching and stiff after anything more than a couple of hours at the wheel. The dual-clutch automatic gearbox, although well mannered enough when left to its own devices, isn’t as polished as the 720S's, either. But, Lord, as soon as you find a quiet, challenging stretch of road and select Sport mode, it’s likely that you just won’t care.

The Huracán Evo is not only a tremendously thrilling car to drive quickly but also an engaging and communicative one. The response from the front end as you add increasing amounts of lock to the steering is immediate, and the picture it paints about the levels of grip you have in reserve is clear and confidence-inspiring. It’s not quite as clear a picture as you get from the 720S, but it’s enough to leave you with the impression that you’d have to be seriously skilled, be seriously brave or have a serious amount of disregard for the Highway Code to get anywhere near the Huracán's limits on the public road.

Often, such immense levels of competency can be frustrating, but the Huracán’s ability to attack the same corner over and over again at ever increasing rates of pace never ceases to impress. The immediate, predictably linear response from the engine eggs you on into making mid-corner throttle adjustments to marginally upset the car’s impeccable balance and tease out moments of dynamic attitude just for the fun of it. Corsa mode sharpens things further and makes the Huracán even more reactive, but at this point, the damping becomes a shade too firm for comfortable use on the road. Still, it’s a thrilling machine.

It has a thrilling engine, too, and the need to hit 6500rpm to access peak torque is massively refreshing in an increasingly turbocharged world. Progress above this point is utterly savage, and the accompanying soundtrack has an almost end-of-days theatricality to it. It’s magnificent. And because the dual-clutch ’box is quick-witted enough to keep the crank spinning at such speeds when operated manually, you’ll find you stay there most of the time. To hell with fuel economy or the fact that you might end up with mild hearing damage: this could well be one of the last naturally aspirated V10s we’ll ever see, so rev it out to the redline and savour it while it lasts. 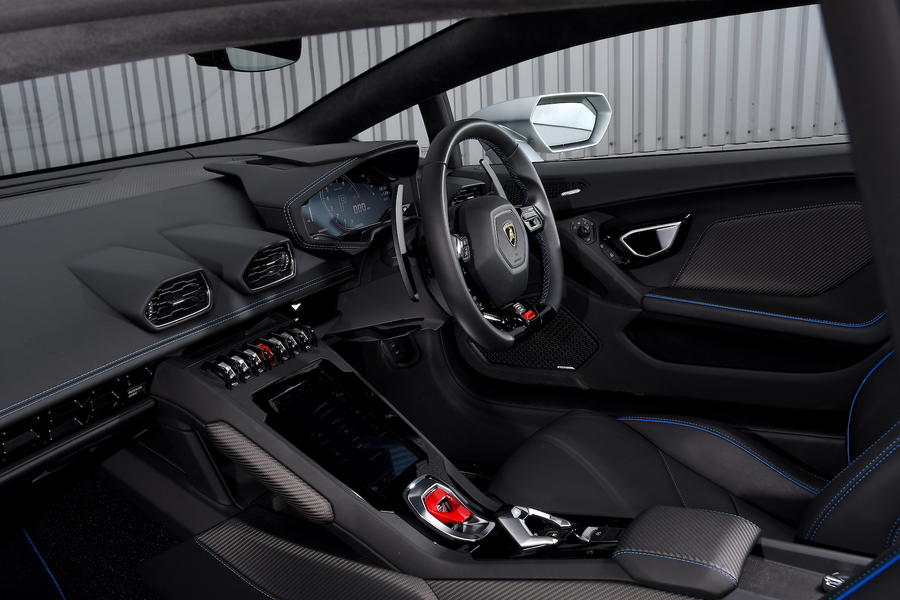 So, does Lamborghini now have a genuine rival for the 720S? In many ways, yes. The Huracán Evo is a thrilling, captivating, impressively agile and responsive supercar that’s in every way capable of increasing your heart rate and getting your adrenaline pumping.

At the same time, though, the 720S is the more complete package. It’s easier to drive and see out of, more refined and genuinely communicative, too. The amount of steering and brake pedal feel you get from the Lamborghini pales in comparison with the McLaren’s.

But the McLaren lacks the character of the Lamborghini. The Huracán Evo is a proper supercar, with a properly endearing feral streak and an engine to die for. The 720S may be the one you’d want to live with, and it might even be the more capable of the two on track, but we reckon it’d be the Lamborghini you’d go to bed and dream about. 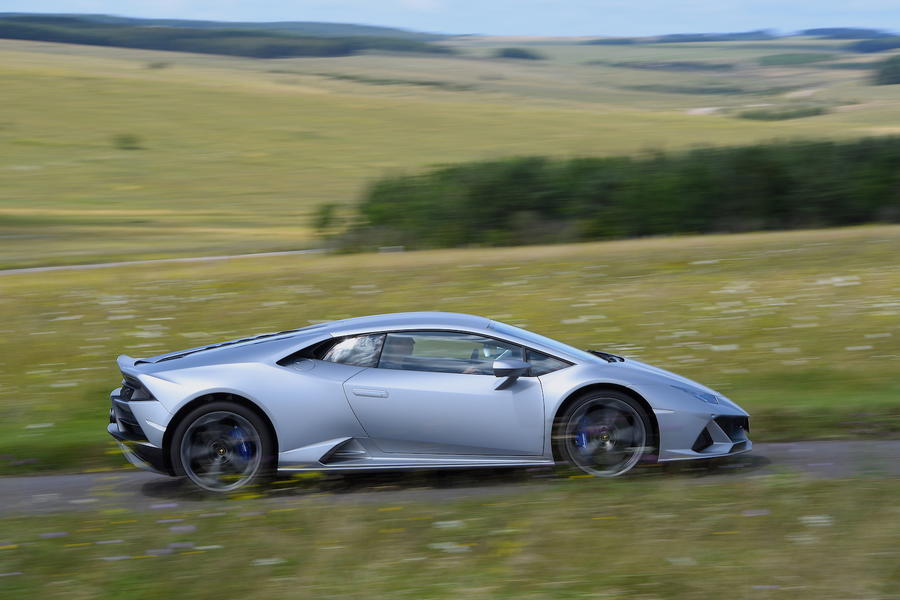 The new brain might well make it better. I could improve it too. Make it RWD, manual box, nice and simple. Cant promise they would sell any, but i would prefer it that way

The 720S is no doubt the more complete and better supercar. But in the key areas that matter for a supercar, especially THAT engine, the Huracan for me trumps the McLaren and it's because of that, I'd always plump for the Lamborghini. Even if overall it's not as good as the superb 720S.

The 720S is no doubt the more complete and better supercar. But in the key areas that matter for a supercar, especially THAT engine, the Huracan for me trumps the McLaren and it's because of that, I'd always plump for the Lamborghini. Even if overall it's not as good as the superb 720S.

I'm with you on that - I'd buy it just for the engine.