Plenty of Lamborghinis have proved their ability to perform on track. Indeed, both the Huracán Performante and the Aventador SVJ are previous holders of the Nürburgring Nordschleife lap record for a production car.

But the Huracán STO marks a new direction for the supercar maker, as the first derivative that Lamborghini has designed around a brief of regular circuit use. It’s targeting the same part of the market as the McLaren 765LT and Mercedes-AMG GT Black Series.

STO stands for Super Trofeo Omolagata (Italian for homologation), as a fair amount of its go-faster technology is drawn from the car used in the Super Trofeo one-make racing series. The STO isn’t as fast around a circuit as its slick-shod sister, but our first drive on the Vallelunga track near Rome proved that it’s almost certainly more fun on track.

The STO’s engine is probably the least changed thing about it. This is Lamborghini’s long-serving naturally aspirated 5.2-litre V10, making the same 631bhp peak power that it did in the Huracán Performante – that figure obviously some way adrift of its turbocharged rivals’.

It can’t match them on torque, either, with the peak of 416lb ft arriving at a high 6500rpm. But it revs to a sonorous 8500rpm and delivers urge to the back axle through a seven-speed dual-clutch automatic gearbox .

The STO being rear-wheel drive rather than four-wheel drive has saved only a relatively modest 20kg, according to Lamborghini chief technical officer aurizio Reggiani, but more mass has been saved with lighter bodywork (most of the panels are carbonfibre) plus a stripped-out interior in which the carpeting is replaced by rubberised matting. Even the windscreen is thinner. Despite the 8kg additional weight of an active rear-steering system, the resulting 1339kg dry weight is 43kg less than that of the Huracán Performante.

Aerodynamic changes are the area where the STO owes most to the Super Trofeo, losing the regular Huracán’s adaptive systems and gaining a vast, double-element rear wing with three manually adjustable positions. Working in conjunction with the huge front splitter, the most aggressive of these generates 420kg of downforce at 174mph (the others make 363kg and 324kg respectively).

The STO rides on new Bridgestone Potenza tyres, offering a choice between Cup and Race spec, the latter being close to road-legal cut slicks. Motorsport-grade Brembo CCM-R carbon-ceramic brakes, similar to those fitted to the McLaren Senna, complete the list of good stuff. 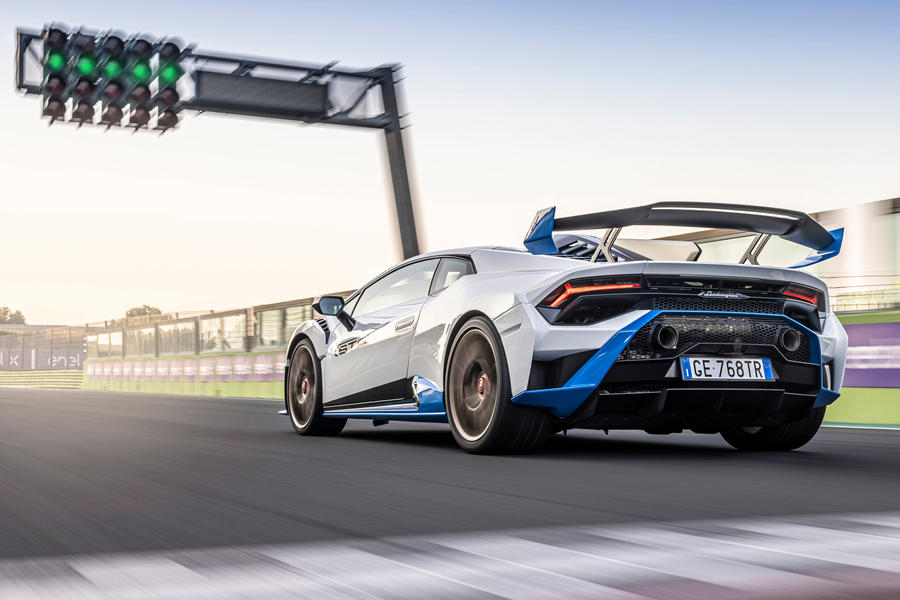 While much is familiar from my first drive at Nardò in the prototype version, a fair amount has changed as the STO has reached production status. The prototype was clad in a tatty disguise wrap; the finished version shows off the scale of the bodywork transformation, especially the one-piece front clamshell (or ‘cofango’) with huge apertures to let air pass in and out and Porsche 911 GT3 RS-style vents in the tops of the wings.

Subtle it ain’t, especially in one of the colour-contrasting paint schemes and with the optional STO graphics on the doors.

The cabin is minimalist by comparison, with lots of naked carbonfibre surfaces, an Alcantara-clad dashboard and pull straps in place of conventional door handles. The race-style bucket seats can be adjusted for height and rake, but the cars in Italy had four-point harnesses, these incorporating seatbelt sensors.

At low speeds (an experience limited to trundling in and out of Vallelunga’s pit lane), the finished STO is considerably quieter than the prototype version was, presumably to meet drive-by noise regulations. But selecting the track-intended Trofeo driving mode and passing 4500rpm causes acoustic flaps in the exhaust to open, turning the soundtrack utterly savage. It’s loud even when you’re wearing a helmet and becomes electrifying towards the top of the rev range, the rate at which the mighty V10 reels in its gearing meaning drivers will experience plenty of it.

The STO’s steering is deadly accurate but, like that of lesser Huracáns, still feels lighter than the supercar norm. Strong caster effect makes it easy to keep track of where the front wheels are pointing, even if the car starts to slide. But Vallelunga’s smooth, hot Tarmac produced little chatty, incidental feedback. Grip proved predictably huge once the full-spec Potenza Race tyres got up to temperature, with the on-board telemetry system reporting frequent peak lateral loadings of more than 1.2g.

Yet the STO doesn’t feel snappy when you breach its towering limits. Front-end adhesion is huge and the engine’s linear responses and benign torque delivery make it easy to power the rear end to the edge of breakaway in longer corners.

Oversteer is readily engendered: Trofeo mode allows substantial slip before the stability control intervenes (although the lost time reported by the telemetry’s Delta function proves that the Potenza Race tyres prefer to deliver their grip cleanly). Based on my experience at Nardò, the less aggressive Sport tyres will be slower but happier to turn playful.

Rising levels of aerodynamic downforce also make an increasingly obvious contribution as speeds rise. This happens pretty much invisibly: the STO’s steering doesn’t get heavier or its ride harsher as it gets pushed harder into the ground. But the speeds it can carry through faster corners, especially Vallelunga’s adrenaline-spiking first turn (which the Huracán takes in fifth gear), quickly prove how much behind- the-scenes assistance is going on.

The CCM-R brakes are hugely powerful and seemingly tireless, with a switchable data screen giving a colour-coded graphical indication of the temperatures being generated. Even the hardest use and taking the STO either close or into ABS intervention could only occasionally turn this readout from green to yellow, and then only fleetingly. The pedal feels a bit lighter than the supercar norm but stiffens after a small amount of initial travel to make it easier to modulate pressure.

The STO also has a comprehensive on-board telemetry system, able to log data, record videos (which can then be uploaded to an app) and even suggest optimal gears for each corner on mapped circuits. The official idea is to help owners hone their driving technique, although the ability to share heroic track-driving exploits with friends and acquaintances is likely to hold a bigger appeal. 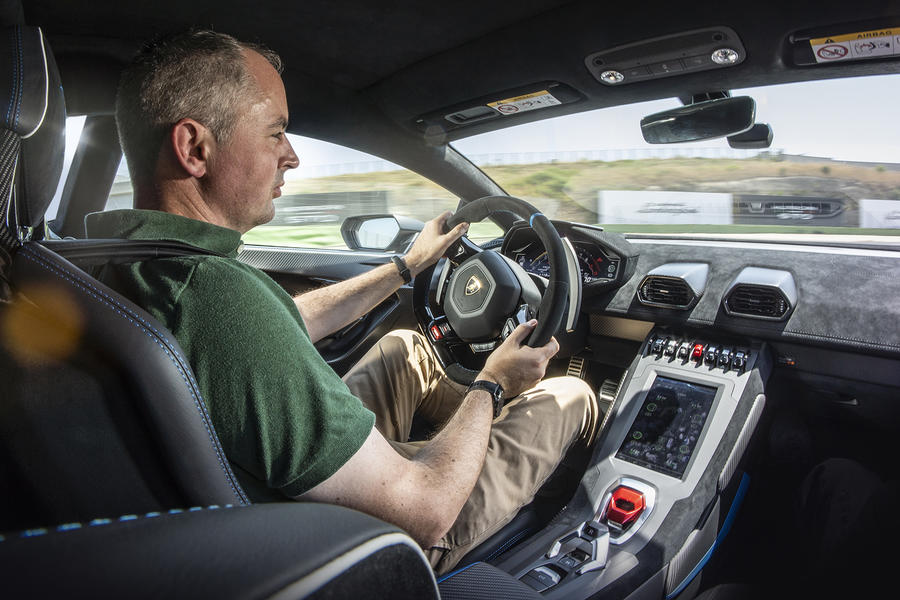 Unlike the 765LT, the Huracán STO won’t be a limited-run model. Lamborghini says that only restricted production for some of its carbonfibre components will constrain numbers.

Customer deliveries have already started, and company CEO Stefan Winkelmann says the waiting list already stretches to July next year – a figure that represents more than 1500 cars globally. He also reckons that at least a third of buyers plan to regularly use their cars on track. On the basis of this experience at Vallelunga, it would be a hugely wasted opportunity if they didn’t.

UK deliveries have already begun, too, with on-the-road prices starting at £268,000 before options. That’s a substantial supplement over the regular Huracán Evo, yet one that doesn’t look outrageous in this rarefied part of the market (the STO is slightly cheaper than the 765LT).

For those seeking, and willing to pay for, the fastest and most exciting Huracán, this is definitely it. 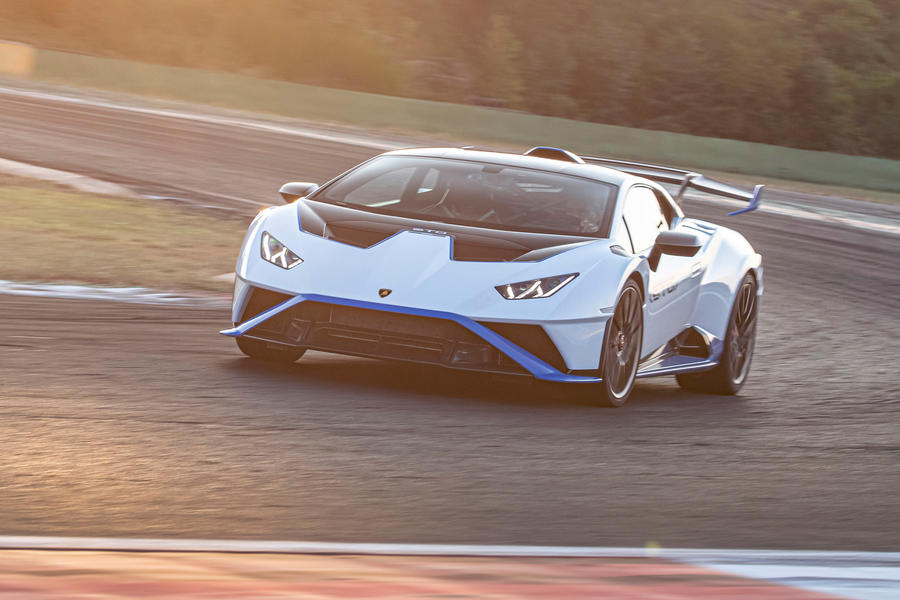 Lamborhgini's shouLd be purpLe with avec yeLLow Jeune wheeLs. There are so many women, femme at Le OLympics. ToKyo 2021. Toyota Bridgstone, Hydrogen cars, I thinK.

Laos 30 July 2021
If only we could see a genuine head to head race between this, the 765LT and Pista. All three cars on the same track at the same time racing...#perfect
View all comments (4)