9
This fastest, most hardcore take on the Huracan borrows much from the Super Trofeo race car. We drive it in prototype guise
Open gallery
Close

The ultimate incarnation of Lamborghini’s most successful model of all time. The STO will be the fastest road-legal version of the Huracán. It's set to outshine even the mighty Performante and is designed for hard use on track. STO stands for Super Trofeo Omologata, with this being – as close as is possible – a road-legalised version of Lamborghini’s Super Trofeo race car.

The company’s engineers are proudest of the STO’s aerodynamic transformation, with both a huge downforce peak and significant contribution at the speeds more useful for driving on track. There are no active elements, but the combination of a redesigned front end, huge diffuser and a three-position adjustable rear wing means the STO makes up to 450kg at 174mph. That’s 100kg more than the Performante’s maximum, which came at 193mph.

Weight has also been saved, although most of it because the STO uses rear drive rather than the all-wheel drive of the Performante. More mass has been trimmed with magnesium alloy wheels, titanium rear arches and a one-piece front-hinged carbon clamshell. The cabin features a half-cage, carbon-shelled sports seats and floor mats in place of the fitted carpets. Lamborghini also says thinner glass makes the windscreen 20% lighter than the one in the Performante. On the company’s numbers, the STO weighs 1339kg dry – 43kg less than the Performante.

As with every other Huracán, the STO is powered by a naturally aspirated V10 designed to give its best at stratospheric revs. With 631bhp, this produces the same peak output as the Performante, but the maximum 416lb ft of torque is 27lb ft less. Lamborghini says the STO’s engine has been tuned to improve throttle response – hardly a criticism of any previous Huracán – and to sharpen its top-end soundtrack.

Other mechanical changes are as you would expect – stiffened suspension with new bushes and anti-roll bars, firmer settings for the active dampers and bespoke Bridgestone Potenza tyres that will be offered in both road-biased and track-biased varieties. Motorsport-grade CCM-R ceramic brakes are fitted and claimed to offer four times better thermal conductivity than regular carbon-ceramic discs and a 25% increase in braking power.

The STO also gets what initially seems the counter-intuitive combination of fixed-ratio steering – without the option of the variable rack of other Huracáns – and active rear-wheel steering to sharpen responses. It also has active torque vectoring. The Anima dynamic controller gets three new modes to match the car’s toughened character: STO is for road use, Trofeo for a dry track and Pioggia for use in the wet. 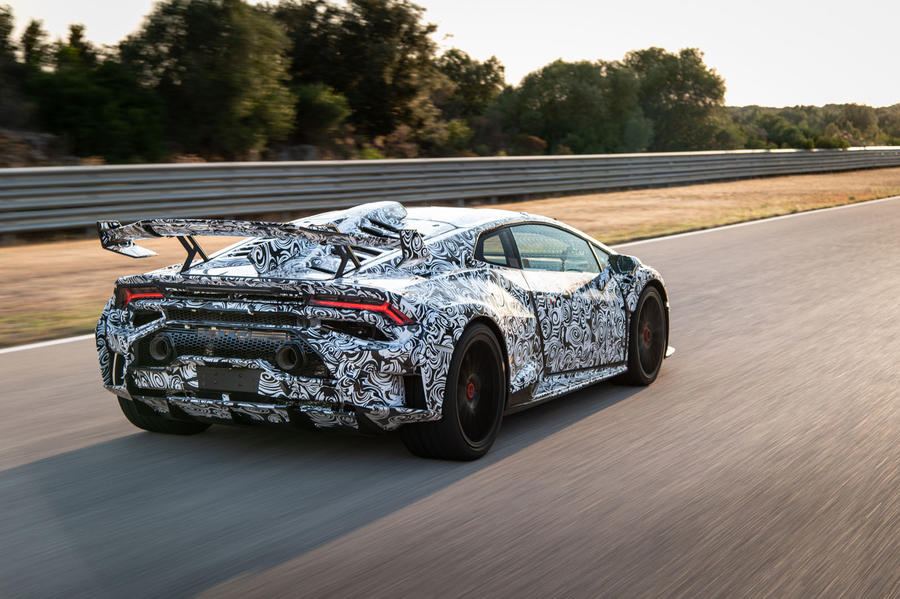 My experience was limited to a pair of development prototypes and was exclusively on the demanding 3.8-mile handling circuit at the vast Porsche-owned Nardó proving ground in southern Italy. This gave little chance to assess how the finished STO is likely to deal with life beyond a race track, although you’ll be unsurprised to hear that ride is firm and refinement was obviously way down the engineers' list of priorities. But on track, it promises to be an absolute monster.

The mighty V10 has been turned up to 11. Responses to even the smallest change in accelerator input are instantaneous, and although it can’t match the low-down wallop of turbocharged alternatives, it doesn’t feel lacking in brawn when being short shifted, with the relative shortfall in torque making it easier to trust bigger throttle openings at lower engine speeds. The motor sounds spectacular, too – not noticeably louder than the regular Huracán (and certainly not when experienced through the padding of a helmet) but with a rasping that crescendoes to a savage climax when the rev counter starts to turn red. The dual-clutch transmission is close to unimprovable, changes delivered with lightning speed heading both up and down its seven ratios.

While the prototype STO’s chassis has more grip and better adjustability, other Huracán dynamic traits remain. The steering is ultra-precise but remains light, with only limited sensation reaching the wheel in the first few degrees of lock. Turn-in is based on acquired trust more than fulsome feedback, too. But once in a corner and loaded up, the chassis inspires massive confidence, with the STO’s line easily and instinctively adjusted using the throttle.

It can be powered into oversteer, unsurprisingly, with the Trofeo setting allowing for considerable slip before the stability systems intervene. More impressive is the prototype’s sensitivity to weight transfer, allowing the relative grip of front and rear axles to be varied with small changes in accelerator pressure. Rear steering can be felt working in slow corners only and torque vectoring is similarly invisible. Once the tyres are warm and biting hard, the STO feels remarkably unscary for something so potent and rear-wheel driven. It’s certainly less bitey on track than the McLaren 765LT.

Exploiting the Huracán’s substantial downforce requires a leap of faith. The prototype’s steering doesn’t gain any discernible extra weight as aerodynamic assistance begins to push the STO harder into the ground. Proof of the forces involved come from the ability to carry increasingly unlikely g-forces in faster corners, and especially Nardó’s near-flat turn one at the end of a half-mile straight. Having the rear wing in its highest downforce mode gives most confidence on the really quick stuff, but it does also bring more understeer on Nardó’s many long medium-speed turns.

The brakes deserve special praise. The CCM-R discs gives huge confidence and incredibly short stopping distances, taking huge thermal loads without complaint. A graphic readout on the dashboard reports on disc and brake fluid temperatures and only the hardest stops during this test changed the display from green to yellow for a couple of seconds. The production version will also feature an on-board telemetry system to allow driving data to be viewed and analysed using a smartphone app. 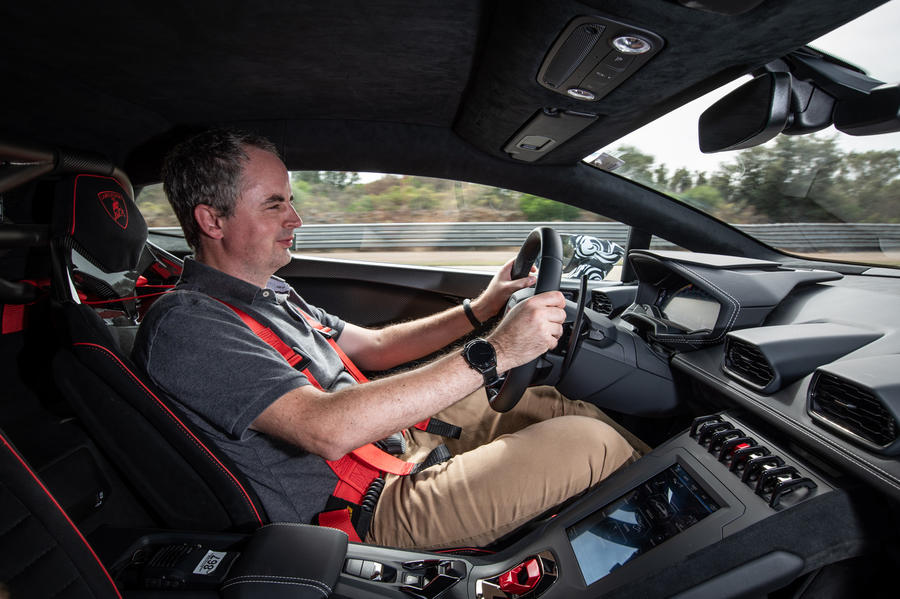 If you’re looking for the ultimate Huracán – and have more than a quarter of a million to spend on it – then the STO is the one. But while many will be attracted to it as the range-topper, potential buyers should consider how they will use it. Anyone not planning for regular circuit work will end up with a car that will feel compromised and raw in the real world.

Comparison with the all-wheel-drive Performante is inevitable and gives a clear indication of where the STO’s priorities lie. Lamborghini hasn’t confirmed whether it plans to try and match the Performante’s achievement of a Nürburgring Nordschleife production car record with the STO, but it does say the new car is substantially faster on track than its predecessor. We’re told that around the Daytona International Speedway, the STO’s 1min 48.9sec lap time is nearly three seconds quicker than the Performante's and only 2.5sec off the pace of Lamborghini’s GT3 Evo racer.

'Race car for the road' is an overused phrase, but it seems entirely justified with the STO. 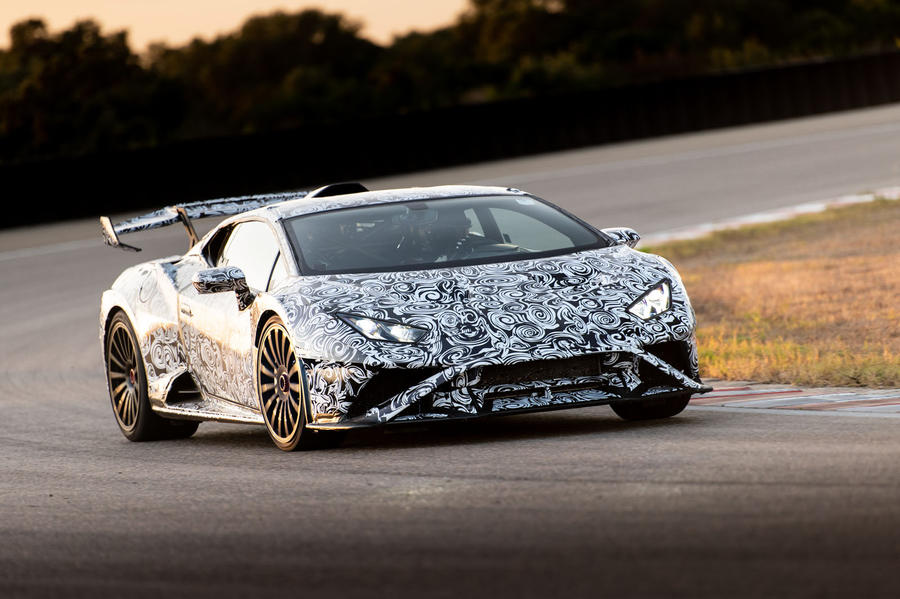