Seldom does any supercar rank high on the global agenda and that’s true now more than ever, but on planet Autocar the new Huracán Evo Spyder – and the Spyder specifically – feels significant.

For one thing, the Huracán is the likely final resting place for Lamborghini’s naturally aspirated V10 engine, and now that the midlife ‘Evo’ updates have been introduced, we’re closing in on the day the model gets mothballed. And that will be it for one of the greatest road-car engines of all time. Secondly, carbon monocoque or not (and in this case not), these days so scant is the dynamic disparity between open-air supercars and their enclosed counterparts that if you prefer the former, there are precious few drawbacks.

If you’d therefore like to secure an example of post-millennium Lamborghini at its most elemental, capable and mandible-slackening best, the Huracán Evo Spyder is the model to have.

That, at least, is one theory, and it’s one the spec-sheet does nothing to quell. Compared to the Huracán LP610-4 Spyder it supersedes, the Evo Spyder boasts ‘improvements’ almost everywhere you look, though the most significant development is the adoption of the phenomenal 5.2-litre V10 from Lamborghini the Performante. It uses new titanium valves with greater lift, plus a redesigned intake manifold. The system then culminates in a lightened, enlivened exhaust that threads two unmissable perforated barrels directly through the rear bodywork. The car is simply dripping in drama, and the extreme rake on the windscreen something truly special – even if it means you’re obliged to stop 15 yards short of the white line to see traffic lights changing colour.

Folding canvas roof aside, the Spyder follows the lead of Lamborghini the Huracán Evo coupe. In the metal, the bodywork isn’t quite as neat or timeless as that of the old LP610-4 but it ups the aggression factor and predictably generates better wind-tunnel figures. The larger front intakes aren’t hard to spot, but look more closely and you’ll see myriad fresh creases and flicks all over the car. Most noticeable is the slotted ducktail spoiler, towards which the headrest buttresses flow and which gives the car an even more predatory look. In this case Arancio Xanto paint completes the pantomime on wheels, and the only relative disappointment is that the engine, whose cam-covers are artfully exposed on the coupe, lies hidden beneath the roof mechanism.

As an Evo, the new Spyder also receives the Lamborghini Dinamica Veicolo Integrata (LDVI) chassis, which sounds grand but is, in fact, extremely clever. A central electronic brain takes steering and throttle inputs along with data from roll, pitch and yaw sensors and blends – predictively, claims Lamborghini – the responses of the magnetic suspension, rear-wheel steering, torque vectoring and stability control, plus the torque split for the four-wheel drive. You can see all the data in real-time on the new central 8.4in touchscreen, which, incidentally, looks slick but isn’t responsive enough and forces you to look down for longer periods than are desirable in a machine with a compulsive need to carry colossal speed anywhere it goes.

We’ve criticised LDVI in the past because it can make for unnatural direction changes, but its goal is simple, and that’s to ensure the car moves where it’s pointed and moves harder, more accurately and with considerably more agility than before. On the Evo Spyder, it most definitely succeeds in this respect. As a point-to-point machine, you’d need something like the new Porsche 911 Turbo S to claw yourself away from the Lamborghini. It is prodigiously quick and often feels animalistic.

And that’s despite the weight of the thing. Inevitably there is more mass here than the coupe, though no more than the outgoing Spyder. Thing is, the coupe is already heavier than some of the opposition – both McLaren’s McLaren 720S and the new, massively powerful Ferrari F8 Tributo tread over 100kg more lightly on the scales than the Lamborghini – and with a dry weight of 1542kg the Spyder is 120kg heavier still. Not that’d you’d notice it without back-to-back tests and an unusually sensitive biological gyroscope, but still. 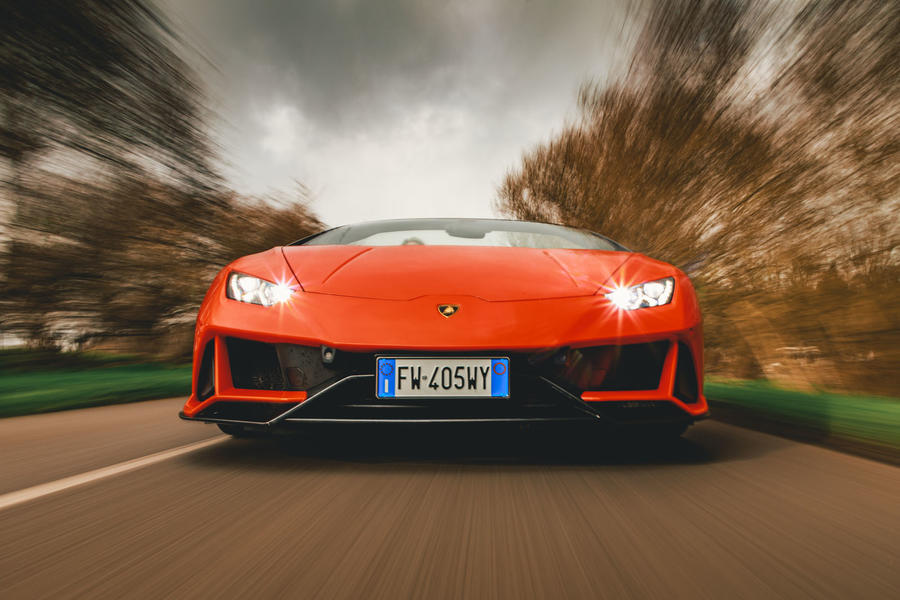 Climb aboard and it’s akin to sitting in a pillbox. One lacking in legroom. The Huracán, like many mid-engined Lamborghinis of yore, has always been a machine for whom human occupancy is merely an afterthought, and this is especially true for the Huracán Spyder because the firewall sits further forward than in the coupe. Lamborghini’s new Sport seats should improve matters but this car doesn’t have them and taller drivers may still find their scalp grazes the canvas roof and their thighs occasionally brush the flat-bottomed steering wheel, which in 2020 feels unforgivable. The coupe fares better in this respect, though not much.

However, the Spyder does one brilliant trick the coupe can’t match, even before you drop the top. There’s a small rear screen that can be slid down to allow valvetrain-whirr and exhaust blare into the cabin. It’s hugely effective – genuine 'piped-in' engine noise – and it becomes the norm to have it down whatever the weather. Lowering the roof wholesale is then painless, taking 17 seconds via an electrohydraulic mechanism activated at up to 30mph.

And now the £218,000 Huracán Evo Spyder is ready for your undivided attention. We’re yet to drive the targa-top Ferrari 812 GTS, but that car’s 6.5-litre V12 aside there’s surely no comparable machine whose engine is so totally raw, enveloping and hair-trigger precise as this Lamborghini V10. And turbos be damned: 70% of the 412lb ft torque total is developed at only 1000rpm, so if you want to snag fourth gear and blow hot-hatches into oblivion when pulling away from 30mph zones, this car will do that without breaking a sweat.

And the noise – sorry to go on like this – is something else. Something utterly primal. The final thousand revolutions of the crankshaft as it closes in on 8500rpm get all the headlines, but between 3000 and 6000rpm the broad, induction-heavy and comically beefcake bellow is almost as enjoyable and permeates the surrounding area like sonic cement. Is it worth putting up with the Spyder’s interior ergonomics for this? Honestly, it’s not even a serious question.

But when your direct rivals are McLaren and Ferrari you need to deliver more than a glorious soundtrack. Most impressive is how unflustered the Lamborghini remains by the road beneath it, brushing off cambers and ripples without deviation and cornering in ultra-flat fashion. Potholes can send a brittle flutter through that peeled-open body but otherwise it feels every bit as stiff and secure as the coupe. And between the predictable linearity of the power delivery and the driven front axle – which is rarely, if the LDVI readout is to be believed, taking any less than one fifth of the available torque – traction and grip are heroic.

Equally, there’s still something vaguely contrived about the way the rear-wheel steering works with the torque vectoring, and perhaps the speed-dependent steering rack. Something that makes cornering in a neat, uniform arc come less intuitively than it should. The nose is almost too keen to attack an apex – though you could argue this suits the car’s rabid character – and the initial steering response feels binary. The standard-fit carbon-ceramic brakes are also massively powerful but a touch overservoed, so it can be difficult to establish a rhythm. And even with the dampers in their softest Strada setting, the suspension still feels overly firm and lacks the confidence-inspiring front-axle plushness of rivals. 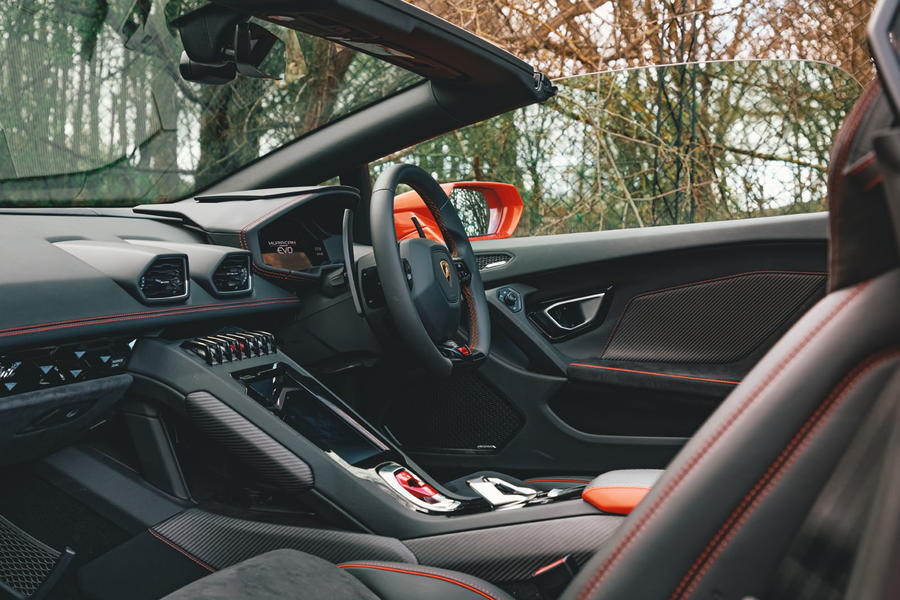 So do you go for the Huracán Evo Spyder, 720S Spider or F8 Tributo Spider? Boil it down and they’re very different cars. The Lamborghini is less about purity and nuance (McLaren) or exploitable handling (Ferrari) and more about superficial drama underpinned by just enough security underwheel to fully unleash the whirlwind V10.

Those priorities won’t be for everyone but they’re very Lamborghini, and frankly, nothing beats the Huracán Spyder at its own addictive game.

Perhaps when the V&A puts on another automotive retrospective 50 years from now, Sant’Agata should dust off up this Arancio Xanto press car. Tame but wild, in many ways it’s the quintessential modern Lambo. 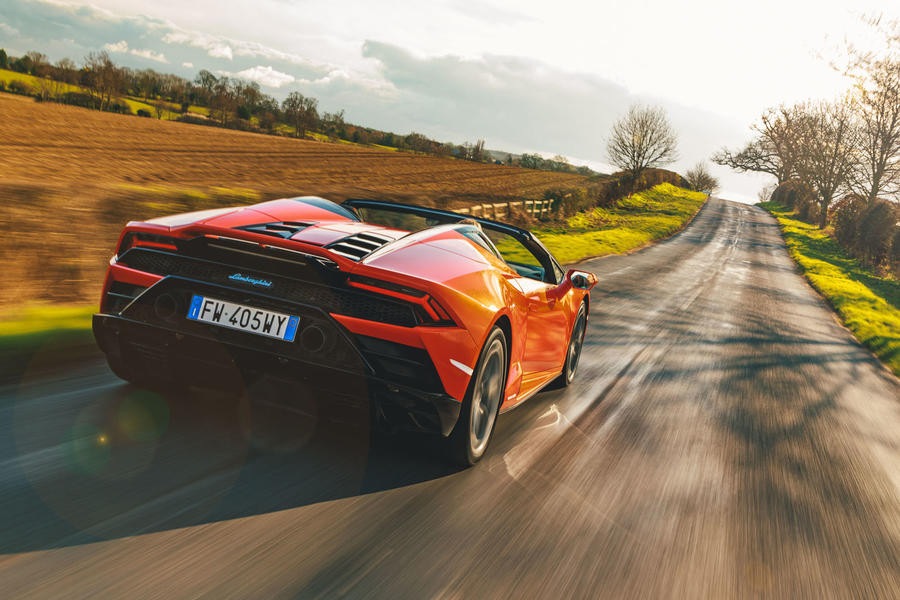 Nothing further to add

Just stunning. What time do you get up in the mornings Peter?!
You keep stealing my thunder!
Deputy 12 May 2020

Would be amazing to drive one from my home in Yorkshire to Italy and back.  Would be a mix of 4 days amazing driving and about 12 weeks in various countries quarantine......

I've driven one also, and a McLaren, and I'd say the Huaracan was easier to drive, good feel through the steering, brakes were progressive and easy modulated and to cap it all it sounded absolutely awesome, the McLaren, well, it was clinical, like programming a computer, push this button, turn the nob,and I have to say not a roomy as the Lambo, so, yes, I agree, it may not be first choice, but it made me feel good for a while.