From £30,9709
Subtle revisions help one of our favourite quick saloons to remain current in 2021
Open gallery
Close

Were you to list the unexpected four-wheeled gems we’ve been given over the past few years, some names would spill freely from your mind. The Alpine A110 first, probably followed by the Toyota GR Yaris. After that, possibly the Ariel Atom 4, which we always knew was going to be epic fun but could never have predicted just how well executed the Somerset Exocet would turn out to be at the fourth (well, fifth) time of asking.

Your memory might flail around after that, but eventually it would recall the Kia Stinger GT S. What a nice surprise that was. When it arrived in 2017, this was nothing less than the first rear-driven car Kia had ever sold in this country, and it broke that duck in style.

An elegant four-door fastback in the manner of the BMW 4 Series Gran Coupé and Audi S5 Sportback, albeit marginally larger than either in footprint, the GT S had a 3.3-litre twin-turbo V6 that made 365bhp and delivered it to the rear wheels through the standard-fit mechanical limited-slip differential. It accelerated to 62mph in comfortably under five seconds, it could hit almost 170mph flat out, and the dynamic characteristics had been signed off by renowned engineer Albert Biermann, fresh from three decades at the helm of BMW M. You could also buy one and have change from £41,000, which made it exceptional value for money, for those sagacious enough to put badge-snobbery to one side.

More than anything else, the GT S served as the one thing Kia had never really had: a true halo model. It’s why, despite only modest demand over the past four years, the car, still of distinctly old-school flavour, has been updated for 2021 and will stay on sale for years yet, albeit now as a stand-alone model. Kia has dropped the 2.0-litre turbo petrol and 2.2-litre diesel engines of the more sedate GT-Line Stingers. And on a similar note, while the full-bore GT S employs all-wheel drive in LHD markets, over here it remains rear driveshafts only, for reasons relating to packaging.

The updates are subtle. Most obvious is the new light bar connecting the tail-lights. The four exhaust tips are now larger, too, and Kia has restyled the diffuser. Elsewhere, the standard-fit red Brembo brake calipers now peek out from behind a new design of 19in wheel, and the LED headlights have also been tweaked. However, while the air curtains at the edges of the front bumpers and the gills slightly aft of the front wheel arches remain functional, the nostril vents in the long bonnet are still purely cosmetic. The Stinger also retains its unusual coppery-chrome trim.

As for the mechanicals, the 3.3-litre motor is actually less powerful than before, although really this emissions-related change came about before the facelift, and at 4bhp, the deficit is minimal in the context of something that weighs 1855kg.

Yes, it’s still a big old beast, the GT S, and only 10kg lighter than a BMW M5 Competition. Elsewhere, the adaptive dampers have been retuned to be a little more forgiving across the board, but at the same time Kia claims to have achieved a “slight reduction” in understeer. That could be the result of geometry changes, or damping response, but I’d wager it’s mostly down to the most significant chassis tweak of all: the switching of Continental’s Sport Contact 5 tyres for a set of Michelin Pilot Sport 4S.

Rounding off the changes is a subtle revision to the electric power steering (where the motor is still mounted on the rack rather than the column, for less corruption). In Sport mode, the level of assistance has not been dialled back, as you might expect, but increased, although the action in the original Stinger GT S had plenty of heft to spare. 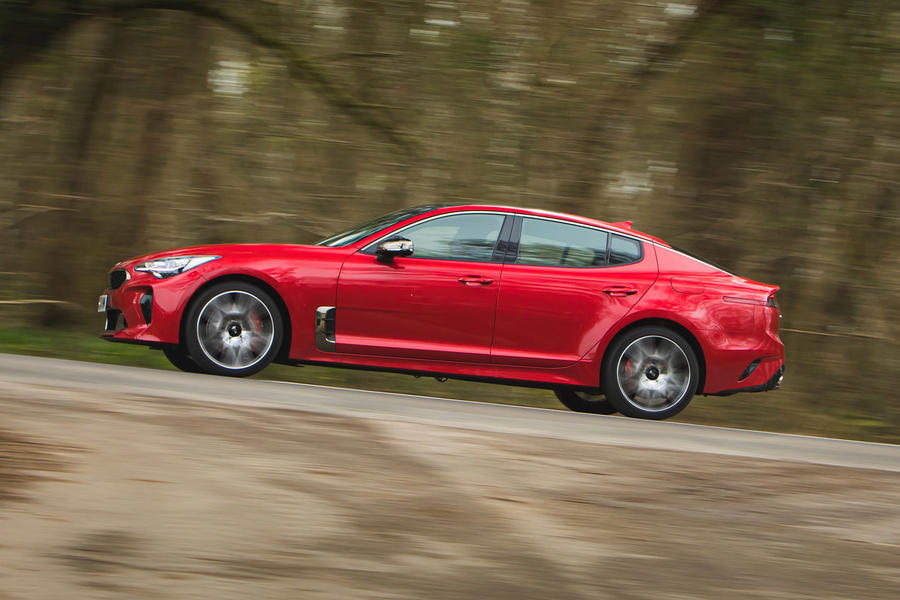 Inside, it is similarly much as before, although perceived quality seems higher now than on the earlier cars and the nappa leather seats are even more sumptuous and inviting for hours-long drives, placing you low and snug behind the high scuttle.

In here, you’ll also find clear analogue dials, neatly positioned vents, just the right amount of switchgear and a massively improved 10.3in infotainment touchscreen. It is all befitting – and then some – of the Stinger’s price, which at £42,595 has hardly risen at all.

Five minutes behind the wheel of the facelifted model is enough to remind you why the GT S was received so warmly in 2017. There’s still an obvious natural harmony that exists between this car’s loping but far from lethargic gait, the measured but precise response and surprisingly detailed feel in the steering, and the poise in the chassis when you balance it with the engine’s ample torque.

And a generous but sensible level of performance. Even though this isn’t the most joyful V6 ever conceived (despite the surprisingly convincing efforts of the speakers), you can stay on the throttle with the Stinger GT S without it tearing into triple-figure speeds before you realise what’s going on. Like an M5 Comp does.

What you can’t escape is the size of the thing on smaller B-roads, where choppier stretches uncover the limits of the suspension’s composure in short order. The body floats, and past a certain point each wheel can also be too busy sorting itself out to contribute neatly to the bigger dynamic picture. It’s one of the few environments where, say, an S5 Sportback or a Jaguar XF has more talent and sophistication to fall back on. And in fairness, it’s an environment the Stinger GT S isn’t intended for.

It’s most at home on smooth, meandering A-roads, where it’ll make fluid and stately progress, but for a decibel or two more tyre roar than you’d want from something with genuine GT pretensions.

As for less understeer? Believe it. Of the driving modes selectable via the rotary dial atop the transmission tunnel, the most aggressive culls the traction control but keeps the ESP.

It reveals the tail end of the Stinger to be progressive and stable at the limit, to the extent that you can just pick your moments in second or third gear and open the steering anywhere between three or four degrees and half an armful. The long wheelbase helps make movements predictable, but the in-house limited-slip differential works well, too. 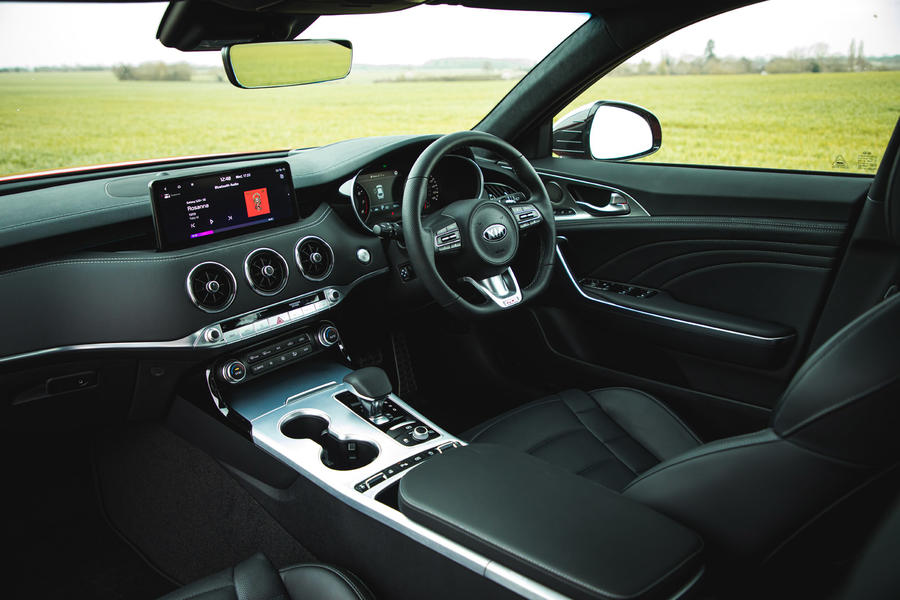 This remains an honest and confidence-inspiring car; one that rather than tolerating you, wants and needs you to get involved, which is a trait that feels increasingly rare at this level. And we shouldn’t ignore what an accomplished fastback the GT S is elsewhere.

Spacious and comfortable, the car now has the infotainment array it deserves, and a level of perceived quality that outstrips the asking price. This Kia remains an unexpected gem. 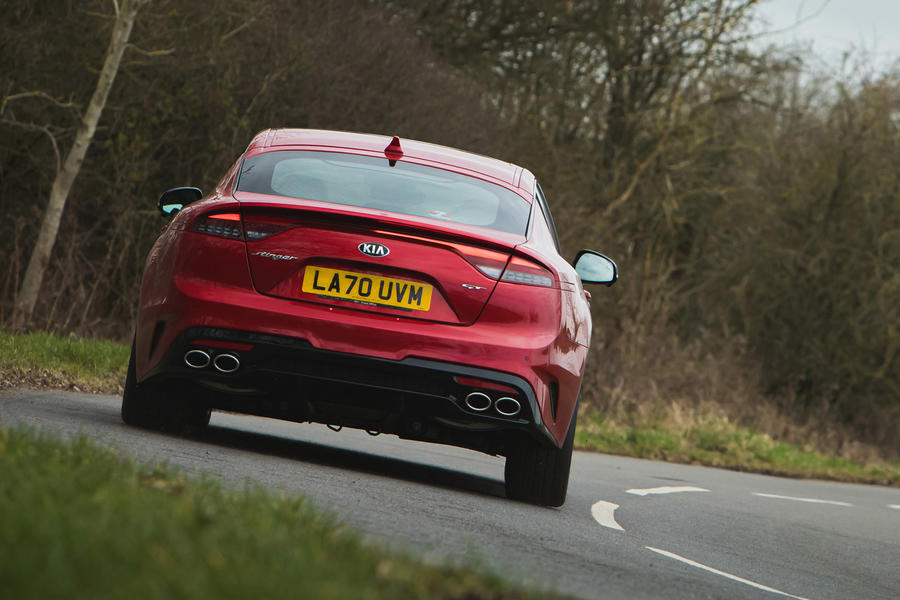 Log in or register to post comments
abkq 24 March 2021
Yes but what about Genesis, Stinger's laid back and comfort oriented sister car? Is that going to be imported?
Old But not yet Dead 24 March 2021
Agree with all the complimentary remarks, it appears an excellent car for a good price.
I take issue with the marketing though. To compete with the snob values attached to C class, 3 series, etc a better naming convention is needed. Stinger is not sustainable over many series models and decades. A name like Stinger will date this car,especially in the used market,which also affects Lease and PCP deals. Shame.
artill 24 March 2021

It remains a great looking car, inside and out.  For it to appeal to me, a manual box would be needed, but for those happy with an auto, its a great car, at a pretty decent price. Shame they had to put the price up, so it now gets caught with the higher road tax, but thats more the fault of the Government for increasing the threshold.

It remains a great looking car, inside and out.  For it to appeal to me, a manual box would be needed, but for those happy with an auto, its a great car, at a pretty decent price. Shame they had to put the price up, so it now gets caught with the higher road tax, but thats more the fault of the Government for increasing the threshold.

If you buy a car like this new, an extra £325 per year is surely the least of your running cost worries.