From £30,9707
Entry-level petrol version of Kia’s ‘disrupter’ executive GT has a driving experience with much to recommend. It may not be faultless, but it's well priced and likeable
Open gallery
Close

The Kia Stinger may be many remarkable things: a brand-building, visually jaw-dropping rear-driven grand tourer the likes of which we’ve never seen from any Korean car maker. If you’ve read that before, it’s only because we’ve been told it before. A lot.

And yet, on one level, you always knew it was going to be a rule-breaker as well: a car priced in incendiary fashion to make a mockery of the value propositions of other rear-driven executive saloons, mostly made in Germany. Welcome to that level. This is the cheapest Stinger of the bunch: the turbocharged 2.0-litre entry-level model, which undercuts a like-for-like BMW 430i Gran Coupé by almost £8000 and even Volkswagen’s like-for-like Arteon by a similarly hefty wedge.

So far, Kia’s been careful to ensure our early experiences of its ambitious new design hero have been delivered by the 365bhp twin-turbo V6 model, and those preliminary tastes have been promising. But the greater affordability of this Stinger could potentially bring it to many more owners and allow it to exercise a much wider and more powerful influence on the recasting of Kia’s brand image. Assuming it’s of sufficiently high calibre, of course – and in entry-level, passively damped, four-cylinder form at that. 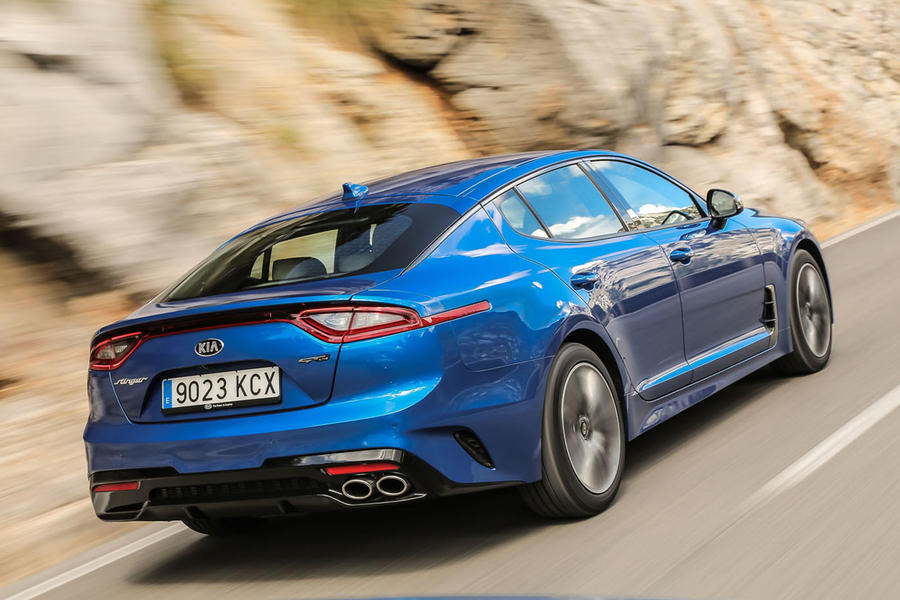 The 2.0-litre T-GDI Stinger will differ in its UK-market specification from the form in which US and European customers will get it as a result of an exhaust redesign necessary to package the car’s catalysts alongside a right-hand-drive steering column. An unavoidable increase in back pressure is the reason why, elsewhere in the world, this version of the car develops 252bhp but in right-hand-drive markets only makes 244bhp.

But that’s still significantly more power than £32,000 buys in any other rear-driven executive option. And it comes packaged with the Stinger’s evident good looks, let’s not forget, as well as a standard specification offering that includes an eight-speed automatic gearbox, an 8.0in touchscreen infotainment system, head-up display, 18in alloy wheels, leather upholstery and a proper mechanical limited-slip differential for its driven rear axle.

At this price level, the Stinger’s cabin quality would certainly give you less cause for complaint than it would had you spent upwards of £40,000 on the car. It’s not that Kia’s cabin plastics look or feel particularly cheap; more that its attempts to make this driving environment seem desirable and expensive as often as not fall flat on their face.

The Stinger’s upper dashboard and upper doorcards are made of moulded plastic that do an unconvincing impression of leather. Lower down, Kia’s use of textured aluminium is more effective, but defaulting to glossy black trim around much of the centre console shows a lack of imagination and gives the Stinger’s cabin a slightly drab, monochrome ambience.

There’s little wrong with the way the car’s 8.0in infotainment system works or the audio quality of its nine-speaker stereo system – but neither is at the level you’d expect of a true premium-brand contender.

The car’s driving position is low and enveloping, though. And, on the road, that four-cylinder engine does a very respectable job of motivating this, the lightest of Stinger, with a crisp and vigorous kind of mid-range thrust. That engine also has an appetite for revs that you wouldn’t call rapacious but that does make it worthwhile holding onto a gear when you’re in the mood.

The Stinger is brisk and peppy when pulling from 3000-5000rpm, but doesn’t always feel hot-hatch fast. It deserves a better transmission than the eight-speed proprietary unit with which Kia couples it, truth be told. This gearbox doesn’t have a properly locked-out paddleshift manual mode and isn’t quick or decisive enough about its downshifts in automatic mode. 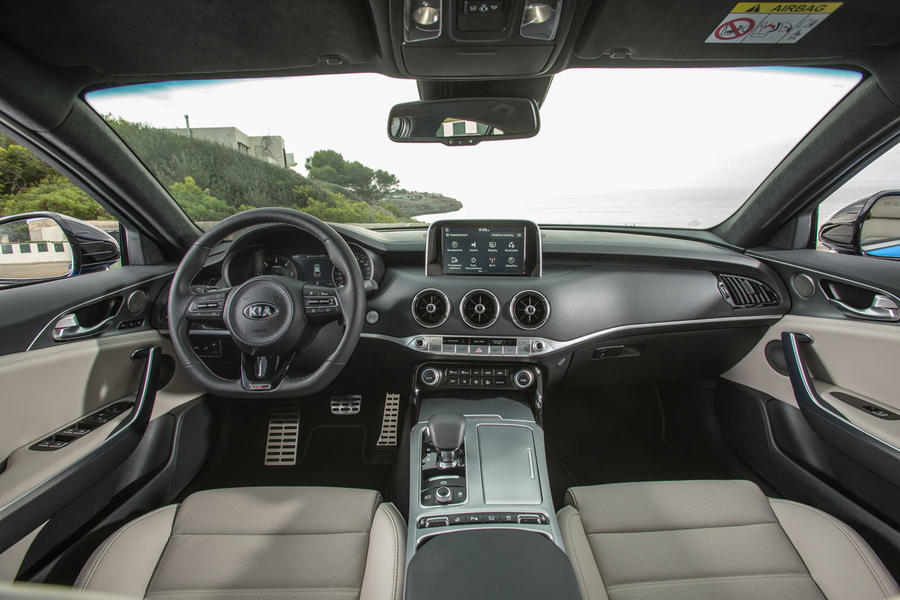 The Stinger’s ride and handling should remain the most decisive factors in attracting new buyers into the Kia fold. Even on 18in alloy wheels and with standard passively damped suspension, the Stinger has a pliant and supple ride that copes with small bumps and large equally well.

It also handles with a skilfully tuned blend of well-balanced grip, settled and dependable body control and keenish directional agility. At times, the car could steer a little more predictably; at other times, you’ll curse that slightly mannered automatic gearbox for not giving you the simpler and more direct relationship with the car’s driven axle that you crave.

But there is certainly the pace, poise and handling character of a very respectable junior sport saloon here, and there's plenty to enjoy for keener drivers who are willing to accept this car for what it is and stomach one or two compromises for a bargain price. 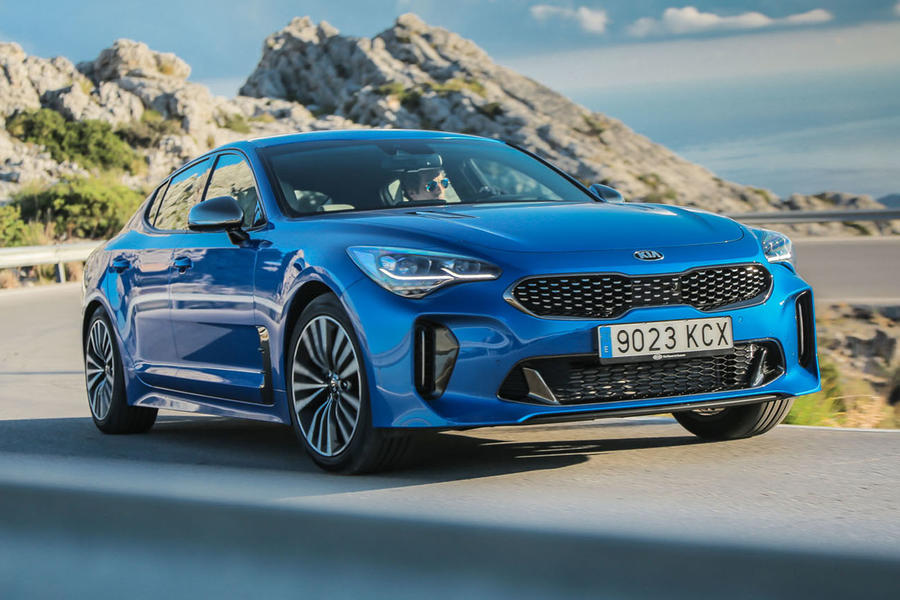 I am sure it is fine. From the report Plastics kinda OK, fit OK, pretty good turn of speed if not electrifying , design OK. Everyone will probably find it is ok.

If autocar is so bias, why on earth do some of the commentators on the forum read it? Seems like a waste of your time to me. Unless being outraged some sort of sport? Oh well, whatever floats your boat and makes you happy. I certainly enjoy reading your comments and look out for them on certain brand reviews.

I admit, I don't like jukes, no rational reason, I just don't like them. Nasty looking affected things. Yet I will still read the reviews. Same type of behaviour I suppose.

Utterly predicatable review. Oooh, let's not upset the German premium brands, so a 3.5 it will be.

Well if it’s jaw dropping it should be called the Kia Nell, for the obvious exclamation ...

Well if it’s jaw dropping it should be called the Kia Nell, for the obvious exclamation ...