Although Hyundai’s i30 Tourer slots into a segment that has seen demand rocket by 40% since 2014, it does so with estate versions of the Vauxhall Astra, Ford Focus and Volkswagen Golf as rivals. That’s not an easy bunch to beat.

Hyundai fancies its chances so has gone aggressive with a generous specifications list and attractive entry price of £17,495. It also claims that this is a model that lovers of driving can enjoy because, like the rest of the i30 range, the Tourer spent much of its development charging around the Nürburgring.

This is an estate, though, so it’s often the back-end that decides whether the battle is won or lost. The i30 Tourer has 602 litres of boot space with the rear seats up or 1650 litres with them down. That latter figure beats the largest of its rivals, the Golf estate, by 30 litres, and it is also 309 litres more than the five-door i30 hatch offers. Good start, then. 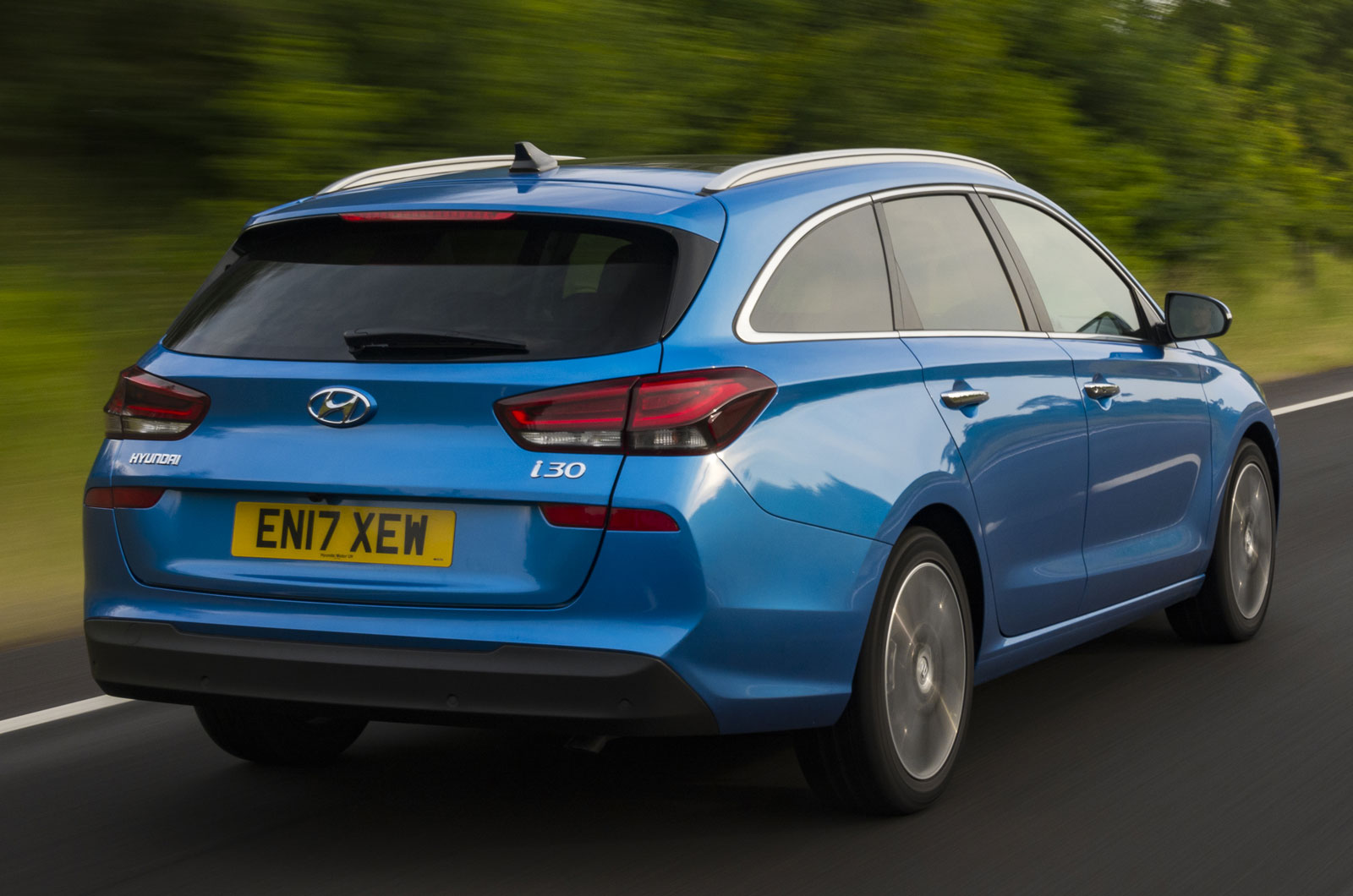 To accommodate that larger boot, the Tourer gets an elongated profile that makes for a sleeker design than the hatch. While not particularly eye-catching, it’s a smart look. Inside, the cabin is identical to the hatch, which means it gets a clutter-free centre console and 5.0in or optional 8.0in touchscreen infotainment, available with Apple CarPlay and Android Auto, as well as 3D satnav.

Under the bonnet comes a choice of turbocharged engines, with a 1.0-litre three-cylinder petrol producing 118bhp at the entry level and a 1.6-litre four-cylinder diesel with 131bhp the priciest unit. For our test, we’re driving the mid-range 1.4-litre petrol T-GDI that has 138bhp.

The Nürburgring tag is thrown around so often these days that it has almost become meaningless but, in the i30, there is some sign of it having had a positive effect on dynamics and ride. The i30 Tourer is supple and smooth, yet also well damped and quick to respond to undulations, making it feel confident on the motorway and not opposed to being driven at pace on B-roads.

Our car’s 1.4 four-pot makes it good for a 0-62mph time of 9.2sec and a top speed of 130mph. It feels every bit as nippy as those stats suggest and makes for a surprisingly effective motorway cruiser, thanks in part to the arrival of 178lb ft from 1500rpm. But on our run, the petrol unit could only average 40mpg – more than 10mpg short of its claimed combined economy.

We would opt for the six-speed manual as it seems to unlock the engine's maximum potential, but those who do go for the optional seven-speed dual-clutch auto will at least enjoy quick gear changes, albeit with a less punchy power band.

Hyundai claims the i30 Tourer has the most driver assist programmes available in its class, and the range-topping Premium SE model tested here certainly stands in good stead to back that. It gets blind spot detection, driver attention and lane departure warning technology as part of its armoury. It also gets cruise control and lane keep assist as standard, which makes long-distance driving substantially less tiring. This is helped by good refinement, with road noise kept to such a low volume that, on this first go at least, it feels as if the i30 Tourer could give the Golf estate a run for its money in this department. Wind noise is also impressively low, with only a slight amount being audible at motorway pace from around the door mirrors. That’s particularly impressive considering the SE Premium gets a panoramic sunroof - something that can hinder soundproofing in rivals.

The chairs in our car are wrapped in perforated leather and mix good lumber support with wide ranging adjustability. Space in the back is also good, although our car only features one USB charging point for the front – a potential negative for those with children to transport. The car’s six-speaker sound system is impressive, however, and flaunts nifty tech that only plays the satnav voice guidance to passengers in the front seats.

A few marks are lost for the cabin’s hard touch, grey plastics, which are located on sections of the dash and touch points of the doors. They drag down the appearance of what is in essence a nicely designed interior. Thankfully, the driver’s main touch points – the steering wheel and gear lever – are wrapped in leather and therefore feel far more premium. 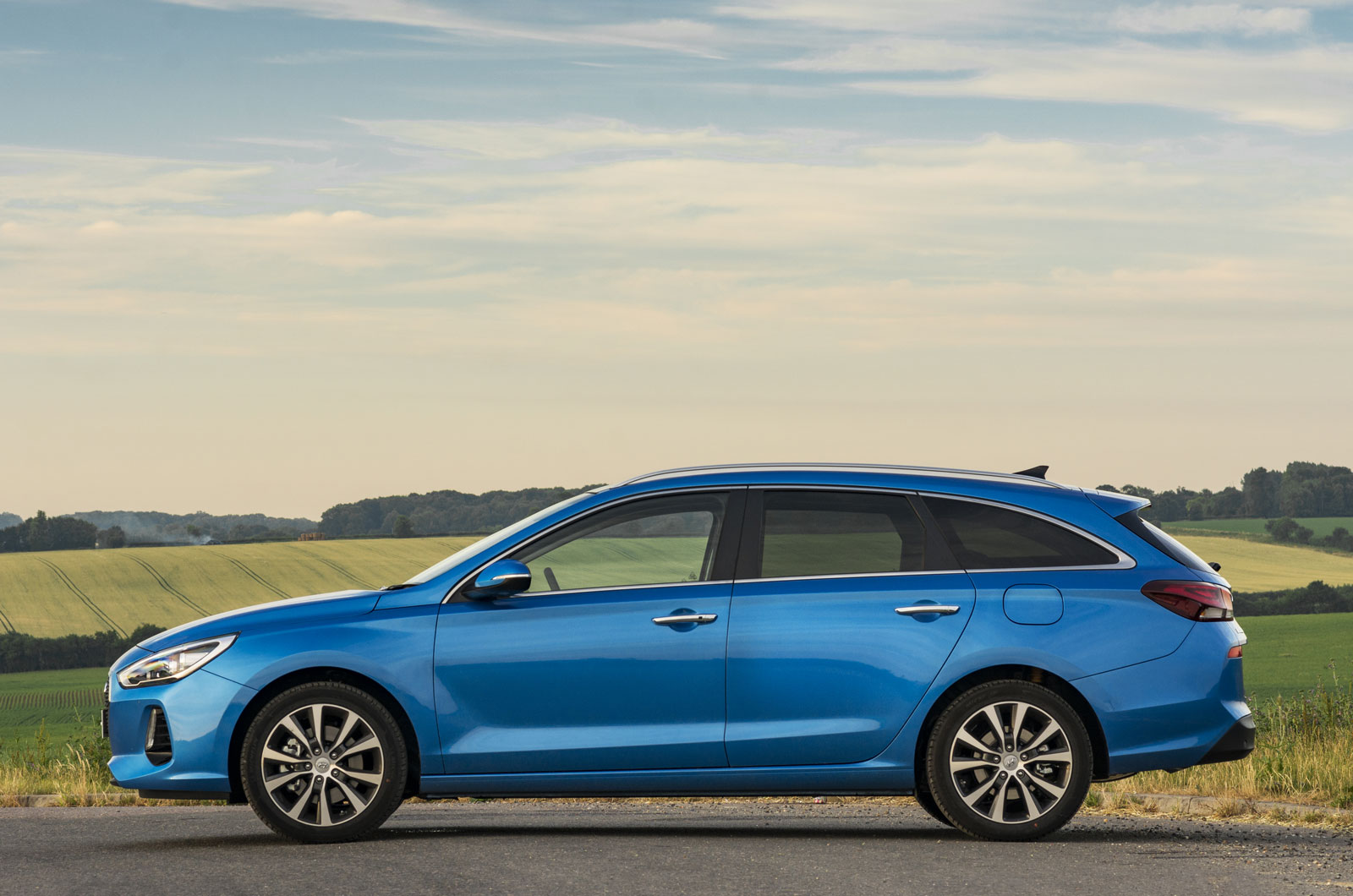 The Hyundai i30 Tourer is generously equipped, refined and comfortable to drive, especially in top-spec. But our 1.4-litre Premium SE costs £24,740 once the option of metallic paint is added, which means it faces similarly high-ranking versions of the Golf estate – which is tough given that car arguably has a more beguiling badge.

The i30 Tourer’s lenghtier list of standard driver assist features may help, however, making it as pleasant a space to spend time as any other car in this class. While it lacks the individuality or desirability a car would need to excel against rivals, it scores well for practicality and overall quality, making it a smart and mature option.

Has demand for C segment estates really rocketed by 40% over the last twelve months? Why is that then, crossovers proving unsatisfactory? Nice car this.

Why even list a Focus estate as an option, a Titanium X with leather(£600) and an over worked 1.0 engine is £24,600 and I don't even think you get Sat Nav (another £600????)  Ford are having trouble shifting these cars at moment and have started offeringn big discounts, so buyer beware!

Far more preferable to a

Far more preferable to a dreary old Golf, will more than likely trounce the Golf for reliability as well

Unless I'm missing something,

Unless I'm missing something, this Hyundai costs £ 5k more than the new Insignia estate reviewed here:

Now, OK, the Hyunadia is the top of the range model, the Insignia one from bottom, but the outright kit list is little different, the Insignia is a larger car which means more space - usually a consideration for an estate buyer.

So, not wishing to be funny - how can Hyundai justify £ 25k for this? That said the same point can be made about the Golf estate.