From £10,0308
Share review
Well-equipped city car is composed and even (whisper it) entertaining on UK roads
Share
Open gallery
Close

Hyundai’s humble city car enters its third generation considerably less humble than the version it replaces. But then it had to be.

In the seven years the previous model has been on sale, the entire concept of what a small car needs to be has evolved. Small, nimble and affordable isn’t enough; now customers expect active safety aids and technology that puts their smartphones to shame. Oh, and if it could not look like a boring econo-box, that’d be great.

So the i10 has grown up, with more eye-catching styling that borrows just as much from Hyundai’s larger cars as it does from the outgoing model. The distinctive front grille still hides the foglights as before, but the wheelbase has been stretched and body widened to give it a more purposeful look.

It also affords front and rear passengers a bit of extra room in the modernised interior, which has filtered down from higher up in the range. An 8.0in touchscreen is standard on mid-spec SE Connect cars and above - the biggest you’ll find in any city car, according to Hyundai. Navigation is only included with the optional £1000 Tech Pack, which also adds goodies such as wireless phone charging and traffic sign recognition, but with Android Auto and Apple CarPlay support, it doesn’t feel like a necessity. Elsewhere, our top-spec Premium model gains heated front seats, a heated steering wheel and LED daytime running lights.

The one thing that hasn’t evolved is the engine. While the Volkswagen e-Up, Skoda Citigo-e and Seat Mii have all embraced electric motors, the i10 is sticking with a choice of two combustion engines. This 1.2-litre four-pot is the most powerful - at least until the i10 N-Line arrives later this year with a turbocharged 1.0-litre triple. 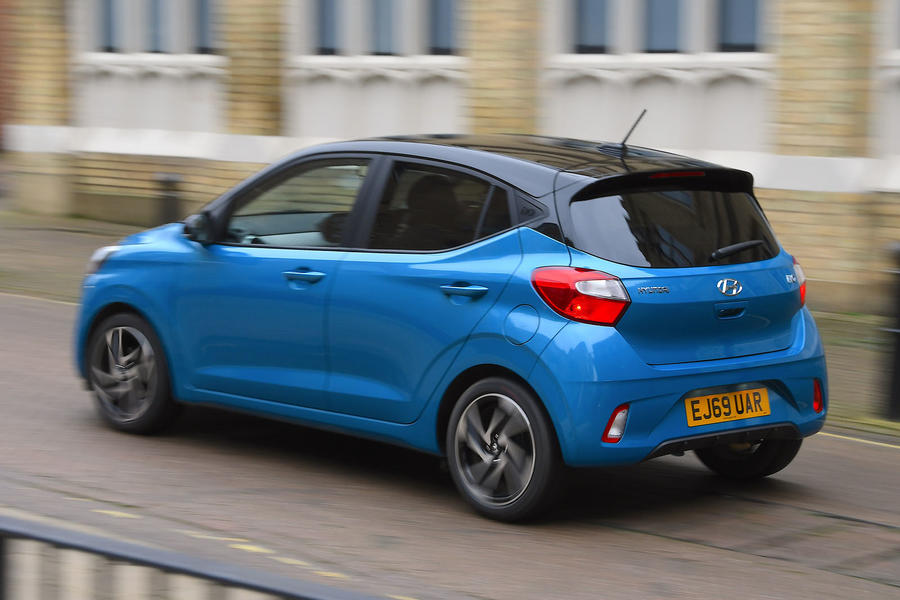 It's perfectly happy in the environment for which it was designed, and refreshingly capable away from it.  Unlike the lesser-powered 1.0-litre car we spent time with on the Continent earlier this year, the more potent 1.2 doesn’t feel out of place once you find faster roads away from the town centre. Overtakes still take planning (and a downshift or two), but motorways aren’t the no-go zones they can feel like in some city cars.

The 1.2 feels more relaxed at slower speeds, as you don’t need to thrash it quite so hard to keep up with the flow of traffic, and for the most part it doesn’t make its presence felt inside the cabin. Stop-start traffic does highlight the rather high clutch bite point and a need to feed in more revs than you’d think to avoid stalling, though.

Light steering and a tight turning circle are par for the course for any city car, but the i10 manages both without compromising higher-speed stability. Things weight up progressively and respond directly to your inputs, but push on through corners and the chassis isn’t quite as eager to play as more focused superminis. It’s still an improvement on the outgoing car and isn’t short on fun when you find the right roads.

More impressive is the ride, which is easily among the best of any city car. Even on 16in wheels, it copes well with pockmarked roads and uneven surfaces. While it can’t claim to best the comfort of superminis such as the Vauxhall Corsa, it does give some other cars in the class above a run for their money. 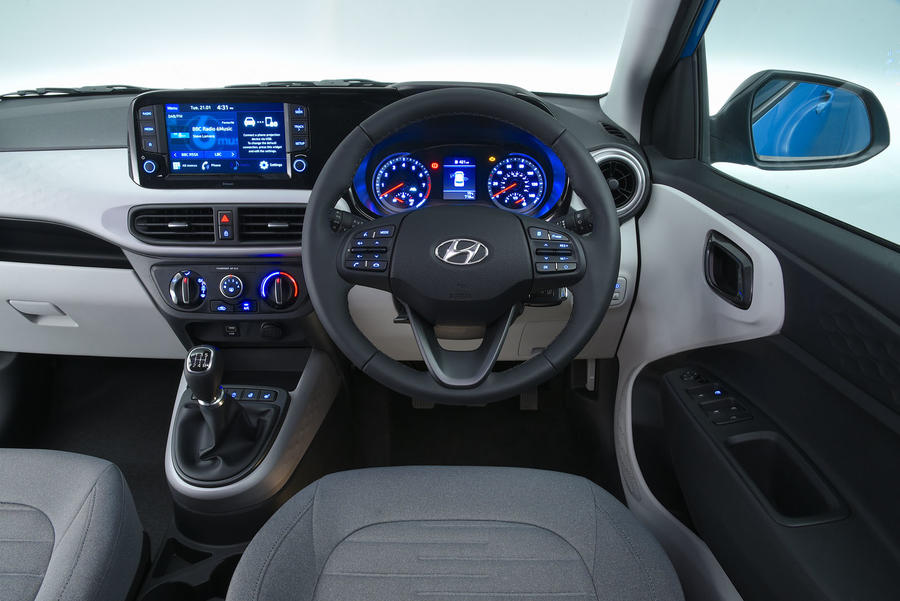 Anyone looking for a capable and well-equipped city car would be wise to put the i10 on their shortlist. And while Hyundai may expect the 1.0-litre models to sell in bigger numbers, this 1.2 feels more at ease outside of city limits.

It looks the part, handles well enough for the class and makes fewer interior compromises than its rivals. But then you’d expect as much, given the price. At £14,995, it’s already nudging close to supermini territory, and that’s before you include the £1000 Tech Pack that adds much of what makes the cabin such an upgrade over other city cars.

You should still be able to put one on your drive for less than £200 a month. Just keep in mind that stepping up to the class above isn’t going to set you back a huge amount more.

Tim Ford clearly cannot read carefully either. Read the data at the bottom of the article. "4cyls,1197CC  turbo petrol"

You are correct I didn’t read it because I already know that it doesn’t have a turbo and I accept that errors occur which clearly you don’t (errors and omissions accepted)!!
Tim Ford 6 February 2020

Priced about right?! Are you kidding?!

This is the smallest class of car on the market, built to a cost that reflects compromised, supposedly cheap, motoring.

Regardless of the good qualities of the new model, and that includes a lot of tech and options that some people don't want or need as it's just something else to go wrong, the car isn't substantially bigger, the boot is the same size, the interior (whilst redesigned) is still constructed of cheap plastics and the engines are exactly the same! So why are people saying it's good value?! Hyundai don't even offer attractive servicing packages any more either!

Also, pushing the 'well equipped" top spec model to one side (that still demands you pay a lot extra for tech that the car is advertised with, and things like metallic paint as usual) the base model has increased by over £3000 from the outgoing model, and no amount of trim level renaming is going to hide that - 'S' becomes 'SE' but it still has steel wheels for example.Comparing to prices of cars from the class above is ridiculous too - as not only are they much bigger, more powerful and drive better, they have undergone a ridiculous leap in extortionate pricing too. It's like deciding to pay £50 for an apple as it looks good value when comparing to someone selling melons for £100.

Maybe quite a few people who work at, or own, car dealerships are posting here.

Didn't say good value, just priced about right, which is compared with its competitors, ie up etc. Agree all cars have had a massive price rise over their predecessors. My wife's Mii is a top spec mango and is very plush for a city car with alcantara and faux leather upholstery embossed with its brand etc, but its new price wouldn't even get a base up now and the Mii is ev only. So I agree all cars seem more expensive but this i10 is priced about right compared with others in its class.
View all comments (9)