From £10,0306
Share review
Gets the turbocharged engine the i10 always needed, but styling revisions, performance enhancements and a price it could do without
Open gallery
Close

The i10 N Line adds turbo power to the car’s under-bonnet armoury for the first time for as long as there has been an i10. It’s powered by a 1.0-litre turbo three-pot petrol motor making 99bhp and 127lb ft of torque. Not quite enough, perhaps, for the car to stand alongside the slightly peppier and widely acclaimed Volkswagen Up GTI, but Hyundai clearly believes otherwise and has priced this car with ambition to go head to head with the VW.

Should it have? Well, sporty superminis have certainly been built on less. This car does have very shiny pedals and some jazzy red exterior styling parts, after all. It has gently overhauled suspension, too - stiffer coil springs, retuned dampers and new rear axle bump stops - and some snazzy 16in alloy wheels. And it also benefits from the generous hand with equipment and in-car tech that Hyundai lavishes on the i10 as a whole range; so it gets an 8.0in touchscreen infotainment system with smartphone mirroring for both Apple and Android phones as standard, as well as plenty of active safety features of the kind that you can imagine might well help sell a car like this.

Having said that, they’re also the things that might sell a much more modest £11,000, entry-level i10. So, besides the embellishments, how much more does this top-of-the-range version have going on? 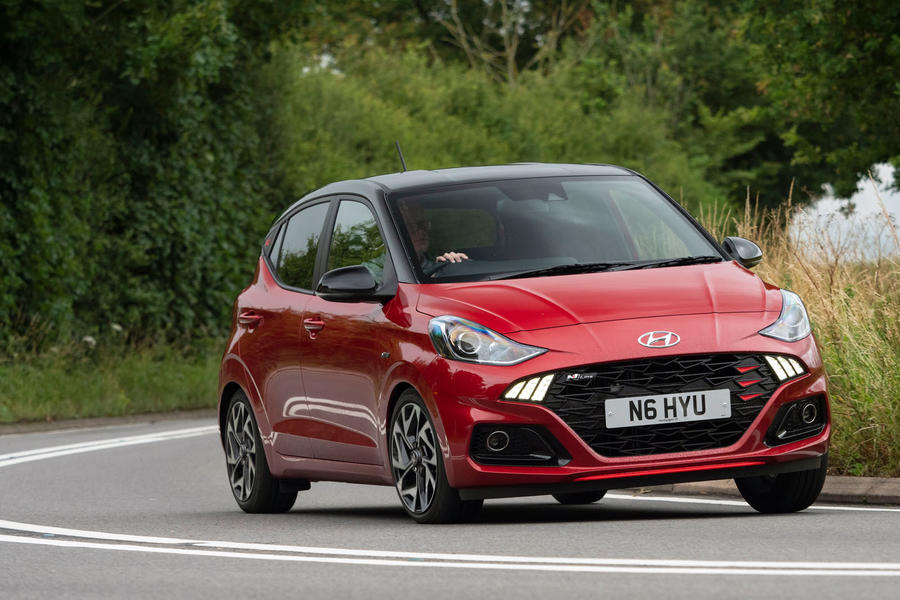 Those suspension changes add a thin but just-perceptible layer of extra body control and chassis response over and above the level of an ordinary i10; which, by city car standards, is a tidy-handling prospect, but doesn't offer much driver entertainment these days to those used to better-handling, full-sized superminis.

The N Line version offers only the very mildest sprinkling of extra sporting seasoning, then. It's competent and nice to rub along with, but to suggest that it grips, steers or corners in a way that smacks of a junior warm hatchback would be misleading.

The good news is that Hyundai’s rolling chassis changes haven’t compromised the i10’s ride comfort or urban drivability, both of which remain good. This is, in dynamically broad scope, an easy-going, well-sorted little car with an air of big-car sophistication about it that will carry you around from A to B agreeably - albeit with the merest edge of firmness about the ride over uneven surfaces.

That engine, meanwhile, adds welcome drivability for the car, but not the extra audible and textural fizz that anyone ‘cross-shopping’ with a VW Up GTI might hope to come with it. There's enough torque for at least a little urgency through the higher gears, which most city cars certainly don't offer. You wouldn’t go so far as to call the car’s performance ‘fun’, though, since the motor doesn’t spin beyond 5000rpm particularly freely and doesn't sound all that characterful. Beneath the new shiny gearknob, the shift quality of the car’s five-speed manual gearbox is respectable but no better.

Hyundai’s interior styling tweaks make the i10 N Line identifiable as an attempt at sporting flavour, but only just. The new N-branded seats are hardly any different from the car’s normal ones, no more adjustable and little more supportive. The chrome pedals, N-branded primary controls and red air vent adornments, meanwhile, are nice enough; although they do seem like the kind of additions so often reached for to make up for a ‘sporty’ driving experience that isn’t as clearly distinguished as it might be. 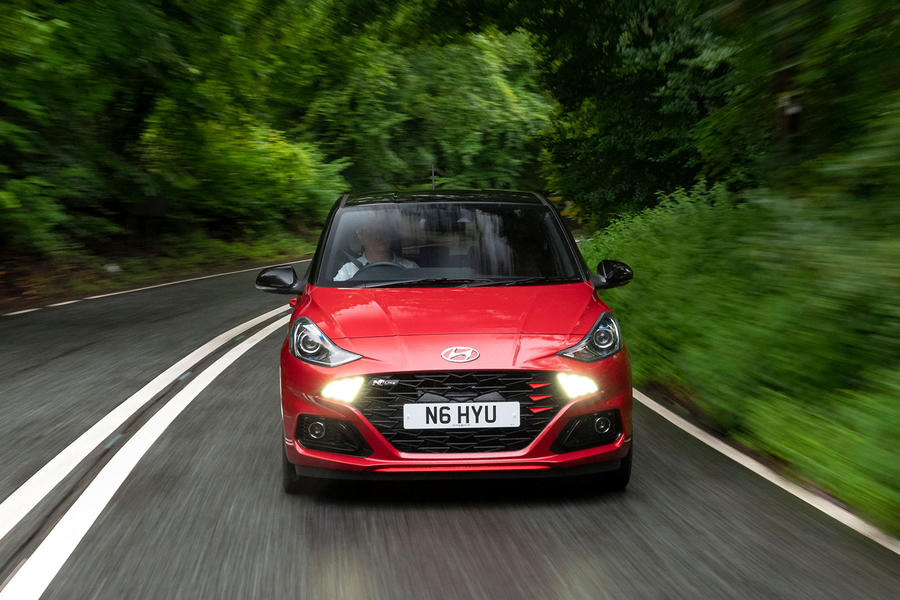 Well, the ingredients and characteristics we’ve just covered are what we might call ‘the trees’ for this car. And ‘the wood’ that the Hyundai product planners appear to have missed? That because Hyundai’s N brand doesn’t confer much desirability yet and the car’s design makeover is somewhat half-heated, none of these things makes it a credible alternative to the Up GTI. Except, perhaps, on a spreadsheet.

The N brand is, after all, only one fully fledged hot hatchback old as far as UK enthusiasts are concerned - and that car was by no means universally recognised as a world-beater. When VW put the GTI badge on an Up, it did so having developed an only marginally more compelling driving experience for the car than Hyundai has; but also with so many decades of investment having gone into what the GTI badge stands for, and knowing it would mean something to people. To put it another way, VW didn't forget to make a lot of very memorable driver’s cars first.

Having only driven this one N Line offering, I’ll admit that I’m not the greatest authority on them. Perhaps I just expected more of a 99bhp ‘bit of fun’ city car than it was really fair to (although, to me, the ‘fun’ part was what seemed to be missing).

But for Hyundai, in contrast to VW, it seems very early days to be sweating a performance sub-brand like this - to be using it to charge £2500 more for a top-end i10 than Kia charges for a Picanto with the very same engine - when that sub-brand is still very much in the process of being built. 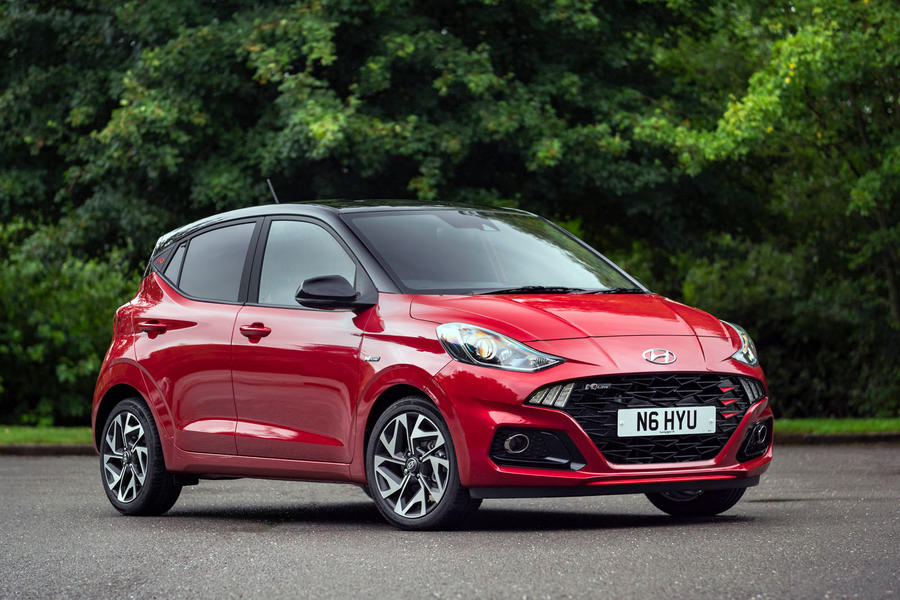 Another nail in the coffin for the overpriced i10 N Line

Roughly the same car but with a longer warranty for £1,800 less. Completely bonkers - I don't know what Hyundai are playing at but they've lost my custom, even though my current Hyundai has been great.

Would've been my next car

If it was £4,000 cheaper, and the dealership were willing to do a deal like they used to before acting like VW / Audi.