The Insight name returned to Honda’s American line-up for 2019 after five years away. This Prius challenger is far more conventional in looks than either of the previous Insights, however, and has creature comforts aplenty rather than a weight-saving, stripped-down interior.

Honda’s goal has been to create a “premium compact saloon”. The Insight Hybrid is being sold in the US, Canada and Japan, but there are no current plans to bring it to Europe. Stateside, it slots into the electrified range below the Accord Hybrid and Clarity Plug-In Hybrid.

The Insight rides on architecture from the Civic, which is the number-one-selling car in Canada and number two in the US, although both are heavily outsold by the most popular SUVs and trucks. It’s fitted with the third generation of Honda’s i-MMD multi-mode hybrid drive system – a very similar set-up to the one that impressed us in the CR-V Hybrid, but paired here with a 1.5-litre Atkinson-cycle four-cylinder rather than the 2.0-litre motor. 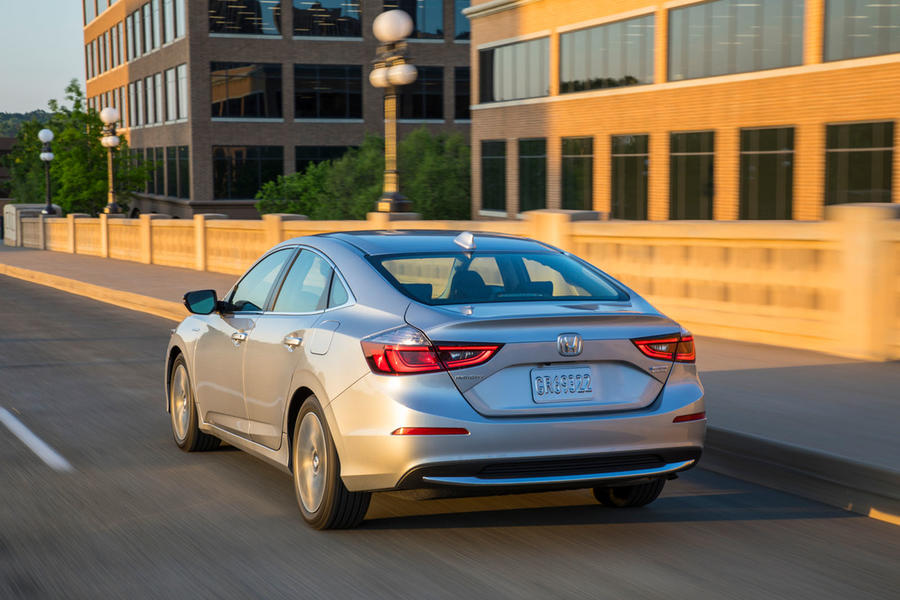 The Insight Hybrid consciously avoids polarising eco-car design cues and instead opts for sleek lines that are strongly reminiscent of the current Civic and Accord. When you compare the design with that of the no-compromise Clarity, the benefit is clear.

The theme continues inside, where there’s no Prius-style, space-age dash layout to immediately give the hybrid game away, just a discreet ‘EV mode’ button on the centre console – one of four available driving modes.

Otherwise the interior is spacious, comfortable and well appointed, especially in the range-topping Touring trim tested here. Honda’s comprehensive suite of driver-assistance systems is standard, including the LaneWatch blindspot cameras. That’s just as well because the regular door mirrors don’t have a wide enough range of adjustment.

The multi-mode drive system manages the transitions between the power sources very well, so much so that the combustion engine’s quietness at part throttle can fool you into thinking that you’re still running in EV mode. You do, however, really know about it when the motor is working hard, because the noise is loud and unpleasant.

The seemingly similar Normal and Eco drive modes are both fine around town but tend to run out of steam at motorway speeds, making Sport handy for a quick burst of acceleration if you pull out to overtake.

The Insight’s cabin is well isolated from the road surface, which keeps things nice and quiet both in EV mode around town and in the cruise. It rides comfortably, too, achieving a good compromise between body control that settles the car quickly after the humps and dips that are a feature of wide urban roads in North American cities, and a suppleness to suppress smaller inputs from potholes and manhole covers. Well-weighted steering (albeit without much feel) completes the refined, easy-to-drive picture. 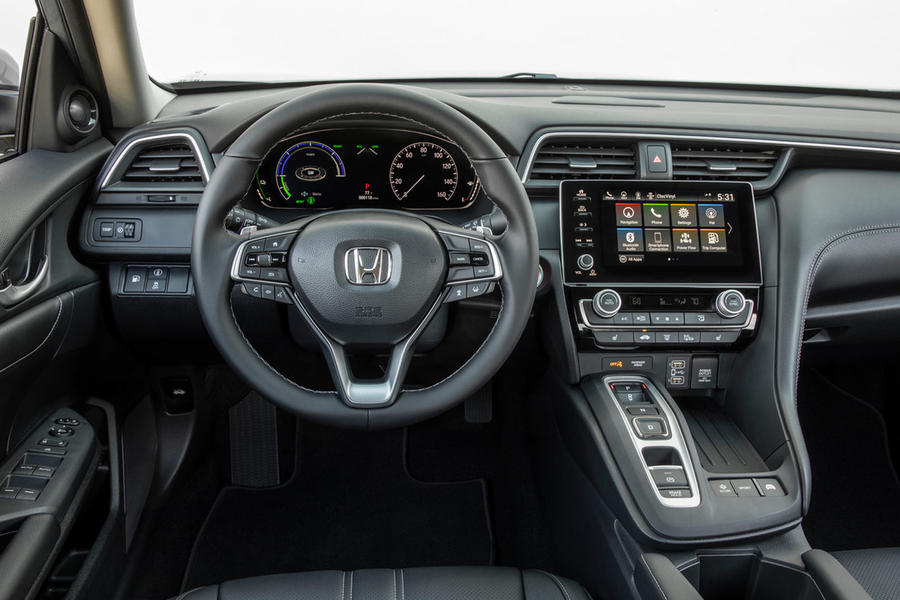 Here in Canada, the Insight Hybrid is priced at C$33,771 (about £20,000) in Touring trim, which is C$4,400 (£2,600) more than a Civic Touring. We got 51mpg in a week of mostly urban driving, 6mpg below the official combined consumption figure. For comparison, the Civic officially makes 40mpg combined. But with Canadian petrol prices currently as low as 59p per litre, depending on where you live, it could be 124,000 miles before you make your money back…

It’s a familiar problem for electrified vehicles seeking to break through in North America and one that won’t be solved without higher fuel prices or legislative restrictions on combustion-engine vehicles. That said, the Insight Hybrid is a well-rounded machine whose desire to keep things as normal as possible will attract customers outside of the minority of buyers who place environmental credentials at the top of their list. 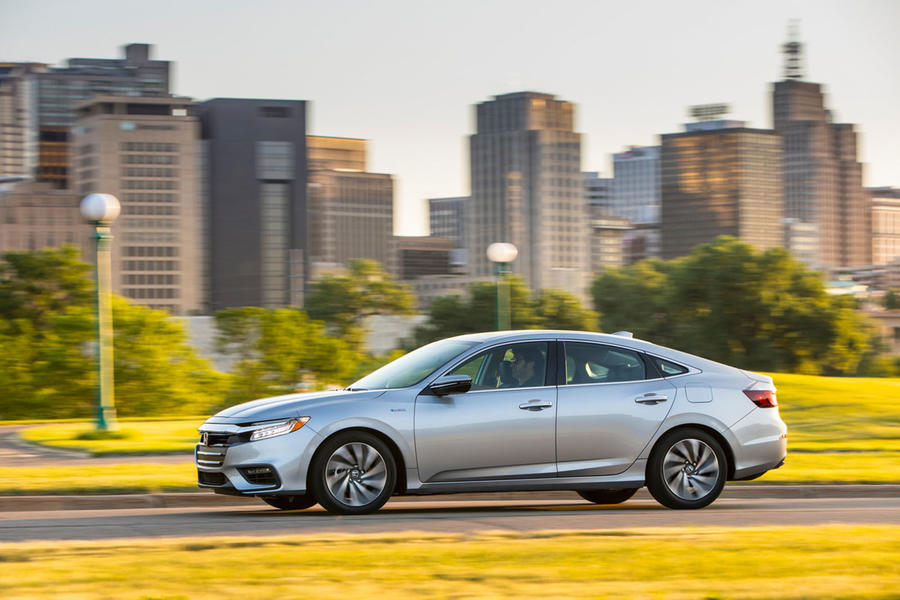 It's not a CVT, it's a hybrid system which works as a series hybrid when accelerating and a parallel one (with the engine and electric motor directly coupled to the wheels) when cruising.

And of course it is noisy at full throttle, because the system is holding the engine at the rpm at which maximum power is developed. If the noise is unacceptable, it's just a matter of backing off the throttle a bit to calm things down and accept a little less acceleration.

Why is it that motoring writers just don't understand the way cars work, so don't describe things properly?

Always happy to be corrected if I get my facts wrong! Story updated. Thanks for your vigilance!

When are Honda going to

When are Honda going to employ designers that can produce attractive looking cars again instead of the puke inducing rubbish they do now- no wonder their sales are falling.

Ugliest range of cars from a japanese mainstream maker ever.

Based on a Civic? I thought

25 June 2019
Based on a Civic? I thought it was a 4 door Civic. I literally cannot see any difference externally that is not badge based.

"depending on where you live, it could be 124,000 miles before you make your money back…" and in some ways that's all the Canadian needs to know. Other than a noisy unpleasant CVT sound under hard acceleration that is.

So, this new Insight is based on the latest Civic, shares much of its powertrain with the CRV (which is based on a version of the Civic's platform) and yet has its own unique styling that resembles the Civic (and Honda's other current generation saloons). Perhaps it'd have been easier and cheaper to simply place the Insight's powertrain in to the Civic.....

BMW has a point.

Yesterday I travelled from Heathrow to Manchester in my BMW 340i, the computer said my mpg was 51.9 at a speed of 59.6, I did drive carefully but the traffic controled my speed, for a six cylinder car that is excellent.

Great, but in my experience trip computers are not always accurate (my own two cars show optimistic readings of around 3 and 5 mpg versus careful brim to brim calculations). Also, I believe that yesterday there was a prevailing breeze from the south, which would make a difference at motorway speeds.

That's not to say your BMW isn't very efficient, but more than 50mpg from a big six cylinder engine does take some explaining!