From £20,7108
It’s not a cute coupe any more, but the new Puma compact crossover has retained a fair chunk of its predecessor's ability to entertain. And it has a Mega Box…
Open gallery
Close

This is the new Ford Puma, but not as we know it.

For those of a certain age, the Puma is an eye-catchingly styled compact coupé with a disproportionate ability to thrill when thrown down a stretch of twisting asphalt. However, the last one of those hit the road nearly 20 years ago, while for the youthful target market of the new car. the name 'Puma' is more likely to conjure up images of trainers and sports leisurewear than those of lithe little coupés. As a result, and rather predictably, that means the new Puma is an SUV, albeit a small one.

Yet there are reasons to be cheerful because, of all the mainstream manufacturers, Ford still knows how to engineer cars that entertain. In addition, the Puma is packed with some innovative kit to keep things interesting, including mild hybrid power, a suite of level 2 autonomous driver aids and something called the Mega Box, which we’ll get to shortly.

Sitting on the familiar Ford Global-B small car platform, the Puma is a relatively late entrant to the already fairly crowded compact crossover class, which includes the Nissan Juke, Seat Arona and Skoda Kamiq, among many. Yet the Blue Oval also has premium aspirations for the Puma (the entry-level trim is Titanium; there’s no Zetec here), pitching it head to head with the smaller but more upmarket Mini. Hmmmm.

Engine options are currently all petrol, with three versions of the 1.0-litre three-cylinder Ecoboost. The entry-level 123bhp unit is carried over from Ford Focus and Ford Fiesta largely unchanged, but the mild hybrid versions (with either 123 or 152bhp) are new for the Puma. Using a 48V and an 11.5kW starter/generator, it allows brief spurts of up to 37lb ft of torque-fill overboost.

The extra muscle is particularly useful low in the rev range, because it has allowed engineers to lower the compression ratio and add a bigger turbo for greater top-end power, on the 152bhp version at least. There’s also cylinder deactivation under light loads and on a closed throttle – a first on a three-pot motor.

The suspension is pretty much pure Fiesta, with struts at the front and a torsion beam at the rear. However, there are firmer springs and dampers, tougher bushes and new top mounts designed to reduce friction but increase stiffness. All of which is in line with Ford’s claim that the Puma will be the most dynamic car in its class.

Elsewhere, it’s all about the safety technology, with traffic jam and motorway assist bringing adaptive cruise control and lane-keeping to the sector; currently only the Renault Captur offers the same kit. There’s also automatic emergency braking with pedestrian and cyclist detection and cross-traffic alert, as well as various camera-based warning systems, self-parking and Evasive Steering Assist, which automatically helps steer the car around hazards if you’re caught napping.

And of course the Puma is ‘connected’. The 8.0in Sync 3 infotainment screen controls pretty much all the connectivity, sat-nav and audio functions, plus there’s the option of an in-built modem so you can host up to 10 devices (although while you’d want to is a moot point) on a wi-fi hotspot.

Oh, and not forgetting that Mega Box. What is it? Well, it’s deep 80-litre compartment beneath the boot floor that’s been designed to house everything from shopping to wetsuits. Made of moulded plastic and featuring a drain plug, it can genuinely be cleaned with a hose. It the sort of thing that you never knew you needed until you try it.

We’ve already had a go in the flagship ST Line with the 152bhp engine, so now it’s time for the entry-level Titanium with the lower-powered hybrid powerplant. 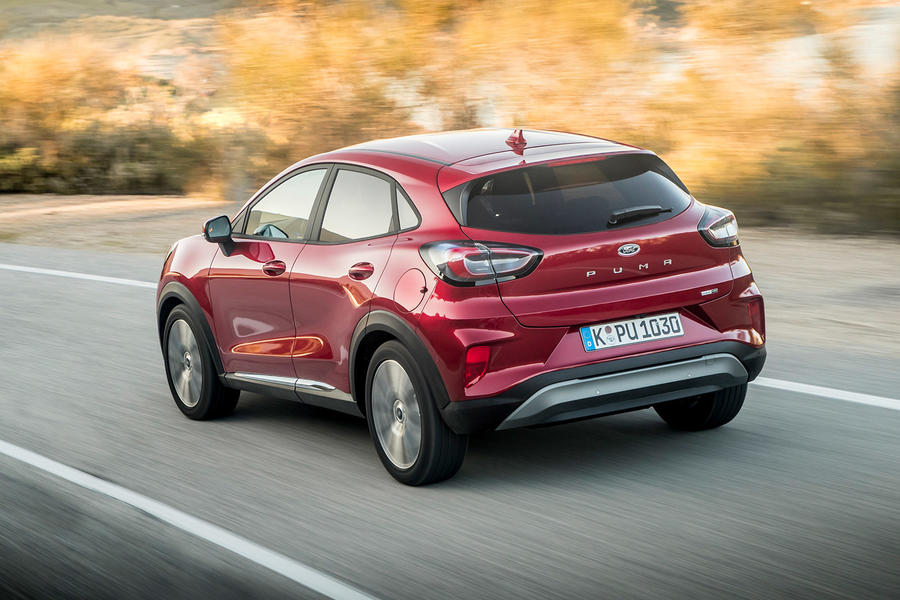 In the metal, the Puma is a surprisingly handsome thing. Sure, it isn't as pert as its 1990s namesake, but for a slightly blobby SUV-inspired crossover it’s neatly proportioned and has a tough stance. There’s more than a hint of Mazda CX-3 in its profile and the pinched waistline. You can even add 19in wheels, if you must.

Inside, it’s pretty much pure Fiesta, particularly the dashboard, with the protruding 8.0in touchscreen being carried over practically unchanged. The Puma does get a fully digital 12.3in instrument cluster in place of the Fiesta's analogue dials and small info screen, though. There are also some new trim inserts, including a wood-effect applique on the Titanium that clearly plays homage to the 1985 Ford Granada Ghia.

Quality is good, with soft-touch plastics on top of the dash, plus some nice fabric inserts in the doors. Yet there are also some hard materials lower down in the cabin, taking the wind out of Ford’s premium aspirations for the car. Still, everything works with slick precision, while the slightly raised (next to the Fiesta) driving position places you at the centre of the action. It’s roomy enough, too, although it’s worth bearing in mind that boot capacity shrinks from 456 to 401 litres on the hybrid models (well, that battery has to go somewhere).

The really good news, however, is that the Puma uses its Fiesta roots very effectively indeed; combined with the car’s relative width and wheel-at-each-corner stance, it delivers a properly engaging driving experience. Makers often sell these types of machines as being fun, but in the case of the Puma it really is. Not as much fun as the Fiesta on which it's based, but certainly it’s a whole lot more enjoyable than its immediate rivals.

Of course, it’s the chassis that shines the brightest, with the Puma slicing through corners with accuracy and poise. In fact, in the slightly softer Titanium, you get that same feeling of fluidity that used to mark out the best mainstream French cars, the damping doing an excellent job of blending control and comfort. Broken asphalt can reveal a touch of brittleness, but the rest of the time the Puma flows down the road, the suspension isolating you both physically and aurally from the topography.

The steering is light in its normal setting, while Sport brings a little extra heft. Regardless of setting, it’s got a lovely rate of response off the straight ahead, allowing you to pick a neat line through any corner, while there’s just enough feel. Front-end bite is strong, although push a little too hard and you can feel the torque vectoring nibbling away at the brakes to keep you on track. And while there’s some lean initially, the dampers quickly have everything under control.

Once you’re turned in, the Puma is much like a Fiesta, and that's a good thing. There’s the same sense that the car is pivoting around your hips, while shutting down the throttle mid-corner helps to usefully tighten your line. This is a compact crossover that gives you options, and one that’s diverting enough that you wouldn't feel short-changed after a romp over some testing roads.

The engine feels much like the more powerful version, meaning you get the same characterfully thrummy exhaust note and the extra boost of energy from that small electric motor, with an overboot facility that raises torque from 125lb ft to 148lb ft. It’s not a seamlessly integrated operation, but with the car in Sport mode, the sharper throttle helps mitigate some of the very low-speed off-boost and off-electricity lethargy that can occur, such as when rolling onto a roundabout in second gear at walking pace and suddenly demanding acceleration. This mode also gives an extra-extra torque overboost function, briefly putting 155lb ft at the disposal of your right foot. As ever, the six-speed manual gearbox has a slick and precise action, as does the clutch, making it easier to make the most of the Puma’s modest power delivery. 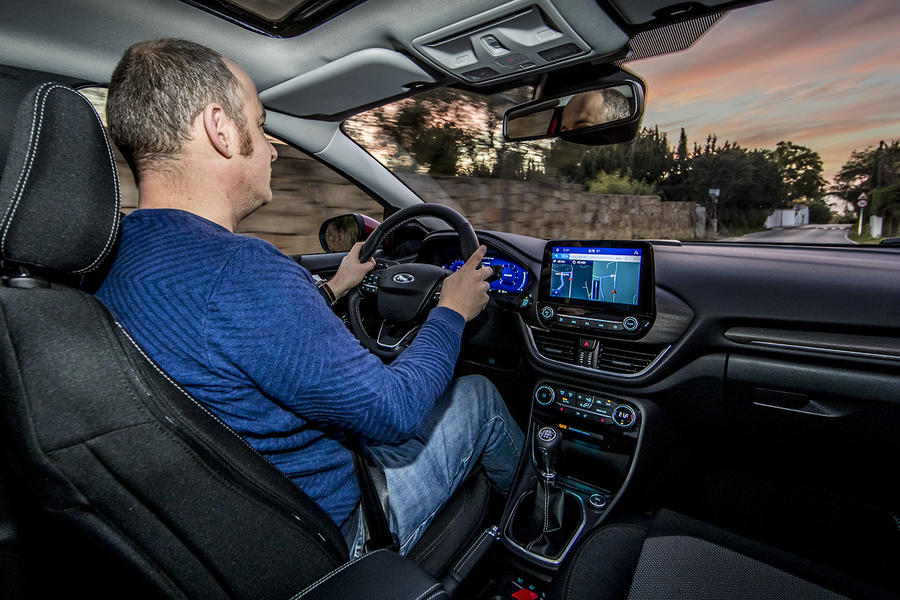 For pure driver enjoyment, the Puma leads the way in the compact crossover class. In terms of its ride and handling, it simply feels more engaging and more expensively developed than its rivals, even the pricier premium ones. Admittedly, this sector isn’t packed with high achievers, but that shouldn’t detract from Ford’s achievements in injecting some serious driver-focused fun into the Puma. And arguably the slightly softer Titanium’s well-judged blend of comfort and cornering prowess makes it even more appealing than the ST Line.

The rest of the car is isn’t up to quite the same standards as the chassis, but it’s more than good enough. The interior is inviting, plus it has all the current badges of acceptability in form of various active safety aids, a highly connected infotainment system and list of standard kit longer than your right and left arms combined. Plus, there are some genuinely neat touches, such as that Mega Box and seat trim that can be unzipped and washed following the inevitable accidents incurred during the course of frantic family life.

Like them or not, crossover models aren’t going anywhere in a hurry. With their raised driving positions and ability to project the image of a rugged and interesting lifestyle, their appeal remains undimmed for many. Accept that and the Puma is a welcome addition. Ford may have arrived late to this particular party, but it has used the extra time to finally deliver a class contender that people like us will actually want to drive. 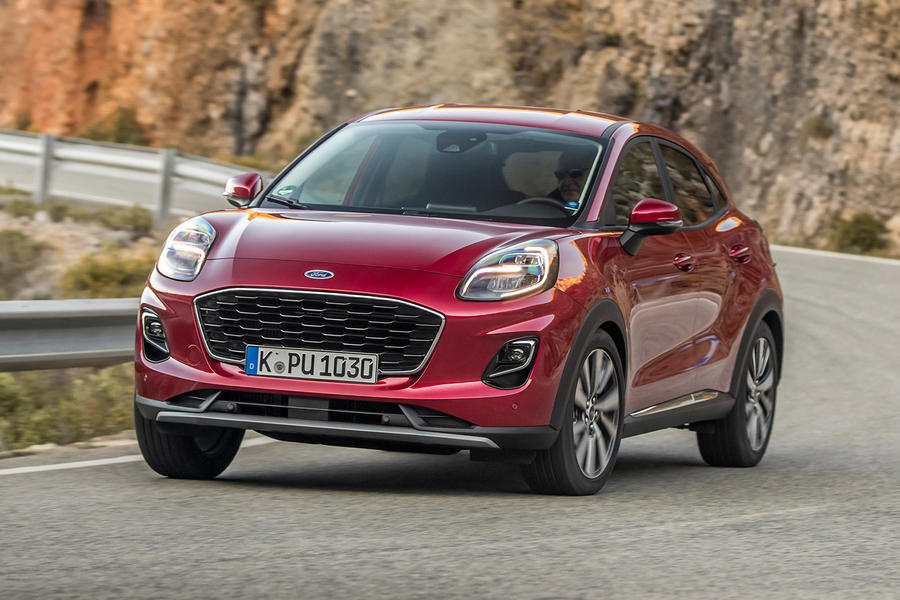