From £41,3309
Does this electric SUV bring a dose of on-road pizzazz despite its entry-level status?
Open gallery
Close

In the opening months of 2021, the entry-level member of the Mustang family is no longer a sleek, slightly agro-looking two- door coupé with a heavily boosted four-pot motor at its nose. Instead, it’s this: an electric four-door SUV that Ford calls the Mustang Mach-E Standard Range RWD. Bit of a mouthful, that; and an extremely vivid sign of the times.

You’ll have formed your own opinion by now on Ford’s decision to slap that fabled pony badge and nameplate on the Mach-E, so we won’t delve into that aspect in any great detail here. But if it means that we’ll live in a world where the full-fat, big-daddy V8 Mustang is around for a few more years, then I’m on board with that call.

This particular version of the new electric Mustang is priced from £40,350, or £37,350 once you deduct the government’s plug-in grant. Unlike the dual-motor Extended Range AWD model that we reviewed a couple of months back, this rear- driven version makes use of a single electric motor. It’s mounted at the back of the car and develops 266bhp and 317lb ft – enough to help this 1.9-tonne car accelerate from a standing start to 62mph in 6.9sec.

Power comes from a 68kWh (net capacity) lithium ion battery that is housed beneath the car’s floor and is good for a WLTP-certified range of 273 miles. That’s about 60 miles less than the range-topper, and 40 miles less than the new Volkswagen ID 4 First Edition – but still no bad showing. DC fast charging is possible up to a maximum of 115kW. 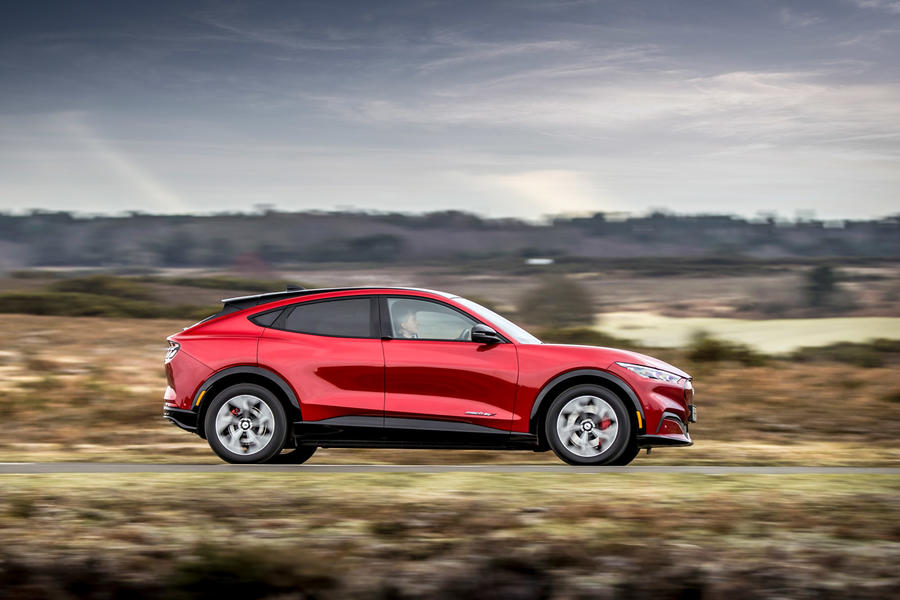 But enough stats. On to the driving experience. The cabin is typically Ford: plain, slightly unambitious visually and finished in materials that won’t ever really be distinguished for their tactility or premium appeal. But it’s spacious and the massive portrait touchscreen looks cool, even if it can be a faff to use on the move.

Of all the new-generation EVs that have emerged at the more ‘attainable’ end of the spectrum, the Mach-E RWD is up there with the very best for the way that it drives. For starters, it feels considerably quicker than its 0-62mph time suggests.

At least, it does between 20mph and 50mph. Pin the throttle and it takes off with fairly startling urgency, which tails off but still feels powerful as you home in on the national speed limit.

The one-pedal drive mode works really well, too. That’s good because the brake pedal itself takes some getting used to. It bites quite hard and very early on in its travel, which isn’t ideal around town or when you’re pushing things a little harder along a good road.

You’ll want to push it hard, too. Ford knows a thing or two about driver engagement and the Mustang Mach-E doesn’t come up short. True, it won’t mask its mass and size quite as effortlessly as, say, a Porsche Taycan does, but we’d never expect it to anyway. Its ride can also feel slightly lumpen at times, but it’s by no means uncomfortable and the way it handles makes up for any shortcomings here.

It steers and changes direction quite quickly, with appreciable energy and decent enough body control. Grip is good, although if you switch the traction control off, it’s possible to coax a degree of liveliness out of the rear end on the exit of a corner. This car is more fun than I thought it would be, even if you do need to warm up to it a bit.

Over the course of our 100-mile test route, which mixed a bit of town and motorway action with plenty of fast country roads, the Mach-E averaged 3.3mpkWh. That makes for a true real- world range of about 225 miles. 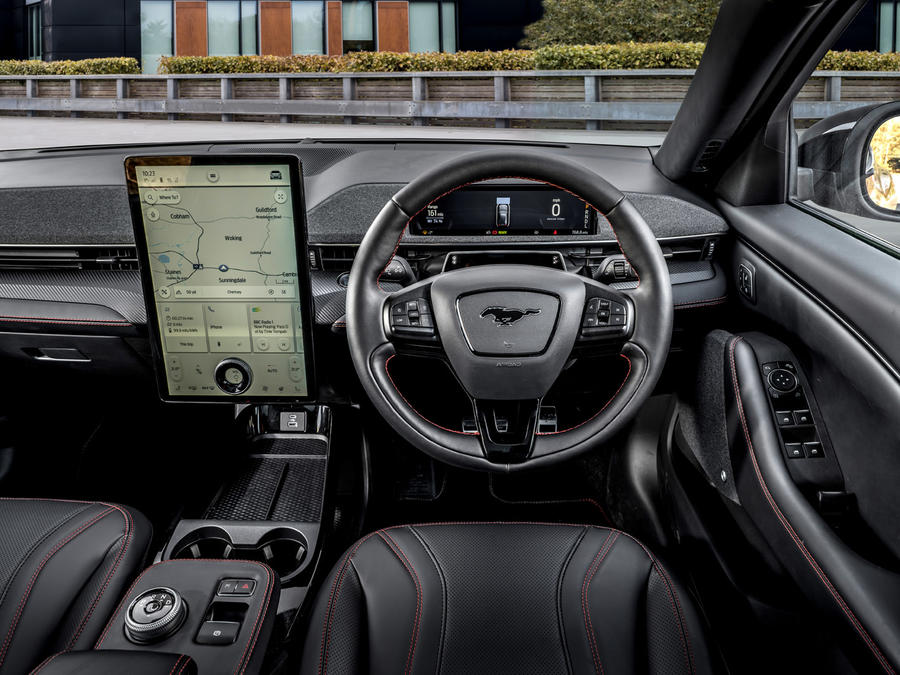 In fact, I’d be inclined to say that this entry-level Mustang Mach-E is probably the pick of the range.

I think it would handle in a more entertaining fashion than the heavier dual-motor car, and although the Extended Range RWD model might be able to travel further on a charge, it’s nearly £10,000 more.

This is by no means my favourite Mustang (that would still be the V8, obviously), but I can certainly see the appeal. It’s an affordable family EV for the keen driver, for sure. 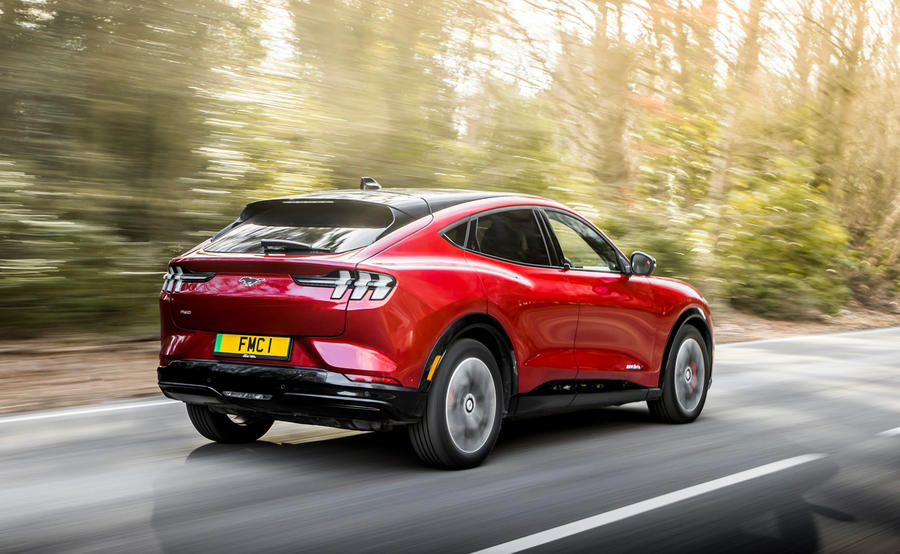 I have to disagree about the interior. I find Ford interiors over- not under ambitious. They are always heavily styled without looking expensive. The massive screen doesn’t look cool to me. It looks (and is) cheap. By having a single screen, the designer saves money on the different purpose-built instruments, and by sticking it on a stalk rather than integrating it, there’s greatly reduced need for cooling of the electronics when they are busy. An efficient solution then, in engineering terms, but poor ergonomically and sacrificing aesthetics on the altar of cheapness.

Very nice looking car, seen number of reviews that strongly liked how it drives, thus it appears clear it drives really nice - interior seems acceptable at this price; not after all sold at the prices the WAG empire is demanding for anything approaching being comparable.

The Apprentice 11 March 2021
Quandary... the extended range is the really interesting model with 379 miles WLTP range its the sort of range that would make it a very safe bet for me - I don't want to drive more than 340 miles (real world) in any day, but weirdly its 10 grand dearer for the extra 20kwh which is ludicrously expensive 4 maybe 5k I could live with but 10 is taking the piss.
inkpen 12 March 2021

Take the range figures with a pinch of salt. On a wet winter's day at motorway speeds, you'll more likely get 180 miles from the smaller or 220 from the bigger. On a dry windless summer day, you might get 250/300 miles at a constant 60mph. WLTP is bull - as it is with MPG for ICE cars.