Yet another all-electric crossover wouldn’t normally generate ripples, but what about one that has more torque than a Mercedes-AMG GT Black Series, that will out-drag the Porsche 911 GT2 of the phenomenal 997 generation and, of course, that can seat more people than both cars combined?

Given the same crossover also costs only what an Audi SQ5 with some options costs, it's worthy of discussion. This is the Ford Mustang Mach-E GT, which arrives to crown Ford’s range of electric family cars. It comes with four-wheel drive only, and while there exist lesser versions of the Ford Mustang Mach-E with two driven axles, those cars use a smaller motor at the front, whereas the GT totes the same powerful motor at both ends. The result is 480bhp with 634lb ft and one very carefully tuned ESP system, although there are other features unique to the GT.

The wheel and tyre package, which consists of EV-specific Pirelli P Zeros and intricate 20in alloys, is one of those features, but of even more significance are the multi-mode magnetorheological dampers and an upgraded Brembo brake set-up, which uses 385mm discs up front in an attempt to contain the monstrous 2198kg kerb weight.

There are also increases in negative camber at both axles and a 10mm drop in ride height, which along with the blacked-out ‘grille’ (gone is the body-coloured panel) and chin spoiler give the car an unmistakable stance. In searing Cyber Orange, our test car looked genuinely punchy, although Ford’s stated mission goes further than aesthetics.

Evidence of that can be found in a new drive mode known as Untamed Plus. It slackens the ESP intervention and also kills the short-term power boost function that can overheat the battery. The programme exists to make the GT more suitable for track driving, with freer handling and more dependable power output at the cost of lower peak power.

Overall, this car aims to solidly build on the encouraging dynamics of the regular Mach-E, rather than provide something purely for the speed junkies (although it absolutely does this, too, taking just 3.7sec to hit 62mph). The noble goal here is to make an everyday EV that’s really worth driving. 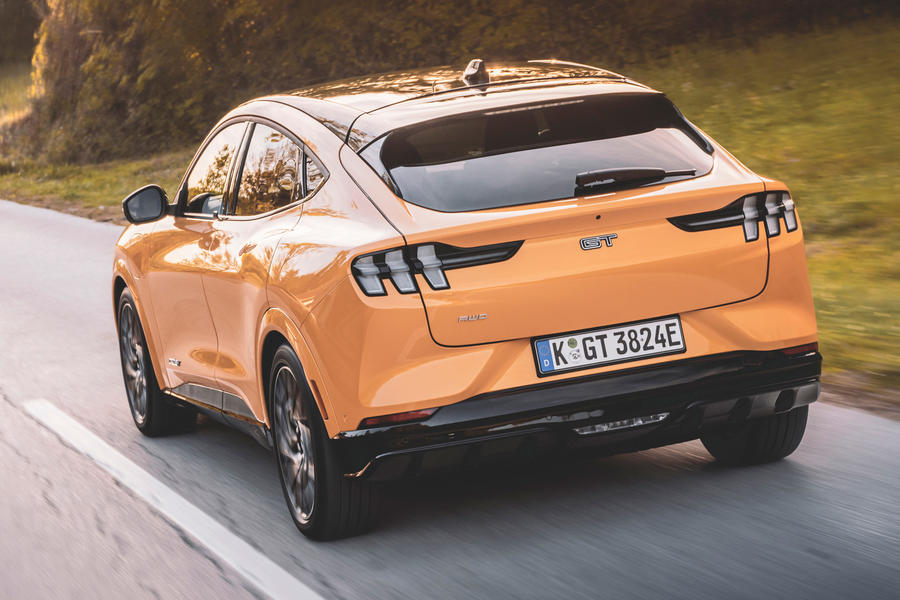 On the road, though, the picture is mixed. Let’s start with the good bits. The Mach-E is quick – not quite embed-your-spine-into-the-backrest quick but quick enough to drop any VW Golf R or even Mercedes-AMG A45 at speeds of up to about 65mph, when acceleration begins to tail off. Throttle response is also predictably crisp in any of the driving modes but especially so in the dubiously named Untamed, which maximises performance and response from the dual-motor powertrain.

The car has reasonably good breadth, too. It’s an affable motorway cruiser but on cross-country routes remains sure-footed with fine body control and good traction unless you properly provoke the chassis. Rougher patches of Croatian Tarmac do, however, suggest that British roads might not be particularly kind to this car, with the back axle feeling especially reactive and unsettled at times.

As for what this car does best, that is its adjustability. Rotating the GT on the throttle isn’t difficult thanks to its colossal torque output and electric motors that can summon that torque in its entirety just 0.5sec after you’ve requested it via your right foot. This easy adjustability exists despite the fact that the GT’s propulsive division of labour between the axles has actually been set up for a more neutral 40:60 split front to rear, compared with 30:70 for the regular AWD model.

And perhaps that’s just as well. The GT’s slips into oversteer smoothly but suddenly, which explains the draconian nature of ESP intervention. More finesse in the tuning and with it an ability to sustain gentle oversteer, albeit still within the reassuring confines of the electronic safety net, would immediately make for a more entertaining car.

Holding the Mach-E GT back is its steering. The pick-up is fine and the weight is natural enough by class standards, but the gearing seems to slow down once you’re into the meat of the corner. Why not take advantage of the car’s body control and give it the steering the pace this chassis could handle? As it is, the GT can often feel a little relucant to change direction and get its big snout hoving towards the apex.

Another frustration is that to access the car’s fun-loving oversteer balance, you need to be driving with quite some commitment. At lower speeds, and in slower corners, an understeer balance is dominant and it robs the car of the kind of low-level satisfaction you find with good sports saloons like the BMW 3 Series. Ford has near-total control of the division of power here, with torque vectoring by braking and independent electric motors, but it hasn’t found a consistent dynamic identity for the Mach-E GT, which seems to swing from feeling humdrum to wild and back again on a corner-by-corner basis. Hmm.

The regular Mach-E RWD also has a sweeter natural balance, although its more elasticated-feeling steering – familiar from ICE fast Fords – is also more of an acquired taste. In short, the GT is not necessarily the most satisfying car to drive in the line-up. 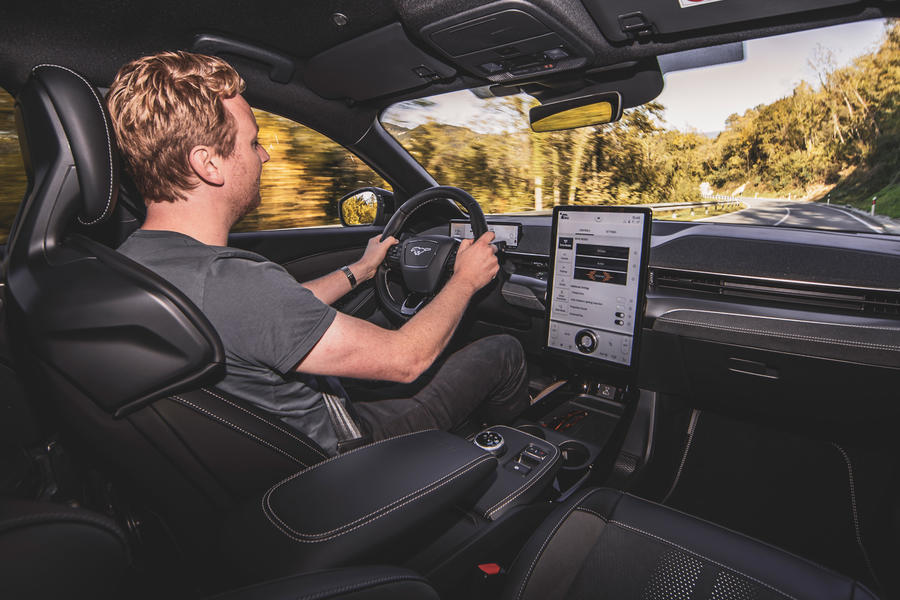 Clearly, there’s more to learn about this car than any brief drive, especially one on foreign roads, can convey.

With recognisable brand DNA in the dynamics, Ford feels on the right path to unlocking an EV that’s genuinely good to drive, much like Porsche has with the Porsche Taycan.

However, for all its performance and approachability, the £65,000 Mach-E GT doesn’t quite deliver like it could, and British roads may make life harder for it still. 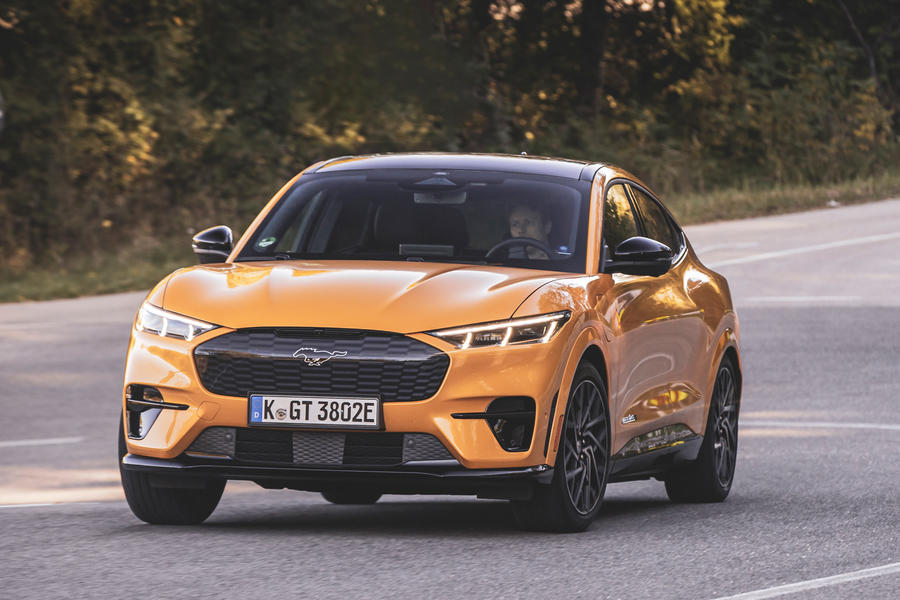 Imagine sticking a juicy na 5.0 ltr engine (550-600 bhp) in this, remove the heavy batteries and front motor. Put some classic dials. Improve the steering and up the quality with savings. Only then this SUV might come closer to its name or considered as a cheap URUS alternative

The weight is hardly "monstrous" - much the same as an SQ5 or Taycan, and rather less than the Audi e-tron. I am unconvinced about the interior though, I'd have to try it I suppose.

I agree with a lot of the comments about the Donk-E.  That interior is absolutely horrid and for £65k - it's absoultely ridiculous.