From £18,9959
Tuning specialist turns up the wick on Ford's hot supermini even further
Open gallery
Close

How much is too much? If you’re the engineering minds at fast Ford whisperers Mountune, then in fairness this question probably doesn’t really register, because when it comes to power (of the braked horse flavour), then you can never have enough. You want evidence? Look no further than the new M260 upgrade for the Fiesta ST.

Essentially the same set-up as the Essex tuner’s Puma ST, it comes hot on the heels of the M225 and M235 upgrades. As the name suggests, it boosts the 1.5-litre turbocharged triple’s peak power to 260PS, which is 256bhp in good old-fashioned money. That represents a 59bhp increase over the standard car and an extra 24bhp over the M235. The torque has been turned up, too, with a chunky 269lb ft now on tap at just over 3000rpm - although large wads of that figure are available from just 2000rpm. To put these numbers in perspective, the four-wheel-drive Toyota GR Yaris musters just 2bhp more and is 3lb ft shy of the Fiesta’s total twist action.

As with the lesser-powered versions, the M260’s extra urge has been liberated thanks to some careful software manipulation, which is downloaded to the car’s ECU using the firm’s Mtune Smartflash system. Simply plug the small Bluetooth dongle into the car’s OBD port, fire up the smartphone app and a few minutes later your Fiesta is a lot feistier.

Okay, that’s not strictly true, because to get the best out of the new mapping, you really need to change some of the hardware, too. For the sake of reliable performance in all conditions, the £675 microchip surgery should be bolstered by the addition of the brand’s bespoke £549 alloy intercooler, complete with the extra pipework (£165), as well as freer-breathing induction kit with performance panel filter (£239). Our car also had the £699 exhaust, which sits downstream of the catalyst and petrol particulate filter. Oh, and once all these bits have been bolted on, it’s important to remember that your fettled Ford should be fed only the highest-octane unleaded.

These modifications have been added to the firm’s M235 test car that we first drove last year, meaning that it also has a host of chassis and brake upgrades. Still not officially on sale, the suspension kit comprises 20mm-shorter springs that retain the original car’s stiffness, while the front brake overhaul adds 302mm discs and Brembo calipers for £1295. Inside, there’s the £99 short-shift arm for the gearbox, which reduces lever travel by around 25%.

Finally, to make sure nobody misses that you’re driving a saucier ST, there are some Mountune body stripes and rear spoiler extensions, plus a set of mud flaps that wouldn’t look out of place on the start line of the Grizedale or Sweet Lamb special stage. 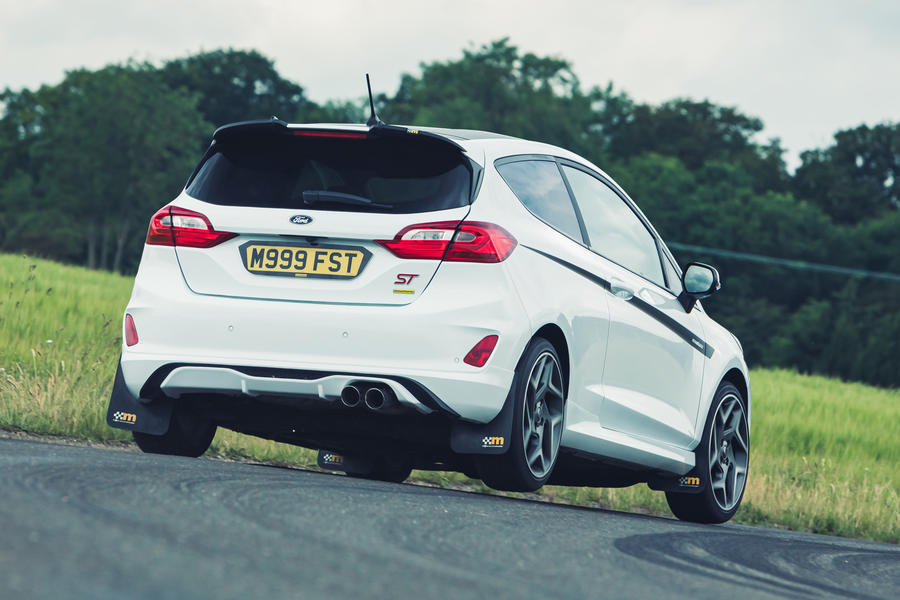 In a word, hilarious. In two words, flippin’ hilarious. Even in standard guise, the ST is never short of firepower, but this upgrade has turned the Fiesta into a rocket-fuelled hot hatch capable of taking the scalps of far pricier and theoretically more potent machines.

As with the M235, it’s the in-gear get-up-and-go that really grabs your attention, the Ford slingshotting out of corners with the sort of explosive energy that brings to mind images of an F4 Phantom being fired off the end of an aircraft carrier by its steam catapult. The three-pot engine’s boost builds quickly but progressively from just under 2000rpm and quickly gives way to a very quick wodge of mid-range pull that allows the ST to dart past slower traffic with little more than a quick squeeze of the throttle at any speed and in any gear.

Of course, you can wring the engine’s neck because, like the M235, it breathes better at the top end and goes harder (a 5.7sec 0-60mph sprint should be on the cards), plus it encourages you to indulge in the six-speed manual’s deliciously short-throw shift action. However, it’s better to change up early and ride the roller coaster of torque again, all the while taking immature delight at the cacophony of pops and bangs that are emitted from that twin-exit back box when Sport or Race mode are engaged.

Perhaps what’s most impressive is the chassis’s ability to cope with the increase in under-bonnet output. Being based on the Performance Pack car, this example has the Quaife limited-slip differential, which means traction is terrific out of tighter corners, even if cambers and surface changes can cause some energetic tugging at the wheel.

Quick, accurate steering and strong front bite mean it dives into corners with the zeal of a hyperactive puppy that’s downed a family-sized bag of Haribo, and once committed to the apex, you can tweak your line at will with little more than a lift or squeeze of the throttle, the Fiesta rotating elegantly around your hips. No, it’s not as absolutely fast, capable and controlled as the GR Yaris, but it’s arguably more engaging because that adjustability gives you options, even at relatively sane speeds.

Downsides? The lowered suspension certainly gives you less roll than the standard car, but it doesn’t feel quite as tightly tied down and gets just a little ragged when really pressing on. It’s as if the shorter springs aren’t working as harmoniously with the carried-over dampers. And the ride is still jarring at low speeds, although that’s to be expected, given that the stiffness remains unaltered.

It’s a similar story with the brakes, which, while ultimately strong, suffer from a longer pedal travel and appear to activate the anti-lock system earlier than the standard set-up, the increase in power perhaps too easily overwhelming the otherwise sticky purchase of the Michelin Pilot Sport 4S rubber.

Fortunately, our experience with the Puma M260 suggests that the Fiesta’s standard suspension and brakes are well up to the demands of muscle-bound engine upgrades, so unless you want the more menacing looks of the lowered stance and are likely to spending a lot of time attacking braking zones on track days, then the factory-specification hardware should be just fine. 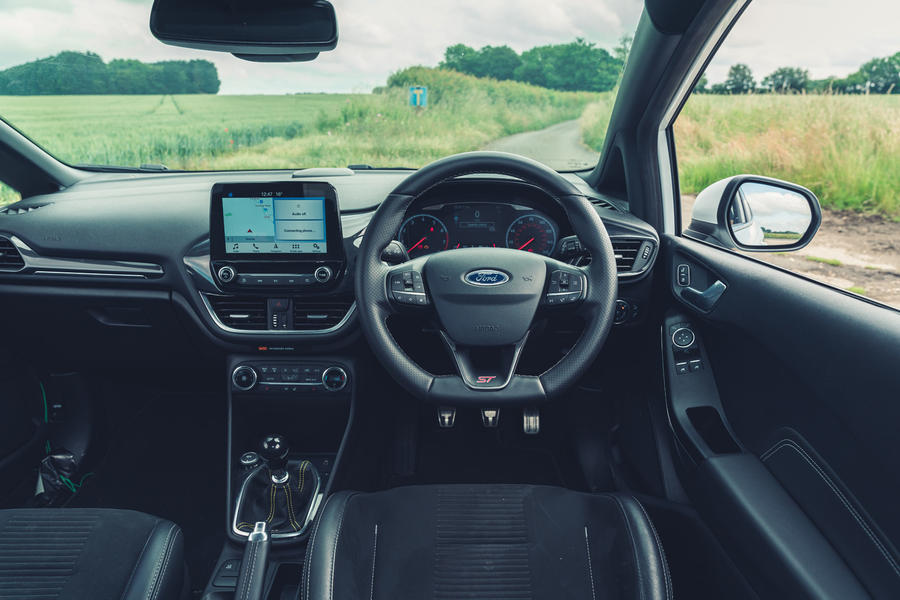 The gains over the M235 are relatively small, but there’s enough extra performance on offer that, if you’ve already got that upgrade, forking out an extra £99 really is a no-brainer. However, it’s worth bearing in mind that to get the most out of it, you’ll need to fit all the extra hardware, too. (The M235 requires only the addition of the induction kit.)

Still, even if you shell out for the whole shebang, you’re looking at an extra £1628 (we’d probably add another £599 for that burbly exhaust) on top of the price of a Fiesta ST, which isn’t an outrageous amount for a characterful and playful car that, on dry roads at least, will do its very best to keep a Toyota GR Yaris honest, even if it will ultimately have to give best to the Japanese wonder. 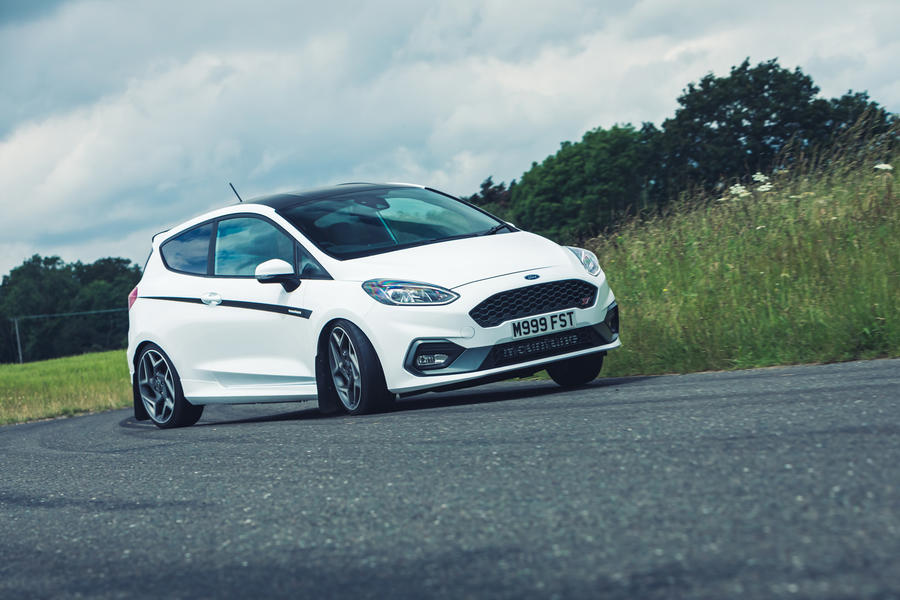 Seems the sensible choice is to take added power with standard suspension. Unless person intends to do track days regularly and knows every corner on every a road police may hide.